The new "Phobos-Grunt" will be half the price of its predecessor. 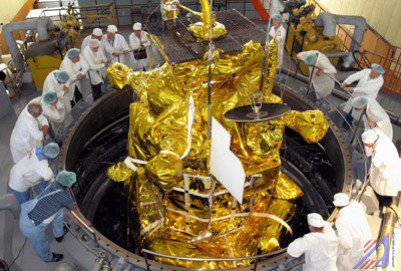 The new spacecraft, called the Phobos-Grunt-2, and similar to the crash victim in November 2011, is expected to be sent to the satellite of Mars in 2018. This was announced at a press conference by Academician Lev Zeleny, Director of the Space Research Institute (IKI) of the Russian Academy of Sciences (RAS).


According to Green, the academy put forward a proposal to purchase this unit in 2018 for several reasons. First, this year there will be a “good opposition of Mars and the Earth” (the planets will be at a minimum distance), and, by that time, experts believe that the capabilities of the Russian industry will significantly improve. The mission to Phobos - the natural satellite of Mars - is supposed to be simplified.

According to Green, the simplification will be expressed in the fact that “they will retain the control system of the upper stage“ Frigate ”, which has proved itself from the best side (in the first device, installed the control system on the device). In addition, the spacecraft will be installed on the spacecraft, which are used to study the moon. By the time of launch, they will work out on research projects of the natural satellite of the Earth. Some instruments for Mars exploration, previously installed on the first Phobos-Grunt, according to Green, can be placed on the vehicles of the European Space Agency. It will also reduce the cost and simplify the second mission to Phobos.

The cost of the second unit, according to Green, will be “a little more than half of the previous costs,” since the infrastructure has already been created for the first mission. However, the academician did not name the exact cost. “I am not an economist, and then a billion rubles today will not be a billion rubles tomorrow,” said the academician.

According to experts, the first mission was spent 5 billion rubles.

“We felt that the Phobos-Grunt apparatus in 2011 was not ready for flight, but it was simply impossible to raise the question of transfer,” admitted Green. “The next window in 2013, the unit could not fly to Mars, and all systems by the 2016 year (the third window) will become obsolete.”

Green also told why the second mission to Phobos will be carried out no earlier than 2018. The next “window” for launch will be opened in 2013, but it is very bad (there is a long distance between Mars and Earth and the device may simply not fly). In addition, two years - “not enough time to repeat such a project.” A good “window” will be in 2016, but lunar projects are planned for this time, so industry and the state will not have the strength and resources to simultaneously carry out several large missions, says Green.

The Phobos-Grunt automatic interplanetary station launched 9 on November 2011 into a low near-earth orbit. In Mars orbit, the station was to remotely investigate the planet and land the landing module on Phobos. At the end of the mission with the breakdown of the soil, it was supposed to go back. However, after the launch, due to the failure of the main engine, the station could not reach the flight path and remained in near-earth orbit.

The wreckage of January 15 station fell to Earth. According to the Ministry of Defense of Russia, the fall of the unburned fragments of the interplanetary station “Phobos-Grunt” occurred in 1250 kilometers west of the Chilean island of Wellington in the Pacific Ocean.

Vladimir Popovkin, head of the Federal Space Agency 31 in January, said that the accident occurred as a result of the impact of heavy charged substances from space on the station's likely counterfeit chips.
Ctrl Enter
Noticed oshЫbku Highlight text and press. Ctrl + Enter
We are
In 2018, the new "Phobos-Soil" can be launched to MarsUS classified data on the fall of "Phobos-Grunt"
15 comments
Information
Dear reader, to leave comments on the publication, you must to register.