Arsenal with a beard

January 21 2017
11
Brexit pushed the same passion over the independence referendum of Scotland into the background, thanks to the sober-mindedness of the local electorate, which still preserved the integrity of the United Kingdom. But such an outcome prevented the geopolitical drama associated with the possible collapse of a nuclear power. There is a precedent - the collapse of the USSR.


The nuclear power of Britain is several times inferior and inferior to the forces of the Soviet Union (Russia) and the United States. Nevertheless, Albion has the potential to cause unacceptable damage to a potential enemy. In creating and improving nuclear weapons, the British relied on US assistance. No one else has the Americans provided legal support in the development and expansion of nuclear weapons, except for the British. The action of the Anglo-American cooperation agreement in this field (Mutual Defense Agreement - MDA), signed in 1958, is extended to 2024.

The idea of ​​acquiring an atomic bomb was approved in December by 1941-nd by Prime Minister Churchill, who received a proposal for joint development a month earlier from US President Roosevelt. They agreed not to use nuclear weapons against each other. weapons, keeping information about him in secret from third countries and about the direct participation of British scientists in the Manhattan project, successfully implemented by 1945. However, the following year, cooperation ceased for some time, and in 1947, on the initiative of the new British Prime Minister Attlee, the British started an independent nuclear project.

The country's first-class research and production potential and the experience of participating in the Manhattan project allowed the first nuclear test to be carried out on October 3 1952 in the waters of Trimouilly Island off the northwest coast of Australia.

If the United States and the USSR in the first tests blew up nuclear charges in special towers, the British placed it in the hold of an anchored frigate Plym. Moreover, the guard himself delivered his death in the past, having made the transition with the top-secret cargo from England. The explosion pulled into 25 kilotons, the British coped with the task no worse than the Americans in Alamogordo and the Soviet scientists near Semipalatinsk. 28 on April 1958, the strategic bomber of the Valiant Air Force, dropped the first full-scale hydrogen bomb over Polynesian Christmas Island (operation Grapple Y - “Fight Wye”). The energy release during the test was 2 MT.

In 1952 – 1991, the UK conducted 45 nuclear tests: 21 in Australia and the Pacific, 24 in the United States. Among them were rather unusual: 9 of October 1957 of the year at the Maralling testing ground in Australia, a charge of 25 kilotons was blown up, suspended under three balloons at an altitude of about 300 meters (Antler's operation - “Antler”). 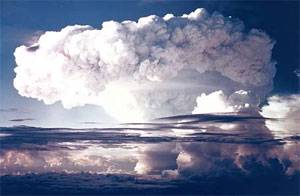 The first nuclear bombs to enter the strategic arsenal in 1953 aviation UK, became the Blue Danube ("Blue Danube") with a capacity of 15 kilotons (in the latest samples brought up to 40 kilotons). These plutonium and uranium-plutonium products were structurally similar to the American Fat Man (“Fat Man”) dumped on Nagasaki. However, the British bombs were distinguished by an elongated pointed shape, which, according to the creators, increased the accuracy of the bombing. 20 Blue Danube were in service until 1962.

The “Blue Danube” was followed by the more advanced Red Beard (“Red Beard”) with a capacity of 5–20 kilotons (in the years 1961–1971 in the arsenal of the British Air Force and Aviation fleet there were up to 110 of these bombs), as well as the 400-kiloton thermonuclear Yellow Sun ("Yellow Sun") Mk1. They were released a little in 1958, which is associated with the launch of the Yellow Sun Mk2 modification with a charge of 1 MT. About 150 of these bombs replenished the British nuclear arsenal in 1961 and remained in it until 1972. Then, from 1966 they were replaced by thermonuclear WE177s with a variable power from 0,5 to 450 kilotons. They existed in tactical, strategic and anti-submarine variants. And they served 32 years. Perhaps their prototypes were the American B61 and B57. Great Britain allegedly did not produce more nuclear and thermonuclear bombs.

On every brave enough air defense

The first British strategic carriers of nuclear bombs in the 50 were the pre- and near-sound turbojet bombers of the V-Valiant ("The Brave"), Victor ("Winner") and Vulcan ("Vulcan") families. The speed of the last, the most perfect of the three, reached 1200 kilometers per hour, the practical ceiling was 19 thousand meters, the maximum flight range was 7650 kilometers. However, the development of Soviet air defense made it difficult for such aircraft to break through to targets. Therefore, for the Victor and Vulcan bombers, they created a Blue Steel (“Blue Steel”) air-to-air cruise missile with a range of 200 kilometers and equipped with a powerful Mk28 thermonuclear charge. The British Air Force believed that Victor and Vulcan, each carrying one Blue Steel, should not get into the affected area by the Soviet C-25 and C-75 air defense systems when entering the launch line. However, this did not guarantee their invulnerability from the mid-range 60-s of the distant locking supersonic interceptors Tu-128, whose missiles (air-to-air Р-4) could destroy British vehicles even before they reached the launch position. In 1962 – 1970, the British Air Force had 40 Blue Steel ready.

Other aviation carriers of British nuclear weapons of the time — Canberra subsonic tactical bombers and Buccaneer deck-attack aircraft, were also vulnerable to Soviet air defenses. This forced the British to reconsider the program of developing the SNF in favor of ballistic missiles.

Armed to the "Tridents"

Taking into account all the circumstances, London chose atomic submarines with ballistic missiles. They were recognized as the least vulnerable component of the SNF. Four Resolution-type boats (“Resolve”) were built in the 1967 – 1968, each received the American RNPD 16 Polaris A3T with three combat fusion units of dissipating type with a power of 200 kilotons. In total, for SSRBs of the Resolution type, 144 combat units have been released.

Then, according to the secret Chevaline (“Horse”) program, the British replaced the W58 type with six new, individual TK-100 units with 50 – 100 kiloton charges on these missiles. For them, developed and means to overcome the missile defense of Moscow. The upgraded missiles were given the name Polaris A3TK (launch range - 3500 – 4000 kilometers).

Replaced the "Resolve" in the UK Navy came four SSBNs like Vanguard ("Avangard"). They are the only component of the country’s SNF. Each submarine carries a Trident-II D-16 (Trident) American intercontinental SLBM with a range of nine thousand kilometers. The rocket has 5 – 8 English thermonuclear blocks, the power of which in the 12 – 0,3 – 10 – 100 range of kilotons provides the choice of the most suitable for individual destruction of various security and area targets. Which guarantees unacceptable damage.