January 19 2017
20
210 years ago, 22 January 1807, the battle of Bergfried occurred. It was one of the battles of the war of the fourth coalition between the French and Russian troops before the decisive battle between Napoleon’s army and the Russian imperial army of Count L. L. Bennigsen.

Having received the first news of the movement of Russian troops, Napoleon Bonaparte at first decided that this was not the whole Russian army. He considered that the Russians had decided to cover Koenigsberg with one of the buildings, which was a logical decision. However, the General Staff ordered the troops to increase precautionary measures. When it became known that Bennigsen was going with the whole army, Napoleon decided to go around the left wing of the Russian army, cut off the enemy from Russia and press it against the Vistula. A decisive victory over the Russian army promised victory in the war. The French emperor ordered the corps of Ney and Augereau to concentrate between Mlava and Neidenburg; Soult, Davout, the Murat guards and cavalry assemble at Willenberg; Bernadotte go to connect with Ney. Allenstein was supposed to be the gathering center of the French army. Davout Corps remained on the extreme right flank of the French army.

At the same time, Napoleon secured the rear and flanks of the French army. He ordered General Savary, who was replacing the diseased Lanna, to observe the corps of Essen and cover the Warsaw area. Also, the French continued to work to strengthen Pultusk, Serock, Warsaw and its suburb of Prague. Marshal Lefevre, with German and Polish troops, was left at Thorn.

On January 15, Napoleon delivered a guard from Warsaw and 19 arrived in Willenberg. 20 January, French troops continued to move. Napoleon still believed that the Russian army continued to move to the Vistula, facilitating the operation to encircle the Russian troops. However, the Russian command found out about the plans of the enemy. The departure of the hussars of the Elisavetgrad regiment intercepted and brought to Prince Bagration (he commanded one of the forward detachments) a French staff officer, who was sent by the head of the French General Staff Marshal Berthier to Bernadotte with an operational plan. General Bagration sent the papers and the captive to Bennigsen.

Soon the Cossacks seized another French courier, who also carried Bernadotte's paper with a plan of operation. Having received confirmation of the French offensive, Bagration began to withdraw in order to get closer to the main forces of the army. At the same time, the prince ordered an increase in the number of bonfires in order to assure the enemy that the Russians retain their former location. He also instructed the head of his avant-garde, Yurkovski, to attack advanced French posts in order to convince the enemy to continue the offensive movement of the Russian army. After several demonstrative movements, Yurkovski was supposed to connect with the detachment of Bagration. Military trick failed. Bernadotte, having received no instructions from Napoleon, decided on the activity of the Russians that the enemy was continuing the offensive and decided to retreat from Lebau to Thorn, following the previous order of the French emperor.

After receiving the enemy's operational plan from Bagration, Bennigsen on January 20 ordered all the corps to assemble at Jankov. Barclay de Tolly was instructed to restrain the enemy, giving the Russian army to gather at Yankov. As the troops arrived at Yankov, Bennigsen put them in position. The left flank of the Russian army was provided by a detachment of Count Kamensky (Archangelgorod, Uglitsky and Tenginsky infantry regiments, 9 battalions with artillery), which occupied the ferry at Bergfried on the Alla River. The river was not frozen and therefore kept the value of the obstacle. The bridge was not destroyed, and one battalion of the Uglich regiment was deployed on the right bank of the Alla River.

By January 22 all the troops arrived, except for Lestok’s corps. The units of Bagration and Barclay de Tolly arrived, which for two days were held back by the advanced forces of the enemy. Especially distinguished in these fights Izyum Hussars, 3-th and 20-th chasseurs regiments, horse artillery company Yashvilya. “Commendable,” wrote Barclay de Tolly, “both the great harmony and obedience of the troops, as well as composure and presence of the spirit of the commanders. Attacked by the enemy, the four of the strongest, they everywhere met him bravely. ”

Napoleon was surprised that the Russian army, which, in his opinion, was on the march to the Vistula, is at Yankov's stand and is ready for battle. He began to build up troops in battle formation and ordered an offensive to start: Ney's corps was located in the center, Ozhero's troops were on the right wing, Murat's guards and cavalry were in reserve. The left wing was to form the body of Bernadotte. However, Bernadot, not having received instructions from the General Staff, did not come; he was already far away from the main forces on the road to Thorn. Napoleon also ordered Soult and Davout to bypass the positions of the Russian army from the left flank, descend the Alla river, take the ferry from Bergfried and hit the enemy in the rear.

For most of the day, January 22, both armies were preparing for battle. The French corps, which were supposed to attack the army of Bennigsen from the front, were moving to places designated for them. Front chains fired. Meanwhile, the cavalry of Soult's corps in the 3 hour went to Bergfried, where the battalion of the Uglich regiment from the Kamensky detachment stood. The French cavalry rushed to the attack, but was repelled by rifle fire. The French tried to reach the village in order to cut off the Russian battalion from the bridge and the dam. The Russian guns on the bridge grabbed this attack with a canister. After that, the Russian battalion retired to the other side of the river.

Soon the main forces of the Soult Corps came to the battlefield. French artillery opened heavy fire. However, the enemy fire could not bring much harm to the Russian troops, who stood behind the slope of the hill. After some time, one French column went on the attack. Under the fire of Russian artillery, coolly and quickly the French crossed the bridge and attacked our guns. Count Kamensky led his soldiers to bayonet attack and knocked over the front ranks of the enemy. The French ran, but were stopped by reinforcements sent by Soult. A congestion has formed. Some French sought to pass the bridge forward, others to go back, fighting off the Russian soldiers. In a brutal fight they fought with bayonets and butts. As a result, the French could not stand it and fled, the entire crossing was littered with bodies. In the heat of persecution, one of the grenadier companies of the Uglich regiment crossed the bridge and was met with strong fire, with heavy losses she returned.

Bennigsen sent Kamensky reinforcements and ordered him to stay at whatever cost until the night. In the evening, Soult again threw troops into the attack. Bearing heavy losses, the French passed the bridge and rushed to our positions. Russian troops counterattacked and hit the bayonets. After a hard fight, the French retreated again. At night, the French troops stopped the battle, the crossing was left for the Kamensky detachment. The losses of the Kamensky detachment under Bergfried were about 800 people. 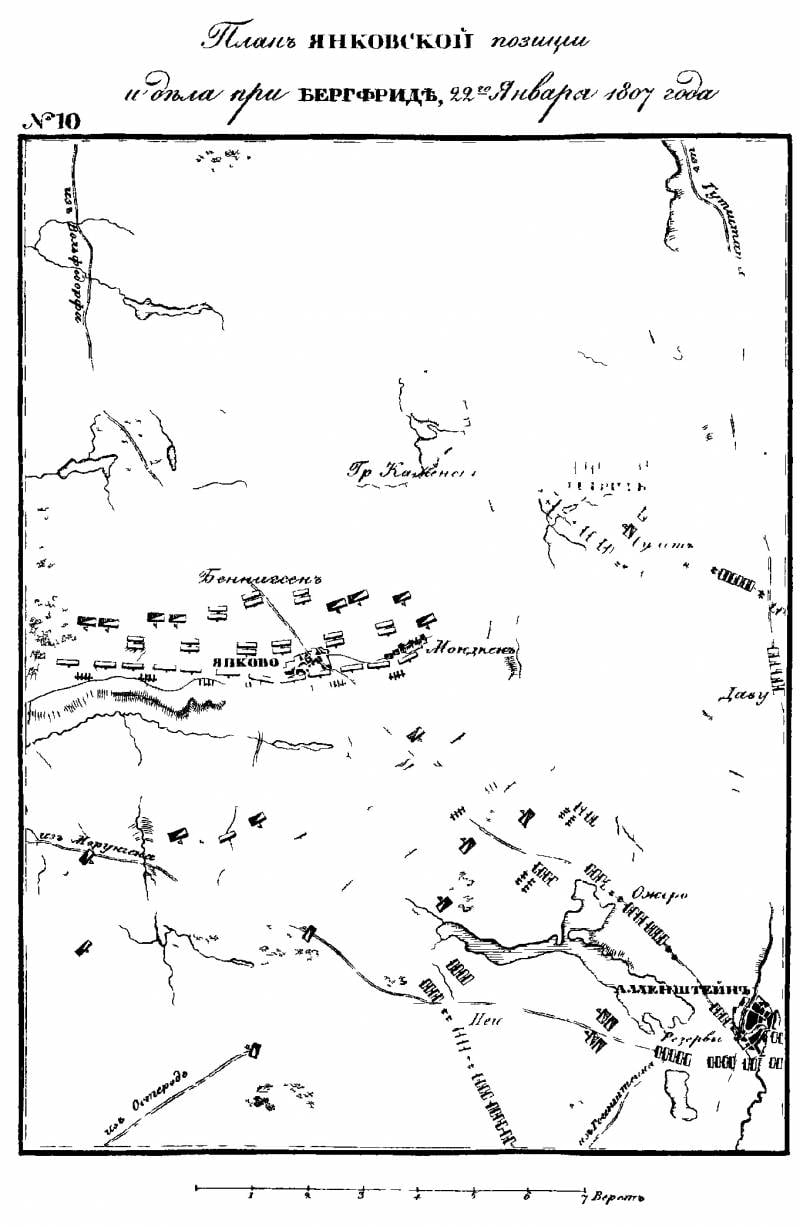 The French commander in chief did not attack the main forces of the Russian army that day. The case was limited to a rifle shooting of advanced chains and artillery shelling. The French troops were very tired by the reinforced marches in the preceding days, they slowly walked along snow-covered fields and ravines, and only in the evening took the indicated positions. As a result, Napoleon Bonaparte postponed the decisive battle the next day.

Lestoc's corps did not arrive. Lestok, fearing to be between the French troops, wrote to Bennigsen about the impossibility of going to Yankov. Bennigsen decided to avoid the battle and gave the order to retreat the army on the night of January 23 to the north (on Preussis-Eylau). The movement of the army took place in difficult conditions: deep snow, bad roads and forests. Troops mixed up, guns and wagons stuck. Bennigsen appointed Prince Bagration, the commander of the rearguard. 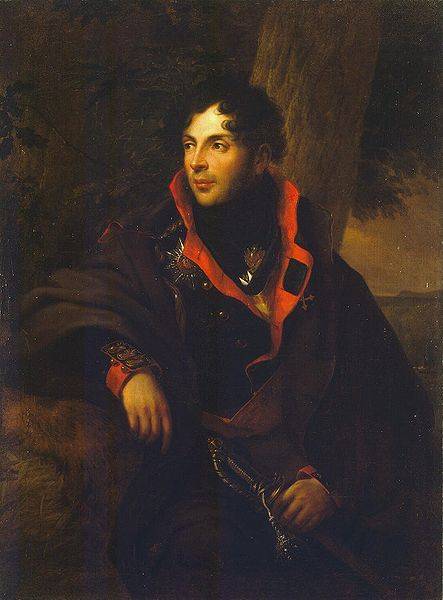 Russian-Prussian-French War 1806 – 1807.
As a military psychosis led Prussia to a military-political catastrophe
How Napoleon destroyed the Prussian army
Campaign in Poland. How Napoleon tried to crush the Russian army
Battles at Sokhochin-Kolosomb and Charnovo
The victory of the Russian army in Pultusk
Battle of Golymin
Start of the 1807 campaign of the year. Battle of Morungen