Estonia, it’s time to apologize to Russia for Tartu peace 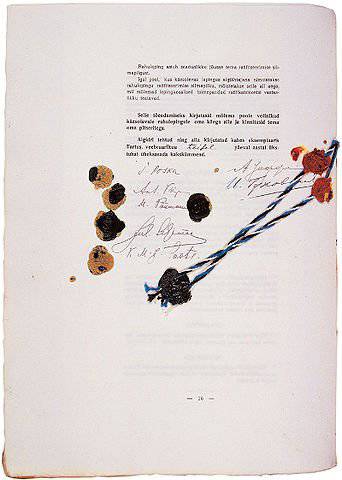 2 February 1920 was signed in the Estonian city of Tartu (Russian Yuriev) by the Tartu Peace Treaty between the RSFSR and Estonia. The agreement was signed following the war (from 28 in November 1918 of the year to 3 in January of 1920), in which the armed units of the self-proclaimed Republic of Estonia with the participation of the White North-Western Army, the Finnish, Swedish and Danish volunteers, the British Navy fought with the Red Army. On the part of Russia, the agreement was signed by Adolf Joffe, and on the part of Estonia by Jaan Poska.

According to this agreement, Soviet Russia waived any rights to the Republic of Estonia, including property rights, and was the first to recognize Estonia at the legal level. It was the first peace treaty concluded by Moscow during the Civil War, therefore it was perceived as a “breakthrough” of the international blockade of Soviet Russia (during the Civil War, Russia underwent the intervention of the forces of the then world community). Under this agreement, the Pechora Territory withdrew to Estonia (in 1945, it was returned to the Pskov Region), the territory on the right bank of the Narva River (now it is the territory of the Leningrad Region of Russia). In addition, the Republic of Estonia was exempted from any obligations to Soviet Russia, from the imperial government’s debt obligations, received tons of gold from 11,6 Russian gold reserves (15 million rubles in gold) from the Russian gold reserve and received 1 million acres of forest in concession. The Estonian side has pledged not to present any claims to Soviet Russia arising from the fact of its former presence in the Russian Empire.

The agreement also includes other points: refusal to have warships on Lake Peipsi and Pskov; a ban on the presence on the territory of each of the countries of the armed forces, organizations and groups that aim at armed struggle with the other contracting party; states at war with the other side were prohibited from military transit. Both contracting parties undertook to inform each other about the state of non-governmental forces, military depots, military and technical property located on their land, as well as to return the internees to their homeland and exchange prisoners of war. Soviet Russia returned to the Republic of Estonia all kinds of values, archives, documents, materials having scientific or historical value exported during the First World War to Russian territory. Countries established not only diplomatic relations, but trade and economic (moreover, on the basis of the most favored nation treatment). This agreement ceased to be valid in 1940 due to the admission of the Republic of Estonia to the Soviet Union.

In modern Estonia, this treaty is considered a symbol of independence, "the fruit of the efforts of the whole people." But if you look at the events of that period, it can be concluded that the actions of state figures of the young Republic of Estonia can be equated to a conscious genocide directed against the fighters of the White Guard North-West Army Yudenich and Russian refugees. Yesterday's allies in the fight against the Red Army, the Estonians not only deceived and sold for the opportunity of profit on the Bolshevik government of Russia, but also used the surviving soldiers as forced labor. In addition, in modern Estonian historical science and politics, this tragedy of the Russian North-Western Army is deliberately hushed up by state historiography. Estonian politicians and historians pretend that the Estonian army and its Western allies have borne the brunt of the fight against the Reds.

As a result, Estonian statesmen actually committed a double meanness: in 1920, they cynically betrayed the Allied White Army, and at the present time they pretend that they don’t know anything about this tragedy.

It should be noted that the Estonian state never existed, the territory of Estonia was from ancient times under the influence of the Russian state, then was captured by the Livonian Order, and the Swedish empire was taken away from Estonia. Russia received this land after the brutal Northern War in 1721, according to the terms of the Nishtadt world, and also paid 2 million gold thalers for it. Thus, these lands belonged to Russia quite legally. In the Russian Empire there were quite liberal living conditions, the process of formation of national intelligentsia was going on, as a result, by the beginning of the 20 century, the Estonian self-consciousness had grown to such a level that they felt like a separate nation. However, in Estonia, in contrast to Poland and Finland, there was no full-fledged national liberation movement, fueled by Russia's western "partners and friends".

After the First World War, according to the results of the Brest-Litovsk peace treaty, Estonian territory was occupied by German troops. 24 February 1918, when the Bolsheviks left Reval (modern Tallinn), the Zemsky council of Estonia who had gathered for an emergency meeting gave the highest authority to the Estonian Rescue Committee headed by Konstantin Päts and announced the “Manifesto to all the people of Estonia” (the so-called “Manifesto of independence ”), he declared Estonia an independent democratic republic and proclaimed its neutral status in relation to the Russian-German conflict. Although “independence” was fictitious - it was based on German bayonets. At the head of the "republic" even planted a German prince.

In the fall of 1918 the offensive of the Red Army began, only British intervention fleet saved the Estonian capital from the "red occupation". England and Finland rendered considerable assistance to the young state not only by direct force, but also by the supply of arms, ammunition and food. In fact, the Estonians again changed their master (a revolution took place in Germany, the First World War was lost, the Germans were not in the Baltic States), they reoriented to the Entente.

By the beginning of 1919, the Red Army units occupied a large part of Estonian territory and were only 35 kilometers from Reval. In the subsequent hostilities, the help of the Entente and the white divisions played a large role (in addition, the Russians fought in the Estonian People’s Army, several divisions of the company and battalion personnel were created). The units of the Red Army were ousted from Estonia, and the white North-Western army twice launched an offensive against Petrograd. By mid-November 1919, the small White Guard North-West Army of General Yudenich was finally beaten off from Petrograd. It must be said that here, too, the Estonians played a negative role, and they unexpectedly threw the front. The White Guards thought to find a shelter in Estonia, and besides, they could count on a good attitude — the whites took an active part in liberating the Estonian land from the Red Army units. But miscalculated.

The defeated North-Western army and the refugees who went with it were interned (people were forcibly detained, deprived of their freedom of movement). Under the word "interned" lies the terrible tragedy of thousands of people. First, the refugees were starved and cold, not passing through the border. Then they disarmed, robbed, took away all valuables from people and confiscated all the property of the army. After that, de facto placed in a concentration camp (the premises of two empty factories), without medicines, food, warm things - in winter. The rearguard units of the defeated army were not allowed to enter Estonia at all, they were destroyed by fire from two sides. In a concentration camp, an epidemic of typhus began. Thousands of people died from it. The surviving men were almost slaves and sent to compulsory forest work, where they lived in the most terrible conditions. Such was the "gratitude" of the Estonian authorities to the soldiers who helped create the Republic of Estonia. To good, they responded with genocide.

Therefore, Russia needs to demand that the actions of the Estonian authorities of that period be condemned from modern Tallinn. Estonia should make an official apology to Russia, the descendants of those Russian people who died in 1919-1920 through the fault of the Estonian authorities. It is also possible to provide Estonia with an account on behalf of the relatives of the White Guards and refugees who died a terrible death through the fault of the Estonian government in those years.