January 19 2017
28
Relations between Serbia and the authorities of the so-called Republic of Kosovo have escalated. President Nikolic even threatened to bring troops into Kosovo and Metohia: "If they start killing the Serbs, then we will enter the army." Nikolic himself will go to war, he is "not the first time." 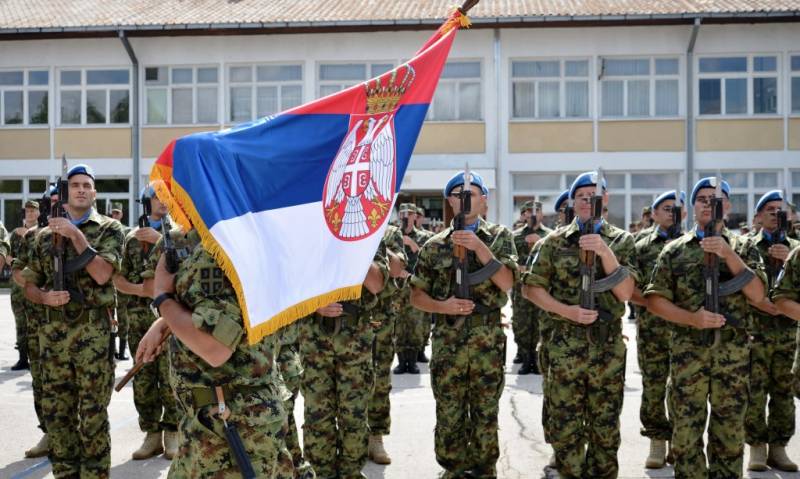 Recall, January 14 Kosovo Albanians did not miss the passenger train from Belgrade to Kosovska-Mitrovica. They didn’t like the name of the train: “Kosovo is Serbia”.

According to media reports, the train with the same name launched "Serbian Railways". The train to Kosovsk-Mitrovica should have finally connected the capital of Serbia by rail with the self-proclaimed republic. It was kind of a reconciliation gesture imposed on the parties by the European Union. For the first time from the Kosovo conflict at the end of the last century, the railway route connected two cities, now located on opposite sides of the border. However, the Serbs issued the composition in the colors of the Serbian flag, and the inscription “Kosovo is Serbia” was given in as many as twenty-one languages, including Albanian. Albanians really did not like it.

The Kosovo ruler, Hashim Tachi, immediately accused the Serbs of the alleged seizure of a part of the “republic” territories. In his opinion, Serbia decided to use the annexation of the Crimea to Russia as a model. According to Taci, the Belgrade train served as a provocation instrument for the Kosovars: a pretext was created for the intervention of Serbia and the subsequent annexation of the northern territories of Kosovo.

“Serbia’s intention was to use this train, donated by Russia, primarily to cut off the northern part of Kosovo and then attach it to Serbia. This is the Crimean model ", - quotes the policy Newsru.com.

Tachi wrote on a Facebook page that “Kosovo respects the freedom of movement of people and goods,” but at the same time “entering the train from Serbia with nationalist inscriptions that contradict the Constitution and laws of the Republic of Kosovo is completely unacceptable.”

The president of the “republic” also said that they included “officials from Serbia who did not have permission to enter Kosovo”. Thachi further called for preventing the train from moving.

The media noted that Kosovo-Albanian special forces forces had been brought to the Kosovo border with Serbia.

Kosovo Prime Minister Mustafa contacted the United States and the EU in order to "express concern." According to him, which leads «Medusa», the train stop was the right decision: “... they wouldn’t be allowed to enter the territory of the sovereign republic of Kosovo”.

The train sent from Belgrade on Saturday morning, the Serbs had to return: it was impossible to endanger the passengers.

Serbian Prime Minister Alexander Vučic on January 14 ordered to stop the train near the border with a partially recognized republic, explaining his decision by attempting to mine the Kosovo ethnic Albanians. According to Vucic, the Kosovo government was determined to arrest the driver and passengers. So the Kosovo authorities hoped to "provoke a conflict in the territory that we consider ours."

Having stood a couple of hours in the Serbian border town of Raska, the squad returned to Belgrade.

The next day, January 15, Prime Minister Vucic said that stopping the train helped to avoid collisions that would lead to "casualties on both sides." According to him, it was possible to save peace in Kosovo “thanks to the desire and wisdom of Serbia”.

Threats of Albanians about "not allowed to enter" shook the Serbian establishment. President Nikolic made it clear that the train incident and threats from Kosovo Albanians are convulsions of the outgoing Obama administration. He made this statement after the Security Council meeting.

“Although we tried not to show it, yesterday we were on the verge of a collision,” the president quotes TASS.

Tomislav Nikolic also threatened that Serbia would not allow a single Albanian to pass through its territory (they cross the country in thousands on buses on their way to the EU countries).

The president warned that the next Albanian provocation will end badly: “We don’t want clashes, but we will have to do not what we want, but how we should.”

He also said that neither the European Union nor NATO could provide a sensible answer to the relevant appeals from Belgrade regarding the incident.

In turn, the Serbian president threatened to send troops into Kosovo and Metohija if the Serbs living there were in danger. “If they start killing the Serbs, we will enter the army. And not only the army, we all go. I’ll go first, I’m not the first to go, ”Tomislav Nikolic quotes "Russian newspaper".

What threatens the region with such a rapid development of events? Elena Guskova, the head of the Center for the Study of the Modern Balkan Crisis at the Institute of Slavic Studies of the Russian Academy of Sciences, spoke about this to Rossiyskaya Gazeta

“I don’t remember other such harsh statements as what Serbian President Tomislav Nikolic did when he threatened to send troops to Kosovo if Albanians continued to threaten the Serb population living there,” she said. - The Serbian leadership signed an agreement with Pristina in 2013, the current Serbian President Tomislav Nikolic and Prime Minister Alexander Vucic, and the current head of the Serbian Foreign Ministry Ivica Dacic participated in this procedure. According to this document, a border was drawn between Serbia and Kosovo, border crossings were established, and Kosovo customs seals were introduced. The parameters of Pristina’s presence in the international arena as an entity independent from Serbia were determined. After all this, Kosovo began to feel like an independent state. Moreover, the Serbs did everything to support this feeling in Albanians. For several years now, Kosovo and the European Union have been waiting for Serbia to recognize the independence of the region, allow Pristina to become a member of the UN. ”

“In such a situation,” added Guskova, “the first train on which was written“ Kosovo is Serbia, ”with cars painted in the colors of the Serbian flag, with officials whom the Kosovo Albanians controlling the border do not want to let in Kosovo, caused discontent with the Albanians. After all, earlier Serbia did everything to make Albanians in Kosovo feel independent, sign all agreements. For the sake of fairness, I note that Pristina does not fulfill the agreement on granting rights to unite the Serb communities in Kosovo, delaying the negotiations. ”

“In Serbia, revanchist sentiments are strong, which now, of course, will intensify against the background of sharp statements by Tomislav Nikolic,” writes "Life" publicist Cyril Benedict. - Paradoxically, these sentiments coexist with the desire of the majority of Serbs to join the EU, that is, to receive European salaries and pensions. However, it is absolutely clear that “there’s no way to eat a fish and not to climb into a pond”: either European integration without Kosovo, or Greater Serbia and farewell to the dreams of a paradise in Brussels.

“There is no agreement at the level of political leadership: while President Nikolic threatened Pristina with war, Prime Minister Alexander Vucic ran to complain to Femdirke Mogherini’s Mommy (EU High Representative for Foreign Affairs), the author notes. “Mogherini commended Vucic’s desire to coordinate all the steps of Belgrade with Brussels, and even thanked him for“ taking the lead in these difficult times. ”

The failed train is an episode of Nikolic's preparation for the presidential elections, said Vadim Trukhachev, senior teacher of the department of foreign regional studies and foreign policy of the RSUH.

"Nikolic is preparing for presidential elections in Serbia, scheduled for spring," said the expert. "Free Press". - Protection of tribesmen in Kosovo (and Bosnia) has always been one of the cornerstones of his program, which is why he sent the corresponding train there ... In fact, today Serbia has no opportunity to send troops there: the West will not allow. The EU firmly makes it clear that it’s time for the Serbs to recognize Kosovo. Another thing is that in the north of the region there are still four communities inhabited predominantly by the Serbs. And if an aggravation occurs in them, caused by the Albanians' desire to cut them out, options are possible. ”

In the end, we add, the Serbian authorities decided to teach the mind ... the United States.

At a meeting with US Ambassador Kyle Scott, President Nikolic said that the United States had created a lot of problems in the Balkans and expressed the hope that the new American administration would not behave this way. “I understand that you unconditionally support something that you have directly influenced the creation of; You have created many problems by implementing your will, and I hope that with the advent of the new administration this attitude will stop, ”Nikolic said. TASS.

Russian Foreign Minister Sergei Lavrov spoke on the aggravation of the situation.

“Unfortunately,” the agency quotes him, “the Balkans more than once became the source of very serious conflicts. I am convinced that, although, as is known, история teaches that she does not teach anything, this time everyone understands the need to prevent violent confrontation, although tensions are growing there. ”

According to the minister, “these irritants” are largely “created by the policy of those who impose so-called European values ​​on all Balkan peoples in new, modern post-Christian packaging”.

Recall that at the end of the last century, the confrontation between Serbs and Albanian separatists from the so-called Kosovo Liberation Army led to the bombing of Yugoslavia by NATO forces. Later, in the spring of 2004, Kosovo Albanians staged mass pogroms, which resulted in the resettlement of Serbs from the province and the destruction of many cultural monuments. In February, 2008 Kosovo Albanians in Pristina declared unilaterally independence from Serbia.

22 July 2010 The United Nations International Court of Justice recognized the legality of the decision of the Kosovo authorities to declare independence of the province from Serbia. However, not all states participating in the UN recognized the self-proclaimed republic. The list of those who did not recognize it includes Serbia, Russia, China, Iran, Syria and other states. From 193 countries represented in the United Nations, its recognize for today 110. Meanwhile, in order to get a seat in the UN, a state must have the support of two-thirds of the United Nations Member States (129 of 193), and also secure the approval of the UN Security Council. This implies the absence of the veto of any of the permanent members of the Security Council.

Hence it is clear that the problem of the self-proclaimed territorial entity of Kosovo is practically insoluble.