If you start to lie, lie to the end

January 20 2017
31
On January 16, over US 300 marines arrived in Norway to complete a basic military training course. According to the representative of the Norwegian local defense forces, the US military will be deployed at the Vernes base in 1500 kilometers from the Russian-Norwegian border. 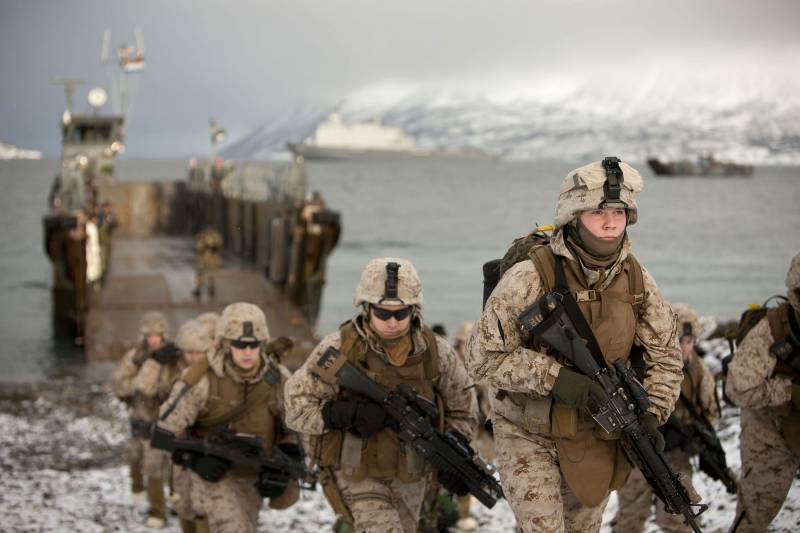 In March, infantrymen will take part in Joint Viking exercises along with British troops, which are part of a bilateral agreement between the countries. According to Reuters, the US military will remain in Norway for a year, and in six months one group will be replaced by another.

The Russian embassy in Oslo has not received any comments yet. However, in October 2016, when the first information about future exercises appeared, misunderstanding and discontent were already expressed. “If we recall the numerous statements by the official representatives of the Norwegian government about the absence of a threat from Russia, we would like to understand for what purpose Norway is increasing its military potential by accepting the US military in Vernes,” the representative of the Russian embassy said.

Since the middle of last year, the NATO leadership has consistently acted on two fronts. On the one hand, it puts pressure on European countries, scaring them with the “threat” from the Russian Federation. However, neither officials nor informational publications give any explanations on this matter. On the other hand, the bloc is building up its military presence in Europe, convincing everyone, including Moscow, that this has nothing to do with preparing for retaliatory measures in the event of aggression. There is no logic and interconnection between these two actions, but for the countries under the control of the alliance there are enough such arguments.

But, of course, the concentration of NATO troops near the borders of Russia needs something to be explained. At the Pentagon, this is called "rotation", but it is organized very ambiguously. “The so-called“ continuous rotations ”are planned in such a way that the units on duty will not leave the temporary accommodation places before the arrival of their shift staff,” said the representative of the Russian Foreign Ministry Maria Zakharova. “This is a long-term deployment of US forces and assets in Europe.”

The scale of these "rotations" is really huge. Earlier in January, an armored brigade was deployed to Poland, namely 4 thousand military personnel and 2,5 thousand units of military equipment, including 87 tanks, 144 infantry fighting vehicles and 18 self-propelled artillery mounts. In December 2016, the advanced US ground forces warehouse in the Netherlands was commissioned. The creation of similar facilities in Belgium and Germany is expected. In recent years, such NATO activity has had no precedent.

The behavior of the Russian government remains as neutral as possible: the inexplicable actions of the West were not awarded a response even in words. And therein lies a small discrepancy, which gives the true motives of the Americans with their heads: dozens, if not hundreds, of headlines appeared in the Western press, reporting “Kremlin irritation” caused by NATO’s peaceful teachings. Based on what such conclusions are made, if those who could express this irritation keep silence? There is no doubt that this is a primitive juggling of facts, the purpose of which is to make Europe, tormented by the economic crisis, the fuel issue and the endless stream of illegal immigrants, also be afraid of Russia.

Probably would have happened if Western provocations had led to the expected result. But by now this is not happening in the most successful way. However, the scenario is already nearing its apogee, and there are two possible options for development: either the exercises will take place, and then you have to think about what to do with the crowd of military personnel scattered throughout Europe, or America will continue methodically bringing people in uniform to the Old World, demonstrating the failure of its version about "rotations". But in the second case, the US will create a new problem for itself, because sooner or later people and equipment will have to be taken back.