Start of the 1807 campaign of the year. Battle of Morungen

January 18 2017
15
From the first days of 1807, the war between France and Russia was continued. The French emperor Napoleon, with his headquarters, stopped in Warsaw and was engaged in Polish affairs: he created the Polish army, on January 14 a decree was issued on the establishment of the Provisional Polish Government.


At the same time, Napoleon was struck down by the arrow of Cupid. Napoleon fell in love with Maria Walewska, the wife of an elderly Polish count, with whom he formed a long romance. True, military affairs tore him from his personal life. Twice Napoleon went to the army together with "his Polish wife," as he called Maria.

It is worth noting that the French emperor was in no hurry with the restoration of the Polish state. Napoleon came to Warsaw as a winner, the Polish regiments fought bravely for him, contributed to the victory over Prussia, and the Poles were waiting for his decision. But Napoleon hesitated, did not bind himself with direct promises. He used the Polish question against Prussia and Russia. However, the French ruler did not want for the sake of Poland to quarrel forever with the three great powers - Russia, Prussia and Austria.

Napoleon still held on to the idea of ​​an alliance with Russia. A number of circumstances, France was involved in the war with Russia. However, the French emperor wanted to achieve a military victory, and then make peace and an alliance with Russia. For this, he sent General Sebastiani to Constantinople-Istanbul, pushing Turkey against the Russians; General Gardan sent for the same purpose in Persia. Flirting with the Poles were subject to the same goal. Napoleon looked to the future, the war needed to be won, but after the war he needed an alliance and friendship with Russia. Napoleon, as in the days of Paul, and after him, wanted a strategic alliance with Russia. Therefore, he could not promise the Poles independence. An independent Poland would become a constant source of hostility with Russia. She would also have made impossible an agreement with Austria and Prussia. Napoleon hoped to stay in Warsaw until spring, but by the twentieth of January he had learned that the Russian troops had begun the movement, and hurried into the army.

At the beginning of 1807, instead of Count Kamensky, the Russian army was headed by General Leonty Bennigsen. The new commander-in-chief began an offensive movement in the direction of the mouth of the Vistula to prevent the French from entering Konigsberg and Pillau, which violated the overland route to Danzig and strengthened the position of the enemy in the Baltic. Königsberg was also an important base where military supplies and food were kept. The fall of the second capital of the Prussian kingdom deprived the Prussians of the last support base. 4 January 1807, the Russian army marched from Bialy. The hike took place in difficult conditions during winter blizzards. Three avant-garde under the command of Markov, Barclay de Tolly and Baggovut guarded the left wing of the army.

The first to discover the movement of Russian troops was Marshal Her. He, through General Colbert, offered the Prussian command a truce. However, the Prussian king refused to negotiate. 9 January, the Russian army was in Bishofshteyn. The Cossacks of the Russian avant-garde clashed with the French travels and foragers. From the prisoners, Bennigsen learned that Bernadot's corps was located in the Elbing area, and Ney's corps was 70 versts from it, in the Gutstat and Allenstein regions, and that both French corps were stationed quite far from Napoleon’s main forces. Bennigsen decided to take advantage of this, to separate the two French corps, then break one of them. Having sent forward detachments to disturb Ney's troops, Bennigsen sent troops to Heilsberg and Liebstat. Ney, preoccupied with the appearance of Russian troops, began to assemble his corps located in winter quarters. But the French did not yet know about the general movement of the Russian army.

The vanguard of General A. Markov went out to Liebstat and found a weak French detachment. For the attack, Markov singled out two battalions from the 5 th Eger Regiment and the Pskov Musketeer Regiment. The battalions were led by regimental commanders Gogel and Loshkarev (the future hero of the defense of Shevardino Redoubt). On the night of January 13, our troops reached Liebstatt and attacked the enemy. Taken aback the French resisted, but were overturned. The French fled the city, losing only prisoners to about 300 people. Our losses were 27 people. The French prisoners reported that they were part of the avant-garde corps of Bernadotte from the Pacto division, and that the French troops were marching towards Morungen. Markov continued on his way to Morungen, followed by General Anrep with several regiments of cavalry. 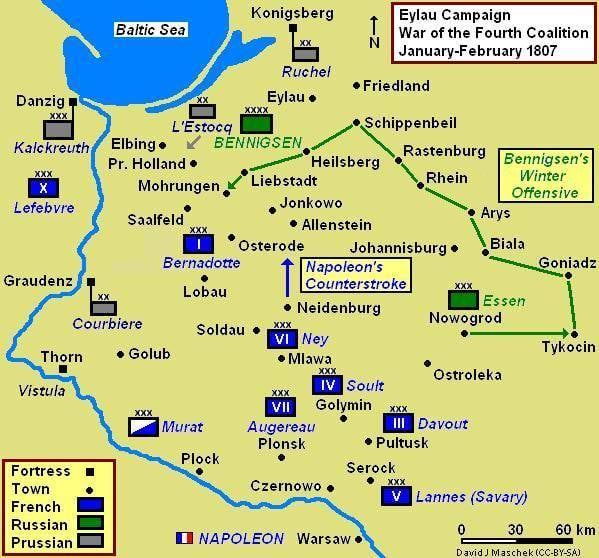 Bernadot, who was located in Elbing, received news of the movement of Russian troops. He reported this to Napoleon in Warsaw and decided to get close to the main forces of the French army, planning to contact Ney. Moving by reinforced marches, the main forces of Bernadotte entered Morungen.

Meanwhile, Markov went to the village Georgenthal. The Cossacks shot down a French picket standing there. The Russian general realized that he faced a numerous enemy. Markov went to the wooded-lakes defile between Morungen and Georgenthal and deployed his squad at heights to the west and south of the last point, at the front about three miles. In the forefront was the Elisavetgrad Hussars; the Pskov Musketeer Regiment is located on the right wing, the 25 th Chasseur Regiment is on the left; in the second line - the Yekaterinoslav Grenadier Regiment; the two battalions of the 5 th eger regiment were scattered with arrows in front of the position, the third battalion remained in reserve. Three battalions of the 7 th Chasseurs for the time being provided protection for the road at Georgenthal so that they could withdraw. Bernadot, who was in a hurry to gather his troops and concerned about the retention of Morungen, through which people and carts passed, decided to attack the Russians. Du Pont’s division marching from Elbing ordered him to go to Morungen and attack Markov’s right flank.

Bernadotte was waiting for the appearance of Dupont's division to launch a general attack. In addition, he sent a column to bypass from the left flank. Soon Dupont appeared on the Elbing road and attacked the 7 th Regiment of Chasseurs. This regiment suffered heavy losses at Austerlitz and consisted mainly of recruits, so it could not withstand the blow and began to withdraw. Markov strengthened the rangers with two battalions of the Yekaterinoslav Grenadier Regiment. In this regiment, there were still miraculous heroes of Suvorov, who fought against the Turks and the Poles. These veterans inspired their comrades and temporarily stopped the enemy.

Meanwhile, another French column circled our left. Bernadot began a general offensive. The onslaught of the French and the coverage of both flanks (first right and then left) forced Markov to begin the retreat at dusk. At this time, General Anrep arrived in the army, ahead of his unit. During the inspection of the position of Roman Karlovich Anrep received a mortal wound.

The French began to pursue the Markov detachment, but the report of the attack of the Russian cavalry on Bernadotte's carriages at Morungen forced them to go back. The attack was carried out by three squadrons of the Courland Dragoon Regiment of Prince M. P. Dolgorukov and 6 squadrons of the Sumy Hussars of Count P. P. Palen. This cavalry was sent from the column of the main forces of Bennigsen for reconnaissance. Approaching Morungen from the south and not even knowing about the battle between the troops of Bernadotte and Markov, they attacked the poorly covered transports of the French. The enemy did not expect an attack, being in the rear of his corps. Finding the approach of the main French forces, our cavalry retreated, taking with them 10 officers and 350 privates. True, most of the French prisoners fled in the dark. Also, our cavalry beat off to 100 Russian and Prussian prisoners who were from the French. 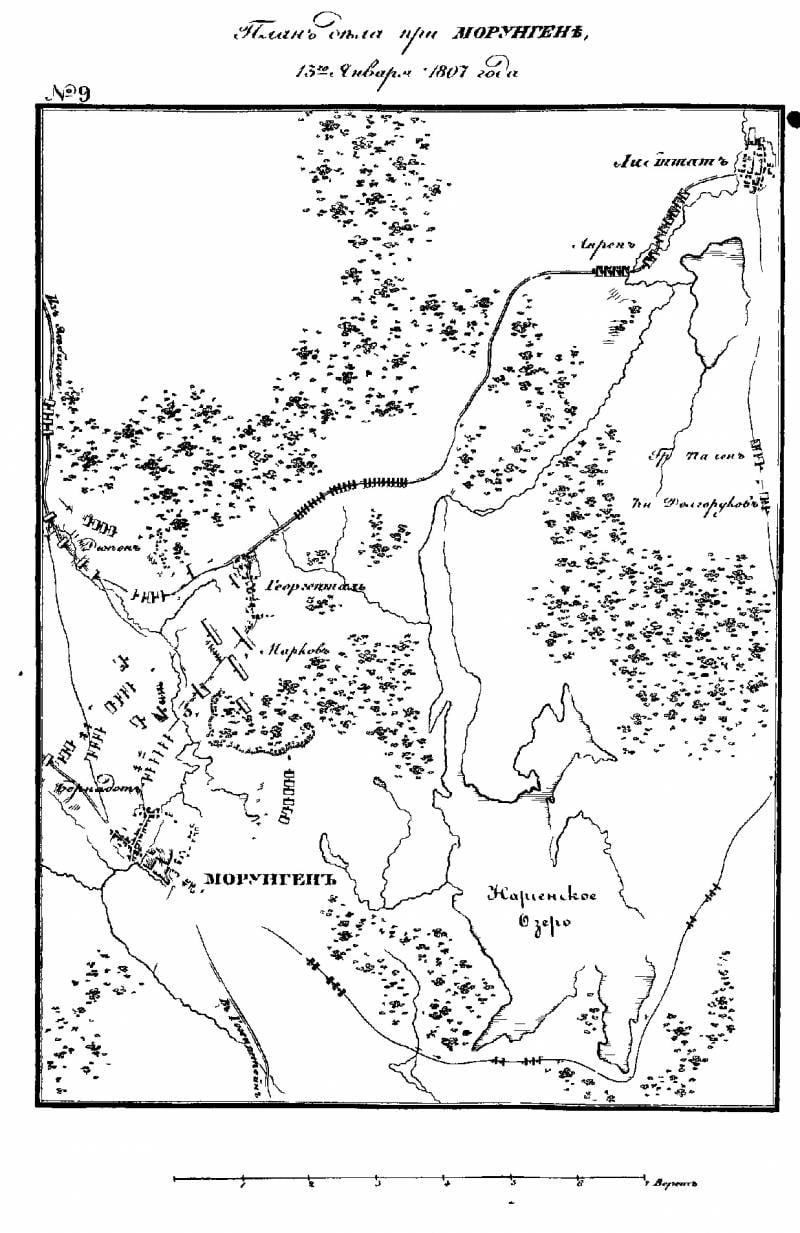 Map source: Mikhailovsky-Danilevsky. "Description of the second war of Emperor Alexander with Napoleon in 1806 — 1807.”

15 (27) January 1807 Mr. Bennigsen moved troops to attack the enemy in Morungen. However, Bernadot had already withdrawn troops to Osterode, on the road to Thorn fortress. Napoleon ordered Bernadotte to hold Thorn. Bennigsen slowed down the movement of the troops and waited for the enemy’s response. Thus, the advance of the army of Bennigsen did not reach its goal, he failed to take advantage of the division of enemy forces, the general missed the time and strategic initiative to defeat Bernadotte separately. Napoleon, having received news of the movement of the Russian army, launched an offensive in the flank of the enemy. 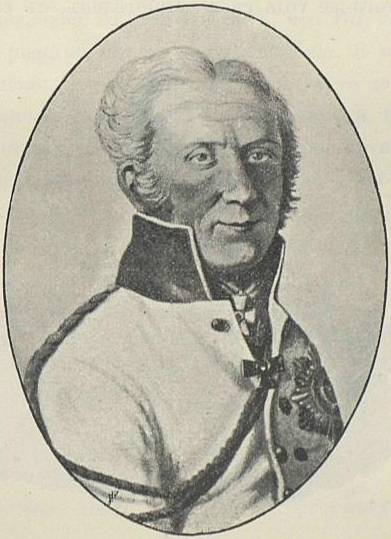