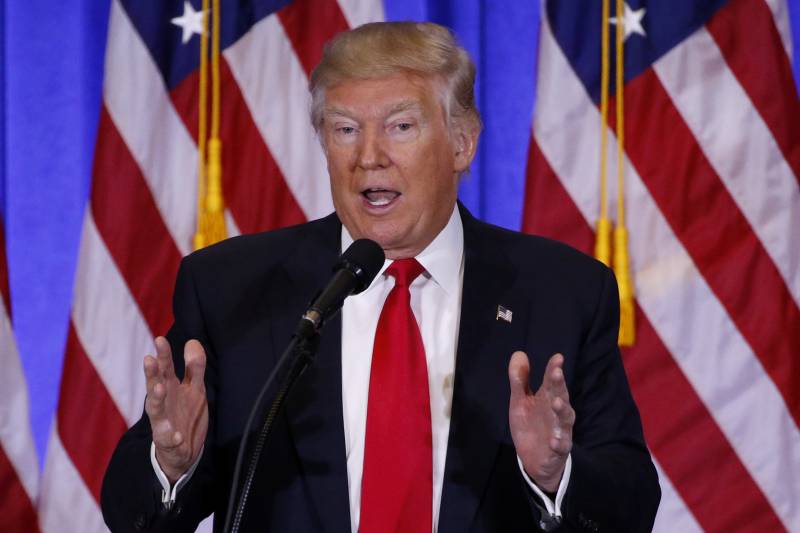 Last week, there were two major public speeches by the forty-fifth President of the United States Donald Trump: a press conference in New York and an interview with the British Times and the German Bild.


Based on the statements and plans of the new head of the White House, we will try to find out whether Mr. Trump can become a kind of “springboard” for the normalization of both bilateral and international relations between Moscow and Washington.

Let's start with an analysis of the conference from 11 in January, which, in addition to the leader, was also attended by Mark Pence and Sean Spicer, who will occupy the posts of vice-president and spokesperson, respectively.

The event was centered on issues such as hacking into the servers of the National Committee of the Democratic Party and the attempt to penetrate the computer systems of the Republicans. According to the new head of the United States, there is no doubt about the involvement of the Russian side in cyber attacks, but added that other countries, in particular China, are carrying out hacker attacks.

In general, hysteria about various operations conducted by different states in the virtual space is completely incomprehensible. The fact is that in every country there are intelligence structures and services. It is not at all surprising that these organizations carry out their tasks, which in the modern world have gradually developed into operations in the cyber industry. By the way, Donald Trump himself on this occasion said that the special services are vital and extremely important, which indicates the coordinated conduct of such operations by US special units.

The second topic of discussion was the format of future Russian-American relations. The American billionaire promised to take a much tougher stance against Moscow than the loser Democratic candidate, Hillary Clinton, could do if he couldn’t find points of contact with Russian President Vladimir Putin.

In addition to plans related to international politics, US domestic problems were also discussed, such as health care reform (which should be cheaper and better), the work of the Supreme Court and the tasks of border security.

After the press conference from the representatives of the new and outgoing administrations, many statements followed.

For example, Rex Tillerson, nominated for the post of state secretary, said that the recognition of reunification (according to the mistaken opinion of the Americans, this Russian word translated as annexation) of Crimea with Russia is possible only if broader agreements are concluded with the Kremlin that respect the interests of the Ukrainian people.

And Senator John McCain, in turn, questioned the possibility of restarting Russian-American relations, since, in his opinion, productive communication with Russia can only be based on the principles laid down by Ronald Reagan: “peace through force”.

As for the interviews with the Times and Bild newspapers, Donald Trump’s foreign policy priorities were the main issue: fighting the Islamic State (the organization’s activities were banned in Russia), disarmament talks with Moscow and tougher US migration policies.

Of particular interest are Trump's plans to conclude a bilateral treaty with Russia to reduce nuclear weapons in exchange for the lifting of sanctions. Such a proposal is quite provocative. According to the logic of the White House’s host, it turns out that in exchange for the abolition of unreasonable economic restrictions, the Russian side should reduce its nuclear potential, and this against the backdrop of the increase and strengthening of the NATO military contingent in Europe.

In general, there is a large share of the likelihood that US policy under the new leadership will retain all its characteristic features. Washington is deeply seated the idea that Americans can dispose of the whole world. Therefore, we may not once again face the tyranny of the star-stripped democracy, when numerous information shots are created to divert attention from their crimes, which, with the help of indications of random, petty and often made-up facts, cause disorientation of human consciousness.