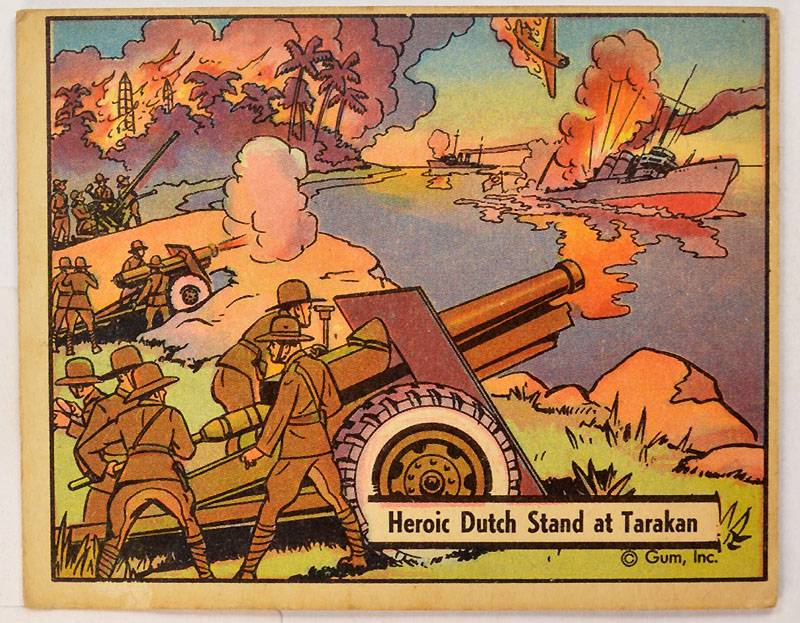 75 years ago, 10 January 1942, the Japanese army and navy launched a landing operation to seize the island of Tarakan. Under this relatively small island, 18x20 kilometers in size and its coastal zone, there is a large oil field, the seizure of which was for the Japanese one of the main goals of the initial phase of the war in the Pacific.

The cockroach, located a few kilometers off the east coast of the island of Borneo, was part of the Dutch colony of Ost-India (now Indonesia) and was defended by a garrison of 1300 colonial troops with eight field and eight anti-aircraft guns, as well as seven machine-gun armored vehicles. From the south, the coastal battery, consisting of two 120-millimeter and four 75-millimeter guns, guarded the island and another one with four 75-millimeters in the north. At the same time, from the east and west, Tarakan was defenseless, but there his shores were very swamped, which made it difficult for the landings to land.

On the afternoon of January 10, the Dutch reconnaissance seaplane Dornier-24 discovered a large enemy approaching Tarakan flotilla. Having learned about this, the commandant of the island, Colonel Simon de Waal ordered to set fire to oil fields, oil storage facilities and oil pumping stations. In the evening, when it got dark, the Japanese, not meeting resistance, began to land on the east coast. The operation involved the forces of the 2nd Special Marine Corps "Kure" and the 56th Infantry Regiment with a total number of 6600 men under the command of Major General Shizuo Sakaguchi.

Early in the morning of January 11, Japanese troops began to slowly advance through the coastal swamps and dense mangroves in the direction of a bright glow that lit the burning oil fields and the capital of the island, the town of Tarakan. On the outskirts of this town, de Waal decided to take up defenses and fight. However, the defenders of the island did not last long. The Japanese with a bayonet attack knocked them out of hastily dug trenches and threw them into the city. After that, the colonel decided that further resistance was useless and sent an envoy to the enemy with a white flag and consent to surrender.

The fact that the garrison surrendered was immediately reported on the radio of the second amphibious flotilla, which went around the southern tip of the island, in order to disembark the landing on the western shore. Having received the dispatch, the Japanese no longer feared the southern coastal battery and set off along the coast, within the reach of its guns. However, the battery either did not receive the order to surrender, or refused to carry it out, opening rapid fire at the ships sailing past. Before their teams managed to respond and get out of the shelling zone, W13 and W14 minesweepers were sunk by several successful hits, which were used as transports. At the same time, 200 of Japanese sailors and paratroopers was killed.

The rest of the ships went around the battery and landed behind it. Marines attacked the gunners from the rear and ruthlessly killed all without taking prisoners. Meanwhile, in the city of Tarakan lay weapon 870 Dutch soldiers and officers. Their fate was sad. General Skakguti, furious that the Dutch had destroyed the oil fields and, contrary to the surrender agreement, fired upon his ships, ordered to drown all the prisoners.

On the same day the order was executed. The prisoners were tied up, driven onto decks, driven a couple of kilometers from the coast and dumped into the water. The general and his subordinates did not suffer any punishment for this atrocity. Thus, the Japanese clearly demonstrated that they do not intend to wage war in accordance with international conventions and European moral norms of the twentieth century. Their moral was completely different.

The last chord of the drama drama was a raid on the island of several Dutch Martin-139 bombers. Airplanes taking off from Borneo dropped bombs on a Japanese camp, killing 18 soldiers and wounding dozens more. As a result, the total losses of the Japanese army and navy during the capture of the Cockroach amounted to 255 people, of whom only 37 died in ground battles with the defenders of the island.

1 May 1945, Australian troops launched an operation to free the Cockroach. The Japanese resisted much more stubbornly than the Dutch, therefore, despite the overwhelming superiority of the Australians in numbers and firepower, the battle for the island dragged on for six weeks. However, this is different история.

The screen saver features a postcard from the time of the war depicting how Dutch artillerymen on Tarakana heroically drown Japanese ships. And the downed aircraft was drawn in vain, since the Japanese did not lose a single aircraft during the seizure of the island.

A pre-war snapshot of one of the oil rigs on the Tarakan and a Japanese photo of a Dutch farm burnt. 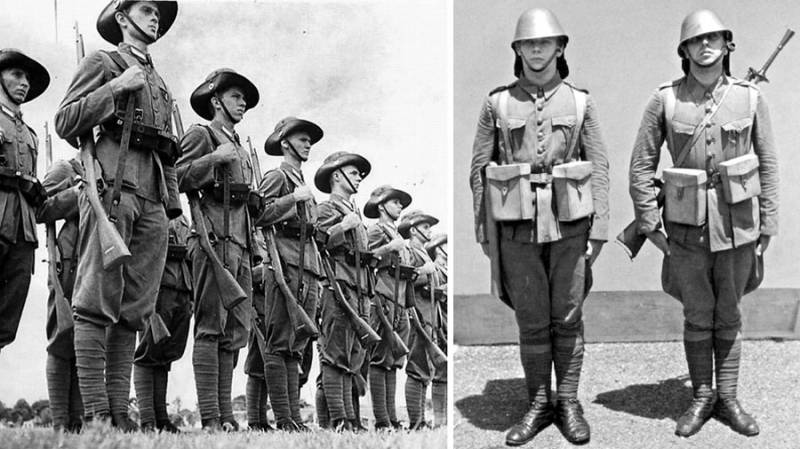 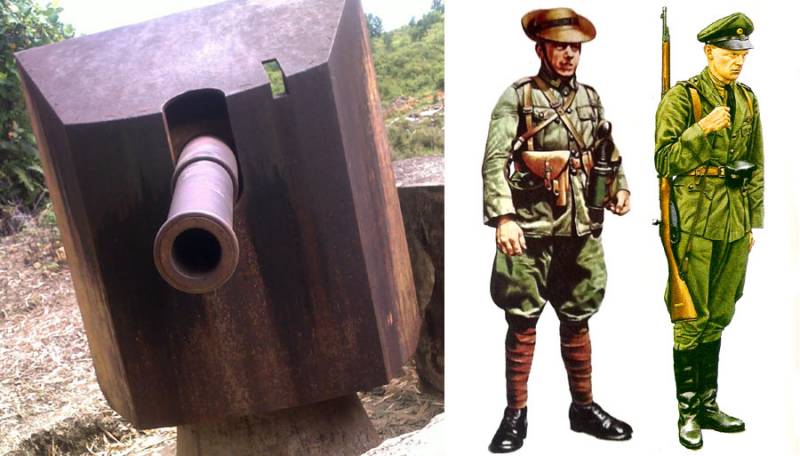 On the left is one of the surviving 120-millimeter-sized coastal guns with broneshit to the present day on the Cockroach. On the right is a Dutch colonial marine and an Air Force ground command soldier wearing 1941-42 outfits. 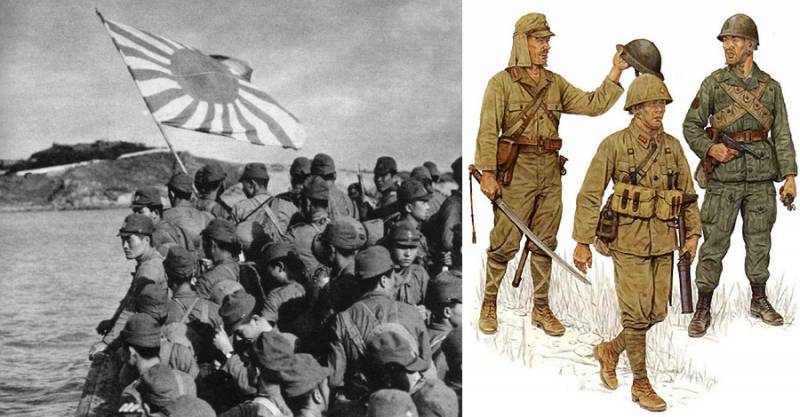 On the left - Japanese paratroopers land on one of the islands of the Dutch East Indies. On the right is the uniform of the Japanese infantry officer, sergeant and airborne paratrooper of the 1941-45 Pacific War. 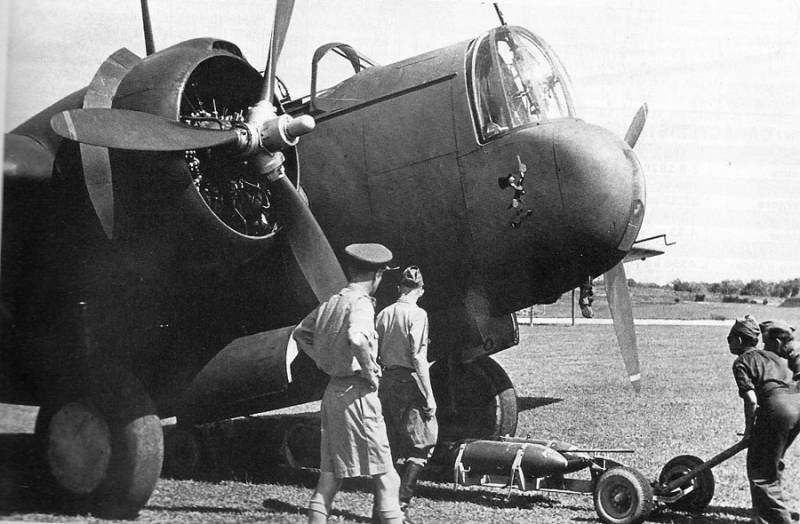 "Martin" in Borneo is preparing for a combat mission against the Japanese, 1942 year. 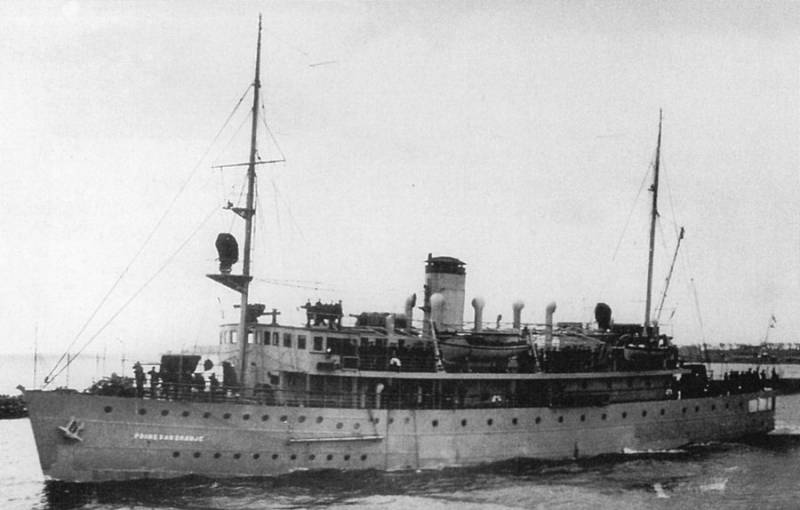 Dutch minesweeper "Prince Van Orange", converted from a civilian passenger ship. 10 January 1942, this ship was in the port of Tarakana. Upon learning of the approach of the Japanese squadron, he tried to leave for Australia, but was intercepted by the Japanese destroyers and sunk along with the whole team.