The project of dismemberment of Russia and backstage power 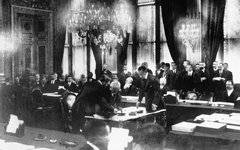 The ideas of globalization in Europe coincided with the ideas of economic expansion and the conquest of the markets of the ideologues of Central Europe. The solution could be the creation of a single economic space, which at the beginning of the 20th century was written by the ideologist of “Belgianism” Leon Hennebig.
From here, the interest of the “pan-European union” to Hitler, about which Yalmar Schacht informed his colleagues, is not surprising: “After three months, Hitler will be in power. He will create a Pan-Europe ... Only Hitler can create a Pan-Europe. "


This plan was preceded and developed in parallel by the project “League of the World’s Realization”, which was attributed to Woodrow Wilson, who was co-authored by journalist Walter Lippmann. Senator Owen Jung, the author of the plan of the same name, painted an arsenal of funds provided by the League for world domination: international court and arbitration, the use of collective armed forces, the possibility of financial and trade blockade against "non-subordinate countries."

According to a number of lobbyists, the possibilities of the League and the provisions of the Versailles Treaty opened up European markets for the US, and the new system of mandates access to the colonies, which, apparently, included Russia, which the project, which acquired the final name of “League of Nations”, was not widely considered.

But the American delegation brought to the Paris Conference, summing up the First World War (which was held intermittently from 18 in January 1919 of the year to 21 in January of 1920), a map with new frontiers of the Russian state, where Moscow was left Central Russian Upland, cut off the Baltic States, Belarus, Ukraine, the Caucasus , Central Asia, Siberia.

In October 1926, at the First Congress of the Pan-European Movement, Richard Coudenhove-Kalergi was elected International President of the Pan-European Union, 5 September 1929, at the meeting of the Geneva League of Nations, the question of creating a Federation of European Nations was already raised. In Basel, at the Third Pan-European Congress in October 1932, Coudenhove-Kalergi put forward a thesis about an uncompromising attitude towards Stalin, but what is more remarkable - also to Hitler, who is gaining momentum.

There was a split in the elites, where its American part about Europe had a different plan, the existence of which is confirmed by the defeat of the secretariat of the Pan-European Union in Vienna after the seizure of Austria. Coudenhove-Kalergi runs to Switzerland, the fifth congress is already in New York on 1943.

Both projects created "Pan-Europe", the stumbling block was the question of the conductor's baton. The industrial association was the score of an alternative to a financial association: Interessen Gemeinschaft was outlined at the end of August 1916, when Bayer, BASF, Agfa, Hoechst, Kale and Cassella, Griesheim Elektron and Weiler-ter-Meer ”finally wished to become allies and the shape of the future alliance was designated. December 25 Bayer, BASF, Agfa, Hoechst, Griesheim Elektron and Weiler-ter-Meer signed a full cooperation agreement, Kale and Cassella, formally independent, adhered to hotel agreement “Interessen Gemeinschaft Farbenwerke der Deutschen Teerfarbenindustrie” or “IG Farben”.

The name Farben, an abbreviation IG, stands for Interssen Gemeinschaft, which means “community of interests,” and Farben, apparently in memory of the industry that gave rise to concern, means “colors.” Officially, the process of recreating the concern is led by Carl Bosch and Carl Duisberg. There is no direct evidence on what conditions IG Farben was recreated, but a remarkable fact is that in 1927, the head office of the new monopolist was rebuilt in Frankfurt am Main on the lands from the 1837 of the Rothschilds.

It was built with money from the Dillon, Read and Company banking group, owned by the Warburgs. The main bank serving the interests of IG Farben was Deutsche Bank, which had long-standing relationships with BASF and Farbwerke vorm. Friedr. Bayer & Co. ”, one of the members of the bank's board of directors was a member of the corresponding body“ IG Farben ”. During the Second World War, it will be Hermann Josef Abs, who during the described period still held the position of deputy, and again Warburg was the honorary chairman.

Officially investigating IG’s activities, Richard Sesuly (Richard Sasuly) describes the new IG building as follows: “The IG headquarters in Frankfurt was located in a new building large enough to accommodate an entire ministry. IG Far¬benindustri was almost an independent power. " 39 directors of the coalition of enterprises included in the Supervisory Board of the Aufsichtsrat, where Karl Duisberg was elected as the first chairman, were now meeting there. For operational management, the Board of Directors of Vorstand was established, headed by Karl Bosch, whose right hand was Hermann Shmitz.

In 1920, the Swiss pharmacological companies Siba, Geigy and Warburg-based Sandoz merged; they soon concluded a cartel agreement with IG Farben. In 1926, IG absorbed two explosives manufacturing plants: Dynamit-Nobel and Rheinisch-Westfälische Sprengstoffwerke. If an attempt to penetrate into the market for explosives in 1925 year met with the threat of a comprehensive war in all foreign markets from DuPont and Hercules Powder Co, now DuPont has entered into a coalition with Dynamit-Nobel.

And to 1929 through the subsidiaries of the megactivo - American “Winthrop Chemical”, English “Imperial Chemical”, and Japanese “Mitsui” - significant stakes in “DuPont” and “Eastman Kodak” were transferred to “IG Farben”. By agreement, the holding proceeded to manufacturing cellophane under the license of DuPont, and DuPont became the owner of half of the shares of the American Bayer Semesan Company and 6% of the ordinary shares of Farben IG.

In 1926, the largest British chemical firms were organized into a single concern, Imperial Chemical Industries. According to the cartel agreement, Farben IG had 75% of the total export quota, in 1927, the concerns controlled 80% of the total world production of dyes, dividing the whole world with the exception of the USSR and the USA. However, in 1932, Imperial Chemical Industries admitted that it could no longer compete and merged with Farben IG.

Together with Imperial Chemical Industries, the monstuos Farben IG has grown into a tentacle 95% of all British chemical products, 100% nitrogen production, 50% dyes, a substantial part of gunpowder and small weapons, through “Imperial Chemical Industries”, the German Frankenstein had connections with “De Beers” and “International Nickel Co. of Canada. " Since 1935, IG has been a consultant to ICI for the construction of the largest chemical plant in the north-east of England.

The change of anger to mercy by the American partners was marked by a revision of reparation payments to Germany, which implied the withdrawal of the occupying troops from the Rhineland and the elimination of foreign control bodies. The text of the agreement, both new and the previous one, was drawn up by Sullivan & Cromwell. Since the plan was proposed by Owen D. Young, director of the American subsidiary of AEG and General Electric, the name of the Young Plan was assigned to it, although the committee that developed the plan included J.P. Morgan, Herbert Hoover, John Foster Dulles Averell Harriman, and Hjalmar Schacht on the German side.

The plan was adopted at the Hague 1929 — 1930 reparations conference. Part of the plan was the creation of the Bank of International Settlements (Bank of International Settlements). In 1929, a number of events took place: Max Warburg joined the IG Farben board, this place will remain until the 1938 of the year. In addition, Robert Williams’s article published in the Williams Intelligence Summary in February 1950 of the year: General Ludendorff’s widow recalled how her husband withdrew from Hitler, because at the beginning of the summer of 1929, James Warburg, as part of establishing control over Germany, sought to find a suitable person in Germany and came into contact with Adolf Hitler.

According to researchers S. Dunstan and D. Williams, it was on the account of the “Union Bank of Switzerland” (UBS) in Bern that A. Hitler's personal account was opened, as well as another in Holland.

The idea of ​​a bank of international settlements is eloquently described by Bill Clinton’s mentor, Carroll Quigley, in his book Tragedy and Hope: The World история most recent time ":" The forces of finance capital pursued another far-reaching goal - the creation of no less than a privately owned global financial control system that has power both over the political systems of all countries and over the world economy as a whole. "

The Bank for International Settlements was a closed club, whose directors were a member of the Financial Committee of the League of Nations (Financial Committee of the League of Nations), Treasury Controller and Director of the Bank of England Sir Otto Niemeyer and Bank of England Governor Sir Montagu Norman and on the German side, German Economy Minister Jalmar Schacht, the future president of Reichsbank Walter Funk (Dr. Walther Funk), his deputy Emil Paul (Emil Puhl), who had “solid connections in the US”, in particular, “Chase National Bank”, chairman of the board of the IG Farben concern Herman Schmitz, the future SS general Ernst Kaltenbrunner (Ernst Kaltenbrunner), head of the JH Stein bank in Cologne Kurt von Schroeder (Schroeder). According to the new provision, the Commission of the Bank for International Settlements determined the displacement of the head of the central bank of the German Empire.

It is noteworthy that the retired bankers from the banks of the Federal Reserve System became the first chairmen of the bank: Gates W. McGarrah from the Rockefeller's Chase National Bank and Leon Fraser. The latter, having no economic or financial education, being just a journalist who violently denounced corruption, managed in 1924 to become Consul General of reparation payments under the “Dawes Plan”, then Director of “General Electric” and “United States Steel”, then President of “First National Bank, a fast-moving career in the spring of 1945, finished with a shot to the head.