War, gold and the pyramid of ... Cheops (part four)

January 17 2017
25
Last time we settled on the fact that ... it is difficult to be the son of a great father. From childhood it seems that the people around you are treated worse than they are to him, they chuckle behind their backs - they say, the youngster on the throne, in a word, “do not respect”. So you need to show that you are not worse. And the son Snefru had the opportunities for this, because it was not for nothing that he was making military campaigns in the “land of Asians”. And so he decided to build himself a pyramid, which was not in the world yet, and ... built it! 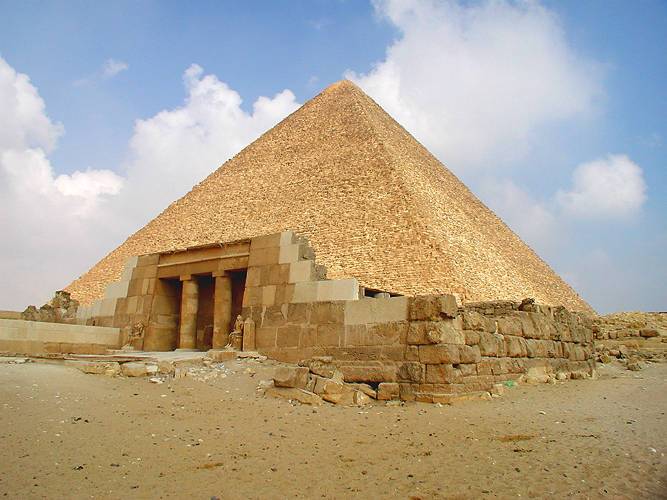 The pyramid of Cheops and the upper requiem temple located in front of it.

He built it on a plateau in Giza, in an area that is now two steps away from Cairo, so that in the literal sense of the word, Pyramid Avenue rests on its pyramid and the other two. Now everything is tidy here, it is arranged in the interests of tourists, so it is a pleasure to be here if it were not for the crowds of these tourists from all over the world! Guides - many of whom are Russian, broadcast on topics who are closer ... "It is considered (who, when, from where) that under the Pyramid of Cheops is the entrance to the underworld, where even today the descendants of the Atlanteans live!"; “It is not clear how the pyramid of Cheops was built. This is a unique creation! ”And so on. By the way, the fact that it is unique is “yes”, but ... why did the guide not tell about all the previous pyramids, including those that had collapsed, according to which the construction technology was read a long time ago like a book? After such statements, all kinds of firefighters from Mokshan write about the fact that these are breakwaters from the flood, and make surprised eyes when asked about the pyramids in Sakkar, Medum and Dashura. They did not even hear such names, but they have an opinion - because ... people have a right to do so. 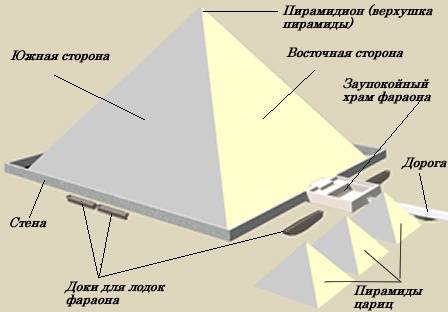 This is how the complex of buildings of the Pyramid of Cheops looked immediately after the completion of the work.

Well, and we will try to consider this official (and for now the only) miracle of the world that has come down to us from the era of the Ancient World. Today its height is 137,3 m, and it was - 146,7. 2250000 stone blocks of sizes a little more than a cubic meter went for its construction, and its weight exceeds the tonnage of the entire (total!) Naval fleet USA, including its aircraft carriers! 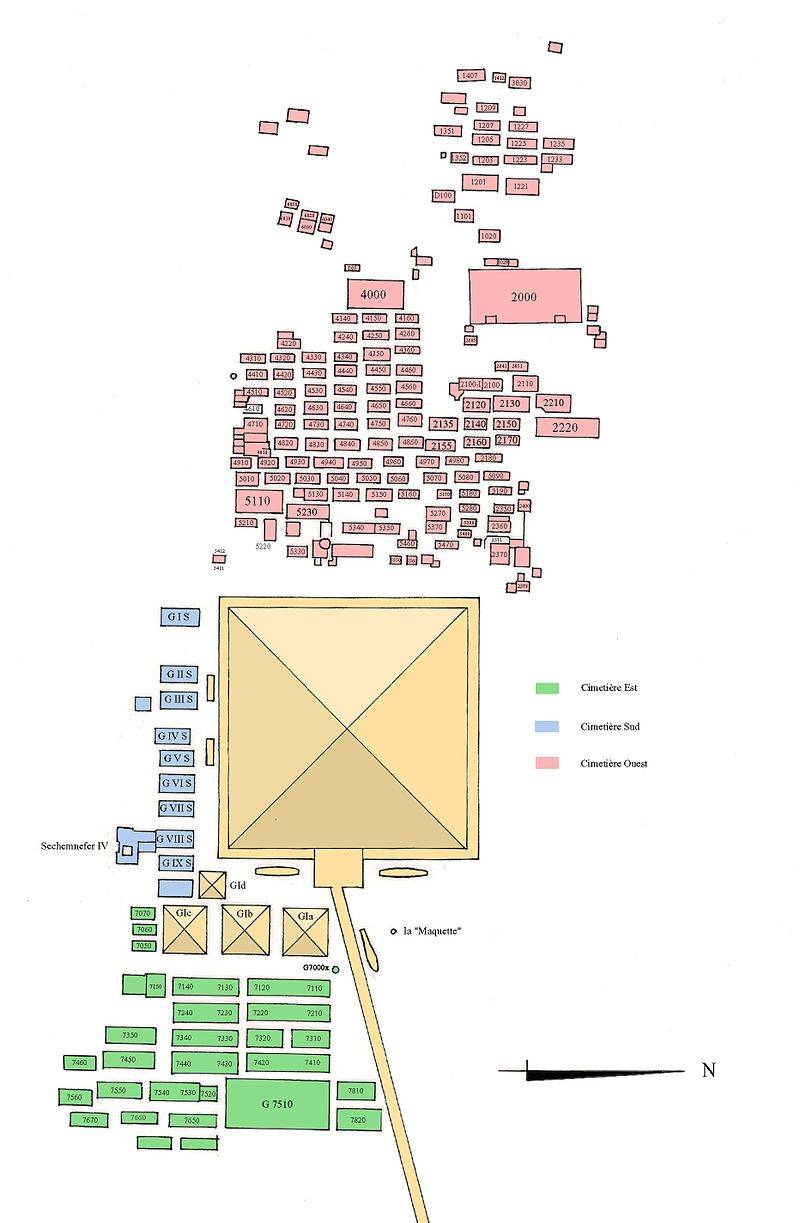 Plan of the area around the pyramid. Small rectangles are mastabs.

His full name was “Khnum-Khufu”, which means “Khnum he guards me”. He had many children: sons Djedefra, Djedefhor, Kawab, Khafre (Khafre) - the builder of the second great pyramid, Banefra, Hufuhaef, and daughters Hetepheres II, Meresankh II, Hamerernebti I, whose numbers were, of course, attributed to scientists, since they coincide with the names other queens and princesses. 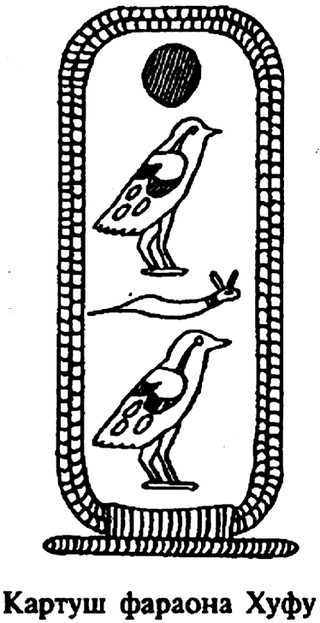 Khufu spent at least 27 years on the throne, which is confirmed by the inscription in Dakhla and also the papyrus dated by the Red Sea dated 27, the year of his reign. It is believed that he was a cruel tyrant and oppressor of his people, who, with him, was engaged only in building the pyramid, but sources in his lifetime report that Cheops also built many cities and settlements along the banks of the Nile, that he sent a military expedition to the Sinai Peninsula to fight the Bedouins who robbed merchants, and to develop the local turquoise deposits. There is an inscription on a stone on Elephantine Island near Aswan, indicating that he was also interested in the southern borders of the country where the famous pink Aswan granite was mined. 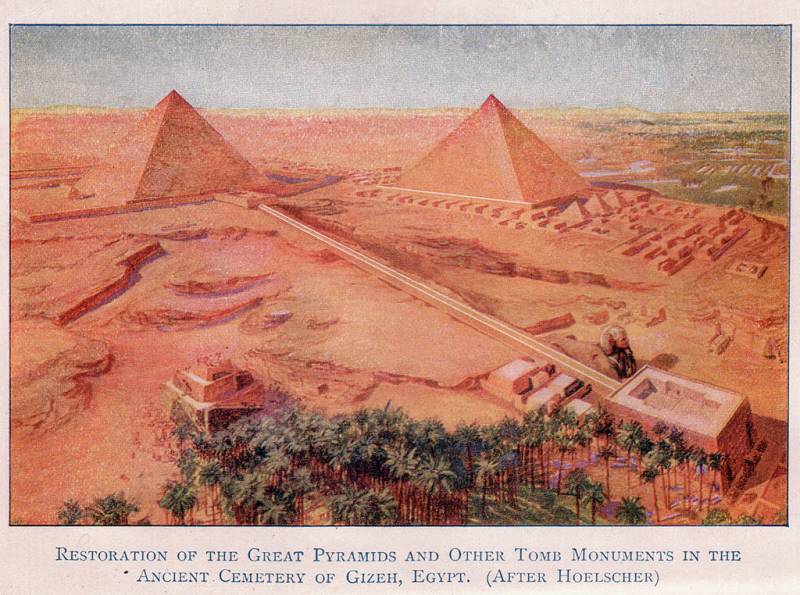 Reconstruction of the appearance of the territory of the Great Pyramids. In the foreground is the pyramid of Pharaoh Khafre and the famous Sphinx. Behind her is his father's pyramid, Khufu.

Now about the construction itself. The construction commander and chief architect of the pyramid was Hemiun, or Hemenui - most likely, either a cousin or nephew of Pharaoh Khufu. They built the pyramid according to a single plan, but at the same time - and this is very interesting, so that the king could at any time find a worthy repose in it. Therefore, there are three successively built burial chambers in it. Until the very first, unfinished, 120 meters have to go along the inclined underground corridor to the base of the pyramid, and there, apart from dust and bats, there is nothing interesting, so there are no tourists there.

The second, on the contrary, is at a height of 20 meters above the base. Finally, the third one, in which the sarcophagus was found, is above all and leads tourists there, electric lighting was held there and railings and wooden stairs were made. The sarcophagus is wider than the entrance to the chamber, which means that it was taken there before the roof was erected over it. 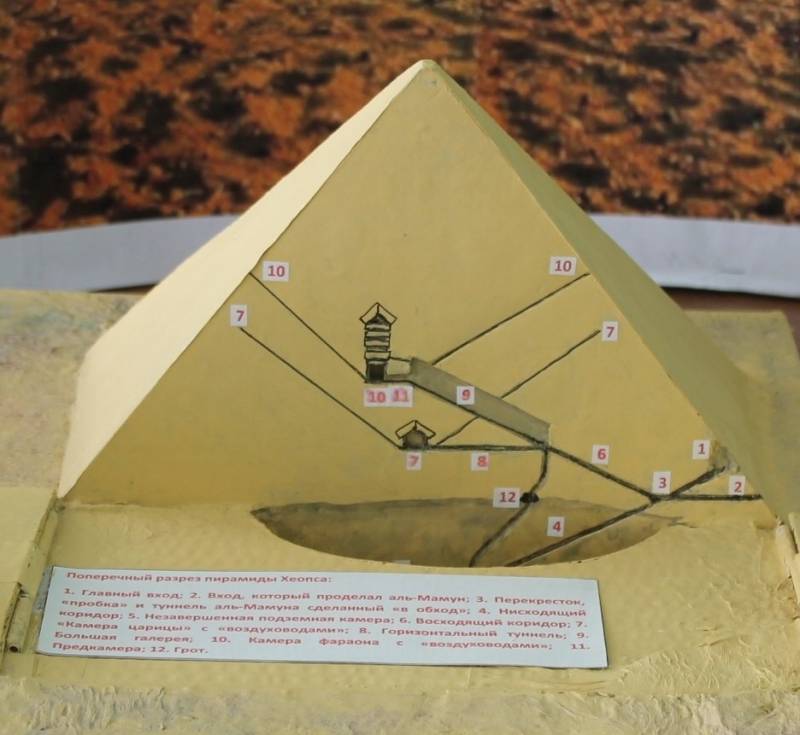 Layout of the pyramid of Khufu in section. Interestingly, the layout is arranged drop-down, the two side parts of the pyramid are hinged, and if these shutters are closed, then the pyramids look whole, and if you open it, you can see its structure. And why would such a lesson for lessons stories Do not release in the form of homemade for school history circles? Here you have both history and technical skills! 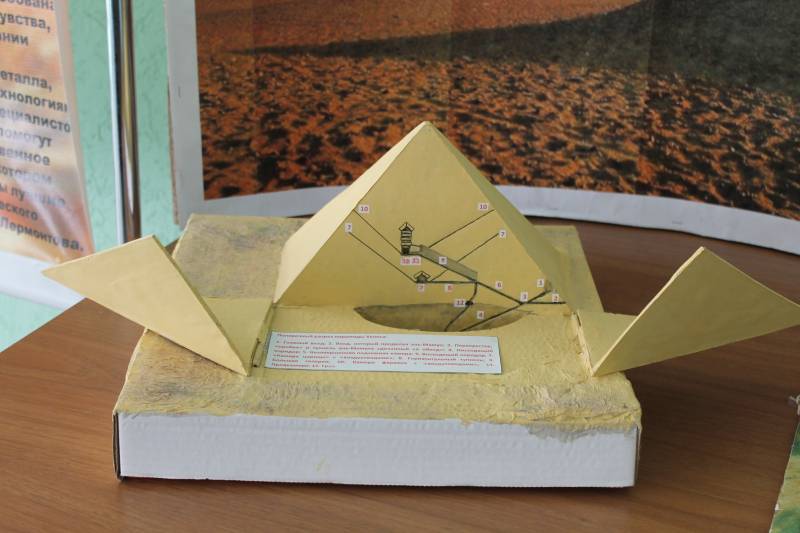 And this is how it looks with the doors and the podium.

Pyramid several times shone through a variety of rays, up to the neutrino, trying to find internal secret voids and "revelations of the Atlanteans", but found nothing, except for two narrow ventilation ducts. 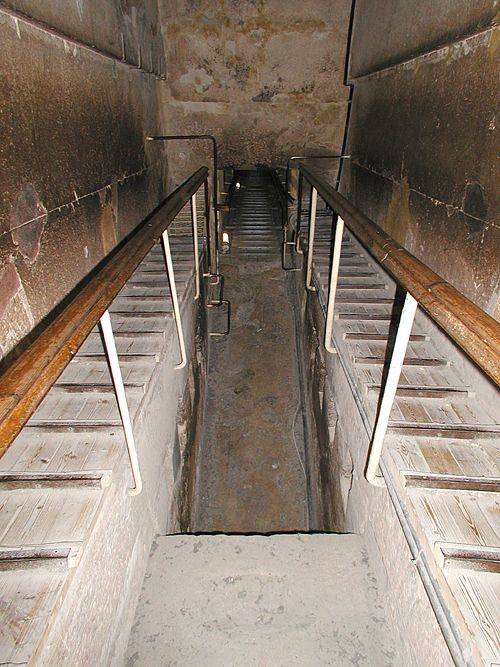 Inside the Grand Gallery.

As usual, a fence was built around the pyramid - a wall 10 m in height and 3 meters of thickness, the requiem temples and tombs of dignitaries were erected - more than 150 mastaby. It must be said that many interesting finds were made in these mastabas. Three companion pyramids belonging to Hetepheres, Meritites, and Henutsen, which could be sisters and wives of Khufu, were also built here. 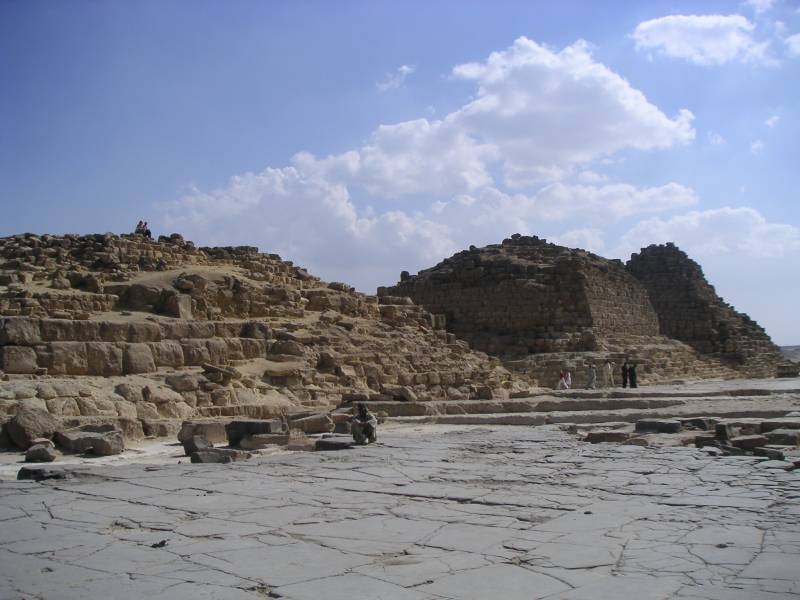 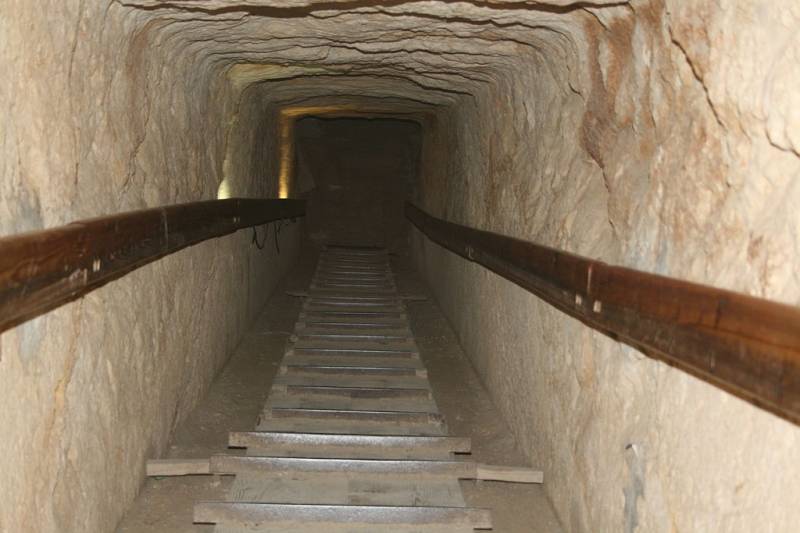 Inside the pyramid of Henutsen. If you have time, it is worth going down to the pyramids-companions. There are very few or no tourists there and you can appreciate it - how can it be alone inside such a pyramid!

Also near the pyramid, they found as many as five (five!) “Docks” for “solar boats” on which the pharaoh’s body was carried to its resting place. Three were empty, but in two in 1954, archaeologists found two disassembled rooks. One collected and now it is exhibited in the museum at the foot of the pyramid, and the other is collected and studied. By the way, both swam. Among the cedar planks from which they were made, they found a characteristic silt. 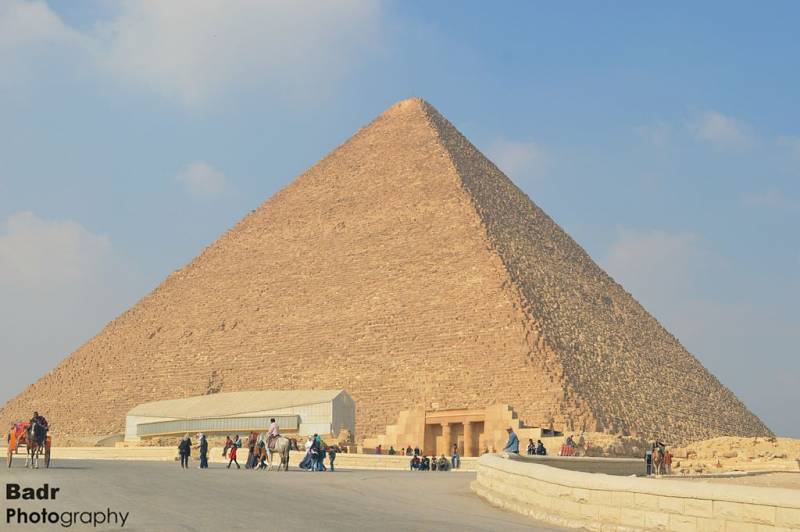 Here, not far from the pyramid of Khufu in 1925, they also found the shaft of the tomb of his mother, Queen Hetepheres, from which gold and silver products were then carried out for three months. 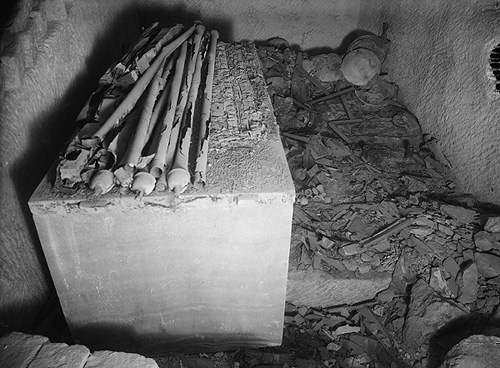 Bas-relief on the rock in Wadi Magara, made by Lepsius.

However, Egyptologists were really lucky only in April 2013, when it was announced that more than 40 papyri were found, dated by 27, the year of the reign of Pharaoh Khufu. Among them was found something like a diary of an official named Merrer, who led him for three months and in which he wrote about his participation in the construction of the pyramid of Khufu in Giza. He reported on how he went to the Limestone Quarry of Tours for the stone blocks that were cut down there and transported to the pyramid from there. That is what it was possible to guess about earlier, it was confirmed ... 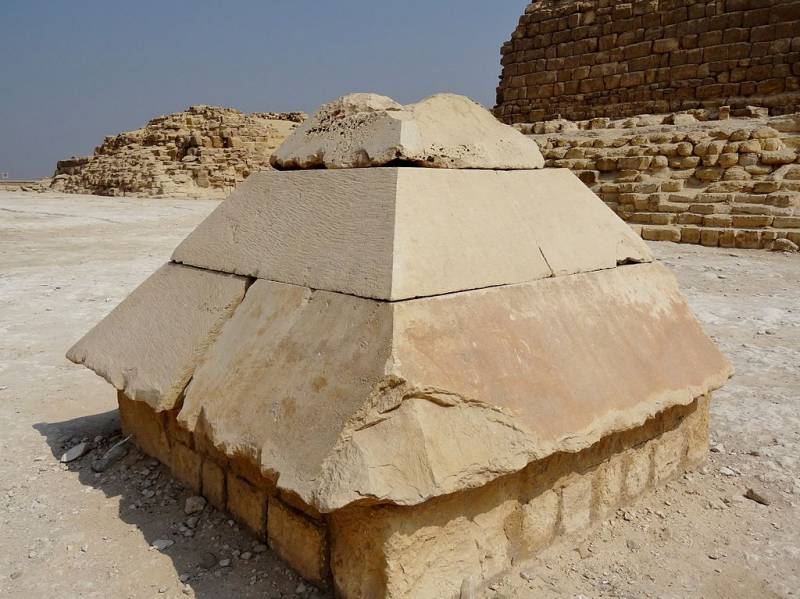 Pyramidion, once crowning the pyramid of Cheops. 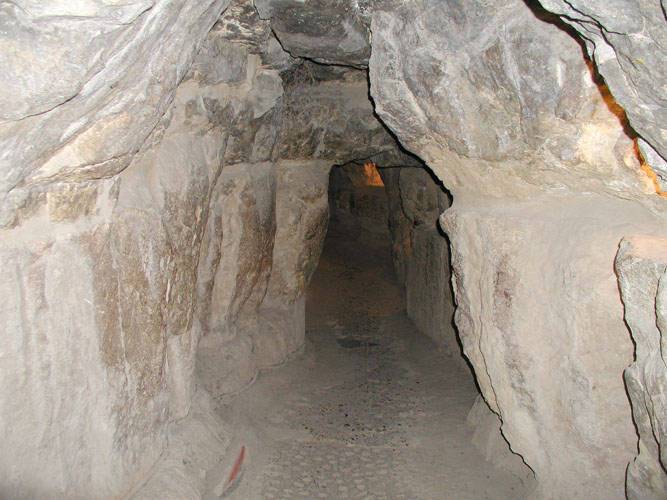 And this is a passage punched into it by the ill-fated Arab caliph Al-Ma'mun in 820. He sought for treasure, but found nothing!

Indeed, the site for one more pyramid, found to the east of the Pyramid of Cheops, is large enough. They began to level it, but then abandoned it, and this is the question for whom it was intended and why it was abandoned? By the way, Napoleon visited the pyramid of Cheops and, of course, she impressed him!