January 18 2017
63
Some time ago, a material about a Swedish self-propelled mortar appeared on the VO pages. What is история this species weapons and, most importantly, what are its prospects? What original technical solutions were offered by designers of self-propelled mortars? This is what the story is about now. 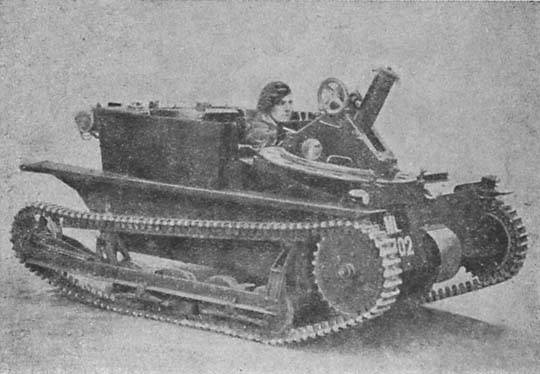 Carden-Lloyd wedge with a mortar as the main weapon.

It will be necessary to start with the fact that both the classic Stokes mortar and the first mobile mortars first appeared in the British. On the tanks "Tedpol tail" ("Tadpole Tail") heavy English mortar of 9,45 inches (in fact, it is a copy of the French 240-mm mortar Dumézil-Batignol, but loaded from the muzzle) was installed on the platform between the rear parts of the elongated tracks and with the same the area he shot. The British, with their characteristic English humor, called the shell to it "The Flying Pig", and then the name "stuck" to the mortar itself. The maximum range of the shot was 2300 m with a barrel length of 130 cm for the Mk.I sample and 175 cm for the Mk. II. Vertical guidance angles from + 45 ° to + 75 °. The Mark I weighed 680 kg, while the Mark II weighed 820 kg. The mortar was served by a crew of 9 people. But on the tank it was reduced to 4. Since the target in front of the tank was not visible to him, the commander of the tank commanded the crew, indicating the distance to shoot, for which a special table was attached in front of him on the armor plate. It is clear that the “flying pig” could not wait for accurate shots at the target, but the powerful explosion had a strong psychological effect on the enemy. But still, the British abandoned this weapon, considering it not very effective. 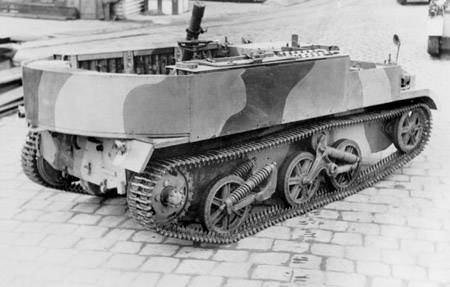 3-inch mortar on the chassis "Braine-Carrier."

In the 20s, they also launched a second run, setting up a Stokes 76-mm mortar on the “Cardin-Lloyd” wedge. True, it was released such mortars all 18. In them, the mortar was installed on the rotary gun carriage, in the place of the machine gun, it was charged manually, then it was aimed at the target and only then the shot was fired. This scheme negated the main advantage of the mortar - its rate of fire, reaching the Stokes mortars to 30 rounds per minute. But, on the other hand, this mortar had dignity. His shell fell on the enemy from above! 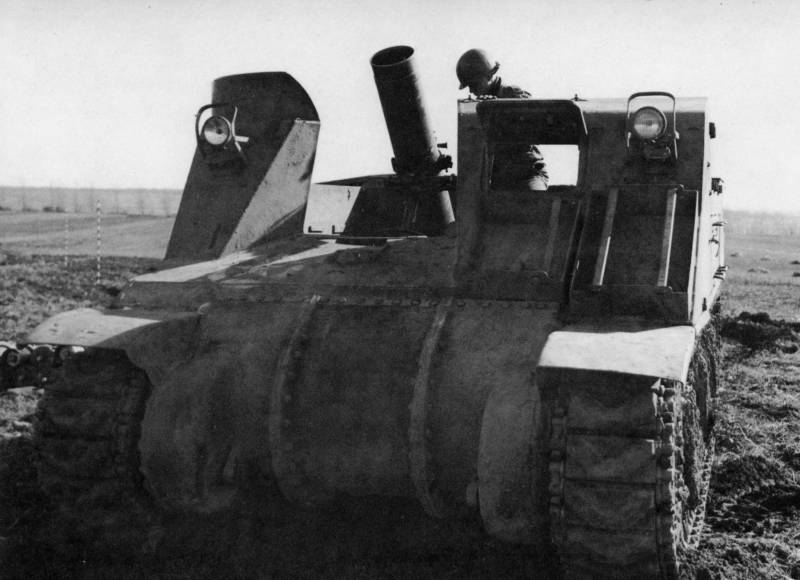 During the Second World War, the Germans, having acquired a mass of tracked trophy equipment, decided to use it not so much as intended, but as a base for the most extensive experiments in the field of weapons. Flame-throwers were mounted on the French tank chassis, guns and howitzers were installed, and installations for launching missiles were installed. One of the directions was the creation on the basis of both captured machines and their own, self-propelled mortars. Their own, as a rule, had the traditional layout of the mortar in the combat compartment of the BTR, from which the roof was removed. Here, the rate of fire did not decrease, and mobility did not decrease, and besides, the security of the calculation increased many times. 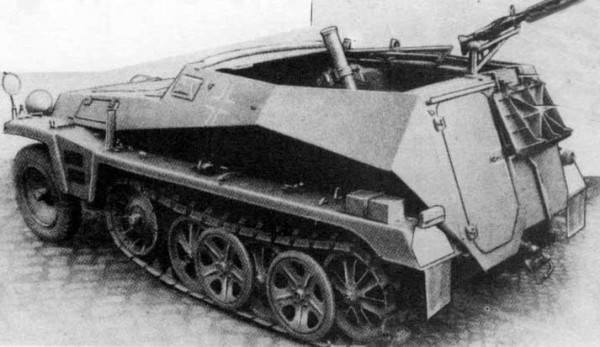 German self-propelled mortar on the chassis of the BdR Sdkfz250.

But the Germans tried to create the first self-propelled mortar fire based on the captured chassis. There were modifications with sixteen, and even with twenty trunks. In both cases, French 81-mm Brandt mortars with a barrel length 13,8 caliber were used, firing both fragmentation and smoke mines weighing 3,3 kg at a distance of 3030 m, explosive mines at 6,5 kg with explosive charge of about 1,5 kg at a distance 1120 m According to its data, this mortar was very close to the Soviet 82-mm mortar. But the self-propelled mortar was distinguished by the presence of a rotary gun carriage and the ability to fire at 360 degrees. Elevation angles were common for mortars - 40 ... 90 degrees. 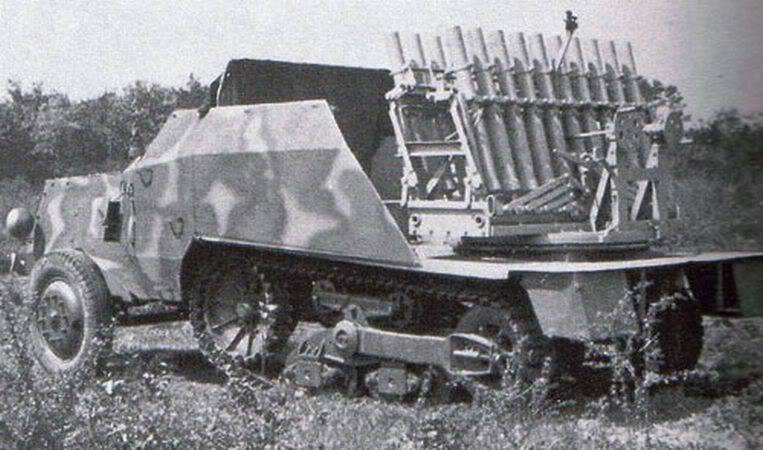 German self-propelled mortar on the chassis of the BTR "Somau".

Mortar for self-defense on the chassis of an experienced machine T6E1 based on the tank М24.

The trunks were mounted on a carriage and a swivel base, had guidance mechanisms and a remote drive for firing mechanisms. The calculation charged the mines for the barrels, after which the car went to the position and ... fired either at a high rate of fire, bringing down all its 16-20 mines to the enemy in a matter of seconds, or, on the contrary, let them out one by one, with careful adjustment of each shot. For obvious reasons, the main of which was slow loading, this system did not take root after the war. 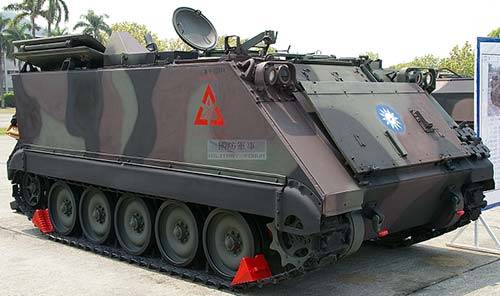 Americans, for example, and not only they made self-propelled mortars based on their most massive BTR M-113. A retractable roof was built on it, that is, it differed from German similar cars only in a fully tracked chassis. It turned out that it was very convenient to use the chassis of obsolete tanks for such mortars. They removed the tower from them, then mounted something like an armored “box” on them, clamps for a mortar plate were placed on the bottom, which, by the way, made it possible to remove the mortar from the chassis and shoot it from the ground, and that was all that was needed. That is, such a modification of the combat vehicle could be built even without a developed military industry! 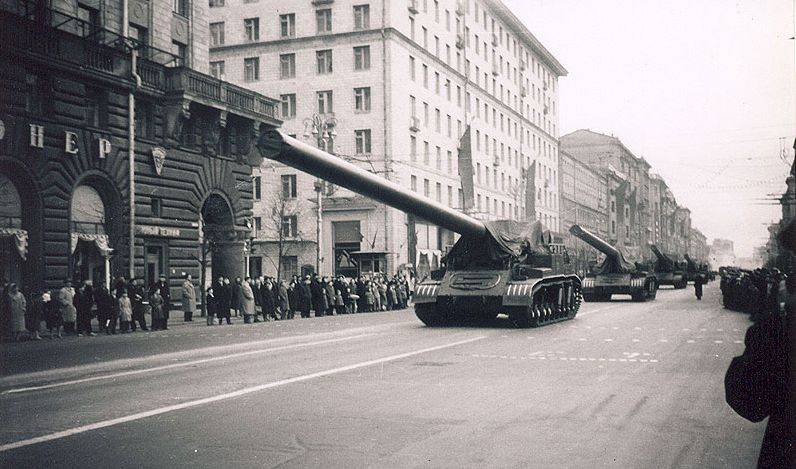 Soviet monstrous self-propelled mortar 2B1 "Oka". Only one thing can be said about him: small caliber! It was necessary to do at least 508-mm and show in action to foreign military attaches and journalists at one of the sites! That would be the best PR of all times and peoples, but 420-mm also caused a stir!

Later, many attempts were made to create an effective self-propelled mortar with the location of weapons in the turret, and to increase the rate of fire of the mortars, two were installed at once. The Americans also went down this path and created an experienced mortar on the M113 chassis, but ... it turned out that the car was too big, too noticeable, and had no real advantages over the crazy version. 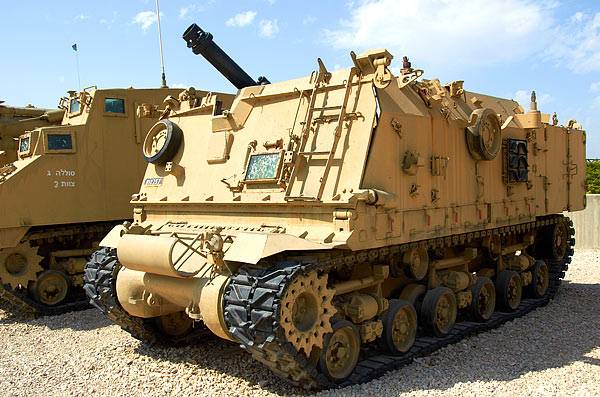 Israeli 160-mm self-propelled mortar on the chassis of the Sherman tank. Fort Latrun.

The main problem of a mortar is in the features of its design. So, if it charges from the barrel, then this is a high rate of fire, which is unattainable if a similar mortar is placed in the tower. If, on the contrary, it charges from the breech, like, for example, our 240-mm Tulip, then this is a tremendous destructive power, but ... low rate of fire! That is, in one case we win, losing in the other, and vice versa - in the opposite case. How to combine a horse and a quivering doe in one harness? There are a lot of offers here. There are a lot of curiosities among them. For example, arrange a self-propelled mortar with large-caliber trunks in the back of a KAMAZ vehicle! Book a cabin and ... use it as a volley fire system at relatively short distances. 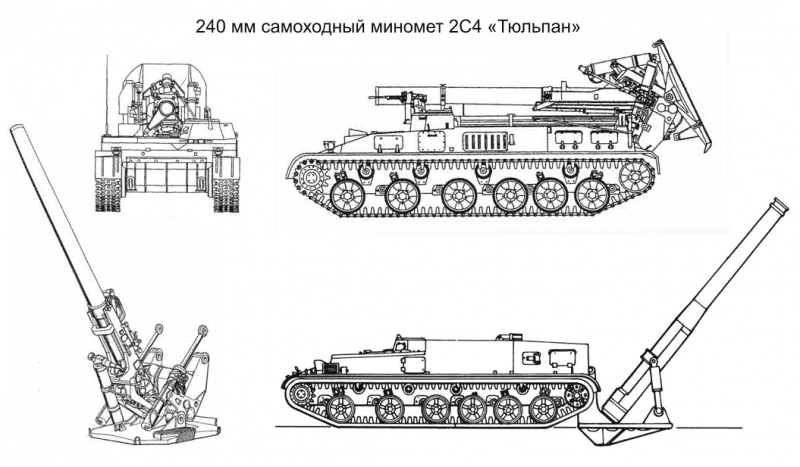 Mortar "Tulip" - a powerful weapon in all respects!

Now more and more battles are fought in cities and on the roads where concrete roadblocks are established. The distance to them is quite easy to determine. So we put such a car at a pre-calibrated distance, which, incidentally, does not cause any special suspicions, and ... produce a volley on the target. If a checkpoint is not destroyed, it will be suppressed anyway, after which the capture group will be able to capture it quickly and without loss. 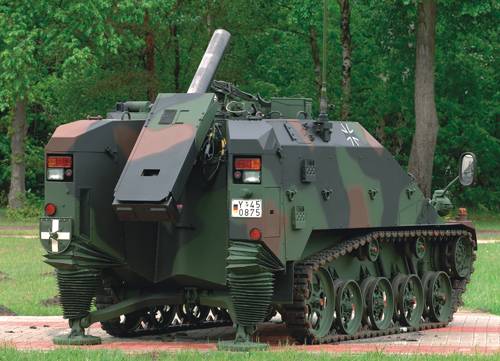 Mortar on the chassis of the combat vehicle "Wiesel". 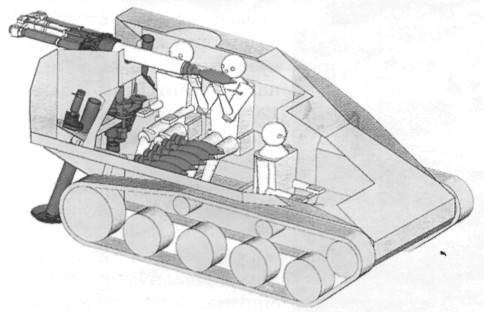 The device mortar on the chassis of the machine "Wiesel".

There are quite exotic projects, one of which is shown in our figure. Tower mortar, with an octahedral tower of complex configuration. It houses four blocks of 16 short barrels, in which there are 72 ready-to-use mines of caliber 81-82-mm. On the base of the tower, one block of long shafts is movably fixed with a crane system for regulating gas pressure. Blocks of short barrels, rotating together with the tower, are alternately combined with a block of long barrels. When this occurs, the loading: all the mines from the short barrels immediately fall into the long ones. The tower at the same time can rotate in all directions, since the block of long trunks is fixed in any position, and its elevation angle is always the same, as well as that of short trunks. 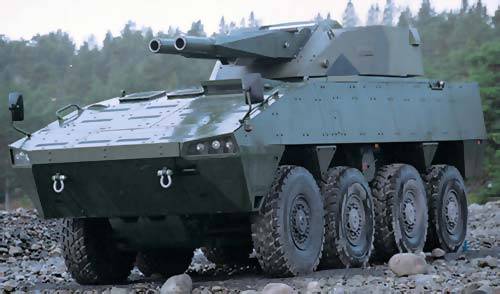 Then, a fully equipped block is aimed along with the turret at the target, the firing range is set with the help of a crane system, the armored cover of the blocks is opened and shots are fired either with a high rate or with a single fire. Such a device allows you to make 72 shots at a high rate, give four volleys of 16 mines each, or shoot single mines for quite a long time. The original system, is not it? However, one thing is to invent and patent it, and quite another - to achieve that the idea embodied in the metal! 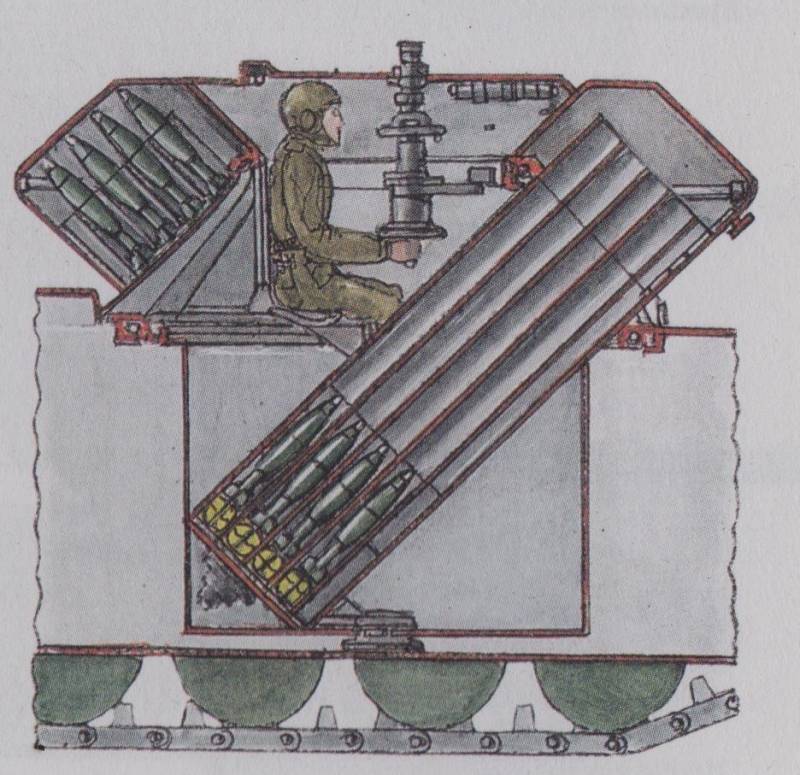 A mortar with four blocks of barrels and 72 mines in a rotating turret (draft). Fig. A. Shepsa.