January 15 2017
11
Electric wire barriers on the Russian front. What do we know about their device and application?


How effective electrified wire networks in a positional war, show the following facts. In December, 1915, having touched such a barrier at the town of Boyan, killed the reconnaissance officer of the 48 Infantry Regiment of Odessa. In the May 1916 offensive of the year, the 49 Infantry Regiment of the Brest Regiment immediately lost its 16 scouts. Ten more people who began to drag the dead were seriously injured. At the same time, in the 135 Infantry Regiment of the Kerch-Yenikalsky Regiment, the ensign was temporarily deprived of speech, and two soldiers, crawling up to barriers, were injured in the lower abdomen. This list can be continued. 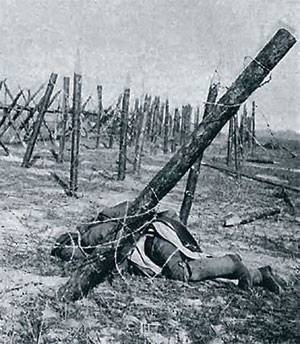 Especially big fans of such obstacles were the Austrians. By order of their command, from the end of 1915, wire nets comprising three bands, one under high voltage, were organized from Prut to Dniester, and in some places on other sectors of the Russian-Austrian front.

To power these obstacles, the Austrians used city or factory power plants equipped with the appropriate transformers and DC-to-AC converters. Underground cables (rated for voltages up to 20 thousand volts) were laid for several kilometers, so that the power sources were outside the range of the Russian artillery fire. Used and air wiring - on poles with special high-voltage insulators.

One of these stations, 1000 power kilowatt, was located in Chernivtsi and served for both urban needs and to power the wire barriers. And for the last goal was spent 2 / 3 generated energy. Another station, power 1500 kilowatt, was discovered at a sugar factory in Khreshchatyk, near Zalishchikov. Each fed a number of transformer substations located either in separate buildings or in special concrete shelters, some distance beyond the line of trenches. From the substations there was a current of already lower voltage - from 1500 to 5000 volts. In some areas, it was directed through distribution points directly to the wire barriers, and in others it entered a special cable laid across the trench bottom, from which wiring was made.

It should be noted that Austrian troops generally used electricity extensively. Russian soldiers found electric heaters in the enemy’s trenches, pumps for pumping out water, drilling machines for setting up mine galleries, fans, even engines (for example, for outboard roads laid around positions). Electric lighting was also widespread.

The wire nets, through which the current was allowed, were tensioned on wooden stakes, and the insulators were not used, the brackets served as fasteners. The ends of the stakes in the ground and above it were covered with an insulating resinous compound. In some cases, the composition of the stakes was covered with the upper part of the stakes in order to avoid their soaking with rain water. Electric barriers could be placed in isolation or among ordinary ones - in front of or even behind them. When wire nets were installed near Russian trenches, stakes were replaced with slingshots.

It is significant that individual projectiles, even of large caliber, could not neutralize such barriers. By forming a funnel, they often did not break the power cable. Getting into the barrier, the shells cracked and confused the wire, but the contacts between its parts remained. And some ends were grounded and electrified the earth. Which also represented a great danger. Moreover, in order to keep the barriers under tension when the wires were broken, they usually made several supply branches and the network was divided into appropriate sections. And only where for several meters the wire was completely demolished by artillery, the electrification was no longer dangerous.

For cutting wire, including electrified, used special scissors. The so-called destructor, the device of Major General Milena, equipped with rubber insulators, was attached to the rifle. He was not afraid of the voltage up to 2000 volts, was used for lying actions. The intruder did not interfere with shooting or bayonet fighting, was simple and functional. Ordinary hand scissors — samples of the engineers of Romanov and Goshkevich — could be adapted for cutting electric wire.

The Russian army not only fought against the electric obstacles of the enemy, but also used them itself, albeit on a smaller scale. For example, in the 12 Army of the Northern Front in the Riga military sector, four automotive power stations fed a network of 12 kilometers in length (and taking into account the cable, over 50 kilometers). Served such networks special electrical teams.

Such barriers proved to be effective during the period of positional warfare, hindering search actions. They were the scourge of military intelligence officers. With large-scale hostilities, accompanied by powerful artillery preparation, the value of electrical wire networks dropped sharply.