Paris Battle of the Crimean War

January 15 2017
49
When they talk about the heroes of wars, the fighters of the secret, diplomatic front are forgotten. Meanwhile, their services to the Fatherland are hard to overestimate.


In the Crimean War, we were opposed by the British, French and Ottoman empires, as well as the Kingdom of Sardinia-Piedmont. At the end of the confrontation, Austria and Prussia declared their readiness to join the anti-Russian coalition in our country. At any moment, Sweden, which led secret negotiations with Napoleon III, could join them, concluded an alliance with France and undertook to attack us with 60 numbers of thousands of people. With the filing of Istanbul, Russian fortified points in Central Asia were subjected to raids by detachments led by local “authorities”. It was not ruled out that Iran would begin hostilities in the Transcaucasus. 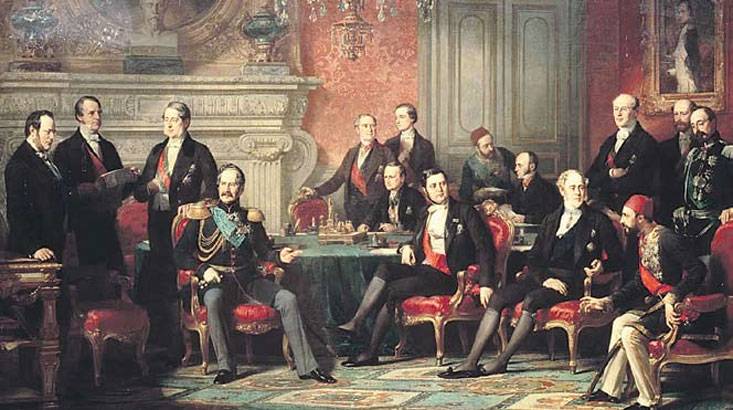 The Russian army bristled with bayonets along a giant border. Our troops stood in the Kingdom of Poland, the Baltic States, Finland, the Crimea and Novorossia, in the Caucasus and Transcaucasia. Total 784 general, 20 thousands of officers, 974 556 lower ranks, and in reserve 113 generals, 7763 officer and 572 158 lower ranks. In the militia were 240 thousand, Cossacks - 120 755 people.

Is it a lot or a little? The estimation of General Bogdanovich is well known: “By the spring of 1856, we could meet the enemy at any point of our borders with considerable forces.”

But did Russia need a war with a coalition of the world's strongest countries? To discuss this issue, Alexander II convened a council of the first persons of the state. Chancellor KV Nesselrode, Adjutant General MS S. Vorontsov, Minister of State Property P. D. Kiselev, Chief of the Gendarmes and Chief Head III of the Imperial Chancellery, Count A. F. Orlov, and President Academy of Sciences D. BC Bludov. Grand Duke Konstantin Nikolaevich, diplomat P. K. Meyendorf, and war minister Prince V. A. Dolgorukov were additionally invited to the second meeting in two weeks.

Alexander II knew in general what concessions the European coalition would require from him. If at the beginning of hostilities the enemy set a goal to dismember Russia, tearing away vast territories of present-day Ukraine, Belarus, the Baltic countries, Crimea, the Caucasus, Finland and even Petersburg, then in 1856 the issue of dividing Russia was no longer there and the king agreed to negotiations .

February 25 congress of representatives of the great powers gathered in Paris. The discussion itself shows that Russia did not behave like a broken country. Thus, for example, the Austrians demanded Bessarabia from us, which was followed by a threateningly harsh answer from Count Orlov: “Mr. Austrian Commissioner does not know what kind of sea of ​​tears and blood such a correction of borders will cost his country.”

Then Orlov, in a mocking form, laid siege to the Foreign Secretary of England, Count Clarendon. Russia agreed to “neutralize the Black Sea”, that is, not to keep naval arsenals on its shores and not to restore the fleet here. But besides Sevastopol, Russia had another Black Sea base, Nikolaev, which also had shipyards and a military arsenal. The British believed that the city should be disarmed, and its shipyards would be destroyed in accordance with the peace treaty. However, Orlov said: Nikolaev is not on the Black Sea coast, but on the Bug River and the terms of the contract do not apply to it. Everyone knew that the Bug estuary is part of the Black Sea, it is navigable even for large ships, which means that Orlov scoffs, but could not do anything. Moreover, Russia defended the right to keep several ships in the Black Sea and Orlov, for the sake of fear, assured the “Western partners” that, if necessary, Petersburg would build these ships in Nikolaev.

During negotiations, a dispute broke out regarding the Russian forts on the east coast of the Black Sea. Some of them were blown up during the war, and Clarendon declared that the forts are essentially the same arsenals, only called differently. Therefore, Russia has no right to restore them. Orlov did not agree with him: in his opinion, the fort and the arsenal are different things and Russia is not going to fulfill the demands of Britain.

The British tried to raise the economic issue, demanding to make Sevastopol a duty-free zone, but they did not achieve anything here either. Of course, our country did not pay indemnity either.

Klarendon is one of the best, trying to get Russia to recognize the independence of Circassia. He used all sorts of ways to put pressure on the Russian delegation, but Orlov showed firmness here too.

The anti-Russian coalition has returned to us all the territories that it managed to occupy during the war, in exchange for Kars with the environs captured by Russia from Turkey. The only loss for us was a small section of Bessarabia at the mouth of the Danube, which was relegated to the Moldavian principality. Formally, it was part of the Ottoman Empire, but at the Paris Congress it was confirmed (and also of Wallachia and Serbia) the broadest autonomy. Accordingly, the land did not even go to the Ottomans, but to the Moldavian principality.

This is all that the huge European coalition has achieved from Russia, having paid for the insignificant concessions a huge price in the form of enormous human losses and astronomical sums of money.

Moreover, Orlov forced Istanbul to agree not to keep arsenals on its Black Sea coast, to give guarantees to the rights and privileges of the Christian population of the Ottoman Empire.

So for Russia, the treaty that ended the war turned out to be not shameful. When, in London, they learned how insignificant the concessions made by Russia had erupted a grand scandal. In the House of Lords, they indignantly and mercilessly criticized not only their diplomats, but also Prime Minister Henry Palmerston. The degree of indignation of venerable gentlemen is clearly visible from the angry speech of Lord Manners: “They say that there is a map on which many of these places are marked as independent lords as independent ... did we have any chance at the moment to make them independent? If we have to make them independent, then I cannot find words to characterize the baseness of the policy of England in this case. You supply Circassians weapons, you campaign in alliance with them, you do not regret any weapon or ammunition so that they can vigorously fight against a common enemy, and after they saved Kars fortress for you, which you couldn’t save by your own strength, you refuse and allow Russia to fulfill its conquest plans in Asia. ”

Ratification of the Treaty of Paris was in question, and yet the ruling circles of England put up with the inevitable. The agreement with Russia entered into force.

Let us pay tribute to the Russian delegation at the Paris Congress, especially to Count Orlov, who in difficult conditions firmly defended the interests of the Motherland, setting a fine example for the modern generation of our diplomats.