January 14 2017
7
The internal political situation in Algeria is not least connected with the neighboring Western Sahara, the Spanish ex-colony, where for more than 40 years the local rebels, the Frente POLISARIO, have been fighting with the Moroccan army. 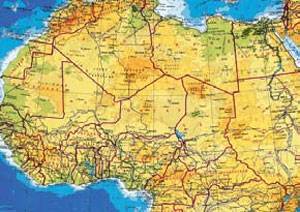 Rabat considers this region its territory, but Algeria still helps the rebels. And recognizes the sovereignty of the Saharawi Arab Democratic Republic (SADR) proclaimed by this February 27 front of the 1976 year.

According to many experts, Rabat fears that the victory of POLISARIO and the full recognition of the SADR by the UN will allow Algeria to freely go to the Atlantic and thereby “surround” Morocco. Such a scenario would give control over the colossal resources of high-quality phosphate ore in Western Sahara, as well as large reserves of oil on the adjacent shelf. Morocco, we recall, is a net importer of black gold and up to 30 percent of the volume of consumed petroleum products. But whether it is in the interests of the West to increase the resource potential and political and economic influence of Algeria in the region is a question ... One can say the first confirmation of the anti-Algerian position is the participation of the French Air Force in 1958 in Spain’s military actions against Western Saharan guerrillas. The same thing happened in 1978. The French Air Force in support of the Moroccan military operation bombarded the positions of POLISARIO (Operation "Manatee").

Near the border with Western Sahara, that is, in the west and south-west of Algeria, with 70-x are refugee camps, of which there are many tens of thousands. In Morocco, they consider these camps as training centers for POLISARIO fighters. Such accusations, of course, complicate the already difficult Algerian-Moroccan relationship.

I recall that in Madrid in November 1975, Spain, Morocco and Mauritania agreed on the division of Western Sahara (in proportion of 70 and 30 percent) between Rabat and Nouakchott. The Algerian side formally condemned this document, likening it to the Munich conspiracy of 1938. Meanwhile, until the end of the 60-s in Morocco officially claimed to Mauritania, which is reflected in the Soviet directory "Countries of the World." And it says that the claims are not unreasonable (M., Politizdat, 1962, p. 237).

Therefore, the Moorish-Algerian political-economic rapprochement began in the middle of the 60-s. By the end of 70's, it was transformed into a single position on Western Sahara. In August, 1979, Mauritania signed a peace treaty with POLISARIO, which included the abandonment of "its" (southern) part of Western Sahara. Soon, Nouakchott recognized SADR as a sovereign state. But at the end of 1979, Moroccan troops captured almost the entire ex-Moorish part of Western Sahara.

The ceasefire regime prescribed by the UN since the fall of 1991 is under threat today. This is due, according to the leadership of SADR, with Morocco’s plans to resume military operations in Western Sahara under the pretext of fighting Islamist groups and drug trafficking. Anyway, up to 80 percent of the territory and the entire shelf, where the main mineral resources of Western Sahara are located, are controlled by Moroccan troops. But Rabat’s military activity against the POLISARIO will most likely be limited, for the same groups recently promised to release Ceuta, Melilla and the islands off the northern coast of Morocco from the Western occupation. These coastal enclaves of Spain still persist in the Moroccan north. But in their respect Rabat is much less determined than in the Western Sahara ...

By the way, the USSR and the PRC in 70 and later did not succumb to the persuasions of Algeria to support its position in this region and officially recognize the SADR. But Russia and even before 20 countries (including Spain, the UK, Brazil) recognize the right of Western Saharan to self-determination through a referendum under the auspices of the UN (China officially recognizes Western Sahara as part of Morocco). And for example, Azerbaijan, Belarus, Poland, Saudi Arabia, the United States, Turkey, France stand for the autonomy of the region within Morocco. The UN in 1980– 2000-x, on the initiative of Algeria, adopted over 15 documents on the organization and conduct of a referendum among Western Saharis (including refugees) on self-determination of the region. But these solutions have not been implemented ...

The self-proclaimed SADR qualifies in the UN as non-colonized territory and is included in the list of Non-Self-Governing. Nearly two-thirds (120) of UN members, including the Russian Federation, agree with this status of Western Sahara, and 60 states, including most African, officially recognize SADR independence. Only 22 countries count as part of Morocco Western Sahara.

With regard to the autonomy of the region, here lies the economic interests of those who favor it. First of all, the United States and France. The fact is that, according to the US Geological Survey, the UN Economic Commission for Africa and several other sources (2015 – 2016), the proven reserves of high-grade phosphate ore in Western Sahara are no less than 10,6 billion tons. This is 26 percent global. The largest Bu-Kraa deposit with reserves of up to 1,6 billion tons (and with a record 70-percentage of phosphate rock in the ore) is not far from the border with Morocco.

According to the German chemical expert Horst Enger, “a high proportion of mineral in the rock, shallow phosphate-bearing formations and proximity of Bu Krau to the Atlantic coast (no more than 80 kilometers) significantly reduce the costs of extraction and export of phosphates. By the middle of 70, German companies had built from Bu-Kraa to Lablay terminal in the port of Laayoune, renamed POLISARIO to Dakhla, a transport corridor with a throughput of 15 million tons of phosphate ore per year. ” Almost all of the phosphate subsoil in SADR is controlled by Morocco, but a characteristic fact is that about 40 percent of the annual production volume at Bu Kraa is exported to the USA, and up to 35 percent - to Western Europe.

The explored hydrocarbon reserves on the shelf near SADR and in its other areas are estimated by Western companies in 14 – 17 million barrels of oil and 2,2 – 3,5 billion cubic meters of gas. But the estimated reserves here are at least three times more.

Hence, the proposals of a number of Western importing countries on the autonomy of the region within Morocco. But to completely separate the region and, therefore, to allow Algeria into these “bins” is hardly in the long-term interests of Western business.