Kovrovets returns to the shores of Syria

January 9 2017
38
The naval minesweeper of the Black Sea was included in the eastern Mediterranean on the basis of the rotation program fleet "Kovrovets." From a statement by the official representative of the Black Sea Fleet, Captain 1st Rank Vyacheslav Trukhachev:
The anti-mine ship on the basis of the planned rotation will replace the group of the same type sea minesweeper "Ivan Golubets", which operated in the far operational zone for more than four months. 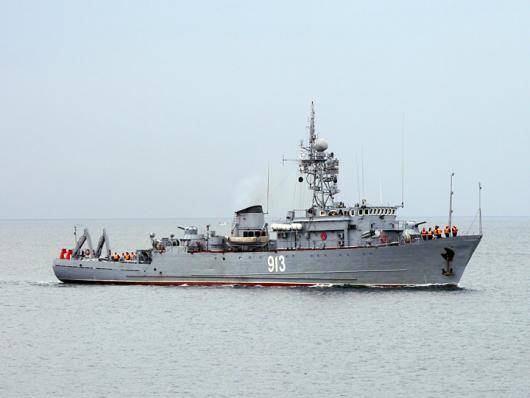 Previously, reports appeared with reference to sources in the Russian Defense Ministry that the Admiral Kuznetsov TARK and the nuclear-powered cruiser Peter the Great would depart from the Mediterranean to their home sites in the near future.

For reference: "Kovrovets" - minesweeper, tail number 913. It is used for wiring behind surface ship trawls, laying of fairways in minefields in the fields, as well as for setting minefields.