January 9 2017
36
Often on the pages of "Military Review" there are materials dedicated to the heroes of years gone by with stories about their exploits. Our goal is not only to recall that in stories Russia has a whole galaxy of people who, by their courage and heroism, have proved loyalty to serving the Fatherland, but also talk about the connection between generations, which transmits the gene of self-sacrifice for the sake of their homeland invisibly and intangibly. Less often on our site there are materials about the heroes of today's day, and this, in fairness, is perhaps our omission.


Today's material about one of those whose name, whose words and whose courage became known throughout Russia. This is about Magomed Nurbagandov - police lieutenant, who today - 9 January 2017 of the year - would have turned 32 of the year.

21 September 2016 was awarded the title of Hero of the Russian Federation for courage and heroism shown in the line of duty, on the basis of presidential decree No. 486, Lieutenant Magomed Nurbagandovich Nurbagandov. The hero's star in the Kremlin was received by his parents, Nurbagand and Kumsiyat Nurbagandov, whom President Vladimir Putin personally thanked for raising his son with a real man and hero. 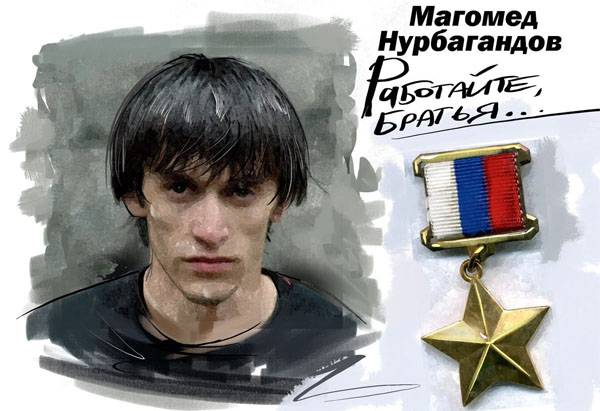 9 July 2016, Magomed, along with several members of his family, went to rest in a forest near the village of Sergokala. Later in the evening, the women and several men from the large Nurbagandov family returned to the village, while Magomed and his cousins ​​Abdurashid and three brothers of school age stayed in the forest for the night in tents. A few hours later, armed men appeared in the family tourist camp, who tried to impose, so to speak, “their own rules” upon learning that they had stumbled upon representatives of law enforcement agencies. One of the armed men hit the sleeping 10-year-old boy with his foot. Abdurashid, who woke up and was shot by a Stechkin pistol in the head, interceded for his brother.

After that, armed people, tying the only surviving adult in the family tourist camp of a man (he was Magomed), pushed him into the trunk of a car belonging to the large Nurbagandov family. A few hundred meters from the camp, the militants stopped the car and put Lieutenant Nurbagandov on their knees.

On a cell phone camera, one of the militants demonstrated the certificate of Magomed Nurbagandov, calling him “kafir” (“infidel”). Another fighter who was filming demanded that Magomed turn to other police officers to “stop working” - they left the internal affairs bodies.

These two seemingly simple words that Magomed could also address to members of his family who worked in the bodies became, in essence, an appeal to all police officers in the Russian Federation; a real motto for those who value honor and are ready to serve the Fatherland to the end.

About the words of Magomed Nurbagandov, expressed in the face of the militants, as a result of shooting a policeman in the forest near Sergokaly, perhaps we would never have known if it were not for the activities of other Russian law enforcement officers. Militants first published a video with the shooting of Magomed, cutting out from the video the very appeal that he made to police officers.

But the gang that attacked the Nurbagandov family in the forest of Dagestan was calculated and eliminated. Several of its members were neutralized in Makhachkala, several in the city of Izberbash. A mobile phone was found at one of the fighters, and the massacre of Abdurashid and Magomed Nurbagandovs was filmed on his camera. A full version was kept in the phone’s memory, which told the country about the words spoken a moment before his death by police lieutenant Nurbagandov.

It is worth noting that the militants who committed the massacre in the forest near Sergokaly called themselves “soldiers of the“ Islamic State ”(the group is banned in Russia). Based on materials obtained from their mobile devices, the security services managed to reach out to contacts of a gang in the Republic of Dagestan and other regions of the North Caucasus, and ultimately eliminate criminal ties in several districts of Dagestan, neutralizing several ISIL recruiters.

Video interrogation of one of the militants who carried out attacks on police in Dagestan:

IN MEMORY OF MAGOMED NURBAGANDOV

A boy was born in the village of Dagestan
In a family with a warm atmosphere
Where children read good books, -
The village is called Sergokala.

The baby by the prophetic name of the grandfather,
To grow dzhigit dashing, he called.
And the years have passed, and the words of Magomed
In the Hero of Russia he was erected.

He was forced to his knees,
And hands are tied behind the back in the ring,
And the gun was sent to the terrorist
Not in the heart, not in the throat, but straight in the face.

And it was clear the collapse phenomenon -
Neither the sky nor the people will save, -
But the enemy did not see a bit of fear
In the fighter, over which repaired mob law.

The enemy demanded as if he was craving a spell:
"Say that work in uniform is a vice."
In response, it sounded: “Work, brothers”, -
And Kat furious pulled the trigger.

Magomed died, but you have the right to be proud
Both mother Kumsiyat and father Nurbagand:
Your son didn’t doubt one iota
That he is real and spirit giant.

The killer has already punished curses:
He is paid, as expected, hell.
On the cry of Magomed: "Work, brothers", -
The brothers answered: "We work, brother."

And they will work and beat the foe,
That the sun shone and the country sang,
And so that no one will forget about the soldier,
Saying two words for all times.

Your executioner was mistaken in deciding that he killed
You unarmed shot mean-spirited;
In fact, the path Thermopyla
You entered the immortality of the brave and proud.

Your words have become the motto for everyone
Eternity and people worship you.
And no matter how many milestones,
You will never be forgotten on Earth.

Your century was short - for thirty barely,
You lived quietly, but died a hero.
"Work, brothers" - steel words,
Filled with strength and firm attitude.

Your colleagues have come to work,
With trebled zeal rushed into battle -
Thugs are already turning into slime
Realizing that no one will weaken the catch.

You inspired, they want boys
Work on the guard of law and peace
For the heyday of the beloved country
And do not let Dagestan idol.

How much did you put into words at dawn -
Greatness of spirit and faith in victory!
You died in July, rose again in September -
And ave from now on sing Mohammed.

You are alive in millions of Russian hearts
Your image everywhere gives you hope
That evil and murder will end
And that the lost will have their eyes open.