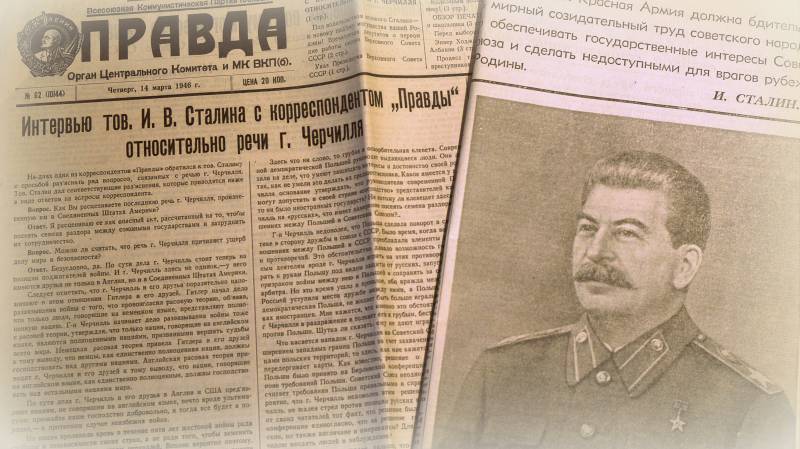 Question. How do you assess the last speech of Mr. Churchill, delivered by him in the United States of America?

Answer. I regard it as a dangerous act designed to sow the seeds of discord between the Allied states and impede their cooperation.

Question. Can Mr. Churchill's speech be considered detrimental to the cause of peace and security?

Essentially, Mr. Churchill and his friends in England and the United States impose on nations that do not speak English, something like an ultimatum: recognize our domination voluntarily, and then everything will be all right, otherwise war is inevitable.

But nations shed their blood for five years of brutal war for the sake of the freedom and independence of their countries, and not to replace the rule of Hitlers with the rule of Churchill. Therefore, it is likely that nations that do not speak English and constitute at the same time the vast majority of the world's population will not agree to go into new slavery.

The tragedy of Mr. Churchill is that he, like an inveterate Tory, does not understand this simple and obvious truth.

There is no doubt that the installation of Mr. Churchill is an installation for the war, a call for war with the USSR. It is also clear that such installation of Mr. Churchill is incompatible with the existing union treaty between England and the USSR. True, in order to confuse the readers, Churchill declares in passing that the term of the Soviet-English agreement on mutual assistance and cooperation could well be extended to 50 years. But how to combine such a statement by Mr. Churchill with his installation on the war with the USSR, with his preaching of the war against the USSR? It is clear that these things can not be combined. And if Mr. Churchill, who calls for war with the Soviet Union, at the same time considers it possible to extend the term of the Anglo-Soviet treaty to 50 years, it means that he views this treaty as an empty piece of paper, which he needs only to cover it and Disguise your anti-Soviet installation. Therefore, one cannot take seriously the false statements of Mr. Churchill's friends in England about extending the term of the Soviet-English treaty to 50 and more years. Extension of the contract does not make sense if one of the parties violates the contract and turns it into an empty piece of paper.

Question. How do you assess the part of Mr. Churchill’s speech where he attacks the democratic structure of our neighboring European states and where he criticizes the good-neighborly relations established between these states and the Soviet Union?

Answer. This part of Mr. Churchill’s speech is a mixture of slander elements with elements of rudeness and tactlessness.

Churchill claims that "Warsaw, Berlin, Prague, Vienna, Budapest, Belgrade, Bucharest, Sofia - all these famous cities and people in their districts are in the Soviet sphere and all are subject to one form or another not only to Soviet influence, but also greatly increasing Moscow’s control. " Mr. Churchill qualifies all of these as borderless "expansionist tendencies" of the Soviet Union.

It does not take much effort to show that Mr. Churchill rudely and unceremoniously slanders both Moscow and the neighboring states of the USSR.

Firstly, it is completely absurd to talk about the exclusive control of the USSR in Vienna and Berlin, where there are Allied Control Councils from representatives of four states and where the USSR has only the 1 / 4 part of the votes. It happens that other people can not slander, but you still need to know when to stop.

Mr. Churchill argues that "the Polish government, under Russian domination, was encouraged to huge and unjust encroachment on Germany."

There is not a word here, a rude and insulting slander. Modern democratic Poland is led by outstanding people. They proved in practice that they know how to protect the interests and dignity of the homeland in the way their predecessors did not. What is the basis for Mr. Churchill to assert that the leaders of present-day Poland can admit in their own country the "domination" of representatives of any foreign states? Is this why Mr. Churchill is slandering the "Russians" here, that he intends to sow the seeds of discord in relations between Poland and the Soviet Union? ..

Mr. Churchill is unhappy that Poland has made a turn in its policy towards friendship and alliance with the USSR. There was a time when elements of conflicts and contradictions prevailed in the relations between Poland and the USSR. This circumstance made it possible for statesmen like Mr. Churchill to play on these contradictions, to pick up Poland under the guise of protection from Russians, to intimidate Russia with the specter of war between her and Poland, and to preserve the position of arbitrator. But this time is a thing of the past, because the enmity between Poland and Russia has given way to friendship between them, and Poland, modern democratic Poland, does not want to be a playing ball in the hands of foreigners. It seems to me that it is precisely this circumstance that causes Mr. Churchill to irritation and pushes him to rude, tactless antics against Poland. It's no joke to say: he is not allowed to play for someone else's account ...

As for Mr. Churchill’s attacks on the Soviet Union in connection with the expansion of Poland’s western borders at the expense of Polish territories captured in the past by the Germans, here it seems to me that he clearly distorts the maps. As is known, the decision on the western borders of Poland was taken at the Berlin Conference of the Three Powers on the basis of the demands of Poland. The Soviet Union has repeatedly stated that it considers the demands of Poland correct and fair. It is likely that Mr. Churchill is unhappy with this decision. But why Mr. Churchill, not sparing the arrows against the Russian position on this issue, hides from his readers the fact that the decision was made at the Berlin Conference unanimously, that not only Russians, but also British and Americans, voted for the decision? Why did Mr. Churchill need to mislead people?

Churchill argues further that "the communist parties, which were very small in all these Eastern European states, have achieved exceptional strength far outnumbering them and are seeking to establish totalitarian control everywhere, police governments prevail in almost all these countries and to date with the exception of Czechoslovakia, there is no true democracy in them. "

As it is known, in England one party controls the state now, the Labor Party, and the opposition parties are deprived of the right to participate in the government of England. This is called by Mr. Churchill genuine democracy. In Poland, Romania, Yugoslavia, Bulgaria, Hungary a bloc of several parties controls - from four to six parties, and the opposition, if it is more or less loyal, is guaranteed the right to participate in the government. This is called in Mr. Churchill's totalitarianism, tyranny, police. Why, on what basis, do not expect an answer from Mr. Churchill. Mr. Churchill does not understand the ridiculous position in which he puts himself with his noisy speeches about totalitarianism, tyranny, and the police.

Mr. Churchill would like Poland to be ruled by Sosnkovsky and Anders, Yugoslavia - Mikhailovich and Pavelic, Romania - Prince Stirbey and Radescu, Hungary and Austria - some king from the house of the Habsburgs, etc. Mr. Churchill wants to assure us that these are the Lord of fascist gateways can provide "true democracy." Such is the "democratism" of Mr. Churchill.

Mr. Churchill wanders around the truth when he talks about the growing influence of the communist parties in Eastern Europe. It should, however, be noted that it is not entirely accurate. The influence of the communist parties grew not only in Eastern Europe, but in almost all European countries where fascism previously dominated (Italy, Germany, Hungary, Bulgaria, Finland) or where German, Italian or Hungarian occupation took place (France, Belgium, Holland, Norway , Denmark, Poland, Czechoslovakia, Yugoslavia, Greece, the Soviet Union, etc.).

The growing influence of the Communists can not be considered an accident. It is a completely natural phenomenon. The influence of the communists grew because in the difficult years of the domination of fascism in Europe, the communists turned out to be reliable, courageous, selfless fighters against the fascist regime, for the freedom of nations. Mr. Churchill sometimes recalls in his speeches about “ordinary people from small houses”, patting their shoulders and pretending to be their friend. But these people are not as simple as it may seem at first glance. They, the "ordinary people", have their own views, their own politics, and they know how to stand up for themselves. It was they, millions of these “ordinary people,” who had swamped Mr Churchill and his party in England, casting their votes for the Laborites. It was they, millions of these "ordinary people", who isolated the reactionaries and supporters of cooperation with fascism in Europe and preferred left-wing democratic parties. It was they, millions of these "ordinary people" who, having tested the communists in the fire of struggle and resistance to fascism, decided that the communists fully deserve the trust of the people. This is how the influence of the communists grew in Europe. Such is the law of historical development.

Of course, Mr. Churchill does not like this development of events, and he sounded the alarm, appealing to the force. But he also did not like the appearance of the Soviet regime in Russia after the First World War. He also sounded the alarm and organized a military campaign of "14 states" against Russia, setting himself the goal of turning back the wheel stories. But the story was stronger than the Churchill intervention, and the quixotic habits of Mr. Churchill led to the fact that he suffered a complete defeat. I do not know whether Mr. Churchill and his friends will succeed in organizing a new campaign against Eastern Europe after the Second World War. But if they succeed, which is unlikely, because millions of “ordinary people” are guarding the affairs of the world, then we can confidently say that they will be beaten just like they were in the past, 26 years ago.