Black anniversary in the Russian economy

January 5 2017
125
Exactly 25 years ago, the government of the Russian Federation made a decisive step into the abyss of a market economy. It all started 2 January 1992 of the year with the liberalization of retail prices. Later, her and other steps of the Russian authorities will be called "shock therapy of the economy", or "Gaidar's reforms." Shock really was. It's true. For some reason, I remember an ordinary jar of sour cream from that time (then it was sold in glass containers). Before the holiday, at the end of December 1991, I bought it at 1 ruble 40 kopecks. After the new year on the price tag of the nearest store stood - 14 rubles. And it was a shock! 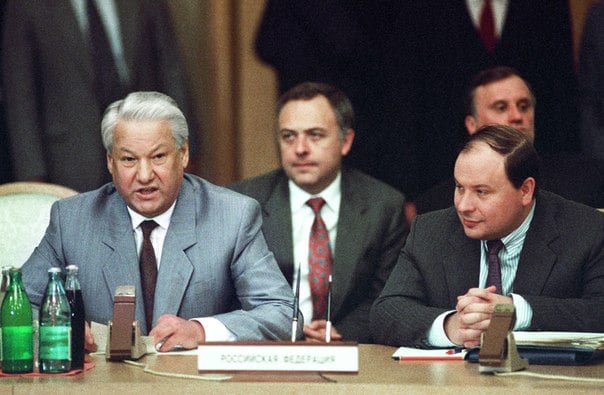 According to the International Monetary Fund patterns

Later, official statistics will report that in the first month of liberalization, prices rose 3,5 times (by 345,3%). But this is how the average temperature in the hospital. The armored beds that were not in demand, for example, did not rise in price, and the prices of products rushed ten or more times. The statisticians put it all together, divided and received the very 345,3%, which then, like a flag, pseudo-reformers will wave to justify their professional incompetence and human dishonesty.

It all started in the fall of 1991. In October, President Boris Yeltsin announced proposals for improving the country's economy at the V Congress of People's Deputies of the Russian Federation. They included privatization, price liberalization, commodity intervention, the conversion of the ruble. They decided to start with price liberalization. She was assigned first to December 1, then transferred to the 16. Then finally decided - 2 January 1992 of the year.

All these transfers the government official explained the disagreement of the other Union republics with the proposed measures. In fact, the real center of the country, which existed at that time and, above all, the USSR State Bank, was the real brake on Russian initiatives.

This barrier will be removed in Belovezhskaya Pushcha 8 December 1991 of the year. Here, in the suburban government residence "Viskuli", the leaders of Belarus, Russia and Ukraine, by the right of the founders of the USSR, will sign an agreement on its dissolution. The government of the Russian Federation will open a direct road to market reforms.

They were prepared by a group of Russian economists headed by Yegor Gaidar. All the events of “shock therapy” will be associated with his name, they will be called “Gaidar's reforms”, which will become an excessive exaggeration for this odious person now for many Russians.

Egor Timurovich Gaidar received a classical Soviet-era education at the economic faculty of Moscow State University. Then there were postgraduate studies, work in the Research Institute of System Studies, the journal of the Communist Party Central Committee Kommunist, and the economics department of the Pravda newspaper.

So Yegor Gaidar grew to the post of director of the Institute of Economic Policy of the Academy of National Economy of the USSR. Her Gaidar took at the end of 1990 of the year. By that time, a group of ambitious young economists had formed around him. Something like popular at the time of informal associations of interests.

In the summer of 1990, interest in socialist economy reforms led this group to the Hungarian city of Sopron. Here, American economists (William Nordhaus of Yale University, Rudiger Dornbusch of the Massachusetts Institute of Technology and others) held a seminar where they instructed socialist ignoramuses on the program of radical economic reforms.

At the seminar in Sopron, the future "reformers" of Russia - Yegor Gaidar, Anatoly Chubais, Peter Aven and other people now known in the country listened to the reports of Western experts. Topics were very special. The seminar dealt with shock therapy, price liberalization, financial stabilization while minimizing government spending and other radical reforms necessary for the transition to the market.

After a year and a half, all this joy through the efforts of the Gaidar group will overwhelm Russia. It must be said that Nordhaus, Dornbush and the company were not taught by Russian economists according to their textbooks. A year earlier, the English economist John Williamson formulated a set of rules of economic policy for Latin American countries, prescribing how to rise to the level of developed countries.

The principles formed by Williamson reflected the position of the American administration, the International Monetary Fund, the World Bank, and leading American think tanks with headquarters in Washington. Hence came the term for the rules of John Williamson - “Washington Consensus”.

Even a quick glance at the rules of Williamson shows from where the feet of Gaidar's reforms “grow.” It seems that this information will be very useful to people who still see in Yegor Gaidar an innovator and pioneer of the new postsocialist economy. It is clear that Gaidar did exactly as prescribed in the Washington Consensus.

Ruslan Khasbulatov directly speaks about this. Also, by the way, an economist, a corresponding member of the Russian Academy of Sciences. In 1991, Khasbulatov headed the Supreme Council of the Russian Federation and chaired the V Congress of People's Deputies, which made dramatic decisions for the country.

Ruslan Imranovich testifies: “the reform program in Russia as an integral document” did not exist. The transformations that were launched in January of 1992 and were called “shock therapy” were based on “strict recommendations and requirements of the International Monetary Fund”.

Where did the “Gaidar team” lead Russia?

Nevertheless, the government propaganda machine declared Yegor Gaidar a reformer. Responsibility for the trouble that this young team brought to the country fell on him. Nevertheless, her actions are still trying to justify. These days, the black anniversary of the “Gaidar reforms”, it would seem, no one should have any illusions about the disastrous results of the work of the Yeltsin-Gaidar government for the country. (Let me remind you that Yegor Gaidar was only the Deputy Chairman of the Government of the RSFSR on economic policy issues, who received unlimited carte blanche for actions.)

However, many resources recalled the “reforms” and praised Gaidar for the fact that he “saved the country from starvation”. No serious facts were given to substantiate this argument, but they were illustrated with photographs of empty counters in food stores of that time. Really.

The food supply difficulties at the end of 1991 were incredible. People could not even buy groceries. The thing is that this problem was created by the irresponsible team of Gaidar. Having dragged the decree on the release of retail prices in October through the Congress of Deputies, the “government of reformers” made a two-month pause before the decision came into effect.

Naturally, we stopped waiting for the upcoming income and food suppliers. They had something to trade. In the 1991 year, although not the most fruitful, the Russian Federation collected 90 million tons of grain, chopped up more than 9 million tons of meat, fed more than 50 million tons of milk. So sour cream for 14 rubles per jar stood on the January 1992 counter of the year from domestic raw materials.

After the “Gaidar reforms”, production in all sectors without exception will collapse, people will lose their jobs and income. For many years, experts will compare the Russian economy with the level of 1991 of the year. On grain, the country will return to it only in 2008, on meat - in 2015, on milk it will not rise until now. Today, Russian livestock breeders rejoice at the annual 30 million tons of milk.

Academician Oleg Bogomolov, in the midst of reformatory raging, wrote that allegations about the critical state of the economy were myths that Gaidar had armed propaganda to justify his policies. To justify was for what.

The production of goods and products in the country suffered incredibly. At that time there was an established order for years. The manufacturer shipped the finished product and immediately put a collection order to the bank for its payment. Money is debited from the account to the account. Now he went to the new prices. As a result, within a few weeks, the circulation of circulation swept to dryness the working capital of enterprises and led to a non-payment crisis.

In the summer, the new chairman of the Russian Central Bank, Viktor Gerashchenko, managed to solve this problem through a multi-stage system of netting. By the fall, non-payments had grown with a new force and had destroyed many quite efficient enterprises. How else? In the Washington Consensus on the preservation of industry, Gaidar was not prescribed anything.

On the contrary, as we remember, Western ideologists of economic shock generally excluded from their proposals the financing of defense, industry, other sectors of the economy, and even social obligations. Left only education, health and infrastructure. So the Russian government acted.

The budget is thoroughly spoiled. State investments were cut by 1,7 times, arms purchases - by 5 times. In order to save budgetary funds, underwater missile carriers, missile systems and missiles, airplanes, warships, unique missile railroad complexes, and many other things constituting the military power of Russia were launched under the knife.

You can write a lot about the troubles brought to the country by the Yeltsin – Gaidar government. Sometimes people ask themselves: was it worth it to break the economy in such a way as to move to the market with its often dubious advantages? Advanced economists answer memorized: the state economy is inefficient.

In this case, somehow forget the example of the former British Prime Minister Margaret Thatcher. The Thatcher government without hesitation nationalized unprofitable British enterprises. Sanitized them, brought to mind. Then sold with profit. Yes, and the Russian economy largely rests today, as on pillars, on state corporations.

Finally, maybe the transition to the market should have been made less painful, not shock. There is an example of China, Vietnam and other countries. Gaidar himself said that at the time of the formulation of reforms, the Chinese economy was extremely weak and could not serve as an example to follow.
Knowledgeable people consider this excuse of the “reformer” as slyness.

Academician Oleg Bogomolov, already mentioned here, for example, believed that "the right and less painful way of transition to the market is not shock therapy, but the purposeful and steady deployment of market institutions and tools in a two-sector economy."

A gradual transition to the market was considered by the Russian authorities, but was rejected. Yegor Gaidar was assisted by the head of a group of economic advisers to Russian President Boris Yeltsin, an American, Jeffrey Sachs. The overseas expert convinced Yeltsin that the gradual transformation of the economy carries with it the risks of the return of the communists to power. A guarantee of this can only be quick reforms.

It is Gaidar's star time and black time is for Russia. Since then, 25 years have passed. The country has gone through economic hard times, but never fully recovered from it. Time and people could not heal all the wounds inflicted on Russia by reformers Yegor Gaidar ...