To achieve peace in Ukraine, the Germans did not have the courage?

January 6 2017
51
The German Foreign Minister Frank-Walter Steinmeier made a bad forecast on Deutsche Welle. He said: “Crises and conflicts will continue in the 2017 year, but do not lose hope. It takes courage to achieve peace. We must save it. ” The Germans are now paying special attention to the statements of the head of their Foreign Ministry. Frank-Walter Steinmeier is more likely to become the new president of Germany in February. His candidacy was supported by both parties of the ruling coalition. 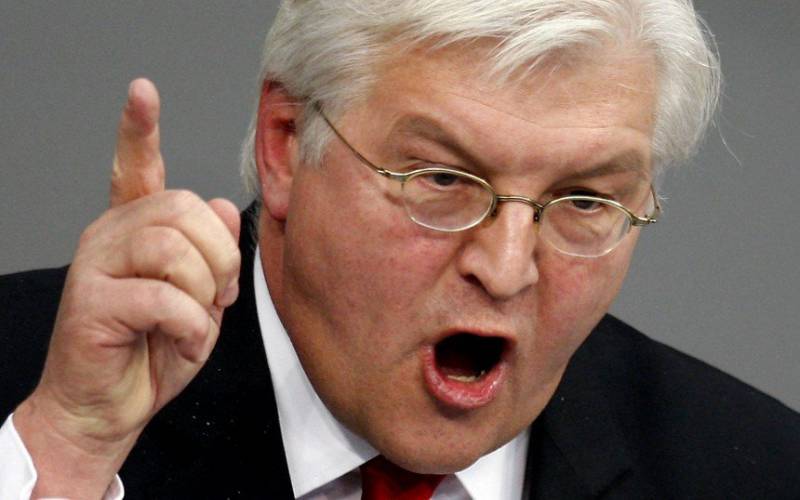 How Steinmeier made a bid to resolve the Ukrainian crisis

Steinmeier’s assessment may be interesting to us because last year Germany chaired the OSCE, and the current pessimism of the German minister (“Rarely the arrival of a new year is accompanied by so many open questions in world politics.”) Is also a direct result of German labor in the field of European security. .

Last January, when he assumed the OSCE chairmanship, Frank-Walter Steinmeier made many loud statements. In particular, assessing the political situation on the continent, he said: “Germany assumes the chairmanship of the OSCE in unstable times. We are probably in front of the most serious threats to peace and security in Europe since the end of the cold war. Germany is ready to take responsibility. ”

This was the second for history OSCE chairmanship of Germany in the organization. For the first time such a role for Berlin fell in the distant 1991 year. The Germans then could not be noted independent policies. That year the fading Soviet Union raged. The process was controlled from overseas. Europe and its political structures got a political role of the second plan.

The new coming of the Germans to the crest of the all-European security policy happened at a time when the word of Berlin in Europe gained considerable weight. Sometimes the word was indisputable for the German partners in the European Union. Therefore, from the chairmanship of Berlin in the OSCE, everyone expected to be effective, reducing tension in the hot spots of the continent.

It was this application that the head of the German Foreign Ministry himself made, joining the powers of the OSCE chairman. (According to the established tradition, this post is held by the foreign minister of the country, who is taking over the chairmanship of the organization.) Steinmeier called for the restoration of "stable security" in Europe, the peaceful resolution of "an ever-increasing number of crises and conflicts," the restoration of lost trust within the organization. Among the OSCE priorities in 2016, the new chairman of the organization called the settlement of the Ukrainian conflict.

Such a choice seemed completely natural. After all, Frank-Walter Steinmeier was at the origin of the Ukrainian conflict. He was among those European politicians who signed guarantees for the peaceful transfer of power in Kiev. Germany and its Foreign Ministry then initiated the negotiation process in Ukraine, when the guarantees of the Europeans did not work, and the opposition in the country escalated into a military conflict of citizens.

The war in Ukraine for some time managed to suspend the agreements concluded in Minsk. The OSCE was to establish control over the observance of the terms of the agreement, to deepen the process of peaceful resolution of the conflict. This task, according to experts, the European organization failed. Therefore, serious hopes were pinned on Germany and its foreign minister.

Steinmeier's first statements were encouraging. “In the past two years, we have seen that the OSCE represented the decisive mechanism for de-escalation and dialogue in Ukraine. We must continue to move in this direction, the new chairman of the OSCE urged the Europeans. “Germany intends to contribute to this with all its strength and capabilities.”


Why did Germany not fulfill its role?


It soon became clear that the words of the Germans at odds with the deeds. The OSCE observers, as they say, began to “whistle in one direction”, not burdening themselves with control over the actions of the Armed Forces of Ukraine. As a result, the heavy armaments of the Armed Forces of Ukraine, which had previously been assigned to the deep rear, approached the line of fire demarcation.

The shelling of settlements of the unrecognized republics has become more frequent. Gradually, they grew into a system. By the end of the year, the conflict had already passed into the stage of an open military clash with the seizure of neutral territory, killed, wounded and captured victims among civilians.

Instead of the de-escalation of the war declared by Steinmeier in the east of Ukraine, in fact, there was an increase in clashes. News the tapes are full of reports that Kiev is again pulling heavy artillery to the demarcation line and Tanks. Germany’s second mission to the OSCE ended in complete failure.

In Berlin, on this account is not visible experiences. It seems that during her OSCE chairmanship Germany set itself completely different goals, the main of which was to use the conflict in Ukraine to contain Russia. Exactly as prescribed from across the ocean.

Initially, this goal was not explicitly viewed. Over time, the rhetoric of Steinmeier began almost verbatim to repeat the lament of the Ukrainian President Poroshenko about the Russian aggression. Objective observers noted: the OSCE, under the chairmanship of Germany, began to identify with one of the parties to the conflict - with Kiev.

This was manifested most openly last December at the summit of the ministers of foreign affairs of the OSCE participating States in Hamburg. Anticipating the forum, Steinmeier met with journalists, promised them to consider in the European Union the issue of extending sanctions against Russia and said that "the tone of dialogue between East and West has become harsher."

The message of the OSCE chairman was picked up by his colleagues, European ministers. The topic of anti-Russian sanctions has become central to their speeches. If it was said about the crisis in Ukraine, then at best it was about the mutual responsibility of the parties to the conflict for the implementation of the Minsk agreements. Military activity of Kiev in Hamburg tried not to notice.

Russian Foreign Minister Sergei Lavrov had to remind the forum participants: “If you want to invite a partner to the dialogue, you should not begin the invitation with accusations against him and with the requirements to conduct a conversation solely on your ultimatum conditions. Such attempts undermine the very basis of the OSCE. ”

Sergey Lavrov specified the position of Russia at a personal meeting with the chairman of the OSCE, German Foreign Minister Frank-Walter Steinmeier, which took place in the evening after the plenary meeting. There are few details about her. Unless RIA Novosti, citing a source in the German delegation, said: the conversation was "serious and long."

Judging by the events that followed, the parties, as they say, “remained with their own.” The Germans did not find any responsibility they claimed, much less the promised courage to bring the Ukrainian conflict to a peaceful track. A week later, the EU extended anti-Russian sanctions. Kiev authorities have nothing to hold back. They unleashed fighting almost the entire line of demarcation.

Now it can be taken as a fact. While chairing the OSCE, Germany has not fulfilled any of its goals. Verbal threats and real sanctions Russia could not be kept. Moved over the foreseeable horizon and the prospects for the peaceful resolution of the Ukrainian conflict. These two circumstances show Europe that Berlin is not in a position to seriously influence the state of affairs on the continent and pursue an independent policy.

Austria has already made its conclusion from the German failure, which since 1 in January 2017 passed the chairmanship to the OSCE. On the eve of the new year, Austrian Foreign Minister Sebastian Kurtz in an interview with Der Spiegel did not criticize his German counterpart for failing his mission, but announced a change of priorities.

Kurtz said he would seek easing of EU sanctions against Russia. The Austrian Minister stated: with the beginning of the crisis in Ukraine, there was a return to the bloc mentality of the Cold War. Sane Europeans are worried.

“We must restore confidence in Europe, and transform sanctions from a punishment system into a system of incentives,” the Austrian Foreign Minister said to the German magazine, and added, “To respond to every positive development on the ground by gradually easing sanctions.”

It is appropriate to recall the unshakable position of Berlin, more than once publicly stated by Federal Chancellor Angela Merkel and Foreign Minister Frank-Walter Steinmeier: "Sanctions against Russia can be lifted only after Moscow fully implements the Minsk agreements on resolving the conflict in eastern Ukraine."

Maybe the time has come when the OSCE will remind the Kiev authorities about their responsibility for ending the civil war in the east of the country? The answer to this question, Sebastian Kurtz has not yet given ...