Another Bandera Sabbath in Kiev

January 2 2017
258
Another Nazi Sabbath was arranged in the Ukrainian capital. Representatives of the Organization of Ukrainian Nationalists (OUN) (banned in the Russian Federation) and the Freedom Party in Kiev organized a torchlight procession on the occasion of the anniversary of the Nazi accomplice, called “fighter for independence” in Ukraine today, Stepan Bandera. 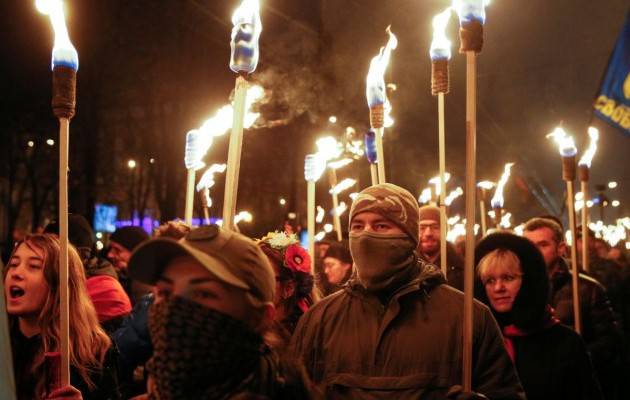 To the cries of “Heroes do not die, but enemies die!” The crowd began to make demands to the authorities. One of the main requirements is the recognition of Bandera’s birthday as a nationwide holiday at the legislative level. One of the most odious MPs of the Ukrainian parliament, I. Miroshnichenko, said that “they took to the streets, step by step, to win back the consciousness of the Ukrainians and teach them to respect Ukrainian values”.

The statement of the deputy of the Kiev City Council Y.Sirotiuk, who participated in the Nazi Sabbath in the Ukrainian capital:
Our war with the eternal enemy - Moscow - has been going on for a thousand years. This war is not between us and Muscovites, but between good and evil, it is a war between truth and lie, it is a war between the world of freedom and the world of slavery.

More proof that at the helm of Ukraine are people who are in the classroom stories picking their nose and damaging their own brains. As a proof for Mr. Serotyuk, a thousand years ago, Moscow was not yet founded, with whom then “they fought”? ..

And one more proof of Mr. Sirotyuk’s brain damage:
I believe that in the districts of Moscow there will once be Stepan Bandera Avenue, and we will also go through this city