The first assault groups arose in 1915, but only after the formation of assault battalions at the army level did the full-fledged assault units appear in the German army. It is the assault battalion (the average number is up to 1,4 thousand people), equipped with machine guns (12 - 25 units), flamethrowers (4 - 8 flamethrowers), trench artillery (4 - 6 76 or 37-mm guns), mortars (8 mortars in mortar company) and became in the hands of the Kaiser command an operational breakthrough tool, comparable in effectiveness to artillery and tanks. And the point is not only that the assault battalion was superior to the infantry regiment in terms of heavy weapons, but also that it became the ancestor of the new - assault - infantry tactics. This was fully confirmed by the operations of the second half of the First World War.

In April 1917, the German army had seventeen assault battalions (the eighteenth appears in August).
Eleven (1-7 and 14-17) operated in French and six (8-13) on the Russian fronts [About the assault units of the German and Austro-Hungarian armies. According to September 1917. Comp. Taneyev, b. city ​​b. m., The current army, the printing house of the headquarters of the 9-th army. C. 2]. 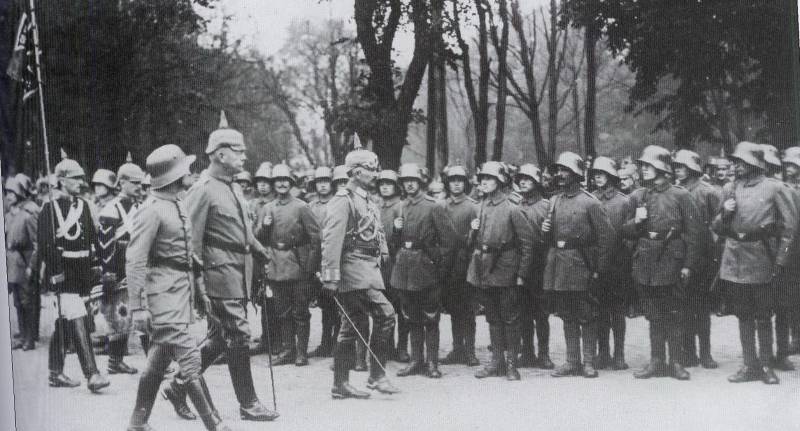 Il 1. Kaiser Wilhelm II and the commander of the German 8 Army, General of the Infantry O. von Gutier, inspect the assault unit. 1917

Attached to the combined armies, battalions were to be used as part of an army operation. But from their composition, assault groups were distinguished and distributed between infantry regiments and battalions. A similar situation occurred with parts of the 10 th assault battalion, which had a chance to distinguish themselves during the Riga and Moonsund operations of the 1917 year.

The progress and outcome of the Riga operation 19 - 24 in August 1917 was greatly influenced by the morale of the Russian troops, who were rapidly losing their fighting efficiency during the revolutionary 1917 year.

The decisive role in the Riga operation was played by artillery operating according to the Bruhmüller technique. Chemical artillery bombardment neutralized Russian artillery (20650 shells marking the blue and green cross were fired in two hours), which greatly facilitated the task of the infantry. Actively applied aviation - for example, on August 18, about 40 German bombers and fighters attacked islands in the Gulf of Riga.

Three shock divisions were to cross the Dvina. And on the edge of the offensive, attack aircraft were moving - on pontoons and wooden boats they crossed the river, taking a bridgehead, and then the sappers built three pontoon bridges, along which infantry moved forward. 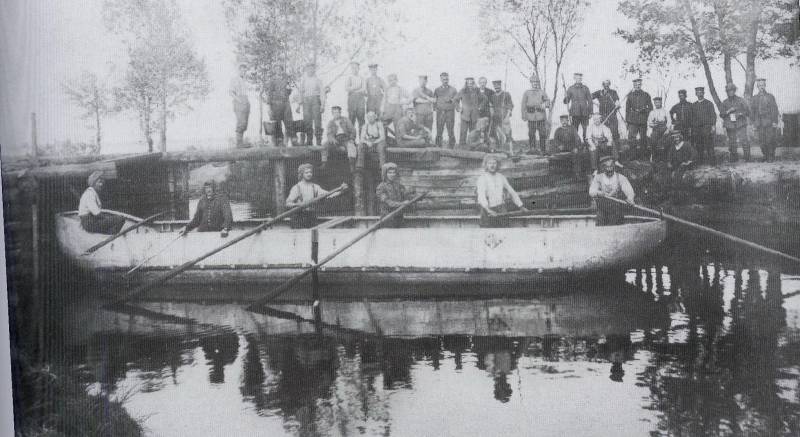 Il 2. Preparing for the crossing of the Dvina. 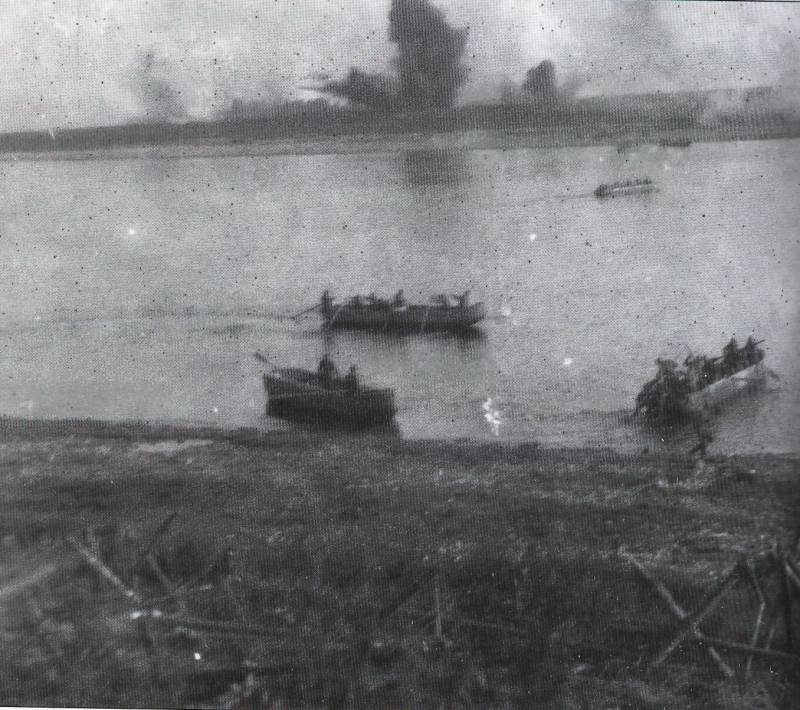 In these battles, a tactic was born called Guterowski (after the commander of the 8 Army O. von Gutier).

The advantages of the new assault tactics over the usual linear were undoubted. The Russian troops, who used the tactics of positional hostilities, sought at all costs to maintain a solid front line, fearing bare flank. They tried not to lose elbow contact with their neighbors. If such a connection was broken, the troops were worried about the flanks, rumors appeared that a part was bypassed, cut off by the enemy. Conversely, the German attack aircraft used group tactics without fear for their flanks and using all available forces to strike, which provided them with an advantage in any area of ​​the offensive.

The attack aircraft also showed themselves in the battles for the Yakobshtadsky bridgehead. If Russian troops had solid positions, equality of the operating forces of the opponents (although Russian troops were already at the extreme stage of decomposition), success in the most important position point (and this led to the withdrawal of Russian units) was achieved by attack aircraft.

Breaking through the positions of the 736 Infantry Regiment, the assault groups quickly began to penetrate the depths of the Russian defense. Fighters armed with automatic assault tactics weaponsconfidently moving forward. Encountering organized resistance, they retreated, and tried to bypass the defenders from the flank or from the rear. Bravely penetrating into the gaps between the Russian units, striking them in the flanks and rear, the attack aircraft forced them to retreat. Moreover, their efforts were primarily directed at the positions of artillery batteries - and the artillery of the 184 Infantry Division was captured, and the calculations and horses were destroyed by machine-gun and rifle fire.

Thus, the Germans won the Riga operation, breaking the coherence of the Northern Front. In fact, they deprived the Russians of the possibility of conducting serious offensive operations in the future towards Shavli-Kovno-Vilna.

And an important role in achieving the tactical and operational success of the German troops was played by the actions of the 10 th assault battalion fighters.

Moonsund operation 29. 09. - 07. 10. 1917 was the last combat operation of the Russian army and navy during the First World War, and for Germany it was Operation Albion.

It was during the Moonsund operation that an extremely rare picture was observed for the First World War - the confrontation of the elite attack units of the opposing sides that had entered into direct combat contact. On the Russian side, this is the Revel shock battalion (the Revel naval death battalion) under the command of P.O. Shishko, captain of the 2 rank, and from the German part, the part of the 10 assault battalion under the command of Major Sluiter.

In the Russian Army in the 1917, each infantry division was supposed to form a shock battalion as part of the 3's rifle companies and the technical team (machine-gun, mortar, bombing, disruptive and telephone department). But due to the current political situation, the new battalions had to tackle both combat and political tasks - the shock units became not only a tool for breakthrough, but also the basis of order and loyalty to military duty (while the bulk of the armed forces gradually lost their combat capability). In the technical-tactical sense, the shock battalions were not a direct analogue to the German assault battalions, but were also the elite of the Russian army 1917 of the year.

On the night of September 30 1917, the 18-I assault company from the German 10-th assault battalion landed in the bay of Tagalakht on the island of Esel. 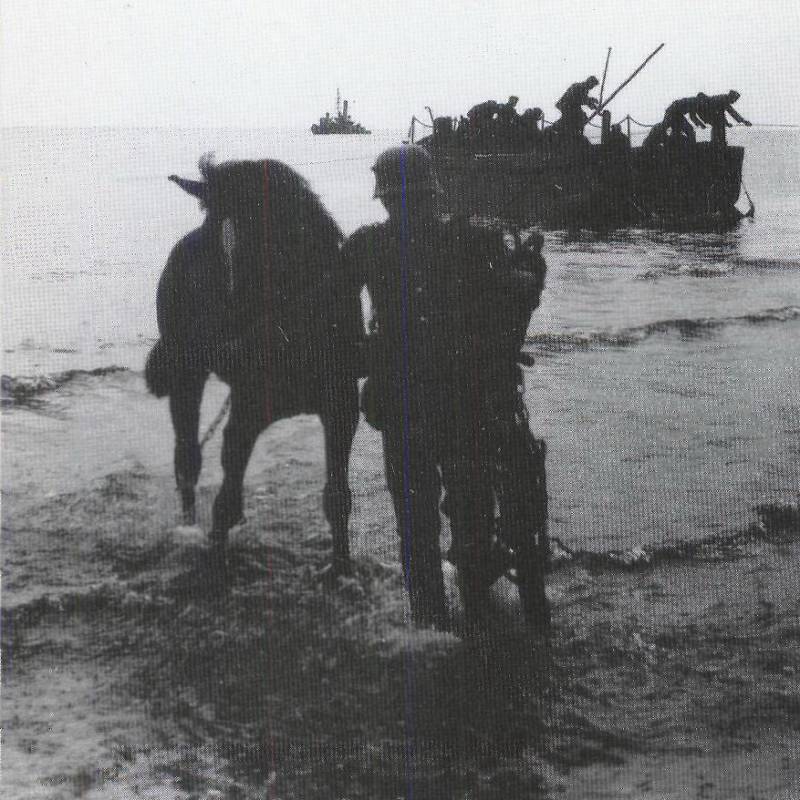 Il.4 .; 5. The landing of attack aircraft in the bay Tagalaht.

The company moved to the townships of Ninast and Hundsort, taking possession of two (120-mm and 152-mm) artillery batteries - the calculations of these batteries were captured.

The assault company set up a battle for bridgeheading (bridgehead) at the dam between the islands of Moon and Ösel. In this battle, the Russian fighters of the Revel strike battalion met with German attack aircraft.

The fighters of the Revelsky shock battalion (numbering up to 600 people) from October 1 defended the dam, having arrived at the position already during the battles from Revel. Moreover, the dam's defense rested only on the percussion forces, since the infantry, at the very first shots of the enemy, abandoned their positions [Report on the actions of the Naval Forces of the Gulf of Riga September 29 - October 7, 1917 Marine historical commission. Federal Archival Service of Russia RGAVMF. - SPb., 1998. S. 31].

The fight showed equal fighting qualities of opponents.
Thus, the attack of the German 18 th assault company during the battle of October 1 did not have success: under the machine-gun fire of strikers, it approached only 600 meters and lay down. The attackers failed to advance - and the battle for the dam is considered the most intense episode of the Moonzund operation for the German landing force.

Revel shock battalion even counterattacked, and under heavy artillery fire of the Germans.

The German source especially notes the persistence of the battle and the fact that the Russian fighters sought to break through the dam at any cost. They were getting closer, advancing from Maughan Island - striking the rear of Captain von Winterfeld's squad, which included a machine gun platoon of the 18 th assault company and the 2 th scooter battalion. With the help of hand grenades, the Germans managed to beat off the drummers - but only from very close distances. When the Germans began to experience a shortage of cartridges, Captain Winterfeld was forced to make a difficult decision for the Germans to leave the bridgehead. 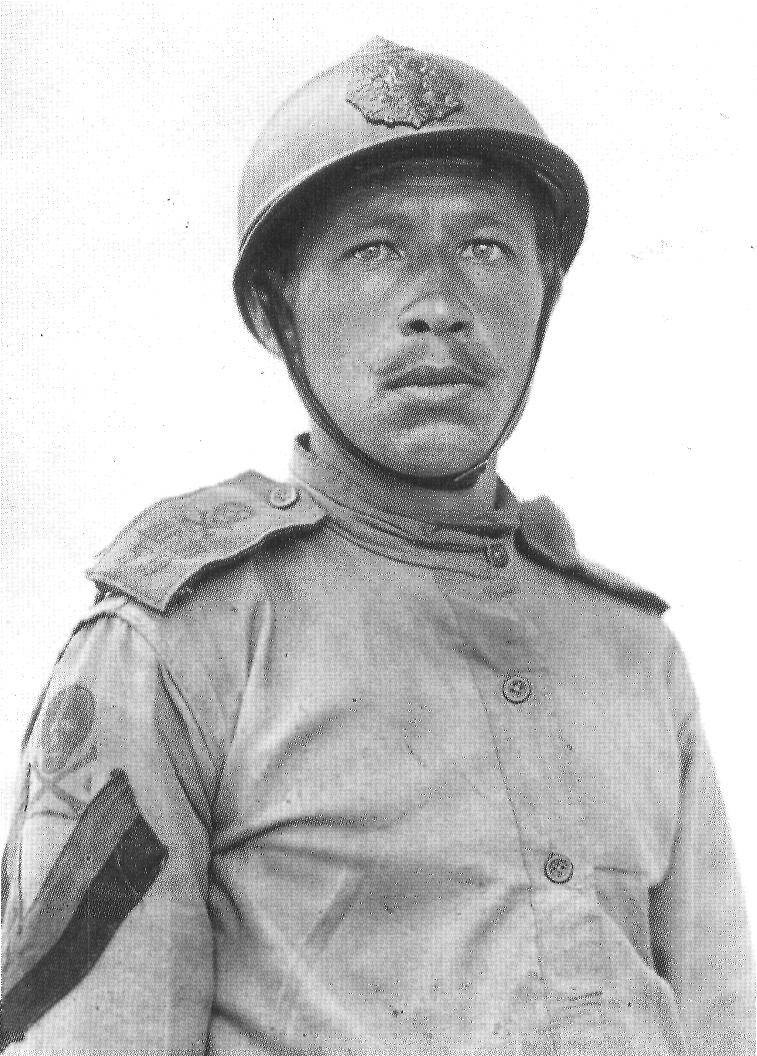 Fighters of the Revel shock battalion successfully crossed the dam and captured the Eselsky bridgehead. But later they were forced to retreat again to Mawn, since they were not supported by the infantry, and they were bombarded from the sea by German destroyers.

German 18-I assault company took part in the final attack on the island of Muon.

At night, on October 5, she began to cross over to the island with the support of the battalion of the 138 Infantry Regiment. The machine-gun platoon and the platoon of the assault company began the crossing, but, being under machine-gun fire, lay down before the dam. Only after the Russians left, the assault company captured the bridge position between Linuet and Nauze (2 guns, a machine gun and a burned armored car became its trophies).

At the final stage of the Moonzund operation, the Revel shock battalion led a stubborn defensive battle - in the absence of communication with the higher command. Since the main burden of these battles fell on him, he suffered heavy losses.

To rescue the strike battalion, an evacuation operation was carried out. Moreover, the battalion stubbornly kept at the Moona pier, surrounded by rifle chains of the enemy. Combat P. O. Shishko, deciding to leave the island last, refused to take a boat. As a result, he was wounded and captured. It was possible to evacuate 20 officers and before 400 drummers.

Elite enemy battalions played a key role during the land phase of the Morund operation. The German attack aircraft were at the forefront of the attack, and the Russian drummers became the backbone of the defense - when the island garrison, consisting of secondary infantry units, mostly surrendered to the Germans, only the companies of the shock battalion were held.