If he is not a black donkey, he will not become a mule anyway. Sleep, "Volcano" ...

December 30 2016
36
An interesting thing is life. Especially for those who are curious. So many paradoxes. So many new ideas from the "well forgotten old." You do not want, but you will have to remember. And laugh. There is simply no other way to respond to statements that are voiced. 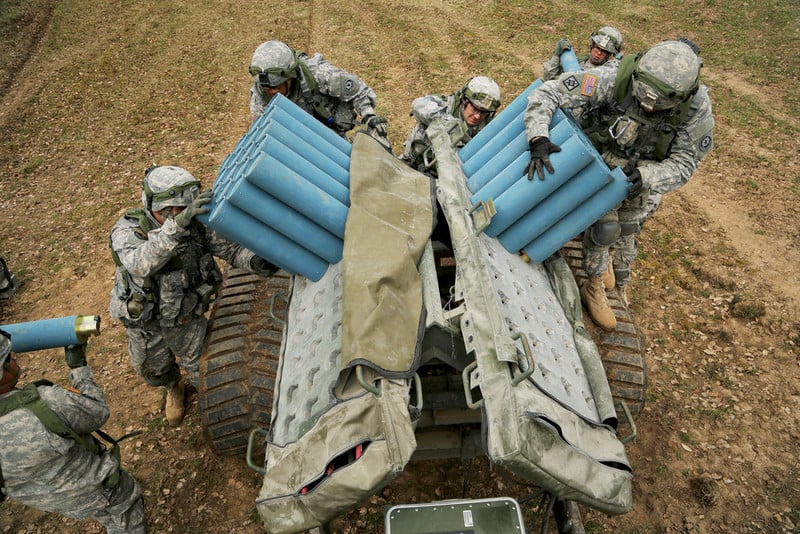 Yesterday a lot of media outlets, including us, reported on the Pentagon’s statement about the revival of the Vulcan system. The presenter in the messages was a beautiful phrase from a representative of the US Department of Defense: "The Commander's Last Hope" ... Agree, beautifully said. And how much sense ... The commander has hope. In case there is no hope anymore.

Honestly, I do not understand why most of the leading media are so alarmed? Why in Europe and in our country have already started talking about the NATO mining of their territories with the help of Vulkan? Perhaps this was the reason for writing this article.

The system that is being revived today by the United States is nothing outstanding. It is from the point of view of the soldier. At the household level, which most media broadcast, mining systems are designed precisely to stop or halt the enemy’s advance. But, given the specifics of our publication, I have to expand the special knowledge of readers.

The classic work of a minefield is a cover for positions held as described above. And not only a cover, but also a forced offensive on other roads under the firing means of the defenders. Back in World War II, another method of mine defense was used. Remember the "rail war". This is nothing but a strategy of laying mines on enemy routes in his rear. Mines work like soldiers against second-tier troops. The reserves of the enemy "get stuck" and do not have time to replenish advanced units.

But what about the mines in the attack? Minefields that help advance? This happens?

Competent commanders will answer quite clearly. Not only it happens, but it is also the way of conducting a battle on the offensive. See messages from the Donbass. What is happening today under Debaltseve. Offensive. Separation from the main forces for a short distance. The exit of the defenders to the flank and the destruction of the attackers. Further - a withdrawal with losses and inventing a version for the press about what huge forces turned out to be on the defenders.

And then the situation changes radically. Now the former defenders are attacking. And those who attack are already suffering huge losses. And mines help to cause the most damage. Yes, and crawling through a minefield, even if the mines lie randomly, it turns out much slower than running at a gallop.

In a message from Washington, it was also mentioned that the Volcano today needs to be modernized. Blah blah blah about international conventions and more. Antipersonnel mines cannot be set. Not humanely. "Volcano" only against tanks! He laughed.

The system "Volcano" was originally universal. For the installation of anti-tank and anti-vehicle mines in NATO, there are several quite decent European-made systems. That's why he laughed at the Pentagon’s statement. It is doubtful that American "goons" will spend dollars to worsen their own weapons.

"Volcano" is intended for the "rapid deployment forces" of the United States and NATO. It is mounted on the 5-ton M817 vehicle or Black Hawk helicopter. In the 4 ammunition module for 40 mine cassettes disposable. Each cassette contains 5 anti-tank mines and one anti-personnel mines. One gas station of "Volcano" allows you to mine a plot of 1000 terrain on 50 meters in half an hour.

So today, suddenly caused such a passion for the "Volcano"? Oddly enough, poor learning ability of the US military. Well, and experience of conducting operations by other armies in Ukraine and in Syria.

I have already mentioned Debaltseve. At the very beginning of the operation, we did an analysis on this issue. It was evident even from the few truthful reports that the commanders of the Armed Forces of Ukraine "are a little morons." Among other things, I called the developers of the offensive plan. What caused a lot of critical comments from readers. But when a unit is sent for slaughter only with the purpose of identifying enemy firing points, it is not from a great mind. For this today there are many other ways.

But back to the Americans. After the failure of the offensive, "debriefing" always follows. And, as I think, it was there that they remembered the forgotten minelayers. Honestly, if they were at the APU, the success of the operation would have been predetermined. Naturally, if the Republicans would not have "another scrap." But more about that below.

In the same way, the “successful operation in Mosul” affected the brains of the generals of the “most powerful army in the world”. When a bunch of soldiers from different countries and groups successfully dope from terrorists. When even the use of heavy artifacts and aviation no results. It was then that mines could be used against the advancing terrorists. But no mines ...

In conclusion, you need to tell about the "fire extinguishers", which make these "Volcanoes" almost useless. Any system of mining, as, indeed, any weapon system in general, is most effective when the enemy does not possess any countermeasure system. Listen to PVOshnikov. Most, if, of course, did not take part in real hostilities, they will tell you that the aircraft will never fly through precisely their position. And then talk to the pilots. The result will be completely opposite. Let the sparrows of their missiles knocked.

In modern armies there are systems that counteract mines. What we see in the films about the Great Patriotic War, a sapper with a mine detector or probe, is not used in the offensive today. Too long. The army simply cannot afford to linger for hours. Sappers work afterwards. Clean the fields. And in the offensive technique works.

The Snake Gorynych is most known in our country. And easier, install the UR-77. Designed for making passes in an explosive way. It has an extended charge clearance - flexible, double-stranded. Charge length 93 meter and weight 2400 kg. The unit has a range of charging charges clearance 200-500 meters. And guarantees the creation of the passage length 90 and width 6 meters. Simply put, "Vulkan" will delay the onset of a tank unit on 3-5 minutes maximum. Until “Gorynych” breathes ...

And there is still a portable installation UR-83P. There is an UR-07Р based on the BMP-3. There are even coastal demining systems. This is what I am writing for the Intelligence Agency of Ukraine. All attempts to mine the coastal strip in Mariupol are nothing more than a beautiful fairy tale for the average man. For demining do not even need to stop the landing. All anti-landing mine blast barriers at depths from 5 meters to the water's edge will be destroyed.

So, the Pentagon is trying to solve their problems with the help of a European man in the street. The fear of the Balts and the Poles is so great that today they are ready to believe in any nonsense. As the fear of Ukrainians. About the "weapon of retribution" we have already heard. Doomsday Guns too. Now here is the "last hope of the commander." Are there many scary stories?

When a person is constantly frightened, the reverse reflex is triggered. A person does not care about death. He seems to be resigned to death itself. Maybe this is exactly what overseas strategists want? Intimidate and make believe that the next war in Europe is inevitable? And if we add to this the increased propaganda among young people about the possibility of a serious army confronting hunters and a couple of NATO battalions, then ...

I do not see any other explanation for the hype about the statement by the Americans. Well, they do not consider our commanders as a flock of sheep? The fighting in Syria and Iraq showed "who is who ..." All the listed mining and demining systems have been used for a long time and do not represent any military secrets for the military. The secret, which is why the secret that no one wants to disclose it.

We are once again trying to take "on the weak." How many times should Putin answer the same question about an arms race? There will be no race. There will be a weapon that neutralizes the enemy effectively and "according to new principles of influence." We can talk. But we can cut into the face of the brazen face too impudent insolent. Every cricket know your hearth.

Whatever you say, but wise peoples once united in the USSR. Azeris gave the title of the article. Russian - the end. The wisdom of the people. Nothing personal.