About towers on pedestals, and not only ...

January 8 2017
43
Life is a funny thing. Recently, at the request of his wife, he climbed into the sofa, where a heap of papers was gathering dust, in order to throw away all this waste paper and found there a number of old "tank-workshop" materials and ... decided to "drive" them into the Antiplagiat system. I drove it and saw that they had a high level of novelty. That is, something was planned for publication, something was published, but did not get on the Web, in a word, I did a little bit of money and it turned out to be good material for VO on the topic of Czech tanks... And then he looked there again, and there was a "continuation of the banquet" about the towers of Czech and not only Czech tanks, which fell on the pedestals of various fortified lines. 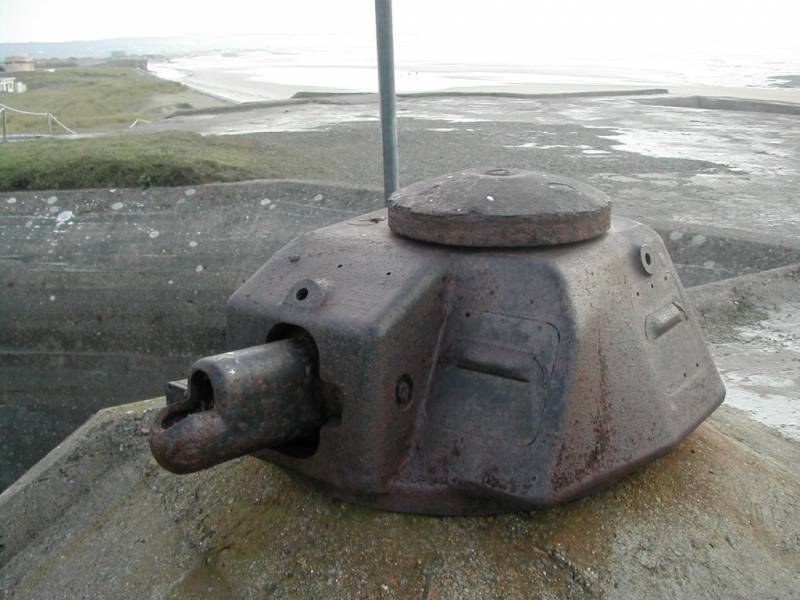 The most frequently encountered tower from a tank on a concrete base is, of course, the tower from the Renault tank R-35.

And it was so that when my magazine “Tankomaster” began to come out and spread, many considered it almost a miracle — during Soviet times, our people did not indulge in such information. In the special security of the library to them. IN AND. Lenin kept even the drawings of the T-27 wedge. The fear was - “as if something did not work out”, and it was so strong that the very first issue of the magazine was generally written in manuscript! Nobody wanted me to type it for any money, and my friend artist I. Zeynalov had to write all the text to him by hand! Well, and printed it in some scientific research institute on a hectograph (not one printing house undertook!), As if the Bolshevik leaflets in the underground. 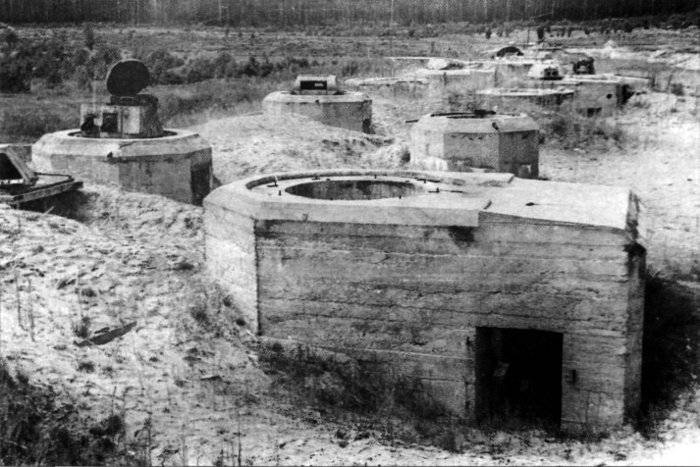 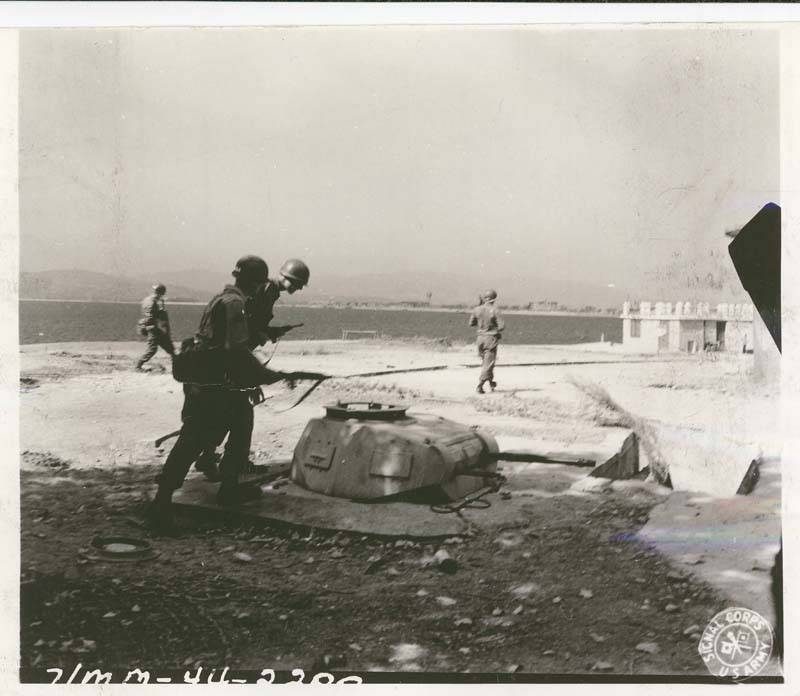 A famous shot in which American soldiers walk past the turret of tank T-II. 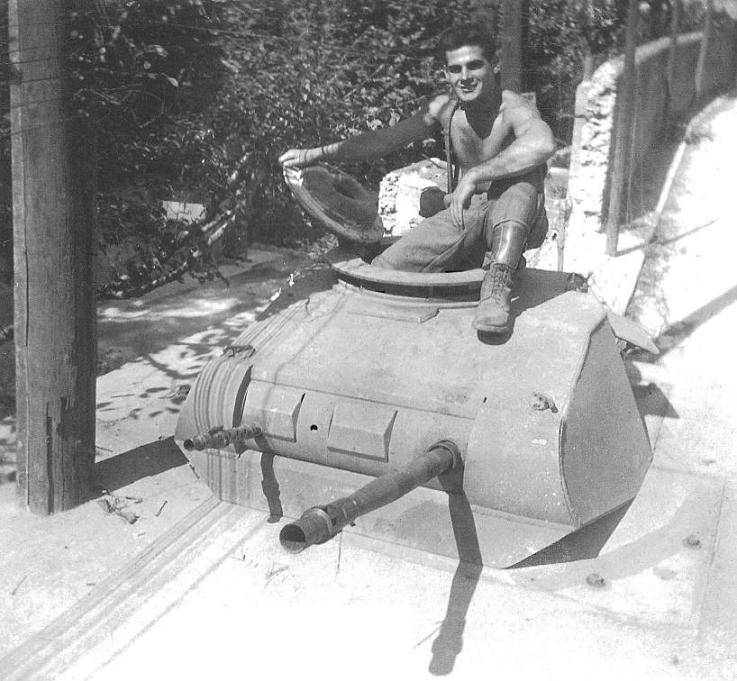 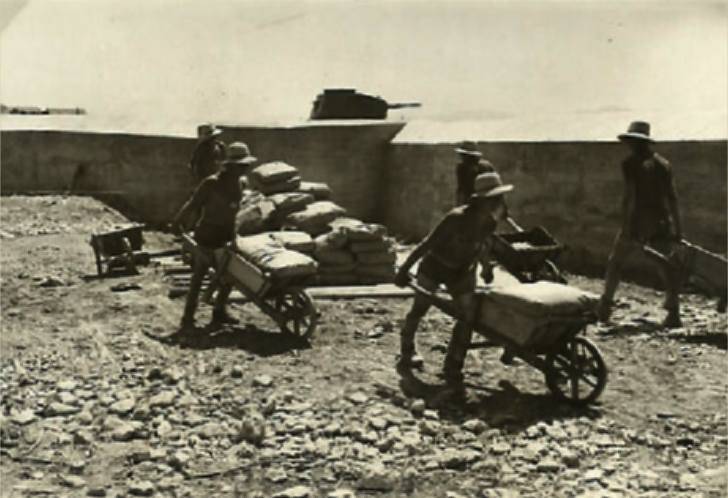 Tower T-II in the area of ​​Marseille.

But over time, the journal got better and better, and then it began to be published in Moscow as an addendum to Technique Youth. And here it began: both model companies and individual citizens “from there” began to overcome me with requests for help (and the most often original ones, for example, send good drawings of the Russian 1941 hut for the diorama with the T-III tank), and proposals for cooperation . One came from the United States from St. Louis (that's where my TAM got!), Where the author worked as the chief biologist at the local zoo and part-time owned the company "Turk Turret", which was engaged in collecting information about the turret tanks used in the war stationary . The biologist wanted to get two things from me: first, he needed ... a bone from a walrus penis (!). It turns out that walruses have bone there and this is a rarity. And secondly - the information on the photo, where there were towers of German tanks, found here in Russia and in Poland. I never found a bone to him, because there were no “tank makers” among the Chukchi, but with the photo it burned out. Moreover, in one of the five firms, and in Penza in 90, there were as many as five firms producing models of tanks and podiums for dioramas, they decided to release a podium for a diorama with a piece of German fortified line from one of these photos. It should have a shaft, a concrete bunker built into it under the tower of the T-II tank, pillars, racks, a pair of “hedgehogs”, there were several craters on the ground, and you should have bought the soldier figures yourself. I remember that there was also “grass” there, but we made a few such podiums - they were expensive and did not use demand. 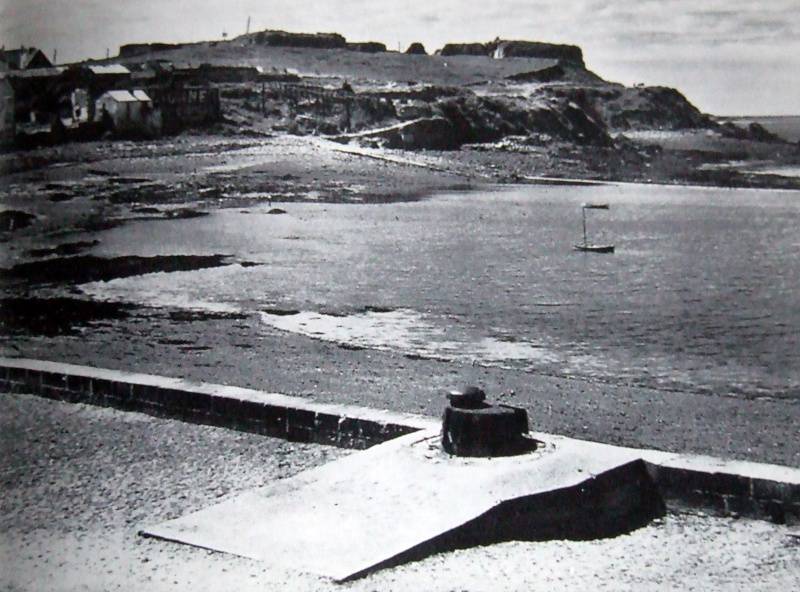 But ... about the towers of tanks installed permanently, I, besides TAM, also wrote in “Technician-Youth”, and “Technique and armament”, so that communication with this American was not in vain. What turned out in the end? But what: the Germans during the Second World War showed themselves to be highly practical, economical and thrifty people, so they managed to use the equipment and enemies and allies very rationally. 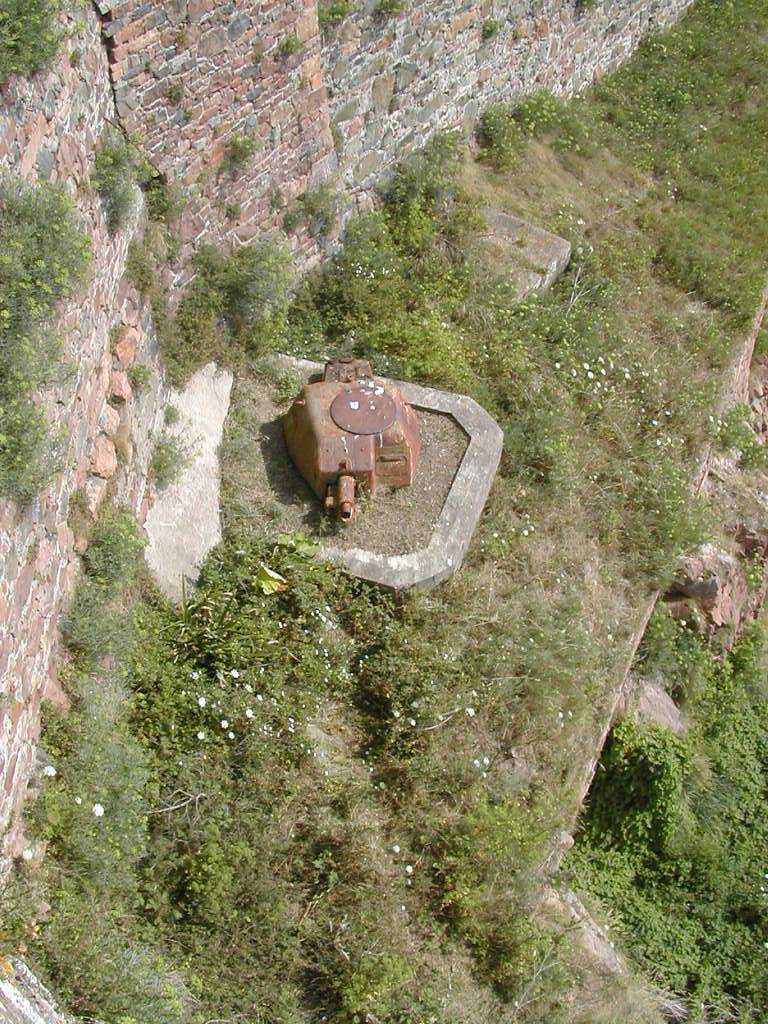 For example, judging by the photos, even our Soviet BT-7 towers were used as stationary fire installations, from which the upper armor plate was cut off and installed on a concrete base dug into the ground. By 1942, the Germans had so many captured tanks that standard designs were developed for the installation of Soviet tanks such as the T-34 and KV, and there were two options - concrete and timbered! 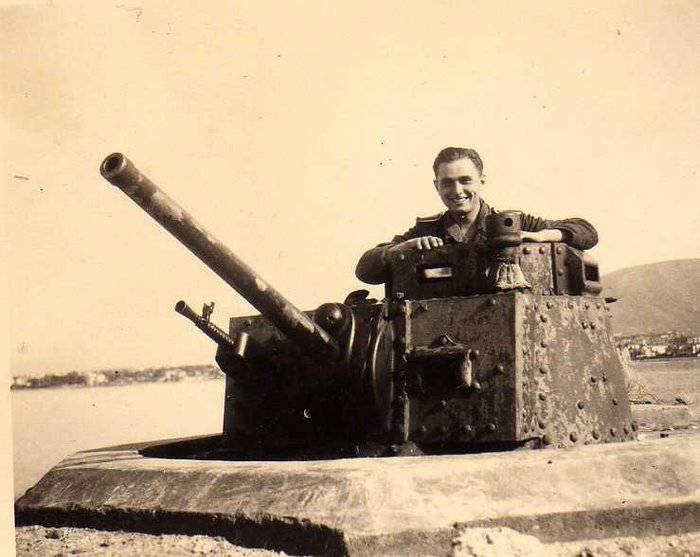 At the same time, concrete foundation projects were developed for the German tanks themselves, which were already decommissioned: TI, T-II, 38 (t). Surprisingly, T-II towers often, at least in Poland, were found, re-equipped with 37-mm cannons from T-III tanks. The ammunition was stored in the underground part of such a bunker, so that the narrowness in the tower was not a hindrance to such modernization. They were placed on pedestals and towers from T-III and T-IV themselves, the latter at the end of the war being placed in various places, including at the crossroads of streets. The second largest were the towers of the French tanks "Hotchkiss", "Renault" AMH, which strengthened the coast of France, Holland and Belgium. And in France they were placed in the north, in Brittany, in Normandy, and in the south - in the area of ​​Marseille. 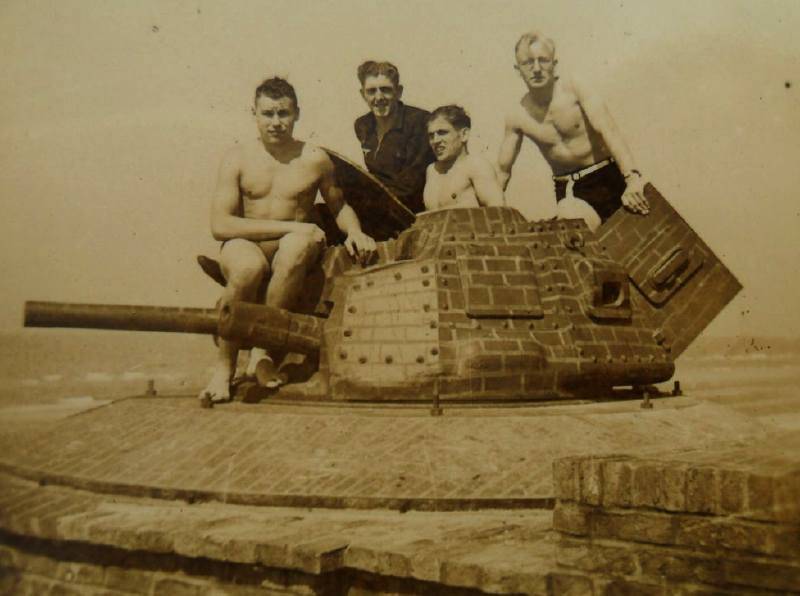 The AMC-35 tower is for some reason painted with “bricks”. Belgium.

The most famous, of course, defensive fortified line of Germany was the "Atlantic Wall". On it, the Germans built both very powerful, with walls of multimeter thickness, DOTs with 128 and 152-mm caliber guns, and "machine gun nests" in the form of ... a concrete pipe without a roof! Sitting in this ... "fortification" was supposed to be a soldier with a MG-34 machine gun and ... everything! I leaned out, put the machine gun and shoot! But they are bombing, shooting, dropping to the bottom and sitting, trembling with fear, hoping that the bomb will not fall into such a tiny “hole”. 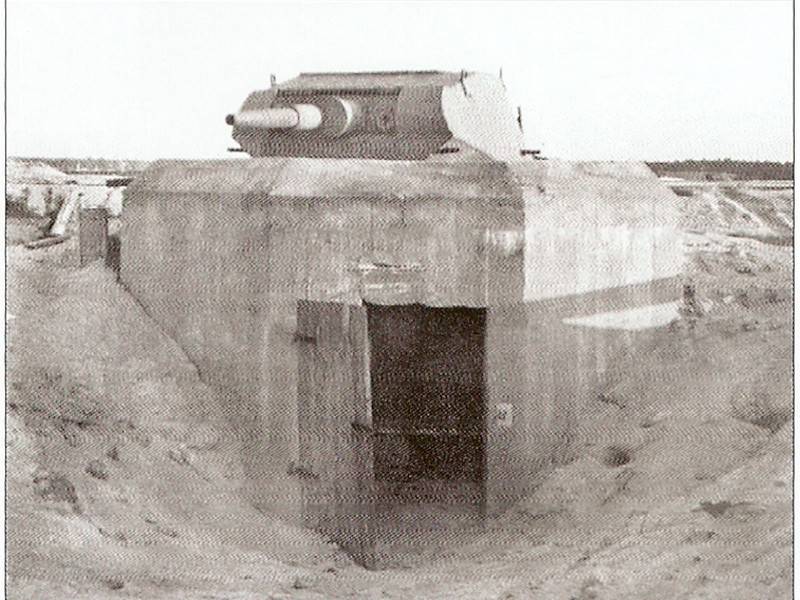 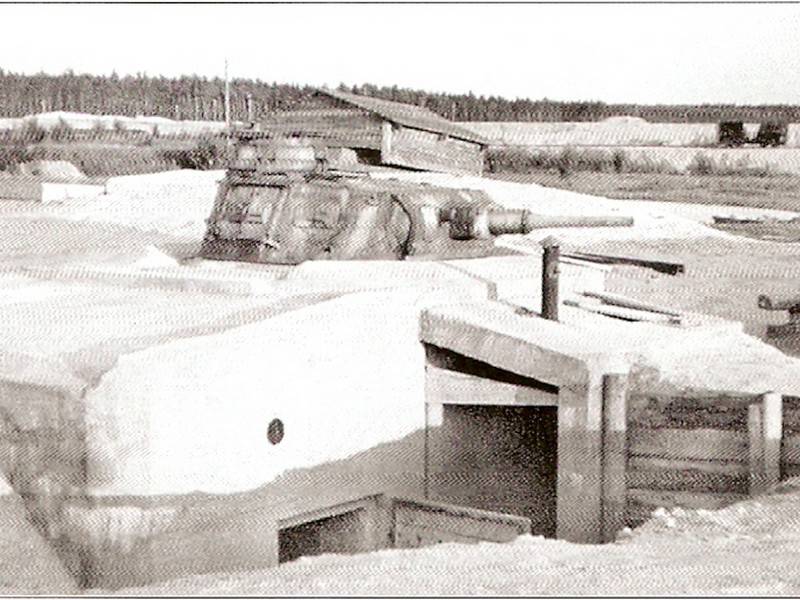 And this is a tower from T-III with an 50-mm gun in Russian snow.

But, in addition, the Germans built along the coast a lot of concrete pedestals for two people, on top of which they erected towers from the tanks R-35, H-35 / 39, AMC-35 - in a word, they strengthened the defense with everything they had under their arms! The distance between the towers was chosen so that the guns of the towers (or machine guns, if the guns were not installed) blocked it with fire. Structurally, it was a concrete parallelepiped with a staircase and a door. Moreover, the internal under-turret volume made it quite comfortable for two soldiers to stay there, one of whom was charging, pointing the gun at the target, well, shooting from it, and the second was giving him ammunition from the bottom, that is, the tower was not one person, as in a tank, but essentially - two, which allowed to increase the rate of fire. Twin towers AMC-35 are also very actively used. A base of a slightly different type was developed for them, and there are several photos from different places with the installation of a tower from this tank. But there were very few tanks of this type in the French army, so the main suppliers of tower installations remained the Renault and Hotchxes. 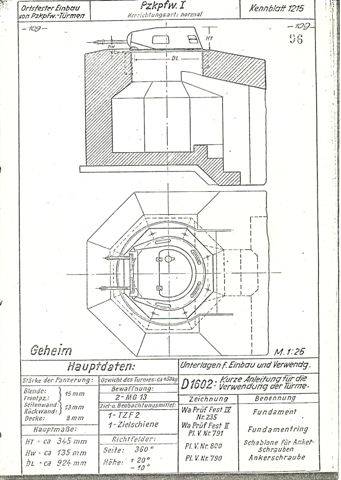 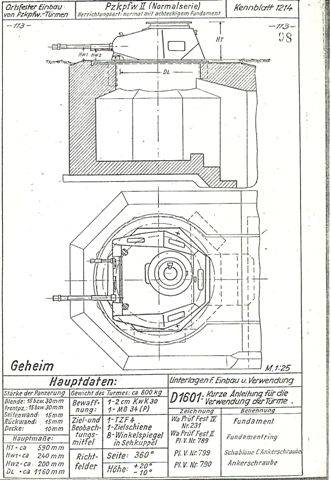 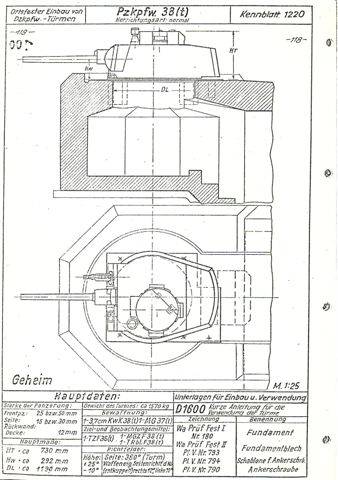 Drawings of concrete bunkers for towers.

The towers of the Czechoslovak tank 38 (t) were also widely used. And where only they were not put: in Italy, and on the border of Germany, and in Czechoslovakia itself. Then, after the cancellation, the towers of Czech tanks produced in Sweden will also be used to strengthen the coastal defenses and will be installed along its eastern coast to counteract the Soviet landing forces. 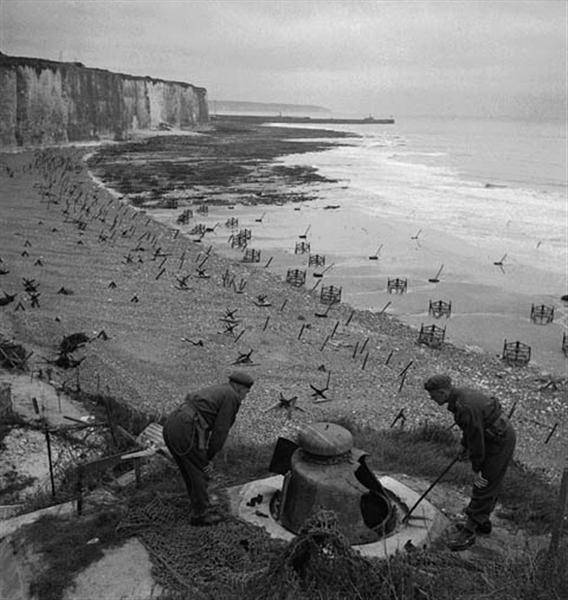 Panorama of the coast in Normandy with Nazi anti-fortifications and a broken tower from the Renault.

As the Soviet and Allied forces approached Germany, the defense problem became sharper and sharper, but the towers of the decommissioned tanks could not solve it. After all, their 37-47-mm guns were powerless against the armor of Soviet and Anglo-American tanks. In North Africa, the Germans used towers and captured tanks. For example, the Tobruk fortress was defended by towers from downed Matilda tanks. 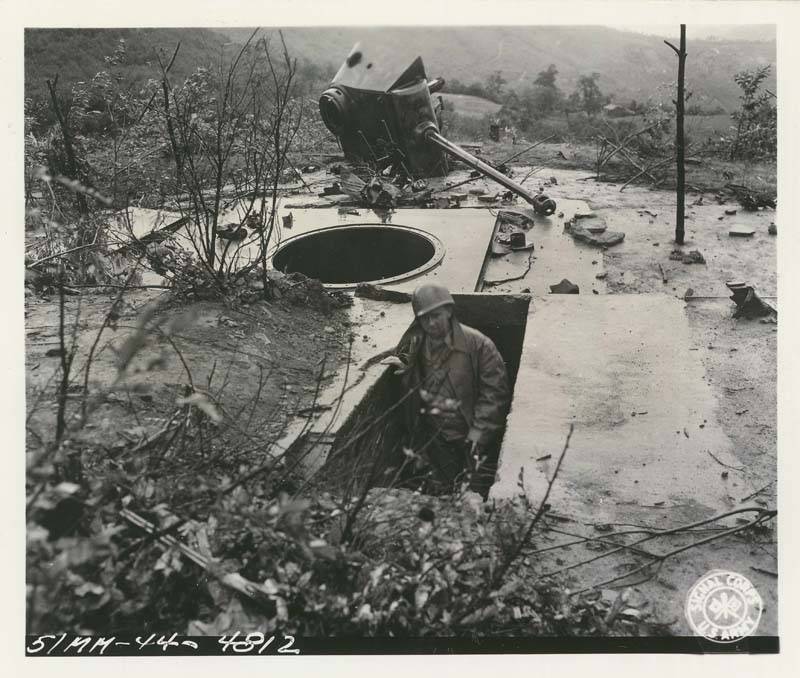 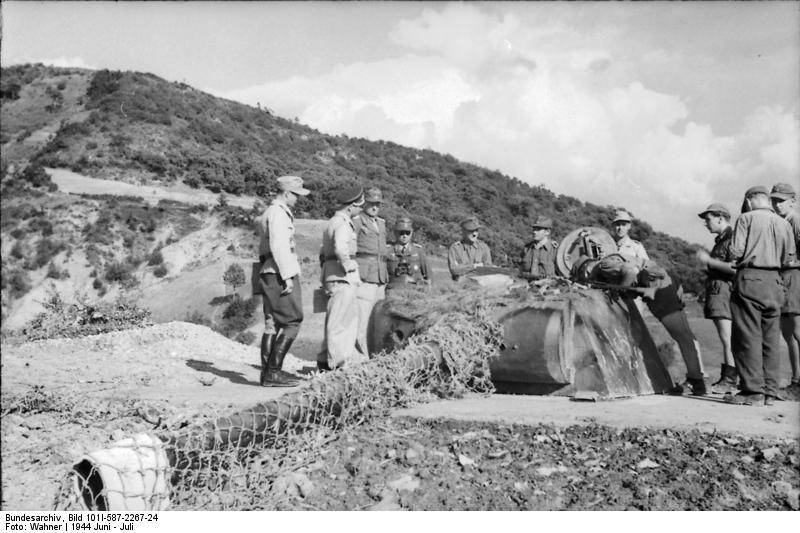 In addition to tanks, the Panther towers were used for installation as long-term firing points (DOT). For this purpose, they were used as regular turrets of Ausf tanks. D and Ausf. A, as well as special towers, which differed reinforced to 56 mm roof and the absence of the commander's turret. 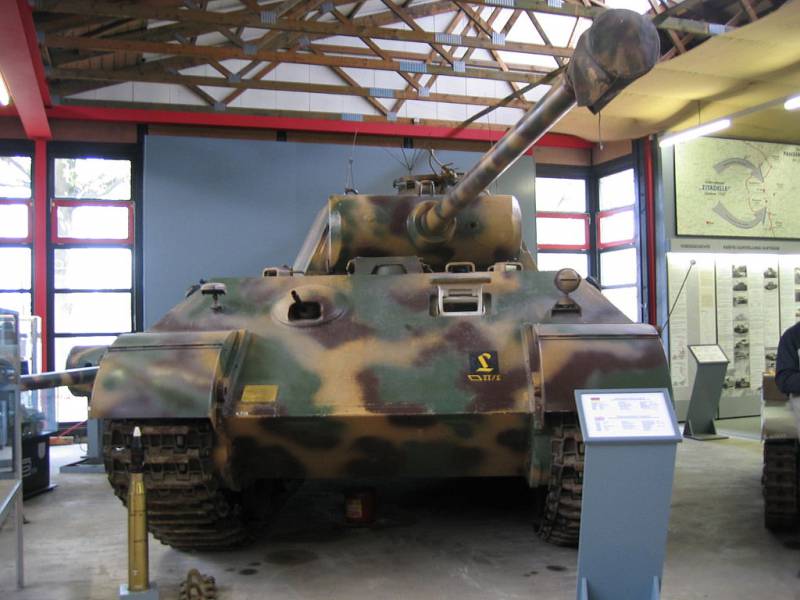 There were two modifications of pillboxes using the Panther turret: Pantherturm I (Stahluntersatz) - the turret of the tank was mounted on a chase mounted on an armored base welded from 80 mm thick armor sheets, with a 100 mm base thickness. The foundation itself consisted of two sections - residential and combat. Upper was fighting, and on it was installed the tower, where was the ammunition. The lower compartment was intended for the rest of the DOT team. It had two exits, the first - through a secret door to the outside, the second - into the transitional section to the fighting compartment. 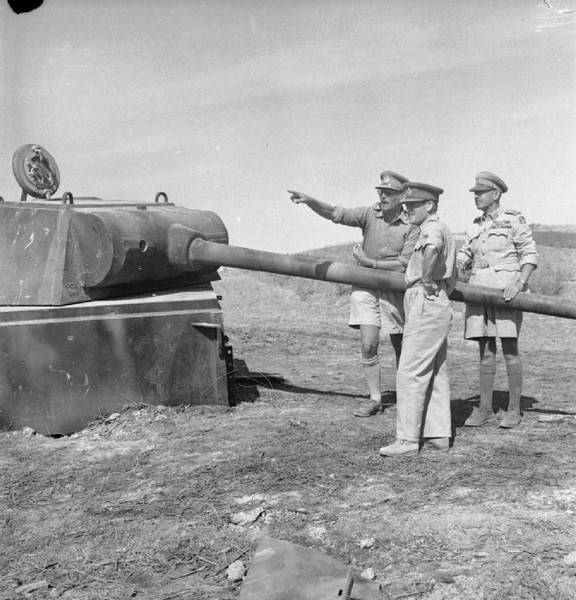 The Pantherturm III (Betonsockel) is a variant of a bunker with a concrete base, which differed from the Pantherturm I only in the increased size of reinforced concrete compartments, but it had no special structural differences.

Also produced simplified modifications of pillboxes with towers only in the upper fighting compartment. This project included the installation of the tower on the armored box with access through the hatch, and with four brackets in the corners for the hooks of the crane. The box with the tower was transported in the back of a truck. At the site, it was removed by a crane and installed in a hole that had been opened in advance, and covered with excavated soil. The tower, therefore, was flush with the ground and became unobtrusive. Very often, the Germans put them at the crossroads of streets or somewhere on the lawn on the side. Due to the fact that the engine of such towers was absent, the tower was turned exclusively by hand, that is, slowly.

The armored box with a turret from the Panther tank, of the Pantherturm I (Stahluntersatz) type.

All types of these firing points were used on the Atlantic Wall, on the Goth Line in Italy, on the Eastern Front, and also on the streets and squares of German cities. Often, damaged Panther tanks buried in the turret were used as pillboxes. 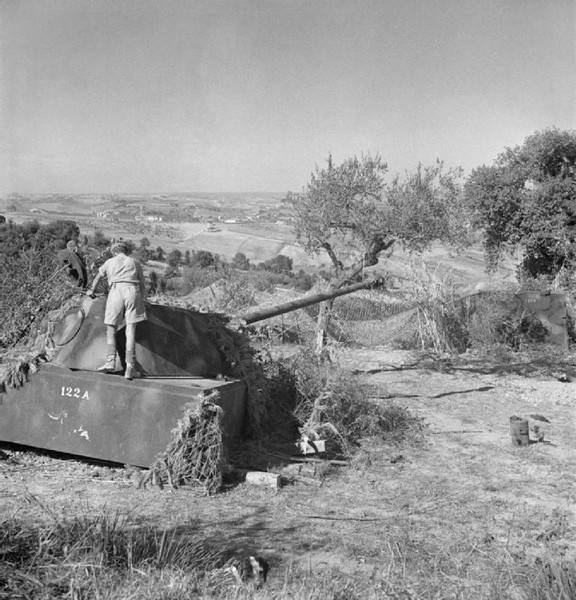 Another armored box with a tower from the "Panther" (simplified version). To make it more even, a log was planted under it.

At the end of March 1945, the 268 Pantherturm-DOTs were produced. But, of course, if there was a tank available with a broken chassis, but the whole tower, it could also be removed and used in such an installation. Inside the concrete casemate even beds were provided for rest. So, theoretically, such a stationary tower could resist long enough. 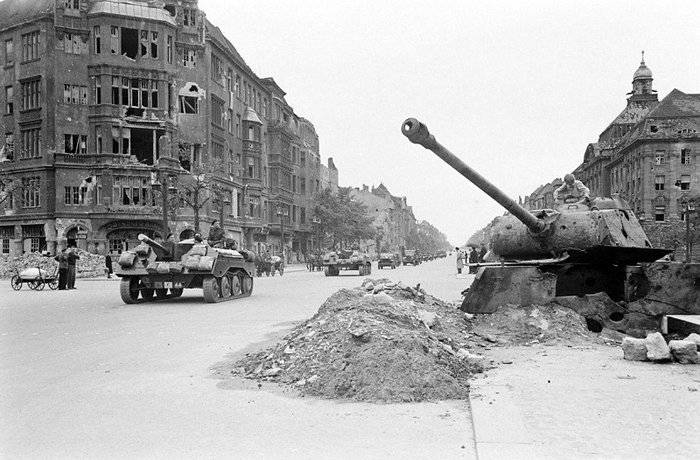 Very interesting photo. On it, the Alecto self-propelled guns based on the Tetrarch airborne tank pass by the Panther without wheels installed at the side of the road.

Sometimes such “boxes with towers” ​​were mounted on railway platforms, which turned the train with them into a kind of armored train.