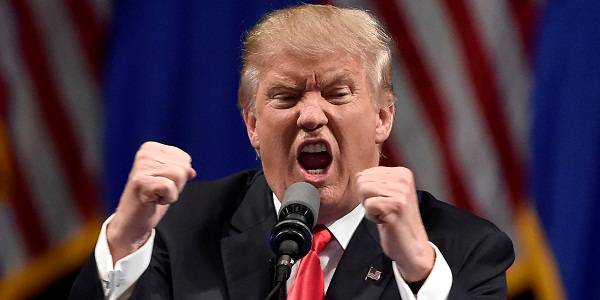 Lawrence MacDonald, who worked as vice president at Lehman Brothers and who is the author of the bestseller about his collapse, last week visited Moscow and spoke at the conference “Global Economy and Financial Markets in an Era of Uncertainty: Scenarios and Forecasts”, in which it explained the reason for the victory of Donald Trump in the US presidential election. Anton Zapolsky from the National Rating Agency wrote down theses of a famous financier - it turned out very informative.

On my first visit to Russia, which came in the period immediately after completion historical Presidential campaign in the United States, I was surprised to find that the mainstream media agenda in my homeland and in Russia is almost no different. Although I expected that the period of official cooling in relations between our countries would prompt the Russian media to be more skeptical news American media, demonstrated in this election campaign its phenomenal engagement and bias. I was sure that healthy skepticism and the ability to evaluate events from afar would help the Russian media to remain more or less objective, but now I understand that I was wrong in general.

Both in New York and here in Moscow, I saw strikingly similar cliches and media stories that showed the public the basic interpretations of the "sensational" results of the presidential campaign and the reasons for the victory of Donald Trump’s election. It seems to me that it's time to move on and show a slightly different picture of the events that took place, based on more than eloquent facts.

VICTORY TRAMP IS NOT A SENSATION

Over the past one and a half years since Donald Trump was nominated for the presidency in 2015, his path exactly repeated the typical path of the leader in Mahatma Gandhi: "You are not noticed first - then they laugh at you - then they fight - then you win." Of course, the attitude towards Trump as the most incredible winner of the presidential election played into his hands, but did not become the main reason. Let's look at the statistics 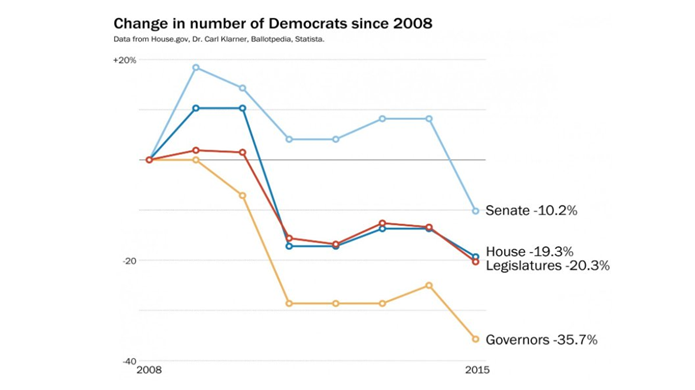 Since 2010, i.e. already in the second year of the first presidency of Barack Obama, the Democrats began to rapidly lose the support of American voters and, accordingly, began to lose places at all levels of government: from governors to senators. Over the past 7 years, the Democratic Party has lost 10% of the seats in the Senate, about 20% in the Congress and 35% of the posts of governors. This led to the fact that

But this is rather protest support, that is, the result of discontent with the democrats. Remembering this statistic, the fact that in the 2010 year, despite such catastrophic losses in the Senate and Congress, Obama was able to run for a second term, does not speak about Obama’s popularity, but about the extreme shortage of leaders in the Republican party. The two consecutive presidential terms of Barack Obama could mislead outside observers about his popularity with American citizens, but this is simply the result of the phenomenal deficit of real leaders among Republicans, who were brilliantly used by Donald Trump. And this is nothing sensational. Sensational, rather, the victory of Barack Obama in 2010, but more on that below.

Many experts on both sides of the ocean are now actively discussing the so-called fake news spreading about Hillary Clinton during the pre-election race by Trump's headquarters on social networks that allegedly influenced the decision of ordinary Americans who voted for Trump to succumb to propaganda. But here it is worth looking more widely at this problem. First, the fake news spread from both headquarters: Donald Trump was massively distributed messages, and he was charged with crimes of a sexual nature. Well, and secondly, many of the news, which are considered fake, turned out to be quite real.

It is enough to mention the fact that before these elections the Clinton Foundation received about $ 120 million of financial support from Saudi Arabia, and in total from all the monarchies of the Persian Gulf, the foundation received more than $ 200 million for the presidential election campaign. 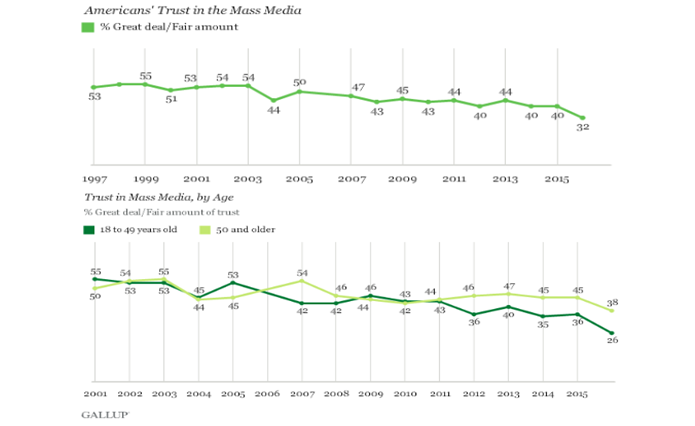 And the most curious thing: in the eyes of many American citizens, the majority of traditional media reports are more fake news than news from the Internet. According to a Gallup Media study, since 1997, American confidence in the media has steadily declined and reached its lowest point in the entire history of observations: in 2016, only 33% of Americans trusted media reports at 53% in 1997.

Even more telling is the fact that young Americans trust the media much less than the older generation - 26% versus 38%. Therefore, the problem is not that the Americans "bought" on fake news from social networks, but that they are looking for information on the Internet, because they are completely disappointed in the official media. But for journalists this fact is extremely unpleasant and they try not to advertise it.

And here social media, fake news and "Russian hackers" when it comes to the fact that Trump won in the traditionally democratic Michigan, Pennsylvania and Wisconsin, where the Republicans have not won since Reagan !?

Many in Russia, when assessing geography and social strata, are guided only by states, but in the US there is also a division into counties (counties), and here we see Trump's overwhelming superiority: he won 3140 (!) Counties, and Clinton only in 58, Trump won in 30 states from 50 (Bloomberg, Reuters, RCP Data). This is such a convincing victory in all respects that it’s simply unthinkable to write it off entirely on the influence of social networks, especially since Trump’s main electorate is older people, and social networks have influenced them to a much lesser extent than various experts. "

Let's immediately forget all the major media stories that are telling you from TV screens. It is much more important to talk about the most realistic and important reasons that a simple American citizen - Joe Lunchpail - turned away from establishment candidates from both Democrats and Republicans, turned away from mainstream media, went against the opinion of the so-called “public” and Hollywood pop. stars and voted for the scandalous scandalous billionaire. I will try to be brief.

1. According to a McKinsey study, more than 70% of Americans said that their income has declined over the past 10 years (McKinsey);

4. The number of permanent jobs in the United States grew from 2007, to 2,1 million, while the US population grew by 29,4 million in the same period (BLS data);

5. The US Steel Belt, consisting of the states in which the largest steel and automobile factories were concentrated (Illinois, Pennsylvania, Indiana, Ohio) is now called Rust Belt, where unemployment is highest in the country , crime, mortality (Bloomberg)

6. Youth unemployment in the 18-24 age group has been at its highest levels over the past 50 years. The number of working Americans in this age group does not exceed 45% (Bloomberg);

9. Since the 2000 of the year, every sixth workplace has disappeared from industrial production - these are 3,2 million jobs (BLS data);

10. Middle-class incomes of Americans and Europeans increased by 1988-2008% from 1 to 5, while middle-class incomes in Asia grew by 60-70%, 5% incomes of the richest people in the USA and Europe grew by 40-45%. Globalization has deprived the middle class of jobs in the West, has enriched the owners of companies and increased the well-being of the population of the poorest countries of Asia (Harvard Business Review, Eranko Milanovic);

14. In 2015, out of 1 750 000, approved African-American consumer banking loans accounted for only 36 500, or 2% of total issuance (US Department of Housing and Urban Development (HUD), Federal Housing Administration (FHA)); 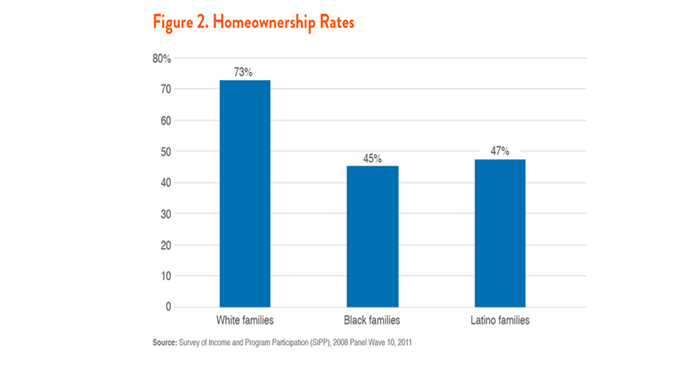 15. Only 45% of African American families and 47% of Latin American families are homeowners, despite the fact that among white Americans this proportion exceeds 70% (Study of income and participation in the mortgage lending program, Panel Wave 2011);

American voters were the main losers in the globalization of the world economy. Their interests were deliberately neglected over the past 20 years, cleverly disguising the dismantling of the industrial sector and the social sphere with gigantic debt borrowings, at the expense of which votes of dependents and minorities were bought, ensuring the victory of the establishment in the presidential election.

The US came up with 2016 with a national debt exceeding 100% of the country's GDP and a national debt of households exceeding 200% of GDP. The American society is divided and atomized, and the scale of property inequality brings it to the top 10 countries by the share of wealth concentrated in 1% of the richest people in the country. Despite the liberal and politically correct rhetoric of the authorities in the person, including the first African American president, the level of inequality among racial and national communities continues to increase rapidly, and the degree of social tension has already gone beyond the ordinary problem and turned into a series of bloody clashes between citizens and the police, as well as attacks on policemen.

The country's labor potential is rapidly drying up, and the proportion of dependents who do not pay taxes and do not create added value for the economy is growing rapidly, taking the most valuable cadres - young Americans whom the system demotivates to work in favor of living for benefits, which the remaining able-bodied citizens will have to pay.

Fatigue of US citizens from the unchanged course of liberalism, political correctness and globalization should have led to a paradigm shift a long time ago, but this could not happen in the absence of a strong charismatic leader. Donald Trump, no matter how controversial and scandalous his image, is an outstanding, strong-willed and very charismatic person, and that is why his victory became possible with such a serious separation from the establishment representative. 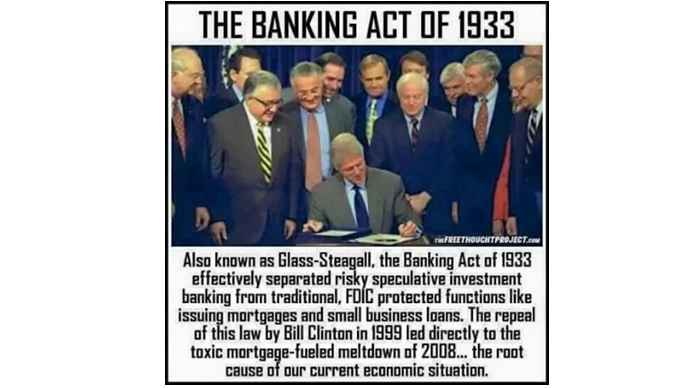 Ctrl Enter
Noticed oshЫbku Highlight text and press. Ctrl + Enter
We are
What you didn't want to know about EnglandHow I was held in this election
Military Reviewin Yandex News
Military Reviewin Google News
31 comment
Information
Dear reader, to leave comments on the publication, you must to register.