January 30 2012
10
The gun of caliber 152 mm, model 37 of the year, known as the ML-20 and received the index 52-G-544А - domestic howitzer gun, used in the period 2MB. HRP was massively produced from 37 to 46 year. Used (and used) by many states of the world. It has been used in almost all military conflicts since the middle of the 20 century. One of the most powerful domestic self-propelled units 2МВ JSU-152 and SU-152 were equipped with these howitzers. Of the guns that came into service - the ML-20, one of the best design solutions for barrel guns to this day. ML-20 played a huge role in the development and modernization of domestic artillery systems in the second half of the 20 century. 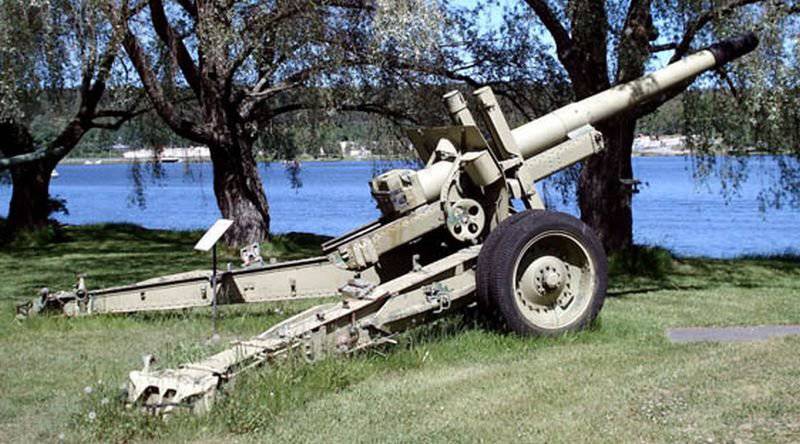 Creating ML-20
By the 30 years, only the siege weapon of the 1910 model of the year was adopted by the Red Army from the artillery corps. The gun was created by the French company "Schneider" for the armed forces of Russia. He was actively used in the First World War and in other military conflicts. By 1930, this tool was already obsolete, but it is still being modernized. Combat characteristics have increased, but mobility, angle and speed of pickup left much to be desired. The last time they tried to modernize it in 35-36 was at plant No. 172, but this line of work did not support the main art department. Designers of the plant are beginning to develop a new tool.

Factory designers created two guns ML-20 and ML-15. Creation of ML-15 was carried out by request of the main artillery administration. ML-20 - own initiative of designers. From the obsolete cannon they inherited - the barrel, bolt, anti-recoil device. In the middle of 36, the ML-15 is sent to a training ground for testing. Tests are recognized as unsuccessful, and the instrument is sent for revision. Beginning of 37 of the year - repeated tests of the modified ML-15, the tests are considered successful. The ML-20 gun was sent for testing at the end of 36, and in 37, military tests are being successfully completed. After these tests with minor modifications, the ML-20 is recommended for use in the armed forces. The end of September 37 of the year - the ML-20 officially, as the 152-mm howitzer-gun of the 37 model of the year, is accepted into service in the Soviet army. The ambiguous choice of the GP-ML-20 instead of the GP-ML-15 is not very clear today. The ML-15 was clearly lighter than the ML-20, and the transportation speed was quite high at that time - up to 45 km / h. The modern and complex design of the fire station part is definitely not listed as a flaw in the ML-15. By the way, after some time, the GP ML-20 was upgraded, and the carriage resembled the design of the ML-15. Some sources report that the choice was made because of the financial side of the issue - production of the ML-20 was cheaper than the ML-15. 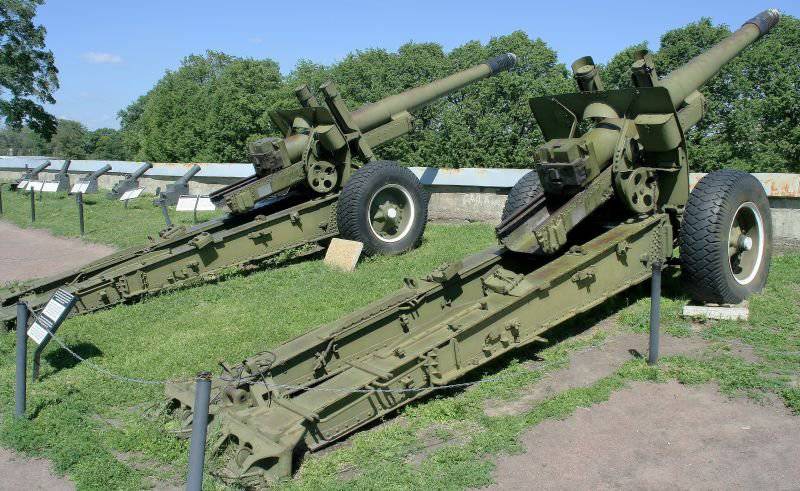 Construction ML-20
As the name suggests ML-20, it is an artillery system with a predominance of howitzer properties. Possessed with a design and carriage frame sliding execution. The barrel had two versions - monoblock and bonded. The rest of the equipment: piston valve, hydraulic recoil spindle brake, hydropneumatic knurling. Charging GP - separate. The shutter is equipped with a mechanism for the forced ejection of the liner when opening after the shot is fired, and a safety device that locks the shutter after separate loading, but before the shot is taken. If necessary, when it is necessary to discharge the howitzer gun, then switch the fuse to produce the opening of the shutter. The retention mechanism of the liner helps to produce loaders at high angles. Shooting is done with a trigger cord, which, when pulling, pulls the trigger. MP-ML-20 is equipped with a mechanism of mutual isolation, he did not allow the gun to open the device if the anti-recoil devices are not connected to the barrel in the correct way. Muzzle brake with slit-like holes, softened the impact on anti-rolls with a carriage. The hatchbox with the cusher was provided for 22, and a liter of special liquid, the pressure in them was equal to the 45 atmospheres.

A distinctive feature of the GP ML-20 - a set of initial velocities and elevation angles, which are set by one of a dozen projectiles. The result of such a set, a howitzer for ammunition with a hinged trajectory, a gun for ammunition with a flat trajectory. ML-20 was equipped with a telescopic type sight for making a shot at a direct fire, and a panorama for firing a shot at the outboard trajectory. Due to the fact that the ammunition used turned out to be quite a lot, the calculation of various corrections and trajectories for each of them separately would take a sufficiently long period of time - under them create a weather ballistic adder. This solution is a combination of a ruler of a logarithmic type and reference table. When using it, the time to calculate the trajectory and weather data for firing has been significantly reduced. Successful use of the adder during 2MB showed its high efficiency. After the 2MB, the steel adder was produced with all the new weapon models. The carriage, having a sliding-type bed, was equipped with a balance mechanism and a cover in the form of a shield. The metal wheels had rubber tires and leaf springs. The movement of the MP-ML-20 was carried out with the trunk pulled. The transition for combat use took an average of 9 minutes. The speed of movement in the field - 5-8 km / h. Lafet received the name "52-L-504", was also used in the modification of 122 mm A-19 guns.

Application of ML-20
Basically, the ML-20 was used as an instrument of closed positions, and was used to destroy and destroy open and concealed enemy manpower, fortifications and barriers, and objects located on the front line of the front. The HE-540 high-explosive fragmentation grenade fuse, set for fragmentation, gave a grenade weighing 43.5 kilograms, the following striking characteristics: 8 meters deep and 40 meters wide from the place of impact. A smaller number of fragments compared with howitzer grenades, provided armor-piercing up to 3 centimeters. The fire with such grenades allowed to defeat not only the personnel, but also the armored vehicles of the enemy. All armored vehicles were damaged to medium tanks inclusive. Technicians with heavy armor, grenades disabled the chassis, guns and sights. 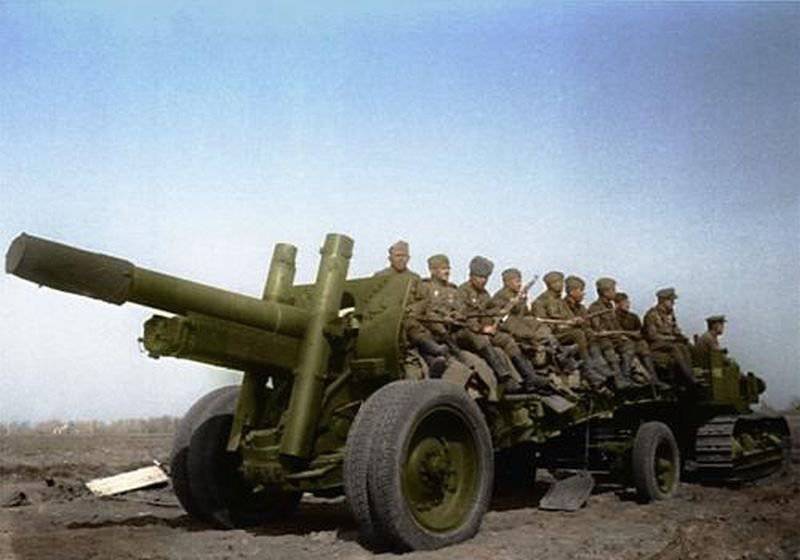 The first use in combat - fighting on Halkin-Gol. Used to destroy and defeat the fortified buildings of the Mannerheim Line. It was used in World War II, played a prominent role in the Kursk Bulge as an effective means of dealing with the latest tanks and enemy armored equipment. After the Victory, well-proven weapons were delivered to friendly countries, were used in their own armed forces for a long time, and participated in many major military conflicts of the second half of the 20 century. Some countries in Africa and Asia still use the ML-20 in the military.