"Often and from the Ukrainian side intercept our devices" 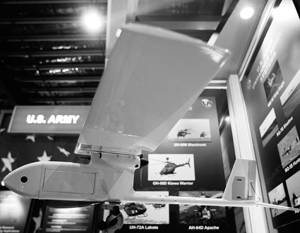 “We have absolutely symmetrical working methods. The difference is that the United States, Israel and some countries of Eastern Europe help the Ukrainians in this, ”a representative of the Unmanned Center told the newspaper VZGLYAD aviation DNR Alexander Zhuchkovsky, commenting on the complaints of the Ukrainian General Staff about the poor performance of US-made UAVs used by the APU.


The command of the Ukrainian Air Force on Thursday acknowledged that the Raven RQ-11B Analog drone supplied by the United States for use in the Donbas has a big drawback: they can be hacked and intercepted, and their signals can easily be muffled. US officials on condition of anonymity also acknowledged that the conflict conditions in the Donbass proved to be much more complicated than they expected. The US Army still uses these drones, but upgraded to the digital version.

The military adviser to the head of the General Staff of the Armed Forces of Ukraine, Nathan Khazin, stated that he was disappointed with the drones set and would have returned them as soon as possible. "From the very beginning, the decision to purchase drones for use in the conflict was wrong," Reuters quotes Khazin. In July, the United States handed over a batch of 72 mini-UAVs to 9 million dollars to Ukraine. In October, the people's police LNR intercepted one of them.
The representative of the center of unmanned aviation self-proclaimed DNR, militia, volunteer Alexander Zhuchkovsky told the newspaper VIEW why the Ukrainian military could suddenly make claims to overseas drones.

VIEW: Alexander, is it true that the militia often intercepts Ukrainian UAVs?

Alexander Zhuchkovsky: It really happens, but rarely. The UAV used by the Ukrainian Armed Forces has a good protection system; it’s not easy to land them. In general, there is a competition between our and Ukrainian specialists. On some sectors of the front, the situation with drones is better for them, for others - for us. Often and from the Ukrainian side intercept our vehicles.

LOOK: Looking from your side of the front, are American drones bad?

A. J .: Strange things said this military adviser. In our opinion, with the unmanned aircraft from the APU in general, now everything is in order. They got good devices that are refined to fit their needs. Mostly used not only American, but also Israeli. In addition, along with the drones come foreign experts who either work on the front line themselves or train personnel of the Ukrainian Armed Forces.

VIEW: And what is the revision?

A. J .: By the way, traces of refinement are visible on intercepted drones. For example, artisanal attempts to make so-called combat drones equipped with explosives from a UAV. Such a refinement leads to an overload of the device, which is why it eventually falls.

VIEW: What is easier - to intercept or knock down?

A. J .: Of course, to intercept. If it rises to a height of 500 meters, it is simply not visible. Much depends on the weather. To knock down such a device from anti-aircraft guns or even more from small weapons extremely difficult. There were only isolated cases, and this is not because someone consciously set himself such a goal. Just fired at random.

VIEW: UAV used only for reconnaissance?

A. J .: Task number one is intelligence of the first echelon of the enemy defense. Good, modified vehicles can fly to the second and third echelons. But in this form it is pure intelligence, without any accompanying tasks. Another drones perform tasks on the adjustment of artillery fire. If we are talking about direct hostilities, the device simultaneously transmits the coordinates and reconnaissance and artillery calculations.

If we talk about the status of the truce, the UAVs investigate the position of the enemy, the accumulation of armored vehicles. All this is plotted on the map, and in the case of the intensification of battles, the artillery is working on the applied coordinates.

In principle, we have absolutely symmetrical methods of work. The difference is that the Ukrainians are helped by the States, Israel and some countries of Eastern Europe, their work is set at the state level. But we are mainly assisted by individuals, and not by the state as a whole.
At the beginning of the war, we were supplied with quadrocopters worth only 80 – 100 thousand rubles. Over time, increased experience, accumulated technical base. If the conflict drags on, we will have more experience and a better technical base.

Now we can say that there is full-fledged unmanned aircraft in the Donbass. In Donetsk, our center of unmanned aircraft has been operating for two years. We are building a UAV thanks to the national money we collect. There are drones in separate divisions, regiments and battalions, which the fighters either assemble on the spot or receive from well-wishers from the “mainland”, from Russia. Progress has been substantial.

VIEW: You say that the APU as a whole is equipped with good drone. Why then did Khazin make this statement?

A. J .: It seems to me that this is just a separate episode within the Ukrainian political stories. Maybe Khazin, through public recriminations, is simply bargaining with someone in the United States. Ukrainians, on the contrary, usually appreciate Western military assistance. Maybe this is somehow connected with changes in the American administration and fears that the US will slow down military support.