Why does Japan strengthen the Self-Defense Forces?

December 23 2016
19
December 22 Japanese Prime Minister Shinzo Abe approved the country's budget for 2017 year. One of the main differences of the new Japanese budget is an increase in military spending by 1,4%. Thus, the Japanese military budget in the coming year reached a record high for all the postwar years and amounted to 43,66 billion US dollars. The increase in military spending was quite expected. Despite the defeat of Japan in World War II, the revanchist sentiment in this country was always strong, and now, more than seventy years after the end of the war, Japan considers itself entitled to resume the combat effectiveness of its armed forces.


As you know, in Japan after the war, the imperial army and navy were renamed the Self-Defense Forces. This name, as it were, emphasizes the peace-loving nature of the policy of the Japanese state in the post-war era. However, although Japan’s Self-Defense Forces are much smaller than the pre-war imperial army and fleet, but their combat readiness was always maintained at a fairly high level. Despite the fact that after the war Japan was forbidden to have its own armed forces, military production and military educational institutions, in 1954 the Self-Defense Forces were created. The leading role in their creation was played by the United States, which needed an additional ally in the Asia-Pacific region. Moreover, the US position in the Far East was very shaky at that time - the Soviet Union, China, North Korea, and North Vietnam adhered to communist ideology, in Indochina, the Philippines, and the countries of the Malay archipelago, the rebel armies of the Communists fought, and the serious allies of the USA the region was practically nonexistent. The Philippines, Thailand or South Korea, of course, could not represent serious competition not only to the Soviet Union or China, but also to North Korea and North Vietnam. 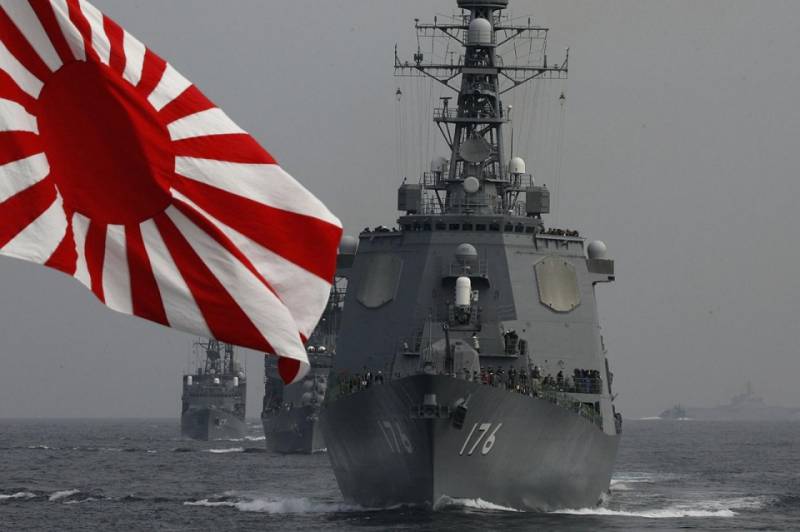 Therefore, the United States decided to "arm" Japan. Already in March, the 1954 agreement was signed with the United States on military assistance, and in 1960 - the “Agreement on mutual cooperation and security guarantees”, originally concluded for ten years, and in 1970, extended indefinitely. So Japan became the most important strategic partner of the United States in the Asia-Pacific region, and Washington began to support Tokyo in building, strengthening and arming the Self-Defense Forces. This policy was combined with the existence of American military bases in Okinawa, against which the Okinawan public and the Japanese left and nationalist forces repeatedly protested.

Japan’s 2017 budget for the year does not include an increase in military spending. Tokyo plans to significantly increase the combat potential of the Self-Defense Forces. First of all, Tokyo plans to improve the safety of the Ryukyu Islands in the East China Sea. To this end, it is planned to transfer a significant part of the Self-Defense Forces units from the island of Hokkaido, located in the north of the country. Given that Hokkaido is located in close proximity to the Russian border, the transfer of military units from Hokkaido to Ryukyu indicates that Japan perceives as a potential source of military threat not so much Russia as China. 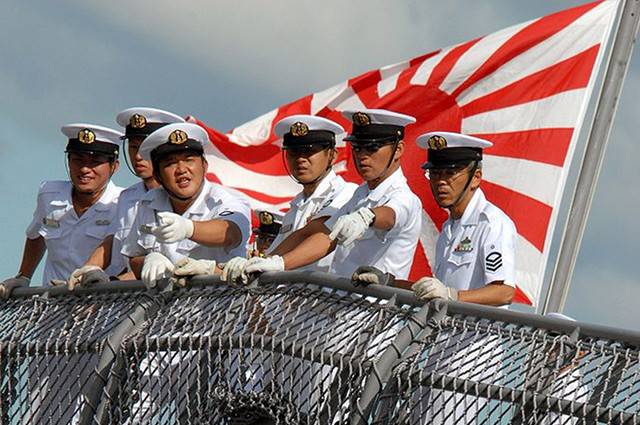 The Japanese leadership is also going to modernize the Self-Defense Forces by minimizing the weapons and military arms outdated and ineffective in the "island" conditions of Japan. So, the Japanese leadership is very cool on tanks, which are recognized as ineffective in modern conditions, especially for Japan. Currently, the Japanese Self-Defense Forces number more than 150 thousand people. They include 1 tank and 9 infantry divisions, 3 infantry and 2 mixed brigades, 1 airborne, 2 anti-aircraft artillery and 5 engineering brigades, 1 helicopter brigade, 3 training brigades, as well as a training regiment, artillery group and three groups air defense. As of 2010, the Japanese Self-Defense Forces had 946 tanks, 70 infantry fighting vehicles, 100 reconnaissance combat vehicles, 560 armored personnel carriers and 220 armored vehicles. Now the number of tanks will be reduced. The focus has shifted to the purchase of amphibious vehicles for the forming amphibious units of the Naval Self-Defense Forces.

The Japanese leadership plans to pay much attention to the development of missile defense. This is directly related to the policy pursued by the neighboring DPRK. Regular military exercises of North Korean rocket engineers do not leave the Japanese leadership and command of the Self-Defense Forces indifferent. The DPRK is viewed in Tokyo as an extremely politically unpredictable country, so Japan is going to protect itself as much as possible from the possible risks associated with the behavior of the North Korean authorities. Moreover, Pyongyang has repeatedly stated that it intends to develop and expand its ballistic program. So far, Japan’s air defense forces cannot really be called very serious, both in numbers and in armaments. 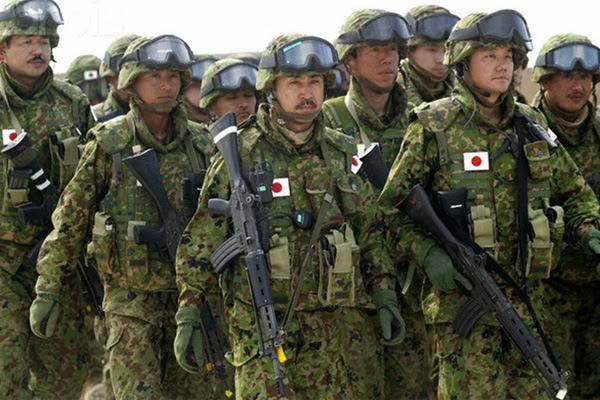 Of course, the Japanese Self-Defense Forces in the form in which they exist now will not be able to resist such adversaries as the DPRK and, especially, the PRC. In fact, the task of the Japanese Self-Defense Forces in the event of a serious armed conflict is to hold out until the time when the United States will step up for the Land of the Rising Sun - the country that once bombed Japan with atomic bombs, and now serves as its main military-political partner and patron. At the same time, many analysts believe that it is precisely in defense that the Japanese armed forces will be able to show themselves perfectly and fully justify their name. After all, the training and the teachings of the Self-Defense Forces of Japan pay great attention.

As you know, after the creation of the Self-Defense Forces began in 1954, it was decided to ban their use in international military conflicts outside of Japan. The exception was the presence in peacekeeping operations - in Palestine, in Iraq and in Cambodia. But there Japan was represented by non-combat units. Thus, the Japanese Self-Defense Forces are deprived of the experience of real participation in hostilities. This is a non-military army, but the Japanese command seeks to compensate for the lack of combat experience with regular military exercises organized with the direct support of the United States.

Meanwhile, back in September 2015, a landmark event occurred in the modern military-political history of Japan. The upper house of the Japanese parliament voted in favor of a bill authorizing the use of Self-Defense Forces outside the borders of the Japanese state. This decision put an end to the seventy-year history of the complete neutrality of post-war Japan. The adoption of this law was initiated by Prime Minister Shinzo Abe, who explained the need to change the strategy of the Japanese state with numerous modern risks, including the policies of neighboring China. Despite the protests of numerous Japanese pacifists opposing the strengthening of the Self-Defense Forces and against the adoption of a law on their use outside the country, the parliament voted for the initiative of the Prime Minister. Now Japan has the opportunity: 1) to provide military-technical assistance to the Republic of Korea in case it is attacked by the DPRK, 2) to shoot down North Korean missiles that are sent to the United States of America - before the adoption of the law, the Japanese air defense could only shoot down North Korean missiles if they were sent to Japan itself (3) to participate in hostage-free operations - Japanese citizens outside the country, 4) to render and use unlimited th military support from the US and other allies, 5) to conduct operations to protect shipping lanes posts (the latter circumstance is particularly interesting in the context of Japan's territorial disputes with China).

The Japanese opposition considered that the adoption of the new law not only violates the half-century neutrality provided by the Japanese Constitution, but also obliges the country to provide military assistance to the United States. Given Washington’s aggressive foreign policy, this could lead to the fact that the Japanese Self-Defense Forces could be drawn into numerous armed conflicts around the world in which the American army is involved. In addition to the United States, an agreement on military cooperation in 2007 was also signed with Australia, which means that the Japanese Self-Defense Forces can also be sent to help the Australian allies.

As for the direct potential opponents of Japan, they include, first of all, the DPRK and China. Most in Tokyo fear a missile strike from the unpredictable North Korea. In second place in the list of threats is possible hostile actions by China, with which Japan has unresolved territorial disputes around the Senkaku Islands, which are currently under Japanese control, but for which China has always claimed. As for the Russian Federation, Japan does not consider our country among the primary potential military adversaries. But this does not mean that Tokyo completely excludes the possibility of conflict with its powerful northern neighbor. Despite the fact that economic relations between the two countries are actively developing, especially after the favorable regime was established in the Far East to attract Japanese investment, tensions between the Kuril Islands also persist between Russia and Japan. For Japan, regaining control of its formerly owned territories is of fundamental importance. For Russia, any concessions to Japan are also unacceptable.

Japan’s military potential is also building up against the background of intensified discussions on the prospects for the withdrawal of US military bases from the Ryukyu archipelago. So far, despite the active protests of the Japanese population, especially the residents of Okinawa, the United States does not plan to close its bases on the island. The Japanese authorities also do not insist on the withdrawal of US military bases, since they are well aware that the presence of American troops on the Ryukyu is an additional trump card in ensuring national security and preventing potential threats from China and the DPRK. Security considerations for the Japanese leadership are undoubtedly far more important than the discontent of the local population with the presence of American troops on Japanese soil.

Ctrl Enter
Noticed a mistake Highlight text and press. Ctrl + Enter
We are
Eastern turn: what is he carrying to us?"Hawk" Shinzo Abe and authoritarian Japan
19 comments
Information
Dear reader, to leave comments on the publication, you must to register.