December 23 2016
108
Imagine ... One crook, second crook, third crook. In the current year’s calendar, they have an event in the house of a person who knows that they are all fraudsters and who have repeatedly urged others to pay attention to the facts of their fraud and take some measures. When the event was just about fraud was not yet known.


Attention - a question! What do you think, will scammers go where the whole essence of their intrigues is well known, and where they can explain on their fingers that cheating is not good at all ... It seems that the answer is obvious: they won't go, but get together in a “mighty handful” , in order to reveal the facts of his fraud, to fog up, humble and get dry and clean from the muddy water, which they themselves have harassed.

Exactly on the same principle, the Norwegian “asthmatics” biathletes act, who have announced that they will boycott the World Cup in Tyumen. But not only the Norwegian "coughing" and shooting skiers made a statement about the boycott. At the moment, in the group of people who decided not to show their nose in Russia with traces of doping, representatives of other biathlon federations: Britain and the Czech Republic. French biathletes also say about the possible rejection of the Tyumen starts. In general, the herd instinct of fraudsters from sports, for which the motto “sport out of politics” doesn’t play any role, has worked. Those who are “very sick” and to whom Mr. McLaren wrote a reference book from WADA that allows to use virtually any of the prohibited substances (well, so as not to cough during the race for rivals ...), no doubt, the next “brothers Williams, new asthmatics and hypertensives. And all this “guard” of hydromorphone players and prednisoloners, capable of running with the speed necessary for the record, even if the skis are “shoved” with their noses down, gather in their mezhdusoboychik, so that there - “between themselves” - to reveal who has the WADA certificate “longer” "... 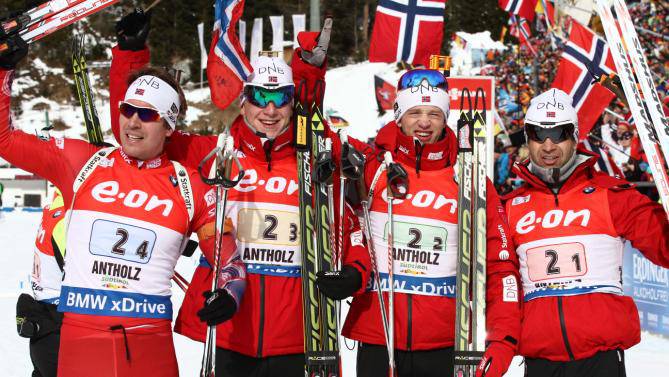 So, it should be stated that the attack on Russian sport, and through it and on Russia itself, continues. Depriving Sochi of the right to hold a championship in bobsled and skeleton, defaming the Biathlon World Cup in Tyumen is all part of one chain. If there is an attack, then there are also “fighters”. The same WADA, which is working on 30 of pieces of silver from customers, decided to put athletes on as such "fighters". Those who, forgive me, are eating forbidden drugs by handfuls, and those who are out of their skirts, “wait,” flash, again forgive, the scrotum during the match, waving help about his illness, also find the audacity to declare the fact that they are competing to Russia, they say, not a foot ... Yes, it is clear that not a foot - obviously there are fears that their “anti-asthmatic” drugs will be checked for compliance with the WADA certificates, as well as the WADA certificates for that they are actually burying the real sport.

If the situation continues in the same vein, then professional sport from the fact that it gives strength, dexterity, health, endurance and entertainment, will eventually turn into a competition of sick people. At the very least, people who have all the documents that they are sick. And if these people are ready to declare that they have the disease in its real absence, only in order to “eat” the Vadovskaya ban, then it already speaks of problems of a psychological, and even mental, nature. This army of unhealthy collected not in order to give joy to the fans, but in order to turn the sport into a zombie show with a political touch. It remains to introduce the unwritten Eurovision regulation, when the bearded frightened freaks and transgender people will start, who will receive a certificate from McLaren that they can eat even meldonium, even plutonium ...

It can be assumed that if this bacchanalia in sports is not stopped, the defamation will reach the World Cup, which is to be held in Russia in 2018 year. This is for those who Maclaren writes unsubstantiated reports, suitable only for consumables in cat litter, a serious goal. It is one thing - the stage of the Biathlon World Cup, and another thing - the competition of the four years of football, when at stake is not only the prestige of the country hosting the tournament, but also billions of dollars.

There will be going to the end: to announce the agents of the FSB, who have replaced urine Mutko, about the personal involvement of President Putin in all this about scratching the test tubes. They will climb, climb and climb, until the answer is given. And the answer is not at all in the style of “years mi spik frome May hart”, but the answer is practical, real, such that the same McLaren was looking for the fifth corner. Someone will say that this is what provokes us, they say, we need to calmly, clearly and carefully. And who says that the answer will be "fuzzy and unweighted." In any case, there is time, and since they themselves, like fire, are afraid of our unpredictability, then we must meet our expectations ... Scammers take the right place and put them on 360 degrees for a review. Lawsuits should not be in the babbling of the aforementioned “From May Hart”, but real - billions of dollars.

West adores lawyers, so "we have them." Why not work in this direction for the country's chief lawyer, Dmitry Anatolyevich Medvedev. Well, it does not add up, sorry, for now, the impression that someone TAM is seriously ready to protect the interests of our athletes. But after all, the “friends of Russia” have their own calculations for this: people's discontent, fermentation, reaction, tires, everything. And if such a calculation, then again, asymmetrically - to do everything so that the smell of burning tires (or something else) at the windows of their residence could be felt by WADA bureaucrats who sign that they are not just covering criminal schemes in sports, but also publishing frank defamation, without providing any evidence of a “doping support system in Russia”. The main thing is that against the background of all this emotionality, the work was carried out without emotion. And frankly I would like to hope that it is precisely the lack of emotionality on this issue on the face of the same Dmitry Anatolyevich - you yourself know who to be clever. Well, if there are “tricky moves” everywhere, then somewhere it has to grow together ... Is it possible that everything is on Trump? ..