Enfield №2 - revolver, created for the sake of convenience

December 27 2016
86
How often in stories weapons We find examples of purely subjective evaluation of one or another of its samples? And if objective factors were superimposed on them, then this led to the most real “adventures of inventions.” 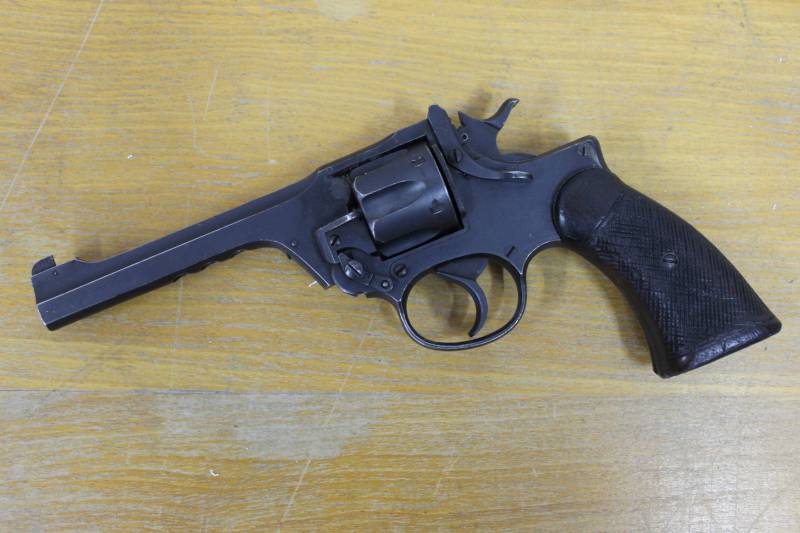 Here it is - Enfield revolver "Revolver No. 2 Mk I". Even outwardly it is clear that this is a very technological product, the trunk in which is milled together with the top of the frame.

For example, the same Samuel Colt created a breakthrough pattern, with the very first model carved out of his own wood. He set up production, stubbornly went to the goal, built the factory city "Coltsville", which became the prototype of the "city of the future" in Jules Verne's novel "500 million begums" and ... everything! Then it was as if it were closed, and when the inventor came to him through the drilled drum for cartridges with a metal sleeve, he drove him away! He went to "Smith and Wesson" and so appeared "Smith and Wesson" №1, and then all the other revolvers. And then Colt’s widow had to hire engineers to bypass the Smith and Wesson patents, which made the famous Peacemaker Colt appear so late. 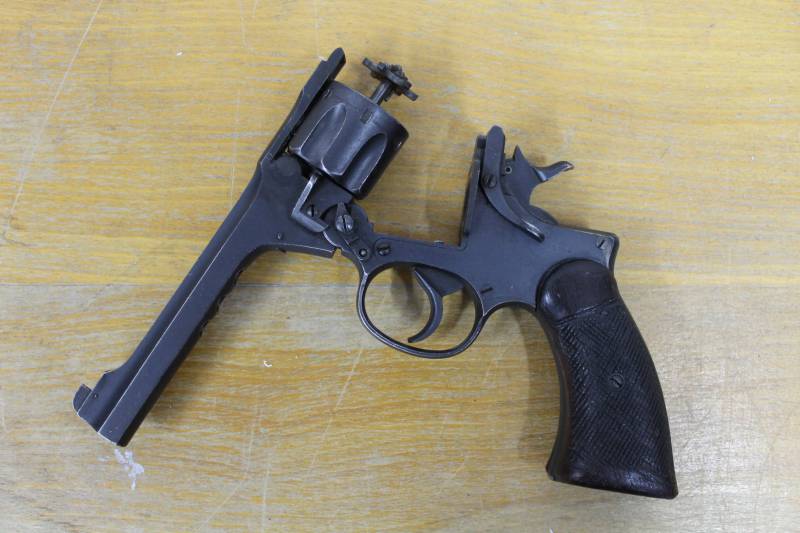 And here he broke. An extractor is pulled out of the drum.

The same story repeated then in Russia. The Smith and Wesson revolver, adopted by the Russian army, showed an excellent destructive force of the bullet, surpassing, surprisingly, the destructive force of the bullet of the Berdan rifle of the same caliber. What didn't you like? And the belt on which the holster was hanging was twisting due to its severity! So what? They would come up with shoulder straps and ... everything! But no, they decided to adopt the Nagan revolver, in fact, a one-time weapon, since it was in no way comparable to the “American” in terms of the speed of discharge and loading. He was discharged with just one movement. The gun was to be “cleaned” with the extractor seven times in a row, then the cartridges were inserted seven times. Were there any objective reasons for replacing one sample with another? Only one - both revolvers and pistols became more and more status weapons, and in real combat they were used less and less. But rearmament cost a lot of money. It was simpler to replace the black powder in the Smith and Wesson cartridges with smokeless ones, and introduce shoulder straps (by the way, they were then introduced!) In order to solve the “warping” and “smoke” problems. But what a destructive force! After all, with the Smithsons, they were hunting for bison ... 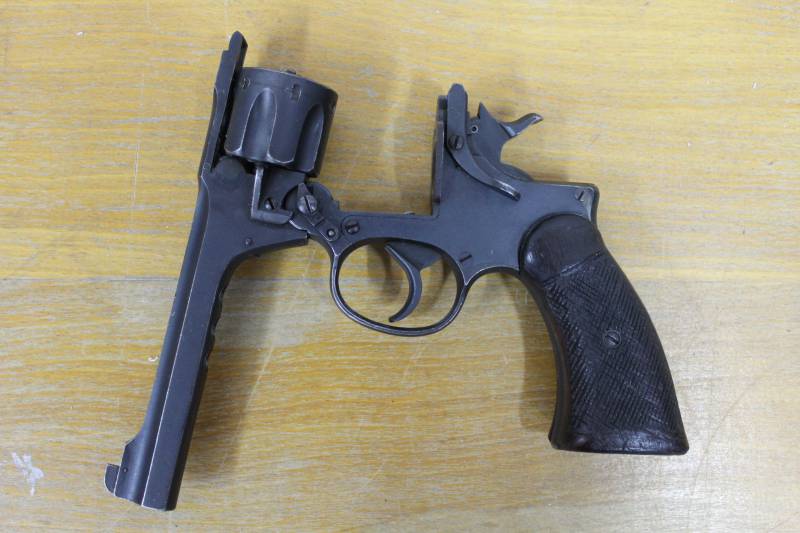 And now the extractor is hidden, and the revolver can be charged.

So progress in military affairs is not always absolute, sometimes it is very relative.

We have a similar example in England, where even in the 1870s of the 19th century, the English company "Webley and Son" (since 1897 was called "Webeley-Scott") began producing its revolvers. In 1887, the revolver of the Webley-Green system was released, which entered service with the British army and was used ... up to the 1963 year. Why so long? The fact is that the company offered the army a revolver with a tipping frame, which, firstly, was simple in fabrication, and secondly, it allowed to provide a very high reloading rate, comparable to the reloading speed of revolvers with a reversing drum.

Revolvers "Vebley" had a disconnecting body, consisting of two parts connected by a hinge. In order to recharge it, the barrel had to be folded down (just like in the Smith and Wesson system), the case was “breaking”, and the extractor automatically triggered, simultaneously ejecting all six cartridge cases from the reels. After that, all the drum chambers had to be filled in manually, but, nevertheless, the time savings were very significant. 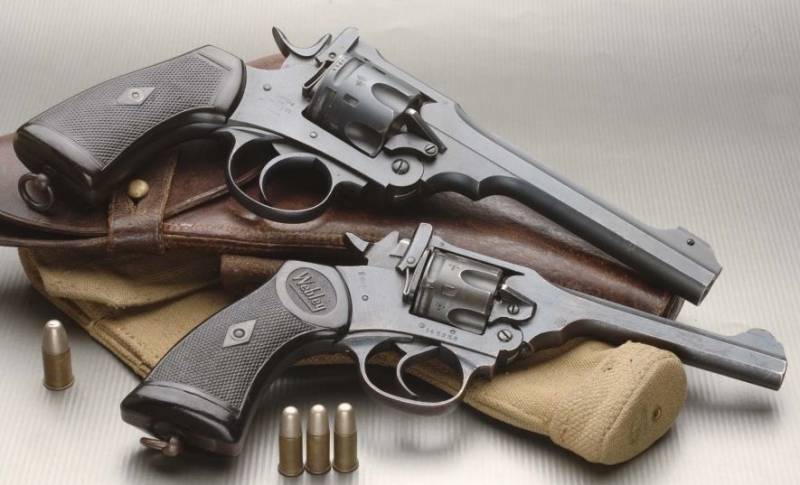 The original barrel length was 102-mm (4 inches), but then it was increased to 152-mm (6 inches). Coupled with a powerful powder charge and a blunt heavy bullet whose speed was 189 m / s, the revolver ensured the defeat of any living target, be it the most bloodthirsty and strong “savage”, but it was not easy to shoot such a revolver, despite the convenient “bird's” type handle head". The “webla” revolvers at that time exceeded their counterparts in shooting accuracy, but, again, there was one reason - a very soft descent. But the recoil when shooting was very significant. As, however, and the weight of the same Mk IV, constituting 1,09 kg without cartridges. 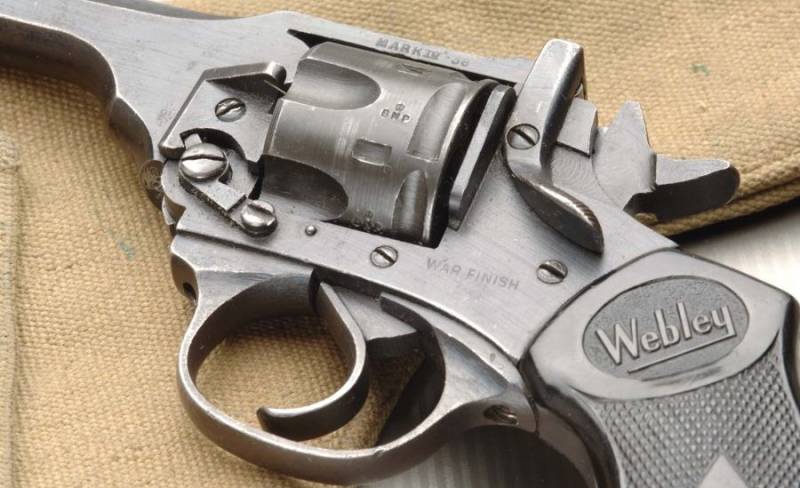 In the 1915, the Mk IV received another handle, sights, but the changes ended there, although a convenient six-clip was invented to it, which accelerated the reloading process even more. The revolver showed itself well in battle: he was not afraid of dirt, dust, moisture, but even if the cartridges ran out or he misfired, it could be used, without fear, as a baton. Breaking anything in it was simply impossible! Moreover, it was equipped especially for trench warfare ... with the Pritchard-Griner bayonet, which was mounted on the trunk over the front sight with an emphasis on the frame.

The Pritchard-Greener bayonet was a completely monstrous weapon.

To shoot this revolver even faster, Colonel GV Fosbury in the 1896 year patented its original modification - the self-loading revolver “Webley-Fosbury”, perhaps the most original revolver in the world.

It also had two parts, but only when fired, the upper part of the frame, which included the barrel, drum and trigger, rolled back along the guides of the lower part of the frame. The recoil cylindrical spring was in the handle and worked on a special lever, which the moving part came back. During this “ride”, the drum was cranked back and forth to feed the next cartridge to the line of fire and cocked. Again, this provided a very soft descent, simply incomparable with Naganovsky, and allowed to shoot very accurately, if not for one circumstance. The strong impact was reinforced by the movement of massive parts of a revolver, which made shooting it not very comfortable. At one time it was fashionable to buy the pilots of the then airplanes, who hoped that with the help of the “automatic revolver” they would be more likely to hit the enemy in the air. But then it turned out that the machine gun was still more reliable in aerial combat, but the weight in the 1,25 kg was too great. Moreover, in the trenches, this sample was useless because it was sensitive to contamination. Nevertheless, he managed to enter both history and literature (although he was not officially armed), so if in any book you read that someone was armed with an automatic revolver there is no fiction meant precisely "Webley-Fosbury." 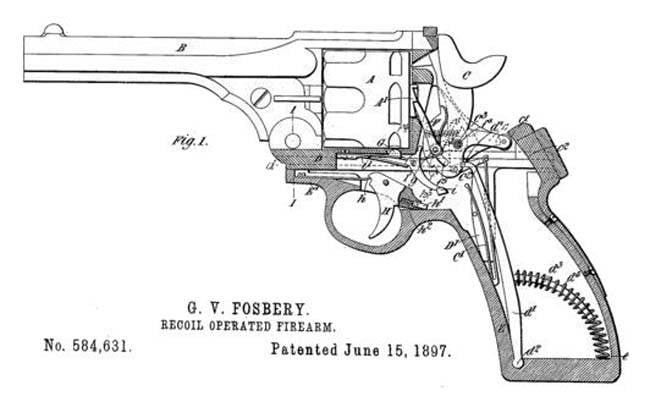 However, immediately after the end of the First World War, it became clear that it was simply unwise to spend a lot of time and effort on training British Crown troops to shoot from such a heavy revolver. This time, and the consumption of ammunition - that is, money. And all this for what? In a critical situation, someone killed a couple of opponents? Yes, they (in this situation) are not worth the metal that is spent on the manufacture of these weapons. Therefore, it was decided that now the army needs a small, and most importantly - an easy and convenient revolver, shooting smaller-caliber cartridges. The .38 caliber was chosen - that is, the 9,65-mm. The military decided that it would be easier to shoot, which means that the time spent learning to shoot and, consequently, the consumption of ammunition would be reduced. 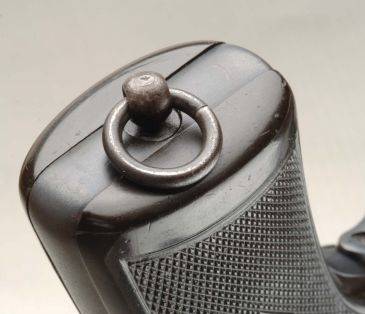 Mk IV - the end of the handle.

The company "Webley-Scott" then did not hesitate for a long time, but simply reduced the .NUMX revolver, and in this form offered it to the army team. It just happened that they approved the design, but the company did not give the order for a new revolver, but placed it at the Royal Factory of Small Arms in Enfield. And in 455, the revolver went into production, but not under the brand name “Webley”, but under the brand “Enfield” “Revolver No. 1926 Mk I”. It weighed 2 g, had a barrel length 767-mm and bullet speed 127 m / s. It was believed that the shooter armed with them should hit a target from him at a distance of 183 meters, no further. And at this distance a new revolver worked very well. 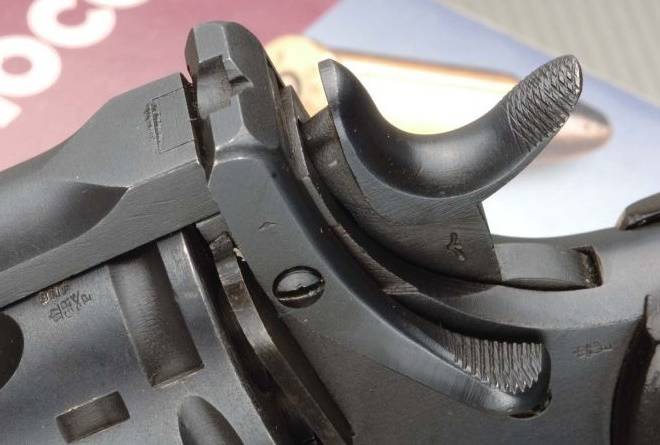 Mk IV - the frame fastener lever is clearly visible. You had to press it with your thumb, after which the revolver opened.

Since every weapon depends on the cartridge, it must be said that the cartridge used in this revolver. And it was significantly different from the German 9-mm cartridge "Parabellum". With the .38 caliber, the weight of the 200 facets bullet of the British patron was more than twice and heavier, but now it flew twice as slowly as the German one.

In any case, Vebley & Scott was discouraged by this turn of affairs, but ... decided to start producing its own .38 caliber revolver and gave it the name Mk IV, although the only difference between it and its army counterpart was marking the handle. However, they also had certain differences inside, so they were not interchangeable. 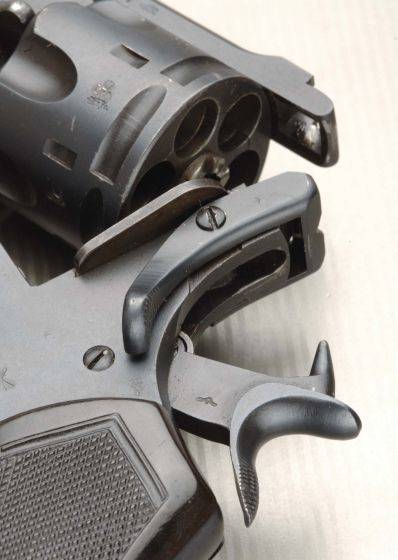 Mk IV - U-shaped fastener of the upper part of the frame and the hammer head is clearly visible, short and durable.

The rapid motorization of the British army and the creation of large armored forces led to the fact that the new revolver also entered service. tank crews, and it was then that it turned out that it was not very convenient for tankers, since the trigger spoke in a tight tank was sure to cling to something. The solution was found quickly - it was simply removed, so that shooting from the new revolver, designated No. 2 Mk I * ("with a star *"), became possible only by self-cocking. As always, this reduced the accuracy of shooting, but only slightly, and they decided to neglect this drawback. 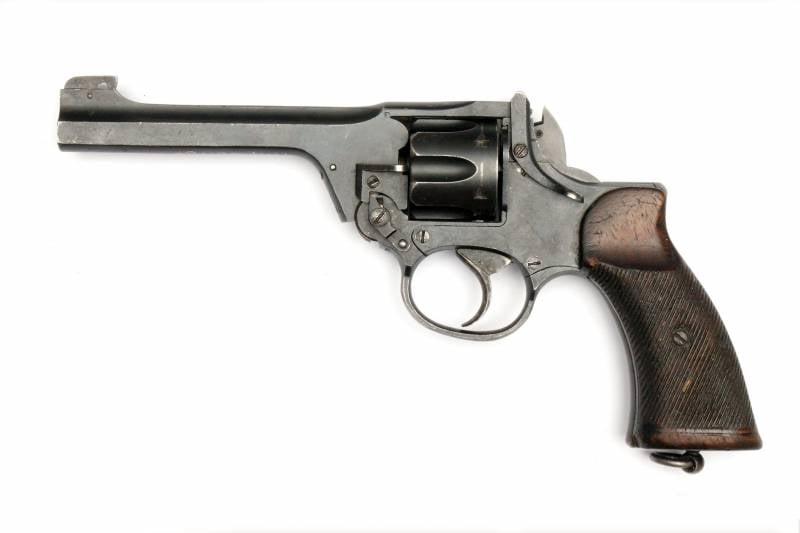 A revolver with a retracted trigger of the 1942 model of the year.

Well, by the 1942 year of the British army, mass character was needed, not the quality of the weapon, so any simplification was perceived by the military favorably, if only it would increase the output of the weapon. Therefore, the design of the revolver simplified even more, in particular, removed the fuse. The new sample number XXUMX Mk I ** (“with two stars”) has become even cheaper to produce, only if it fell on a hard surface, an accidental shot could happen. Moreover, now the commercial revolvers of the Mk IV went into action, so that the company “Vebley-Scott” still got its share of the war. Interestingly, immediately after the end of the war, all Mk I ** revolvers from the troops were withdrawn, but then returned back with the fuse installed. 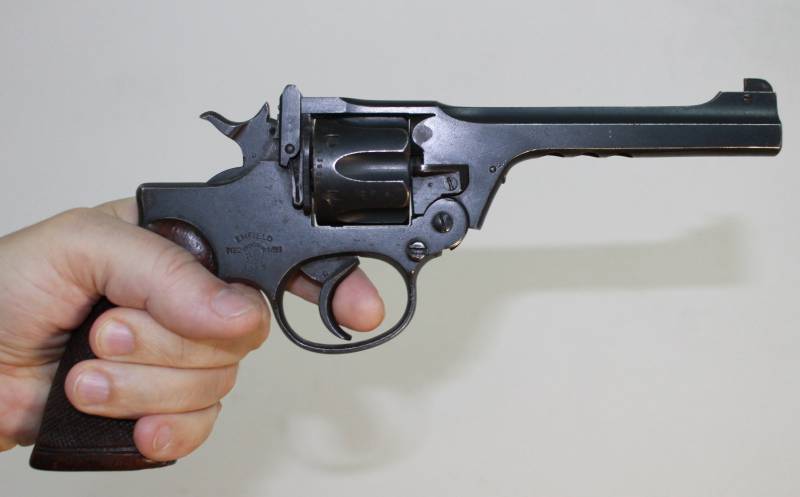 But this revolver (meaning the Enfield model) lies in the left hand. The shape of the handle is convenient for gripping, the revolver does not seem heavy, the descent is very easy compared to the Nagan revolver. Large sights are clearly visible and facilitate aiming.

Both of these revolvers were widely used not only during the Second World War, but also were in service with the British army until the 60-s of the XX century. Then they were transferred to the police, where they could be seen even at the end of 80's.