December 24 2016
75
Lunokhod-1 was the first successful rover, designed to explore other worlds. He was brought to the surface of the moon 17 on November 1970 of the year aboard the Luna-17 landing module. It was managed by remote control operators in the Soviet Union, it covered more than 10 kilometers (6 miles) in almost 10 months of its work. For comparison, the Mars Opportunity took about six years to achieve the same performance. 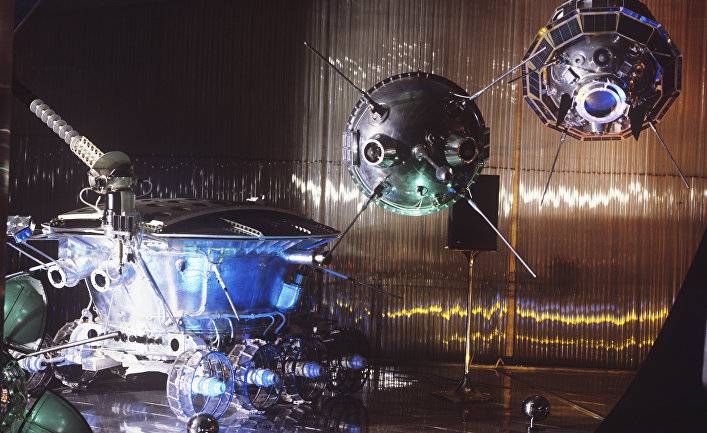 Participants of the space race

The Soviet Union pinned its hopes on sending a man to the moon with probe missiles. However, after a series of unsuccessful test launches, including an explosion on the launch site in 1968, with human casualties, the Soviet Union instead focused its attention on other lunar programs. Among them was the automatic landing program of the spacecraft on the lunar surface and remote control of the rover.

Here is the list of successes of the lunar program of the Soviets: Luna-3 (with its help, the image of the far side of the moon was obtained), Luna-9 (this device made a soft landing for the first time in 1966, that is, three years before the Apollo-11 flight and the landing of astronauts to the moon), as well as Luna-16 (this unit returned to Earth with samples of lunar soil in 1970 year). And Luna-17 delivered a remote-controlled rover to the moon.

Landing and descent apparatus on the surface of the moon

The Luna-17 unit successfully launched on 10 on November 1970 of the year, and five days later it was in the orbit of the Moon. After a soft landing in the Sea of ​​Rains, aboard the Lunokhod-1 on the ramp descended to the lunar surface.

“Lunakhod-1 is a lunar planetary rover, it resembles a barrel with a convex lid in shape, and it moves with the help of eight wheels independent from each other,” was noted in a brief message from NASA about this flight. “The lunar rover is equipped with a conical antenna, a precisely pointed cylindrical antenna, four television cameras, as well as a special device to influence the lunar surface in order to study the density of the lunar soil and conduct mechanical tests.”

This planetary rover worked on a solar panel, and in the cold night time its operation was provided by a heater operating on the radioactive isotope polonium-210. At this point, the temperature dropped to minus 150 degrees Celsius (238 degrees Fahrenheit). The moon is always facing one side towards the Earth, and therefore the light day at most points on its surface lasts about two weeks. Night time also lasts two weeks. According to the plan, this rover was to work for three lunar days. He surpassed the initial operational plans and worked 11 lunar days - his work ended on October 4 1971 of the year, that is, after 14 years after the first satellite of the Soviet Union was put into near-earth orbit.

According to NASA, by the end of his mission, the Lunokhod-1 had covered approximately 10,54 kilometers (6,5 miles), he had transmitted thousands of television images and 20 television panoramas to Earth 200. In addition, more than 500 lunar soil research was conducted with it.

The success of the Lunokhod-1 was repeated by the Lunokhod-2 in 1973, and the second vehicle had already traveled approximately 37 kilometers (22,9 miles) on the lunar surface. The Opportunity rover took 10 years to show the same result on Mars. The image of the Lunar-1 landing site was obtained using a Lunar Reconnaissance Orbiter lunar space probe with a high-resolution camera on board. For example, on the pictures taken in 2012, the descent vehicle, the Lunokhod itself and its trace on the surface of the Moon are clearly visible.

The retroreflector of this rover made a very surprising “leap” in 2010, when scientists sent a laser signal to it, which indicates that it was not damaged by lunar dust or other elements.

Lasers are used to measure the exact distance from the Earth to the Moon, and for this purpose lasers were used in the framework of the Apollo program.

After the Lunokhod-2, no other device made a soft landing until the Chinese, as part of their space program, launched the Chang'e-3 device with the Lynuhod, Yuytu. Although Yuuta stopped moving after the second moonlit night, it continued to remain in working condition and stopped functioning only after 31 a month after the start of its mission, and thus it far surpassed the previous record.

Ctrl Enter
Noticed a mistake Highlight text and press. Ctrl + Enter
We are
Since the launch of the first artificial satellite of the moon, 50 years have passedExploration of the moon is still difficult
75 comments
Information
Dear reader, to leave comments on the publication, you must to register.