The huge losses of the Armed Forces of Ukraine under Debaltseve

December 21 2016
239
The servicemen of the People’s Militia of the LPR delivered the bodies of the Ukrainian armed forces who died while trying to break through in the Kalinovka village to the Debaltseve morgue.


This was announced by the head of the People’s Police Colonel Oleg Anashchenko. 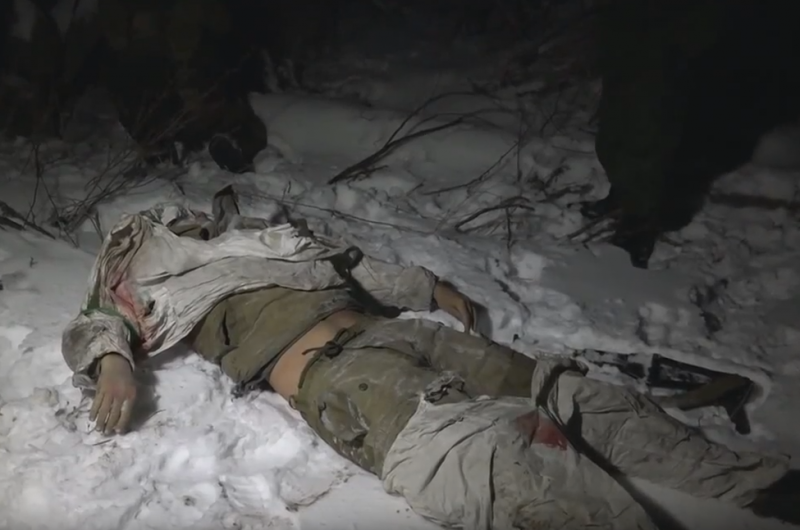 According to him, the corpses were found "in the positions of the LC, where an earlier attempt was made to break through the units of the Armed Forces of Ukraine."

“On the corpses there is a Ukrainian uniform and identification marks in the form of a green ribbon and Ukrainian chevrons. These bodies were taken to the morgue of the city of Debaltseve for further decisions, ”he said.

“Judging by the injuries, they could have been saved, but they were thrown by their command on the battlefield,” said the colonel.

"I also want to say that such attempts (offensive - note RV) are meaningless and this will happen with everyone who comes to our land," he stressed.

The armed forces of Ukraine in the course of attempts to break through in the area of ​​Debaltseve lost 40 people killed, and 50 of Kiev militants were injured.

This was reported by LIC Major-General Andrei Marochko, the official representative of the People’s Police of the LPR.

“We are reliably aware of the 40 dead and more 50 wounded Ukrainian soldiers from the 54 brigade and the 11 battalion of the 59 brigade Kievan Rus. Independent Ukrainian media have reported 100 dead, ”he said.

“However, the Ukrainian Ministry of Defense officially announced six dead and 19 injured,” added Marochko, noting that in this way the Kiev government hides the true losses of the Armed Forces of Ukraine, “but does not even consider nationalists for people.”

“Nobody takes into account their losses, at the moment we have not had a single appeal for the bodies of the dead.

They are simply not needed by the government, for whose interests they died, ”said the major.
“The Ukrainian junta is still not abandoning the use of force to resolve the conflict, despite the huge losses of personnel among the Armed Forces of Ukraine and the nationalist battalions. This is reminiscent of another wave of recycling of people who are already on the verge of understanding that their true enemy is a thieving government, warmed up in Kiev, headed by (President of Ukraine Petro) Poroshenko, ”the representative of the Republic’s Defense Ministry added.

“The commanders of the Ukrainian units once again showed their criminal nature.
So, the commander of the 54-th separate mechanized brigade Gorbatyuk decided to provoke the units of the People’s Militia of the Republic to violate the Minsk agreements in the Svetlodar arc area and went on the offensive. But his criminal intent failed, ”Marochko said.

“The Ukrainian command is attempting to resume large-scale hostilities in the Donbas.

It increases the combat strength, violating all the agreements signed, among other things, by the official representatives of Ukraine at the negotiations in Minsk, ”he said.

In the course of today's attempt at a breakthrough near the village of Kalinovka in the Debaltseve area, the Kiev militants lost two infantry fighting vehicles. This was reported in the press service of the People's Militia of the LC.

“In the second half of the day, the enemy intensified in the direction of the Kalinovka settlement. Having conducted powerful artillery training for one and a half hours, in 15.30 with forces over 50, a person with the support of three BMP units went on the offensive to the advanced positions of the People's Militia of the LPR, "said the defense department of the Republic.

“A blow from the flank of the enemy was overturned and clamped on both sides. Having suffered losses in manpower and having lost two units of infantry fighting vehicles, the enemy retreated to previously occupied positions, ”the People’s Police noted.

This was reported in the press service of the People's Militia of the LC.

The building of secondary school number 3 in Dokuchaevsk damaged during shelling by the Ukrainian military.

“About 16: 00, the Armed Forces of Ukraine fired from Dokuchaevsk BMP, the school building No. 3 was damaged,” said the head of the city administration, Alexander Kachanov, today.

Kachanov added that there were no students on the school’s territory at the time of the shelling. Information about the victims have been reported.