December 21 2016
24
Many Turkish citizens are unhappy with the humanitarian disaster in Aleppo, which extends to Turkey. The killing of the Russian ambassador in Ankara by a self-styled executioner could have been one of the manifestations of such discontent. Experts ask themselves: can Ankara and Moscow agree on the Syrian issue, or will the tensions between the two states remain?


In the last days between Turkey and Russia, despite all the statements of the Turkish government, tensions are rising: after the assassination of Ambassador Andrei Karlov, Moscow will freeze negotiations on the introduction of a visa-free regime for Turkish citizens.

Today is a newspaper "News" reported that Moscow will not cancel the visa regime with Turkey. Negotiations on the introduction of a visa-free regime for Turkish citizens will be frozen, a source in Russian foreign policy circles told the publication.

“Turkey needs to continue serious work to ensure the safety of those arriving in the country and provide guarantees of thorough verification of those who plan to visit Russia. In connection with the recent tragic events, as well as a number of incidents that occurred this year, Moscow is not yet ready to provide visa-free entry for Turkish citizens, ”a source told Izvestia.

“I think that every person who goes to Turkey should seriously think about it before doing this, because the attacks occur almost every day,” says the publication of the statement by the Deputy Foreign Minister Oleg Syromolotov. - The tragedy in Ankara has shown that both politicians and ordinary people can become victims. The world is starting to change. If an act of terrorism had previously occurred, then it was a tragedy for months of discussion. And now there are several of them on the day, it becomes commonplace. This is the worst tragedy. ”

Recall, Andrei Karlov was shot dead in Ankara at the opening of the photo exhibition “Russia through the eyes of the Turks.” The murderer, a young police officer Mevlut Mert Altyntash, was eliminated by the police.

The continuing tension between Russia and Turkey has become one of the leading themes for major Western publications. 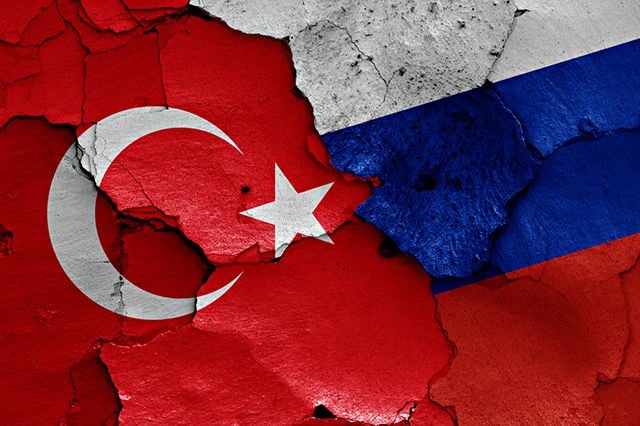 В "New York Times" An article by M. Fisher was published in which the author talks about the “new blow” inflicted on relations between Russia and Turkey. Such a blow was the murder of the Russian ambassador.

The murder of Andrei Karlov caused serious concern, the journalist said. We are talking about large-scale consequences that the whole world can feel. Other network activists no wonder "drew a parallel" with the assassination of the Archduke Franz Ferdinand, who became the threshold of the First World War. However, this does not mean that experts agree with such comparisons.

The publication notes that the shooter who killed Charles in the gallery, shouted slogans about Aleppo. It is assumed that the Syrian events, namely the rapid attack of the Assad troops with the support of Russia, was the reason for the attack.

How can this tragic episode have consequences for Turkey, Russia, Syria and the United States?

According to the analyst, the killing of the ambassador can hardly provoke a conflict between Russia and Turkey. The author finds such a turn of events “extremely unlikely,” since both Ankara and Moscow keep the situation under control and show intentions of cooperation. Moreover, Moscow and Ankara are not looking for enemies "inside." The journalist assumes that the two states "coordinate versions" and shift the blame "on common enemies" from the outside.

The source of constructive negotiations is Syria. It is there that Russia and Turkey are making efforts to harmonize strategies that were previously built on antagonism.

Experts support this view. For example. Aaron Stein, who holds an expert position in the Atlantic Council, is convinced that with regard to the Syrian crisis, Turkey needs Russia, as well as Russia needs Turkey. The murder of a diplomat could cause a crisis in relations between Moscow and Ankara, but the parties are trying to smooth out sharp corners.

Tension nonetheless exists. It is also associated with Syria, and the situation is explosive. The two states have so far been, and today are, on opposite sides: Turkey against Assad, Russia - for Assad. In November 2015, the Turkish Air Force shot down a Russian plane, thereby triggering a serious political crisis. Nevertheless, over the past year, relations between the two countries have improved. Turkey and Russia have managed to become partners again. The fact of the matter is that Ankara has narrowed its Syrian strategy, setting as its goal opposition to the groups of Syrian Kurds. The Kurds should not seize territory near the border. And such a strategy reconciled Ankara with Moscow, the author is sure. Probably, the states concluded an agreement: Turkey does not support opposition groups that threaten the interests of Russia, and Russia does not support Syrian Kurds. Mr. Stein puts it this way: Putin and Assad take Aleppo, and the militants connected with Ankara take Al-Bab to their hands.

The author believes that the shots in Ankara will not only not change the positions of Russia and Turkey in Syria, but will even strengthen the partnership ties between the two states.

That is why Turkish President Recep Tayyip Erdogan is trying to blame for organizing the assassination of the ambassador of spiritual leader Fethullah Gulen, who lives in the United States.

Andrew finkel in «The Guardian» expresses a slightly different opinion: he is confident that tensions between Russia and Turkey remain.

The assassination of the ambassador is a “provocation”, which is aimed at disrupting negotiations between Russia and Turkey on Syria. This is the opinion of Vladimir Putin. And here is R.T. Erdogan’s assessment: he stated that the attack on Karlov is “an attack on Turkey, the Turkish state and the Turkish people”.

Meanwhile, the author recalls, the 22-year-old Turkish police killer shouted “Allah Akbar!” And called for Aleppo to be remembered. The motive of it, the correspondent believes, was a thirst for revenge. “The self-styled executioner,” the author notes, expressed dissatisfaction with those many Turkish citizens who feel they are “the losing party in the Syrian civil war.”

Finkle reminds that before the assassination in Ankara and Istanbul there were demonstrations, and the entrance to the courtyard of the Russian embassy in Istanbul was surrounded by a “shield” of armored police cars for several days. Most Turks are outraged by a humanitarian catastrophe in the Syrian city of Aleppo, the author writes. Humanitarian disaster spreads across the border, hence the discontent. And it “contradicts” the official opinion, according to which Russia and Turkey will reach a new understanding and resolve the situation in Syria.

Moreover, it will not be easy for Russia to forgive Ankara for its inability to fulfill its responsibilities to ensure the safety of diplomats, the journalist said.

And this is not to mention the main differences in the Syrian war. After all, Erdogan has long supported the Sunni opposition in Syria. True, now Ankara held the "red line", saying. which does not want to give Kurdish fighters the ability to control the border area. In fact, the previous policy of Turkey in Syria has failed. And now Ankara is paying for it with millions of refugees coming to Turkey from Syria.

B. Momani in "Globe and Mail" indicates that Putin and Erdogan will not be enemies after the tragedy in Ankara: their “friendly ties” will stand the test. Now, if the murder of Charles took place in 2015, when a Russian plane was shot down, the world would probably have witnessed a historic moment "akin to the assassination of Austrian Archduke Franz Ferdinand in Sarajevo", the political outcome of which was world war.

According to the analyst, the press and Russia and Turkey will lay the blame for the murder on supporters of Gulen. Gulen himself controls them from the United States. The purpose of the attack on this version is to disrupt the rapprochement between Moscow and Ankara.

This version, by the way, has already been evaluated at the State Department. The opinion of the provocation perpetrated by Gulen and his supporters was ridiculed by John Kirby. A recording of his briefing just appeared on US State Department website.

The official representative of the State Department was asked what his opinion was about the version put forward by the Ministry of Foreign Affairs of Turkey about the murder of a Russian diplomat. We are talking about the fact that the Foreign Minister of Turkey, in a telephone conversation with the Secretary of State John Kerry, said directly: Turkey and Russia know that there are "Gulenists" behind the murder of the Russian ambassador.

Mr Kirby declined to officially comment on this telephone conversation, noting that special comments on this matter would be given later. In the meantime, "there is no specifics." However, Kirby noted that the Secretary of State, in a conversation with the Minister of Foreign Affairs, had expressed “concerns about some statements” about “American participation” or “support” of the ambassador’s murder “by tacit consent or otherwise.” According to Kirby, “this is a ludicrous claim” and “an absolutely false” statement, since “there are no grounds for it” behind it.

Regarding the involvement in the murder of the followers of Gülen, Kirby said only that an investigation was underway. Kirby does not know the motives of the killer. Therefore, let the "investigators do their work." Looking for "facts and evidence." However, any speculation about the participation of the United States is "absolutely ridiculous."

Earlier, the US Secretary of State offered Ankara and Moscow assistance in the investigation of the murder of A. Karlov.

The killing of the ambassador was a test for the partnership between Putin and Erdogan. However, the tragedy may also be the basis for rapprochement, despite the “freezing” of the abolition of the visa regime for Turkish citizens. In the end, the relevant Turkish departments must ensure the safety of diplomats.

The undoubted Islamism of a terrorist who shot at a gallery and commemorated Allah can lead anywhere: from IG (forbidden in the Russian Federation) to Fethullah Gulen living in the USA. Or there may not be any connection between the shooter and any organizations: there are plenty of mad people in the world without it.

«Historical”The points of view on the murder (parallels with 1914) are hardly consistent, since in recent months Russia and Turkey have found many common themes for rapprochement, and against such a background a provocation will remain a provocation. Moreover, Ankara and Moscow are inclined to look for a trail not internal, but external in the crime.

Thus, it is unlikely that the two states will enter a new period of tension in relations.

The opinions expressed by other emotional comrades in the network about the need to break off relations with Turkey, should also be viewed as a provocation. Thin world is better than a good quarrel. Russia is participating in the Syrian war, and to have a new enemy behind it would be the height of short-sightedness.