Diplomacy on a silver platter

December 21 2016
10
A resolution approved by the UN Security Council that provides for the deployment of international observers in the Syrian city of Aleppo is considered a compromise between Moscow and the West. Regarding Aleppo, geopolitical bargaining is underway, and Washington will not miss its own: it will calmly take what Moscow will give him on a platter. 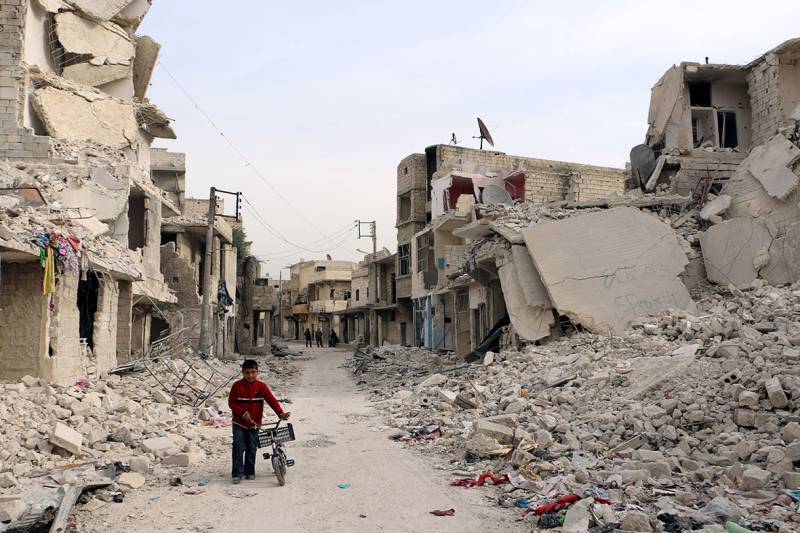 The UN Security Council adopted a resolution providing for the deployment of international observers in Aleppo. The document was supported by all fifteen member states of the Security Council. The “compromise” resolution was composed of texts proposed by France and Russia. Moscow did not agree with the original French text.

Paris offered to make the evacuation of the civilian population from Aleppo voluntary: that is, people themselves choose and decide where to go. The resolution also demanded to ensure the unimpeded and immediate access of UN monitors to the eastern quarters of Aleppo, where B. Assad’s opponents are still located.

It was this proposal that was originally submitted to the UN Security Council for consideration. However, Russia rejected it, promising to block, notes "BBC".

“What they [France] are proposing is impracticable and dangerous,” said Russia's permanent representative Vitaly Churkin.

Since 2011, Russia has already blocked six resolutions on Syria, reminds the broadcasting company.

As a result, on December 19 voting, the UN Security Council unanimously adopted the 2328 resolution on conducting international monitoring of evacuation from Aleppo, based on the projects proposed by France and Russia. The unanimous approval was preceded by a discussion of the document, which took several hours.

The basic wording of the resolution can be found at UN Russian site. We formulate them briefly.

1. The Security Council authorized the UN to observe the voluntary evacuation of civilians from the eastern regions of Aleppo. We are talking about thousands of civilians. Not only the UN, but also “other relevant institutions” will “conduct proper, neutral monitoring and direct observation of evacuation from the eastern regions of Aleppo and other areas of this city.” The resolution emphasizes that people must leave the city voluntarily; they need to be delivered “to the final destinations of their choice”.

2. Security Council members demand the protection of all civilians, including those who intend to remain in the city.

3. All parties to the conflict must immediately give humanitarian workers access to those in need. It is specifically noted that “all parties must comply with their obligations under international humanitarian law, and, in particular, respect and protect civilians and civilian objects”.

4. The UN Secretary General will take measures to enable UN and other staff members to monitor the evacuation process for compliance with international law.

5. The head of the UN must submit a report on the implementation by the parties of the resolution within five days.

An indication of the need to "respect and protect civilians and civilian objects" is clearly a hint of Western lament about the destruction of hospitals and houses by some Russian forces, and at the same time the killings of civilians as a result of attacks, which the Western press wrote without adequate evidence. Along the way, in the good old propaganda tradition, Assad was called a tyrant and a despot, and Putin was portrayed as his cruel patron.

On the Russian MFA website In the evening of December 19, a comment by the Information and Press Department of the Russian Foreign Ministry appeared in connection with the adoption of the UN Security Council resolution 2328 on Syria.

As indicated in the document, the adoption of the resolution requires the UN secretariat to develop "urgent steps" that are "clearly depoliticized and professional in nature." Implementation of the decisions should be “in the interests of the civilian population of the Syrian Arab Republic”.

“We do not exclude that after the completion of the main phase of voluntary evacuation of the civilian population, there will be a need to evacuate an additional number of people who want to leave the area. In this case, it may be necessary to attract additional resources, and then the mechanism incorporated in the 2328 resolution will be in demand. ”

Thus, we note that the main proposal of France (voluntary evacuation of the civilian population from Aleppo) was approved by Russia.

The difference is revealed only one thing: Paris proposed in its resolution text to the UN Secretary General to form a monitoring mission immediately - directly from those UN employees who are already present in the area of ​​the city of Aleppo. In Russia, it was believed that the deployment of unprepared observers in the zone where the battles were going on would lead to provocations. That is the difference in "immediately."

For the rest, the “clearly depoliticized” UN document clearly smells of big politics. Actually, it cannot be otherwise. United Nations out of politics is nonsense.

Other commentary documents relating to the resolution of the Security Council on Syria, on the website of the Ministry of Foreign Affairs has not yet appeared.

The streamlined wording of the Foreign Ministry suggests that, after the noise at the UN Security Council, Russia probably changed its position. At least, about any "fundamental" changes in the text of the resolution is not reported. If there were any, the Foreign Ministry’s comment would be completely different.

What does all of this mean? Is Russia, acting in Syria, trying in any way to establish a dialogue with the West? For what purpose? Continue the operation in Syria without problems, “legitimizing” it in the eyes of the United States and Europe? This is quite possible, especially since Moscow will need such “legitimacy” when Mr. Trump becomes the president in the United States. The latter, after all, promised to fight the terrorists “IG” (forbidden in the Russian Federation) together with Moscow, defining such a fight as one of the likely points in terms of rapprochement with Russia.

Military expert Vladimir Evseev, deputy director of the Institute of CIS Countries, said in an interview BFM.ruthat Russia has changed the resolution on Aleppo so that there are no problems for ensuring security in Aleppo, and also so that there are no obstacles to the continuation of the military operation to liberate the Syrian northwest.

The expert also believes that "any presence of observers in the territory of Aleppo is always additional information that can be transferred to different parties, including those parties that the Syrian National Army is fighting against." Therefore, the presence of observers "is more a necessary measure." Such a measure is approved by Russia in order to "remove the excess, excessive suspicions that were expressed by the Russian Federation about the fact that hospitals and schools are being destroyed in Aleppo, that there are facts of mass genocide." So Moscow is trying to remove the "excessive pressure", demonstrating a "willingness to dialogue."

“If all countries - permanent members, non-permanent members of the Security Council - are ready to support the resolution, then Russia cannot be left in splendid isolation,” said expert BFM.ru. “Especially since then Russia would be subjected to further demonization for this position.” She is already under fire from fierce criticism for the fact that her actions led to a humanitarian catastrophe and that Russia opposes humanitarian interventions and things like that ... "

There is also an opinion that the United States is trying to “cling” to the victory in Aleppo through a resolution.

“Russia managed to prove that there were Western military advisers in Aleppo who were directing the actions of the militants, and now this situation is used for bargaining at all platforms, including the UN,” said "Free Press" Deputy Director of the Tavrichesky Information and Analytical Center of RISI Sergey Ermakov. - And the main bargaining, of course, comes with the new US administration. This administration, of course, has not yet officially entered into power. Nevertheless, Moscow is already interacting with it and bargaining about the conditions for revising Russian-American relations. ”

The expert believes that Syria occupies an important place in this bargaining, despite some failures of the Syrian government troops operating with the support of Russia, for example, the surrender of Palmyra. The situation today is “far from the common victory of Bashar Assad,” and yet the military successes are evident. "In this situation, the United States wants to cling to our successes, blame all the failures on the administration of Barack Obama, and since January 2017, build relations with Russia in a new way," the expert is sure. As for Moscow, it doesn’t mind that the Americans ... stick in. " After all, Moscow initially proposed "to unite efforts in Syria with the West, and not to organize coalition competitions." “Now this competition is not in favor of a coalition led by the United States, and Moscow wants to take advantage of this,” added Yermakov.

This is also interpreted by another analyst. “We in the resolution made a concession to the West, and especially the United States,” said Mikhail Alexandrov, leading expert of the Center for Military-Political Research at MGIMO, told SP. “Most likely, we did it in order to play along with the elected US President Donald Trump ... Apparently, Moscow does not want to aggravate the situation and give extra trumps to Trump's opponents.”

As for the assignment, this assignment lies in the very essence of the resolution, the expert is convinced. “The West wants to maintain its influence on the situation around Aleppo and Syria as a whole, and the resolution allows it to conduct international observation in Aleppo, make assessments of the behavior of the Syrian authorities and Russian videoconferencing, try to limit the activity of the counterterrorist operation,” the commentator notes.

As a result, the expert finds the resolution approved by the Kremlin’s geopolitical error. "Most of all, the presence of observers, of course, podgadit Syrians," he says. “By the way, it’s not at all clear why the authors of the resolution didn’t ask their opinions ...” In addition, the UN document “plays against the interests of Russia,” since observers will make verdicts in the style of “this is not so, it’s not that”, and Russia will have to be guilty party, to justify and prove something. " “In my opinion,” the expert concludes, “we shouldn’t have taken this resolution at all.” “We went for it, I repeat, in the interests of big geopolitics, playing up to Trump’s camp. But this line, I think, is erroneous, ”Alexandrov believes.

In general, it is difficult to disagree with the expert opinion. Playing on Trump, who hasn't even taken the Oval Office yet, is in itself a concession, even a peculiar foreign policy form, which Russia presents as a future American ruler on a platter. Here, they say, we won here, but without you we can. Mr. Trump and his advisors should like this blue-colored saucer.

Nevertheless, the Russian Foreign Ministry can be understood. If there is any chance at all to improve relations with the West through jointly settling the situation in Syria, this chance should be used. It is impossible, of course, not to notice that Moscow every time brings excessive trust in Western "partners." However, in times of low oil prices and Western bargaining sanctions from a position of strength, the Kremlin cannot count.