December 19 2016
3
A detachment of ships as part of the anti-submarine ship Admiral Tributs and the sea tanker Boris Butoma left the port of Visakhapatnam in the Bay of Bengal to participate in the exercise INDRA NEVI-2016, reports RIA News message press service BBO. 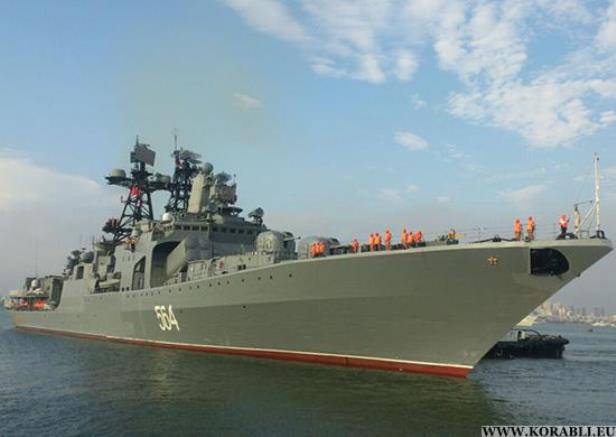 “The active phase of the exercise will take place from 19 to 21 December in the waters of the Bay of Bengal. During it, the crews of the participating ships will conduct communications training, work out episodes of repelling air attack weapons, joint maneuvering ships as part of tactical groups, artillery firing at sea and air targets, elements of anti-submarine defense and restocking on the move, ”the release said.

It is noted that “during the coastal part of the exercise from 14 to 18 in December, the delegations from both sides agreed on the procedure for conducting the stages and episodes of practical actions of forces at sea, the interaction of inspection teams, the organization of communications, security measures, the conditions of practical artillery species of marine weapons».

In addition, "the tactical battleship was carried out to fulfill the upcoming tasks, and the commanders of the ships were briefed on security measures."

Before going out to sea, the Russian crews "inspected the sights of the Indian port and took part in competitions in football, volleyball and rope pulling," the press service added.