Berthier rifle - a rifle for the Zouav and all the rest

December 23 2016
83
In a smoky coffee shop involuntarily sad
Above the letter to far to her.

Your heart will beat, and you will remember Paris,
And the chant of his country:
On the way, on the way, the day of fun is over, it's time to hike.
Aim at the chest, little Zouav, shout "Hurray!"
For many days, believing in miracles - Susanna is waiting.
She has blue eyes and a scarlet mouth.
The song from the movie "Red Square")

Probably many of us remember this film, made in the USSR in 1979, and, in my opinion, this is the best among all the films on this topic. Both in the first and second episodes this song sounds there, and it emphasizes that the Zouaves, that is, the French colonial troops, were staffed with low-growing soldiers. And in France, the second after England of the colonial power at the beginning of the twentieth century, this circumstance in the small arms system was taken into account, though not on purpose, but by the will of circumstances.

A French soldier with a Berthier rifle of the 1907 model of the year.

It was just that shortly after the Lebel rifle entered the French army, it became clear that this sample has a number of flaws, and the most important of them is its tubular magazine. Yes, as many as eight cartridges were placed in it, while all the other rifles had cartridges in the 5-6 stores, but ... They charged them either with a pack or a clip, but they had to be charged into the lebel one at a time! But since at that time the on-line production of this rifle was already established, it was only possible to shrug it off, because it was difficult to “construct” them in such a way, or rather, it was simply impossible to make any serious changes. Therefore, the French military showed "wisdom." Based on the massive release of Lebel rifles, start gradually putting into service another sample of the rifle, hoping that with time, gradually, the second rifle, as more advanced, will painlessly force out the first one in the army.

Cavalry carbine Berthier and clips to him.

In this connection, the process of gradual introduction of the Berthier rifle began, история which began with a cavalry rifle, developed in 1890 year. Work on the new rifle stretched ... 17 years and were completed only with the advent of the model in the 1907 year, and then this model, which was called the rifle arr. 1907 of the year, was sent to the French troops who were in the colonies, and above all, in Indochina. 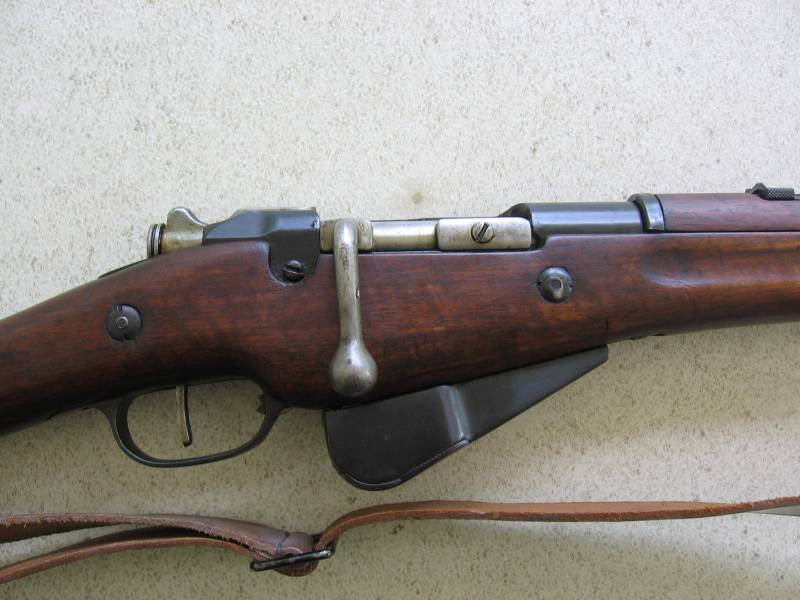 The new rifle, Berthier, was the development of his previous models and, above all, his 1890 carbine of the year. Then it turned out that if Lebel’s rifle could still be charged in infantry, then in cavalry it’s just very uncomfortable and hard, and then Emil Berthier, engineer of the Algerian Railway, offered his sample. The carbine had a Gra rifle bolt and a Mannicher rifle pack shop. The only difference was that Manlichera’s pack had “top” and “bottom” and you had to look at how “end” you shoved it into the store so that it would not get stuck. And Bertier made a pack symmetrical, but only three cartridges. However, his cavalryman liked the carbine. And above all, the fact that he had a solid wood continuous cut box, very elegantly "flowed" his shop. In addition, he had an elongated reloading handle, convenient for working in the saddle!

The rifle of the 1907 model of the year with a bayonet.

In 1902, based on it, the “colonial rifle” was adopted for the small aborigines of Asia and Africa, for whom the standard “lebel” was too long and heavy. The Berthier was shorter and lighter, and therefore more convenient for any Anamites and Malays, out of which the French, along the lines of the British, also recruited their colonial forces. In 1907, a longer “Senegalese version” appeared for much more tall Senegalese blacks, but also with a three-round magazine, so that, having rebelled, they would not have a fire advantage over the metropolitan forces! 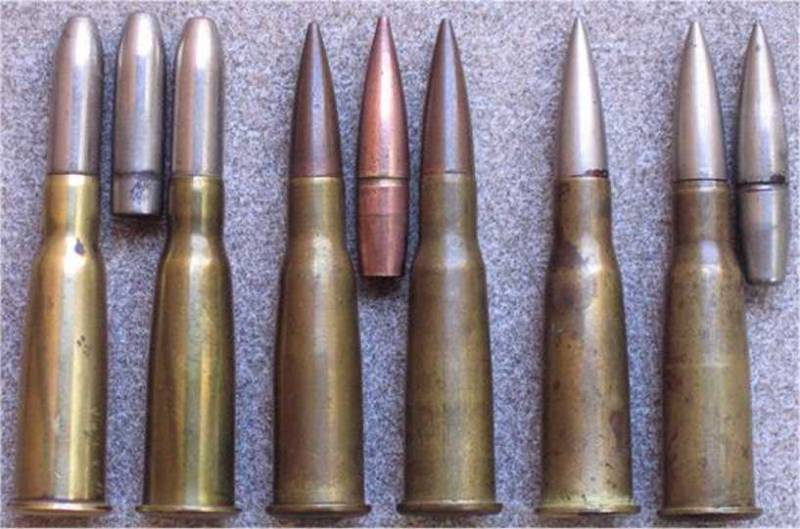 The situation changed dramatically in 1915, when the strength of the French army increased so much that stocks weapons she was missed. The production of Berthier’s rifles was then dramatically increased, an order was placed on it in the United States at the Remington factory, and it gradually began to force out obsolete samples. The new model was called the rifle arr. 1907 / 15 of the year. Soon it began to arrive at the front in such quantities that it became by mass the main weapon of the French infantry, and was used not only in World War I, but also remained in service until the 1940 year.

A pack of three rounds (left) and five (right).

Initially, it kept the store for three rounds, but this number of rounds compared with the German “Mouser” was not enough. Then the store was lengthened so that a five-charge pack would fit into it. This modification of the rifle went into production as a rifle arr. 1916 of the year. Her shop protruded from the lodge, which was very inconvenient, since it was here that her center of gravity was located. 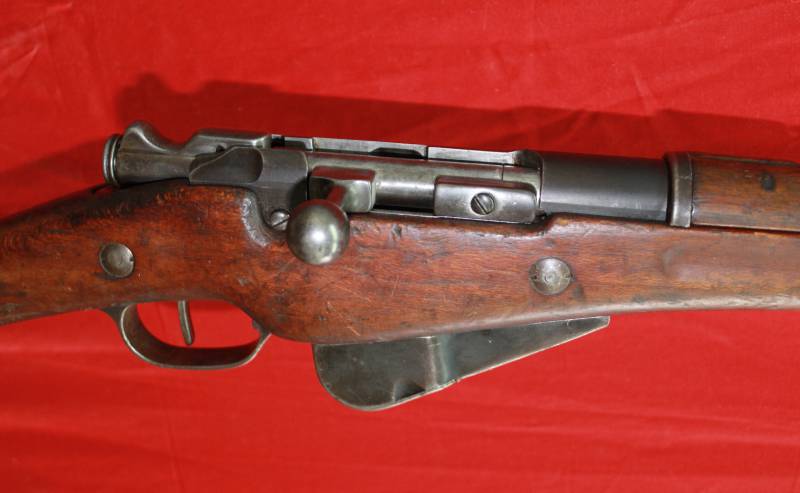 That’s how the shutter looked like on Berthier’s rifle. As you can see, in the infantry rifle, the bolt handle was short and did not turn down. 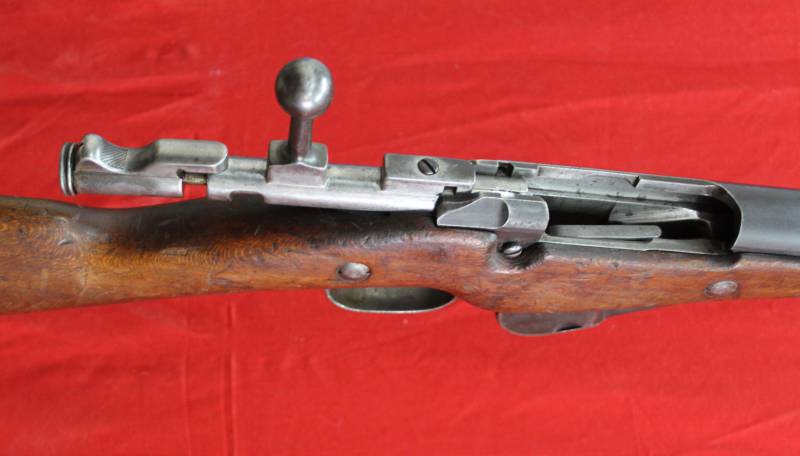 The shutter is open. The feed lever is clearly visible.

See the screw heads? Neither the rifle itself, nor its bolt can not be disassembled without a screwdriver, which, however, was a characteristic feature of the weapons of that time.

Rifles arr. 1907 / 15 and 1916 quickly gained popularity in the army: true, they were too long for melee in the trenches, but with a long T-profile bayonet were indispensable in a bayonet attack, they were also convenient to shoot, and the soldiers usually preferred them old Lebel rifles. These rifles arr. 1907 / 15 of the year were produced simply in huge quantities. Moreover, although they were released from Remington in the United States, all this production was sent only to the French army. Not a single rifle "went to the side." At the end of the war, its service continued until the 1934 year, when it occurred to the French to remake a rifle for a new 7,5-mm cartridge, designed specifically for light machine guns. The new rifle received not only a new barrel, but also a five-charge double-row Mauser shop and received the designation 1907 / 15 M34 rifle. However, the process of changing trunks was very slow. So slowly that by May 1940, only an insignificant part of the existing rifles was remade to fit the new caliber, which only complicated the supply of troops with ammunition. 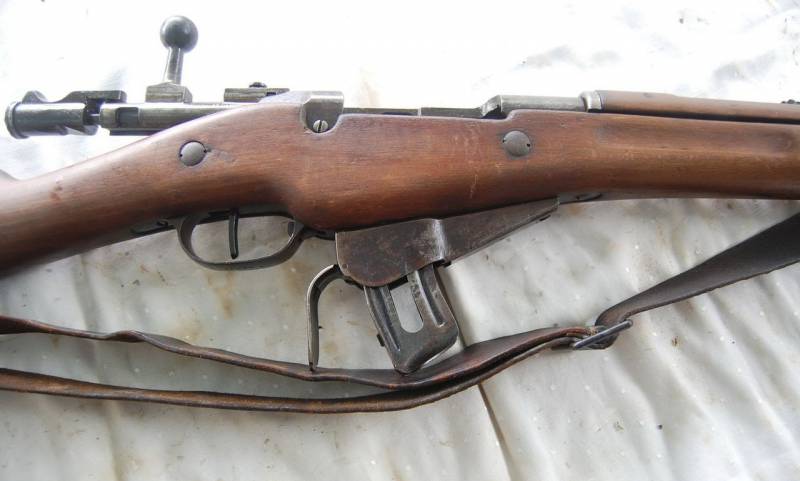 And here so the empty pack fell out of shop. 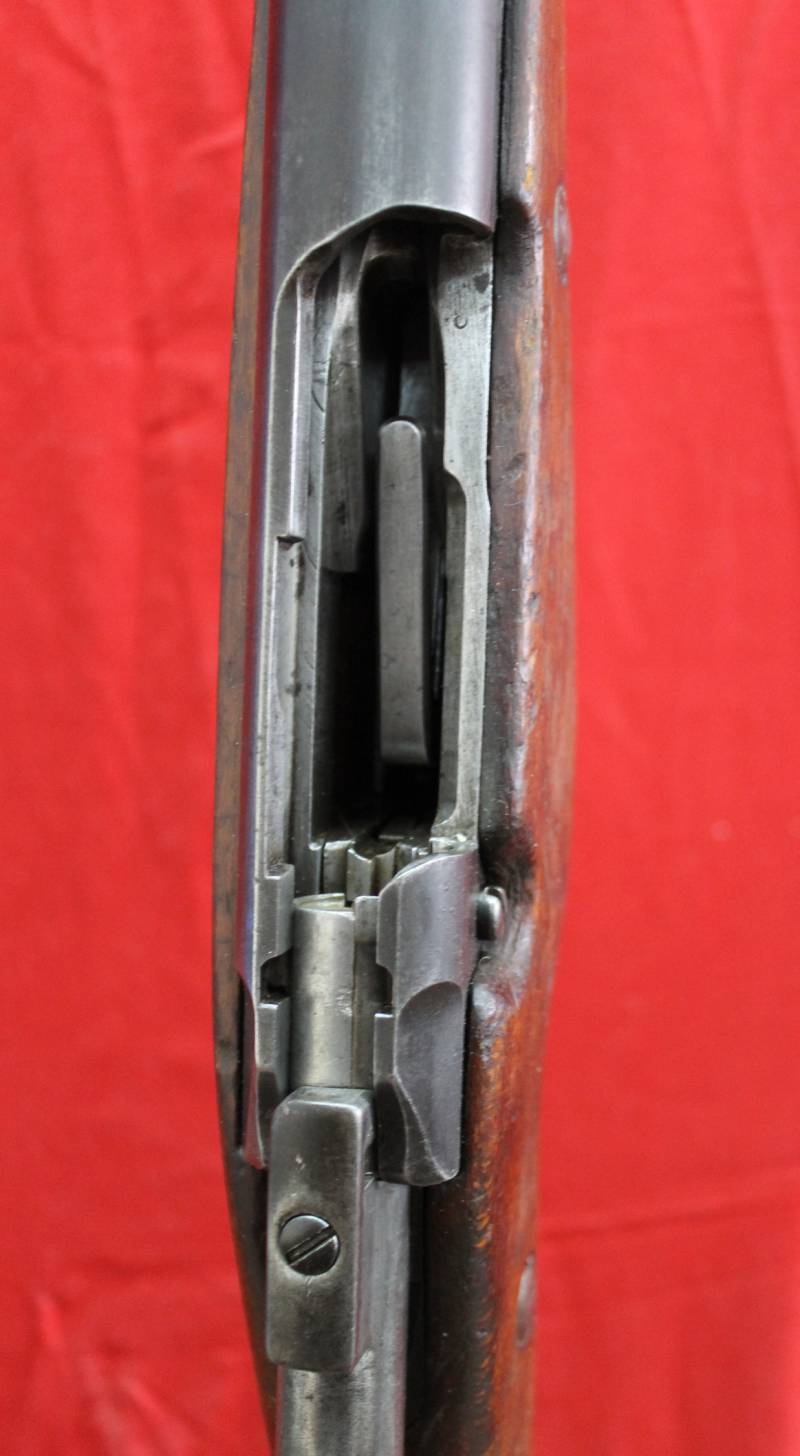 Inside the receiver there were many different protrusions, which required complex operations on their processing on milling machines.

After the capitulation of France in June 1940, the Germans got an extremely large number of very different French rifles. They began to use some of them to arm their rear units, but most of them were sent for storage in arsenals (but in 1945, they began to arm the Volkssturm and other similar formations). In addition, on the territory of the USSR they were armed with policemen, giving each of them two clips. Somehow he turned out to be armed, however, there was no sense to run to the partisans with such a “weapon”. 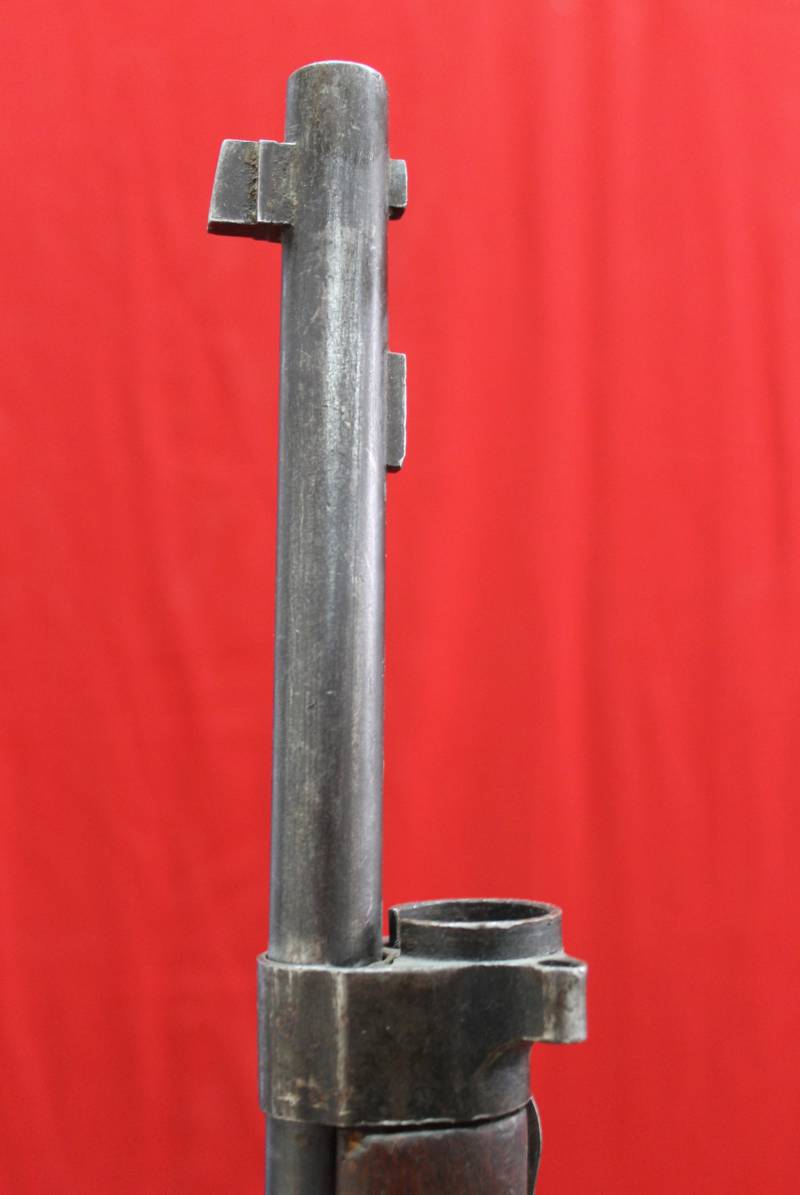 On the rifle that fell into my hands, this “thorn with a cap” was broken off. But he had to look like that. 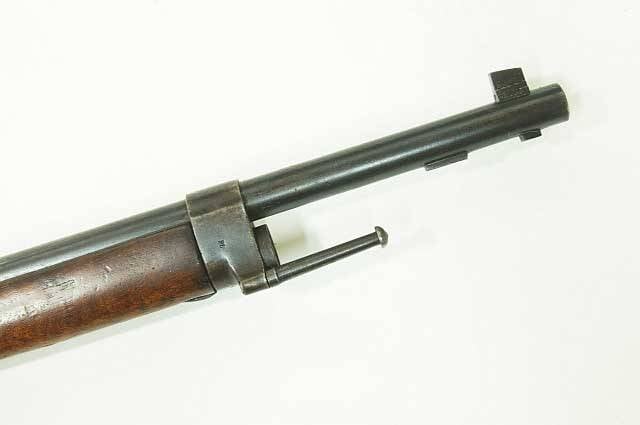 It seems that this detail was used for setting rifles in goats. However, it was possible to shoot from it without this detail.

Undoubtedly, the Germans, famous for their thoroughness, were far from delighted with the need to systematize all these trophies, but in the conditions of a total war, they had to arm not only their troops, but also their satellites. That is why the captured French rifles were useful and gradually spread almost throughout Europe. They were armed with Vichy troops and collaborator units, in particular the Charlemagne battalion. Well, today these old French rifles can be seen in museums and in private collections. 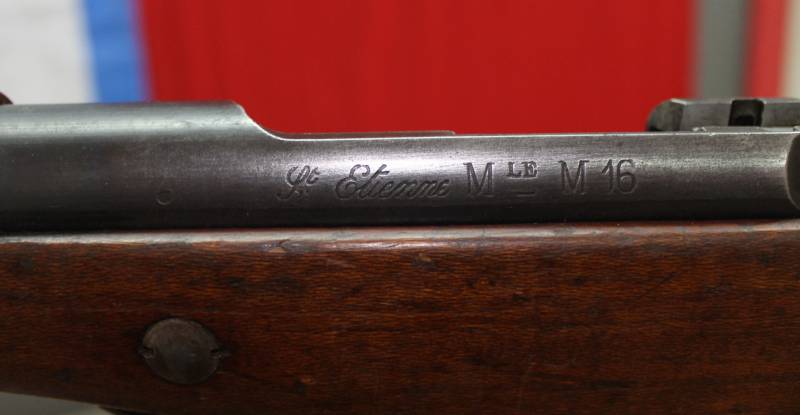 As for the design of this type of small arms, it is a typical representative of the French arms school of the end of the XIX century. Rifle length obr.1916 year 1306 mm, barrel length - 803 mm. Weight - 4,19 kg. Caliber: 8-mm, cartridge with rant case and bullet of tampak alloy. The straight neck of the butt was convenient for holding it in a bayonet attack. But in the hands of the rifle seems heavy and too long even for the modern man. Fuse, for the sake of simplicity, the rifle did not have. Until 1915, there was no upper barrel lining on it. The bayonet had a brass handle, that is, it was also a difficult weapon. 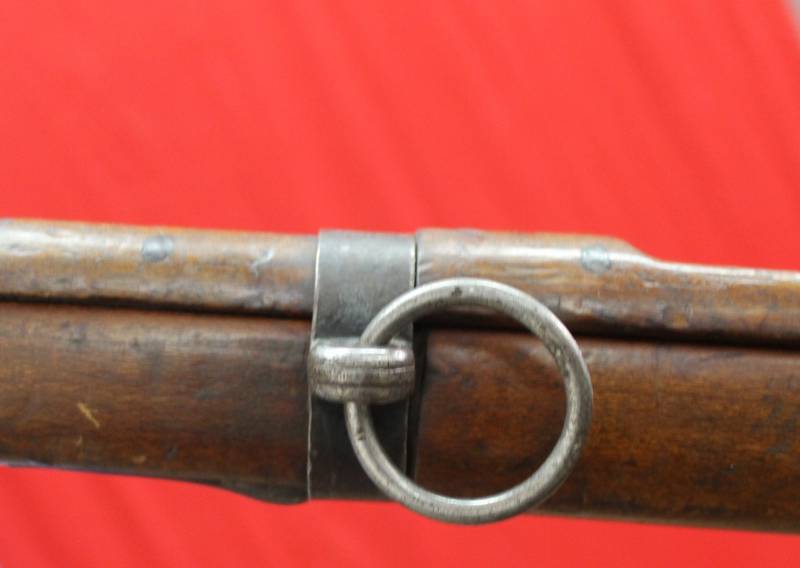 As for personal impressions, then ... it’s too long and therefore uncomfortable. And this is without a bayonet. And to shoot from it with hands with a bayonet is, probably, she will simply pull off her hands! Very inconvenient store with a lid. It was not on the carbine. Like all Mannicher rifles, there was a hole through which the pack fell out of the rifle. But then they decided to close it with an opening lid, which made it even more inconvenient than before. How does a used pack fall out of a store if, say, it runs into the ground? That is, it was necessary to constantly remember. 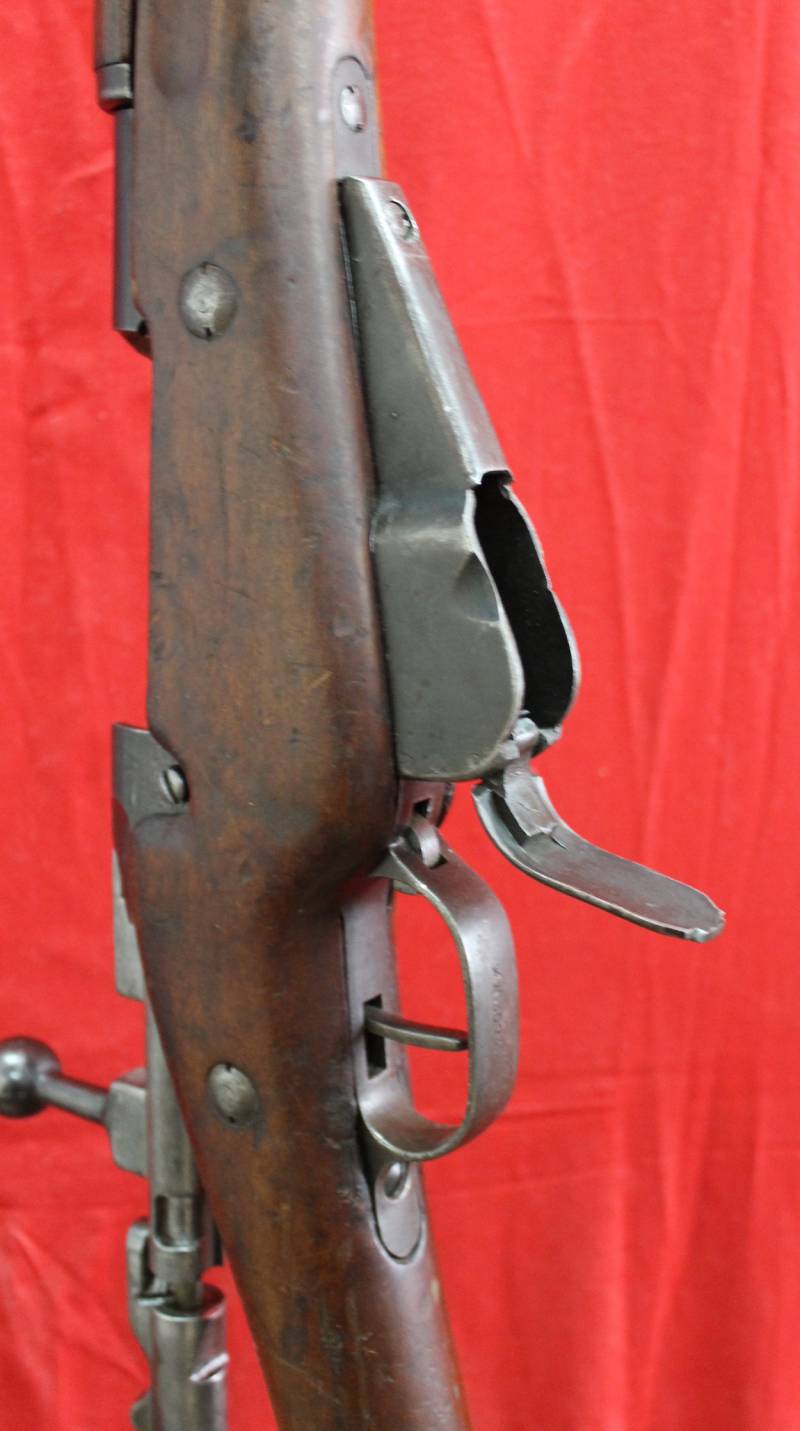 Shop cover is open. It was through this hole that the spent tutu fell out. Finger slots are visible on the side of the store to make it easy to open the lid!