Yury Boldyrev about Swiss-Qatari friends, Rosneft and Syrian Palmyra surrendered to the enemy 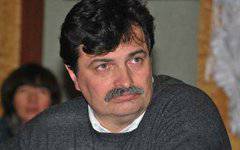 We had 90-e - dashing. Then the privatization was wrong, shameful, anti-people and treacherous. Now is another matter.

Now the “largest privatization deal in the oil and gas complex” - the sale of another 19,5 percent of Rosneft shares to foreign companies is a matter of national pride. This is supposedly a “breakthrough of the sanctions blockade”. Yes, plus almost saving the budget.

True, when was this privatization planned?

That's right - back in the 2010 year. That is, long before any sanctions blockade and problems with the budget.

Yes, it is curious: if there were no sanctions or problems with the budget, then what would the “patriots” in the service of the oligarchy justify the vital necessity of this next (I repeat, long-planned) refusal of the authorities of the part of the hen that carried the country golden eggs?

It is believed that our domestic policy is lame, but foreign policy is a complete delight. Well, taking into account the actual participation of the country in hostilities, I try to criticize in this part of the government rarely and minimally, not to push it. But there are special situations.

More than half a century ago there was such a war - the Korean. It went on the territory of Korea, but in fact there were opposed by the United States, on the one hand, and the USSR and China, on the other. So was it possible to imagine that the United States would then take and even sell part of some of its strategic companies to the USSR or China?

Say absurdity - it does not happen?

With respect to self-respecting states, indeed, does not happen.

But compare: in Syria there is a war. Russia is absolutely officially on the side of the legitimate and legitimate government. And on the sides opposing: on some (sort of, “moderate” murderers) - practically the whole of the West, on others (ISIS *, etc.), even if informally (we were also informal in the Korean war), less, it seems, of the monarchy of the Persian Gulf, almost led by Qatar.

Moreover, it is with Qatar that we have a historically “special relationship”. Is it possible to cite as an example at least one more country that would allow itself in our most recent stories put our ambassador face in the asphalt?

And now: this very “dear friend” has now been honored with the high part of becoming a shareholder, sort of like our strategic company itself.

“Patriots” in the service, of course, instantly found an explanation: they say, we almost outbid the enemy. Like: "funding for militants from Qatar decreases."

And what else does our strategic need give them in order for this financing to stop altogether? This is the first.

Secondly, it seems to me, this is the case when we did not buy it, but rather, it is us - at least, a part of our “national wealth”.

Thirdly, how would the events on the Syrian front develop at all if it were not for this brilliant course of our authorities? Then the militants would have taken not only Palmyra, but again Aleppo, and even Damascus? So what?

But, attention: I am not talking about military actions and not about heroes who give their lives for our country, even if beyond its borders. I am completely about something else - about foreign policy (the one that we have is sheer delight): about selling a part of a strategic asset to obviously unfriendly hands, but with a pomp given to us as the greatest victory. About that very foreign policy, as a result of which not only the West, but even small Qatar (by the forces funded by them in Syria - as our state television channels told us about) have the opportunity, forgive, to wipe our country's legs.

Who cares who the owner?

And a little, excuse me, educational program - for understanding the essence of our current great victories on the privatization front.

The question is: is there any difference to whom our mining companies belong: to us or to foreigners?

The difference is obvious - it will answer everyone (although they will mean different things). Less obvious is the most significant: the difference depends on the conditions in which the country is located.

So, if a country did not voluntarily limit its own sovereignty in part, for example, tax and customs regulation, then, strictly speaking, the owner, no matter who it is, is easy to force, literally, to walk on the string and, ultimately, act strictly national interests. Up to the obligation to invest the bulk of profits in development in our own territory. And up to the right of the state to deprive the company of all licenses for the development of deposits in violation of the legal requirements imposed by the state. After all, the value is not Rosneft or Gazprom themselves, but the so-called “reserves on the balance sheet” are the rights to develop certain deposits. Give these rights from Rosneft, for example, again the same Baikalfinansgrupp, and now the last one is the greatest corporation, and Rosneft is a dummy.

If the country has limited its own sovereignty in terms of customs regulation, for example, by joining the WTO, then present the necessary requirements to the owner of the mining company and, if these requirements are not met, deprive the mining company of licenses and create conditions for the owner to benefit to act in our interests (he simply has no other way then), it becomes much more difficult.

What is national control for?

What requirements the state has the right to make, and which of these requirements are vital for us, the key ones? The main thing for us is a reversal of the entire natural resource complex for a guaranteed long-term (for decades) order to our domestic engineering industry.

In what way can this requirement be ensured in a country that has not limited its sovereignty?

For example, by introducing long-term - for decades ahead - prohibitive duties on the import of foreign equipment for oil and gas production, processing and transportation. In other words, the creation of a powerful long-term protection for the development of its engineering. With simultaneous significant tax and customs benefits to everyone who will create plants in our territory for the production of all this in our country.

But this path is closed to us by ratification of the WTO accession agreement in 2012.

Is there any other way?

There is. More precisely, was.

For example, in Norway, in the period of raising its engineering industry, a national company that was not subject to privatization was responsible for sending orders for engineering products.

It would seem that this path remained open for us? But the plans and the implementation, as we see in the recent example of Rosneft, the program of privatization of key oil and gas assets threatens us to block this possibility.

When the tail drives the dog

The head of Rosneft reported to the head of state about the results of the transaction for the sale of a stake in Rosneft - is nothing disturbing?

Well, then we will try to find a suitable analogy.

For example: you (the owner) are selling the car, and here the car reports to you about the results of the transaction at the buyer's choice, but that also underpays you the amount that you originally intended to help out. This situation will not jarring you? If your car turns out to be able to choose a buyer for itself, would you suspect that she chose him, guided not so much by your own, as by her own interests? In such a situation, will you trust the negotiations and the decision to the object of sale (whose interests may not coincide with yours), or would you prefer to entrust this to another person who represents, first of all, but preferably and exclusively your interests?

We'll have to go back to the “dashing 90” and recall one important story described as early as 2003 in my book “About barrels of honey and fly in the ointment.” There is a report of the Accounts Chamber of the Russian Federation (directly behind my signature) on the results of the analysis of the agreement on transferring the state-owned stake in Gazprom to trust management. To whom? Gazprom itself. Yes, and with the payment to Gazprom for the "great work" of managing the state-owned stake in Gazprom, a lot of money. Is this clear? This is about as if, for example, the audit commission would transfer its powers to the controlled, and even pay him money for it - as for the great work that he controls himself. It is clear that our report contained an urgent proposal to categorically stop this practice.

It would seem that the very possibility of this is absurd?

But what has changed now?

Now the state-owned stake of Rosneft does not even control, but on behalf of the state, Rosneftegaz, which is headed by the same head of Rosneft, owns. It is necessary to understand: the first half day is led by Rosneft, the second half day is strictly and uncompromisingly controlling its own work. On our behalf.

Why is the budget so poor?

But why? Why so hard? Why does not the Rosneft state-owned stake not directly managed by the Government (as prescribed by the Constitution) and its subdivision — the committee or fund for property management? It would seem that they were created for this purpose in due time, for which they were needed?

The answer is obvious. If the state-owned stake in Rosneft is managed by the government (as is required by the Constitution) or its core division, what happens to the company's profit (the state-owned share)? It automatically goes into the budget - all 100%. Want to invest in something? Please, but, firstly, as part of a public budget discussion procedure. Secondly, exclusively jointly and in proportion with other co-owners. Or with the redistribution of ownership shares, taking into account the additional investments made.

And even if not management, but the state shareholding of Rosneft itself was handed over to the intermediary represented by Rosneftegaz? That's when Rosneftegaz, as a business entity, decides what to send the profit from the state-owned stake in Rosneft. Moreover, unlike Rosneft, this Rosneftegaz is not a public company, its shares belong only to the state, are not listed on the market, and therefore, in our conditions, its commercial activity can be covered by the deepest veil of “trade secret”. Accordingly, the state budget is only what Rosneftegaz will show as its profit. Or even simpler: you can simply transfer only a percentage of 50, or even 25, from the profit attributable to the state-owned stake in Rosneft. In general, the scope for "creativity" ...

So what's the difference with dashing 90?

It may be only in the fact that now there is no truly independent Accounts Chamber (as well as a generally independent parliament) and, accordingly, to raise publicly and officially the question of an obvious conflict of interests and the inadmissibility of such "management" on behalf of the state by state property, as well as the barrier to such a privatization of a strategic asset in the hands of the Swiss-Qatari "friends", no one.

And how, with such a cunning and hypocritical system of government (yes, it seems, and goal-setting), which, being so organized, in principle can not work in the interests of the country, we are going to compete with the outside world?

* “Islamic State” (ISIS, IG) by the decision of the Supreme Court of the Russian Federation from December 29 of 2014 was recognized as a terrorist organization, its activity in Russia is prohibited.