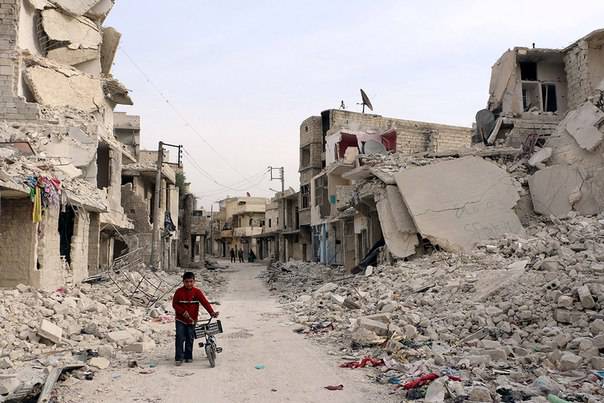 A few hours remain until the final liberation of the Syrian Aleppo from the militants of terrorist organizations. The total area of ​​the city’s quarters, where extremists remain, does not exceed three square kilometers, which means that government forces control 98 percent of its territory.

It is noteworthy that, in addition to the SAR army, diplomats from Western countries prepared for the final spurt, who until the last moment expect to render their wards from among the militants of moderate and, as practice shows, not very moderate opposition, feasible from high international tribunes. The methods, however, were chosen as banal, and therefore the hopes of the thugs for salvation fade as the Syrian military moves toward the grateful residents.

So, today, French Foreign Minister Jean-Marc Eyreau called on the UN "to immediately use all mechanisms to shed light on what is happening in Aleppo," and the day before US State Department spokesman John Kirby stated that the American leadership was disappointed by Russia's position, which had abandoned its ceasefire plan eastern neighborhoods of the city.

It is worth saying that the approaches of some Western partners to the settlement of the Syrian conflict are sometimes genuinely surprising. If you put together the latest statements of the top military-political leadership of countries belonging to the antiterrorist coalition, you get something like the following: “Bloody Damascus and Moscow, we recognize that the militants we support, despite repeated attempts to defend their interests at the highest level, have suffered a defeat ; we are also forced to state that our attempts to somehow separate the moderate opposition from outright terrorists were not crowned with success. While the tyrant Assad, together with the Russian military, was destroying civilians with the delivery of humanitarian supplies, we continued to provide our wards with all possible assistance, as evidenced by the ammunition and missiles discovered in one of the NATO countries discovered on the eve. At the same time, we are aware of the strategic importance of the battle for Aleppo and its influence on the further outcome of the war, and therefore we demand to conclude an armistice with aspiring Islamic radicals who control three square kilometers of the city. ”

Obviously, none other than the Nobel Peace Prize laureate and part-time US President Barack Obama, who lifted the ban on the supply of weapons to Syrian rebels, should sign such an appeal. By coincidence (and perhaps not accidental), this step coincided with the start of the counter-offensive of the Islamic State militants (the organization’s activities are prohibited in Russia) against Palmyra, which was freed by the SAR army in March of this year . If we consider that the so-called opposition is fighting against Syrian President Bashar Al-Assad, while many groups of fighters with the regime are closely linked with terrorist groups, we can assume that the outgoing White House administration is just preparing another hotbed of tension for the new head of the Oval Office what to do at your leisure.