December 14 2016
114
In the near future, the Russian army will have to receive new weapons, which differ from the existing analogues with enhanced combat and technical characteristics. After a long process of development and refinement, as well as after several years of comprehensive testing for armaments, it is planned to adopt the newest domestic automatic grenade launcher "Balkan". As reported by the media, the appropriate order of the leadership of the military department should appear as early as next year.


About the early adoption of the products of the AGS-40 "Balkan" (GRAU index - 6Г27) December 9 reported "Rossiyskaya Gazeta". Information about existing plans was obtained by this edition from the press service of the research and production concern “Engineering Technologies”, which includes the organization-developer of a grenade launcher. In addition to information about the upcoming adoption of the concern, the manufacturer revealed some details of the latest work in the framework of the project "Balkan". According to official data, a new type of grenade launcher has already passed state tests, the results of which were recommended for use.

Completion of state tests allowed the customer and the manufacturer to begin a new phase of work. To date, the first production batch of automatic grenade launchers was manufactured, which were soon transferred to the army with the aim of starting operation. In the course of the latter, it is planned to gain some experience, which will allow to continue using the new weapons. According to the results of the current military operation, the issue of the adoption of weapons for armament will be finally resolved. The appearance of the relevant order is expected in the next 2017 year. 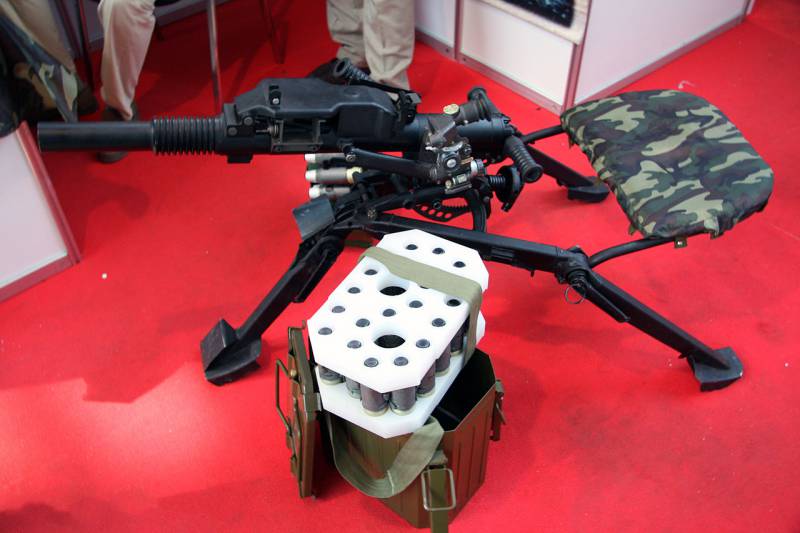 Grenade launcher "Balkan" on a regular machine and a container of ammunition. Photo of Wikimedia Commons

The new automatic grenade launcher AGS-40 "Balkan" is intended to replace existing products of its class, such as AGS-17 "Flame" and AGS-30. In the new project, some ideas and solutions were used to improve the basic technical and combat characteristics. The successful implementation of several important technical proposals allowed us to obtain a noticeable increase in the basic characteristics and, as a result, to achieve superiority over existing analogues of domestic production. The new “Balkan” differs from the grenade launchers available in the army, first of all, by the increased firing range and increased grenade power.

It should be noted that the current trial military operation and the expected adoption for service were expected a long time ago, but they are only happening now. For various reasons, the development of the Balkan project was seriously delayed in its time. The tests, the result of which was to be the adoption of weapons for service, were also not fast. As a result, the Russian armed forces will have to receive advanced weapons with improved parameters much later than they could. Nevertheless, the existing state of affairs can be a reason for optimism: despite all the difficulties, the new project has almost reached the start of full-fledged weapon exploitation in the army.

According to known data, the start of the project with the code "Balkan" was given in the nineties of the last century. The project was developed by employees of the Central Design and Research Bureau of Sports and Hunting Weapons (TsKIB SOO, Tula) V.N. Telesh, Yu.P. Galkin and Yu.V. Lebedev. The new grenade launcher was created on the basis of the experimental product TKB-0134 "Goat", created in the eighties. Due to the difficult economic situation in the country, the development of the Balkan project was seriously delayed, which did not allow for the quick completion of work and the rearmament of the army. In the future, the project was completed, with the last stages being carried out by the specialists of SNPP “Pribor” (now part of the Tekhmash concern). This organization is currently responsible for the supply of finished products.

The basis of the project AGS-40 / 6-27 "Balkan" were several basic ideas. Thus, the existing 30-mm grenade launchers AGS-17 and AGS-30 previously expressed claims regarding the lack of power of ammunition and a relatively short firing range. The new project proposed to improve these characteristics by using a shot of an enlarged caliber: 40 mm against the “old” 30 mm. In addition, it was decided to abandon the use of a separate liner, combining it with the projectile to be thrown, which allowed us to improve the weights of the entire complex.

The new ideas used in the Balkan project allowed, to a certain extent, to simplify the design of the grenade launcher in comparison with the previous systems of domestic development. Thus, the body of the 6-X27 grenade launcher consists of a barrel with a length of 400 mm, as well as a receiver. The main part of the latter has a tubular structure, and next to the breech bore is an enlarged casing of the system for supplying shots to the barrel. All the basic mechanisms of weapons are located inside the box and casing. In the back of the receiver placed handles fire control, equipped with a trigger. On the right surface of the weapon there is a swinging lever for reloading, connected to the main automation devices.

Inside the receiver grenade placed bolt group and the reciprocating spring. The weapon is equipped with a rotating bolt on which the movable drummer is mounted. The shot is made from the open shutter. For reloading weapons using the energy of powder gases acting on the drummer. Separate gas chambers and pistons, which are the standard for vapor-controlled automatics, are not used in the Balkan project.

Especially for the AGS-40 grenade launcher, an 40-mm 7P39 shot was developed. From the existing ammunition for automatic grenade launchers like VOG-17A / 7P36 (30x29 mm), a new type of shot differs in caliber increased to 40 mm, as well as a different design. To simplify the operation of weapons, as well as to improve some of the characteristics, it was decided to equip the new ammunition with a “departing” shell. The propellant charge is placed in a separate volume of ammunition, not separated from the projectile and remaining in its place during the shot.

Grenade 7P39 has a cylindrical body with a conical head, on which is placed the socket for the installation of the fuse. The main part of the body is given under the location of the explosive charge. In the tail part of the body there is a small non-detachable sleeve in which the propellant charge is located. The bottom of the sleeve has a central hole for installation of the cap. On the sides of it in the bottom there are four large windows for the release of powder gases, covered by bursting membranes.

The ammunition system uses loose metal tapes on 20 shots. The tape is fed into the receiver on the right, empty links are thrown to the left. The proposed supply of ammunition in special closures on two curb tapes. Before shooting, the tape is placed in a special round box, suspended from a grenade launcher.

7P39 shot in the section and its bottom part. Photo Modernfirearms.net

For use with the Balkan product, a tripod machine is proposed, which is a modified version of the SAG-17 machine for the AGS-17 grenade launcher. The most noticeable difference in the modified machine is the seat for the shooter mounted on the rear supports. Also used some other improvements. The tripod design provides horizontal and vertical guidance of the weapon, as well as fixation in the desired position.

The use of non-standard ammunition led to the formation of an unusual way of operating automation. Before the shot, the slide group is located inside the tubular receiver and is fixed by the sear. When you press the trigger, the bolt group is released and moves forward with the aid of a return spring. At the same time, the shutter produces filing of a shot into the flank of the barrel, after which it rotates around the longitudinal axis, performing locking. After locking the barrel, the slide frame and the drummer continue to move, which leads to hitting the primer of the shot and igniting the propellant charge in the sleeve.

Powder gases push the 7P39 shot through the barrel and send it in the direction of the target. Gases expire from the sleeve through the corresponding holes in the bottom. Due to this, the integrated sleeve flies out of the barrel together with a grenade, greatly simplifying the process of preparing for a new shot. Simultaneously, the powder gases act on the drummer, performing the functions of the gas piston. Under the pressure of gases, he begins to go back, moving the bolt carrier. The latter interacts with the bolt and turns it, unlocking the barrel. After that, the entire slide group rolls back and compresses the return spring, which allows you to make a new shot.

Used automation allows you to fire with the rate of 400 shots per minute. 400-mm barrel (relative length 10 caliber) provides acceleration of ammunition to speed 240 m / s. The maximum firing range is declared at the level of 2500. The grenade launcher with a machine weighs 32 kg. Metal box with one tape on 20 garnet - 14 kg.

As already mentioned, for some time the development of the product "Balkan" was carried out by TsKIB SOO, but later the project was handed over to SNPP Pribor. It was this enterprise that completed the required work, provided testing, and also presented a new type of weapon to the general public and specialists. In 2008, the enterprise Pribor made the first batch of six automatic grenade launchers and a number of shots for them, intended for testing in the army. The following year, the official "premiere" of a grenade launcher was held, during which the development organization for the first time revealed detailed information about the new product.

During the tests, the expected advantages over the existing domestic automatic grenade launchers were confirmed. Increasing the grenade caliber from 30 to 40 mm gave the corresponding results. So, in the detachable sleeve of ammunition of the VOG-17 family there is a powder charge, which gives the initial speed of a grenade to only 185 m / s. Due to this, the maximum firing range is 1700 m. The larger volume of the “flying away” sleeve of the 7P39 product gave an increase in the initial speed to 240 m / s and a range to 2,5 km using a barrel of similar length. Also, an enlarged caliber grenade has a large explosive charge. A two-fold increase in the effectiveness of hitting targets in comparison with AGS-17 and AGS-30.

Over the past few years, industry and the military department have jointly carried out the necessary tests of prospective weapons, as well as engaged in their improvement. All this work took a lot of time, but the required results were still achieved. According to recent reports, the AGS-40 / 6-X27 “Balkan” grenade launcher successfully passed state tests and was recommended for adoption. Now the new weapon will have to go through military operation, after which we should expect the appearance of an order for its official adoption. This event is scheduled for the next 2017 year.

About two decades have passed from the beginning of the creation of the automatic Balkan grenade launcher to the moment of its adoption for service. The project of a new weapon was launched at an inappropriate time, which negatively affected the timing of its development and refinement. However, in the future, the situation changed and the opportunity arose to complete all the necessary work. Thus, a new weapon with enhanced characteristics will soon be officially put into service, albeit with great delay.