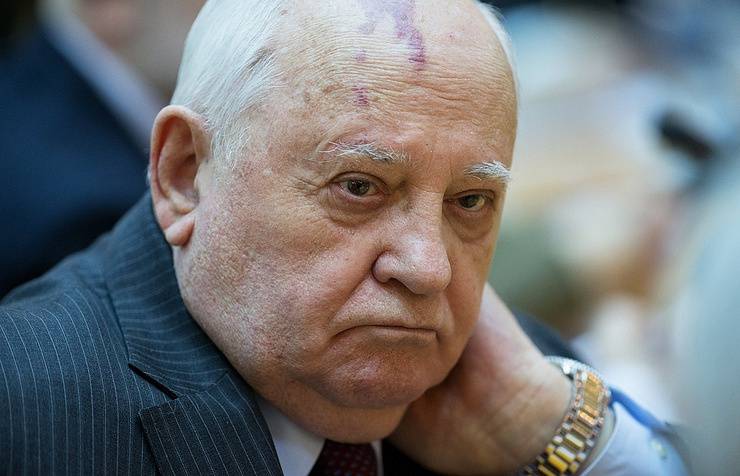 In December, the Soviet Union collapsed 1991. December 25 the first president of the USSR Mikhail Gorbachev resigned as head of state.
On the eve of the 25 anniversary of this date, the former Soviet leader, in an interview with TASS, explained why he had not arrested the document on the termination of the existence of a single country that had signed the Belovezhskaya Pushcha, and said that he admits the possibility of creating a new Union State

- Who is responsible for the collapse of the USSR?
- I do not disclaim a share of responsibility. But my conscience is clear. I defended the Union to the end. To reform, renew the Union was possible and necessary.

- At what point did something go wrong and what could be changed?
- I think that the most serious, large-scale, consequences have gone after the Emergency Committee. It was a protest of the bureaucracy. I had to break with this pack, I can not call them otherwise.

- How would you rate the role in the events of the end of 1980-x - the beginning of 1990-x of Boris Yeltsin?
- Boris Nikolayevich's mood deteriorated, he just did not understand that his role is important, but it is not in what he began to do. And he began to just fight with the Allied center. The man is very overbearing, infinitely overbearing. He was very worried and was very unhappy that he was not a member of the Politburo, hence all his protests ...
At the Plenum of the Central Committee of the CPSU, Boris Nikolayevich broke down ... (This refers to Yeltsin's 21 performance on October 1987 of the year criticizing the leadership of the CPSU and the pace of restructuring. - Approx. TASS.) He even found in our political situation that the "Gorbachev personality cult ". He was looking for such (wording) to offend members of the Central Committee, to react to him ...

I think that he is a man with great potential, but his uncontrollable desire for power ... And it manifested itself later ...
I dismissed him from the post of secretary of the Central Committee, but I remained in the Plenum of the Central Committee and left him at the ministerial level (Boris Yeltsin was appointed first deputy chairman of the USSR Gosstroi. - Tass comment). And with him it was necessary to decide ... that's all.
Everyone has to remember how he behaved, how he acted or inactive on those fateful days in December 1991. I want to remind you that the overwhelming majority of the deputies of the Supreme Soviet of Russia, including the communists, who now shout the loudest about the catastrophic consequences and blame everything on Gorbachev, voted for the approval of the Belovezhsky agreement.

- When discussing the reasons for the collapse of the USSR, it is often asked why Gorbachev did not order Boris Yeltsin, the leader of Ukraine Leonid Kravchuk, and the chairman of the Supreme Council of Belarus Stanislav Shushkevich to be arrested in the Belovezhskaya Pushcha.
- I did not know what was planned there, that they were going for such a purpose.
- That is, the special services did not report to you?
- The fact that for such a purpose - no. And I talked with Yeltsin. He stopped by and said that he was going to Belovezhskaya Pushcha at the invitation of the local, Shushkevich, that the Ukrainian president should drive up there. Well, come on, I say, talk to them, especially with Kravchuk. Ukraine must be, without it the Union is impossible.
Yeltsin also participated in the development of a new union treaty, he participated, and he has his signatures, he agreed with everything. But playing ...
- And you could not arrest them all the same?
- I think it smelled of civil war. Is it dangerous. It would seem that I sort of went to do this to retain power, although it was necessary to strive for it in a democratic way.

My credo is democracy, decisive changes in favor of democracy, the expulsion of totalitarianism, and without blood. Not by the way, without blood. Conflicts flared up on the periphery. But here we see what happens when very decisive people get down to business ...
The price of the scenario you are talking about is to arrest, save the Union in this way - I think “it would have smelled of kerosene”, such a fire would have spread across the country.
I made another - I gave power. I left myself to avoid bloodshed. And that's all. So they began to lead.

- The United States worked on the collapse of the Union?
- It’s impossible to say that they were directly involved in this, especially at the beginning ... Nobody thought that the Soviet Union could be eliminated. And then they began to help. They rubbed their hands under the table for how many years, almost a century, they were fighting with Russia, and here she was cutting herself.
- Do you think it is possible to restore the Soviet Union?
- The Soviet Union - no, and the Union - yes.
- In former borders?
- In the old borders and with the same composition, voluntarily ... I believe that there can be a new Union.