Palmyra wounded in the battles for Aleppo 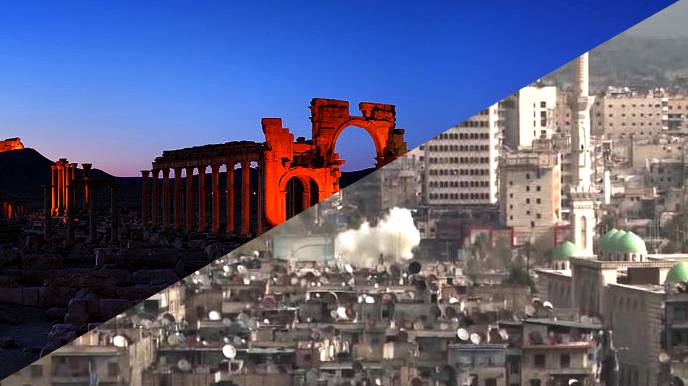 The long-awaited news of the complete liberation of Aleppo from militants comes from Syria. In the evening of December 12, the SAR army took control of the latest reinforcement of terrorists - the quarter of Firdous. On the streets of the city - jubilation. People took to the streets with Syrian flags and portraits of President Bashar Al-Assad. Rejoice for Aleppo and residents of other cities.

These people have the moral right to joy. - They suffered too much from the power of the so-called "opposition". Praised "freedom fighters" turned out to be torturers of civilianswho were covered by women and children as a shield, refused to let people out of the combat zone. If someone tried to get out of the areas seized by the bandits, the “oppositionists” fired at the escape route. In addition, they bombarded those areas of Aleppo, which were under the control of the Syrian authorities, from which almost every day there were dead and wounded.

Yes, the people of Aleppo deserved their holiday. But he was overshadowed by more than tragic news from another part of Syria. - from the province of Homs. Of those places that are known to us, former Soviet students, on the cover of the textbook stories. Alas, a photo with a Roman arch, adorned the "History of the Ancient World", will remain in memory, since the arch itself is no longer there ...

Last week, the gangs (banned in the Russian Federation) of the Islamic State of Iraq and the Levant (ISIS) terrorist organization launched an attack on ancient Palmyra. The climax came on Saturday, December 10th. Then began to receive Western media reports that Palmyra is already in the hands of ISIS. True, their joy was premature - in the evening with the help of Russian aviation the Syrian army managed to push the enemy 10 kilometers from the city. About 300 terrorists were destroyed.

But the gloomy end came the next day, December 12 ... The Islamists quickly recovered from the heavy blows and, using the self-explosions of suicide bombers, still captured the holy city.

In favor of the inhumans played the fact that the best troops of the Syrian army are involved in the liberation of Aleppo. In the conditions of the hardest urban battles in the “northern capital” of Syria, this was justified, but it does not negate the fact that Palmyra was defended by far from the most efficient soldiers. Basically, it was inexperienced militia.

It is characteristic that a fierce attack on this paradise in the desert was carried out almost simultaneously with the diplomatic battles for Syria in the international arena.

As we remember, December 5 - by the way, on the very day that two Russian nurses died in Aleppo and a pediatrician was seriously injured - a deliberately impassive draft resolution was submitted to the UN Security Council, which contained yet another unilateral "truce." Russia expected this project to be expected and naturally. China joined her. This caused a gnashing of teeth by Western politicians.

A few days later, on December 9, Canada submitted a draft anti-Russian and anti-Syrian resolution to the UN General Assembly meeting. Unfortunately, the veto right does not work there (but the resolutions, unlike those adopted by the UN Security Council, are only of an advisory nature). There were only 13 courageous countries that did not support this resolution. 36 states abstained from voting. And 122 of the member state of the GA supported the document, in which, as always, the main responsibility for the events in Syria is assigned to Damascus, and not to the terrorists.

But The General Assembly resolution demands all belligerent parties to cease hostilities, unlock settlements and provide humanitarian corridors for civilians to exit.

It is clear that behind such, at first glance, quite humane formulations stood all the same requirement for Syria and Russia - to release the militants in Aleppo from the "boiler". However, since the demand applies to all parties to the conflict, then the countries that supported the resolution should condemn all the parties for their violation, not just one.

And on the same day, the debate in the General Assembly barely subsided, a serious attempt was made to capture Palmyra. Which was repulsed, but not for long.

It is clear that ISIS did not independently decide on such a serious action. It all looks like Russia's revenge for Aleppo. For the veto on the UN Security Council resolution. And because Russia in its time, in March of the current year, freed Palmyra from igilovskiy gangsters.

Only those who encouraged the nonhumans to attack ancient Palmyra do not seem to understand what they are destroying. And they destroy the most important open-air museum. Destroy the place where Western culture is closely intertwined with Eastern. They destroy the ancient city with someone else’s hands, where European archaeologists labored at the excavations. In this way, by slapping Syria and Russia, they beat all of humanity.

Today, Palmyra wounded. Her sacred stones are again painted with the blood of the martyrs. In less than a day from the time of the seizure, the terrorists already executed 8 prisoners of Syrian soldiers and massacred a family suspected of sympathy for the legitimate authorities. The bloody "stripping" continues.

And now Palmyra herself is in captivity, subjected to torture. But she suffers for a reason. With her torment, she secured a long-awaited and, of course, very important victory in Aleppo.

One thing is clear - no honest person can feel at ease until those who are worse than the ancient barbarians rule over the wounded Palmyra. And no matter what anyone says that this is “an insignificant part of the front”, the city should be liberated. Otherwise, we will live in a world where the balance is broken.

And Gergiev will still come with a symphony orchestra and play a new concert, even if this is now perceived by some detractors with a sneer. Because the history, art and moral victory - this is what will ensure the real victory.