December 12 2016
57
National Interest magazine published its version of the ten most deadly weapons of Russia and NATO (five from each side), trying to determine which side might have an advantage. 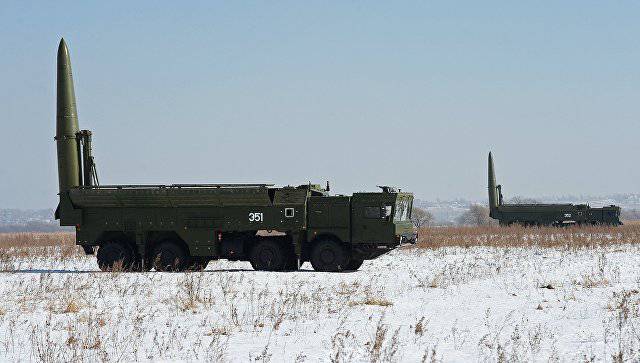 “The Alliance is coping with opponents who have outdated air defense systems and weak offensive capabilities, and do not have air force. At the same time, it is difficult to say what results the alliance will show in combat with full determination and a well-trained opponent who is armed with modern military equipment, such as Russia, ”the article cites. RIA News.

"The range of destruction of the Russian Iskander-M missile system is 400 kilometers, while the missile is capable of carrying various types of 700-kilogram warheads. The circular deviation of the rocket does not exceed five meters. Due to these properties, this system is a mortal danger for airfields, rear points and other fixed infrastructure, ”the article says.

Su-27 and its modifications.

“The size, range, speed and maneuverability of the Su-27 family make this fighter a deadly platform. Su-27 with all its appearance shows how dangerous it is, ”the author writes.

It is noted that "the airframe is well adapted to modernization", in addition, "the speed and heavy body of the fighter allow it to strike a powerful blow and then escape before it can be intercepted."

“There are several types of missiles for the C-400, and each of them is designed to hit air targets at different distances. The maximum damage range is 400 kilometers, ”the magazine said.

According to the author, "shorter-range missiles have improved capabilities for hitting fast and maneuvering targets."

The system of sensors of the complex "is considered extremely effective, especially since Russia can create defense zones using C-400 in almost any theater of military operations."

“When in the USSR the 80-90-s were built submarines of the Pike-B class, they were extremely secretive and subtle submarines. Later, Russian designers improved them with additional noise reduction technology, ”the article says.

“The most important thing is that the Pike-B boats carry an impressive arsenal of weapons, including torpedoes and cruise missiles, which are capable of hitting both sea and land targets,” writes the magazine.

“Russian special forces are an impressive military-political tool that can influence the course of the battle in all areas of military operations. SWAT is not "weapons“but it represents one of the most effective means in the Russian arsenal,” the newspaper notes.

As for the military equipment of the NATO countries, the Virginia submarine is worth noting. “It is planned that the United States will purchase nine such submarines over the next five years. In addition, the module of various combat loads of these submarines will be upgraded, which will allow to triple their strike potential, ”the author writes.

The magazine reminds that "the production of Lockheed Martin F-35 Joint Strike fighters is several years behind schedule, and the plane itself suffers from endless technical failures."

"However, over time, the F-35 has a chance to become a formidable weapon," NI believes, noting that "among the advantages of this fighter are low-profile and powerful electronic warfare systems."

“Russia has achieved considerable success in developing air defense systems, in particular, low-frequency radars capable of tracking low-profile aircraft, so the United States creates a long-range strike bomber that will threaten targets in the depths of Russian territory,” the publication said.

“The LRS-B program is completely secret, and many are protesting against it today,” but the developers promise that “the new bomber will be able to overcome even the densest air defense system.”

“The Leopard 2A7 tank will form the basis of the Bundeswehr and the armies of other NATO countries,” the magazine writes. The machine was “enhanced by an extended L55 cannon with improved characteristics that allow it to deal with heavily armored tanks the adversary. "

“Due to a shortage of tungsten ammunition, the German military doubts that its shells will be able to penetrate the armor of the last Russian tanks. The shells may not have enough kinetic energy to destroy the Russian tanks T-80, T-90, and T-14 Armata, ”the article says.

“The Boeing AH-64 Apache attack helicopter began to enter service with the NATO countries in 1986. He is able to carry on board 16 anti-tank missiles Hellfire, which is enough to destroy an entire tank company in one gulp, ”writes NI.

Summing up, the author expresses the hope that the Russian and NATO weapons he described "will be used solely as a deterrent factor."