On the "second front" in Palmyra

December 12 2016
108
Losing Aleppo, Western and Arab-monarchist ideologues of the great Middle Eastern chaos in Syria understand that they are losing the key to all of Syria. Understand that with all the cries about the “lawlessness of Russia and Assad in Aleppo”, the same Russia and Syria in the activities to eliminate gangs in the largest Syrian city will not stop. Deprived of the possibility of obtaining reinforcements, food and weapons from outside, unable to use the civilian population as a human shield on a massive scale, the militants are actually on their knees begging their main sponsors to do everything so that they can get out of the boiler in Aleppo.


It is clear as day: if we were talking only about ordinary "bearded boys" who had "nursed" themselves militarily, then the West would have nothing to do with them. But in Syria (and in Aleppo in particular), there is a frank collaboration of terrorist pawns with those external players, who are trying to add queens with their forces and bring their “order” on the Syrian chessboard.

Pawns are systematically rolled into the sand; pawns are a good mate, sponsors of pawns are a good mate, the comrades from the American, Turkish and Saudi special services, who started in the pawns, feel the skin on soft places, too ... And, given that the front in Aleppo was late time was in fact the only front on which the main forces of the Syrian army are concentrated, the main external sponsors of the Syrian mayhem, came up with an idea that, in their opinion, can somehow change the balance of power in the SAR.

This idea is to open a kind of "second front", since the affairs on the "first front" are such that "bearded boys" can shave their beards in a matter of days, and this will be the final point of the release of Aleppo by government forces. The opening of the "second front" against Russia and Assad in Idlib, which is under the complete control of terrorists, did not make sense, because the anti-terrorist coalition frankly leaves Idlib "for dessert." Yes, and information resonance in the case of Idlib clearly would not work.

But in Palmyra ... According to the logic of foreign developers of operations - the most it. Naturally, the fact that the campaign to free Palmyra from ISIS (forbidden in the Russian Federation) was actively highlighted, and how clear was the signal sent by Russia that Palmyra was torn out from the clutches of the barbarians and returned to the world as the pearl of the cultural heritage of the planetary scale.

Therefore, the very possibility of opening a “second front” precisely on the approaches to Palmyra is a clear attempt not only to inflict as much damage as possible to the Syrian government forces and divert certain forces from Aleppo, where instructors and advisers cook in the boiler, but also to reduce the situation to the application of information and reputational damage to Russia. Like, are you - they are transmitting concerts in the amphitheater of Palmyra to the whole world - come on, ISIS infantry, do something for which forces and funds flow into you where it is required ...

And the ISIS infantry gave ... And what else could be expected if the liberation of Palmyra was the liberation of Palmyra. No progress by tens, and even more so hundreds of kilometers north and east, did not work, if then such goals were set. The city freed from terrorists was left “under guard” of those units of the Syrian army that were supposed to, except that, indicate their presence. The rare rumble of airplanes and the whistle of helicopter propellers in the sky over the ancient city made it clear to the developers of the strategy for conducting a terrorist war in Syria that you can wait for a convenient moment (for example, weather deterioration to reduce the likelihood of use aviation VKS of the Russian Federation and Syrian Air Force), distribute forces on the most vulnerable areas for Assad forces and strike.

And so it happened. Having formed four shock groups equipped not only with ISILs familiar with machine guns, but also with armored vehicles (up to tanks), the militants climbed to Palmyra from four directions. The first strikes - with armored vehicles mined at the front lines - are a classic of ISIS terrorist tactics.

Three directions — southern, northern, and eastern — were chosen to cut off the city and its military continent ATS from the main forces in the west of the province. The igilovtsev triple strike is also a clear attempt to cut the Palmyra transport link with Homs, as well as with Damascus. These two transport arteries are truly vital for Palmyra. Progress from these three areas, including the attack from Al-Safra, allowed the ISIL militants to also cut the Syrian government forces in the city into two parts, turning them by building up their own forces in the rear directions to the boilers.

Now about the fourth direction of impact of the igilovtsevs. This is especially interesting from a tactical point of view. The fact is that the detachments, consisting of several hundred militants, attempted to block the Syrian ground reinforcements, which went in the direction of the military base Tiiyas. The “meeting” took place on December 10 on the section where the road to Huvaisis, As-Salamiya and Ham is adjacent to the Homs-Palmyra highway (this is a few kilometers from the said Tiyas base, which also hosts Russian attack helicopters).

A map published in social networks, in which terrorist formations are marked in black, eloquently indicates that for the weekend (December 10-11) the situation was truly threatening. Successful for the militants, an attempt to cut off reinforcements and deprive the contingent in Palmyra of supplies led to an unequivocal loss of the city previously liberated from the militants by the Syrian army.

Before the onset of ISIS: 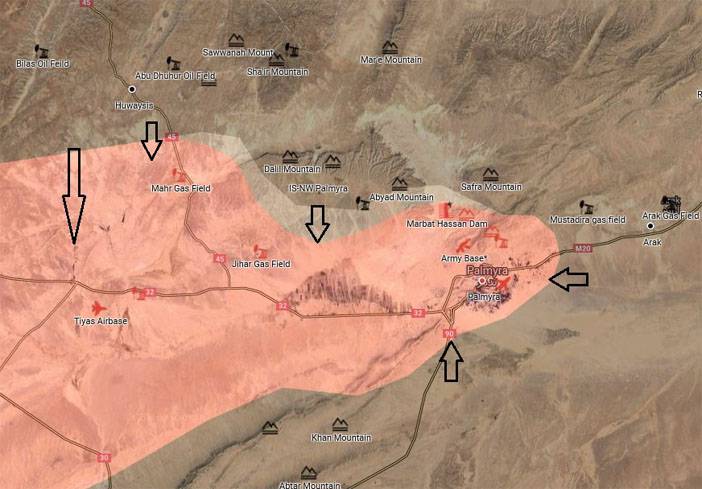 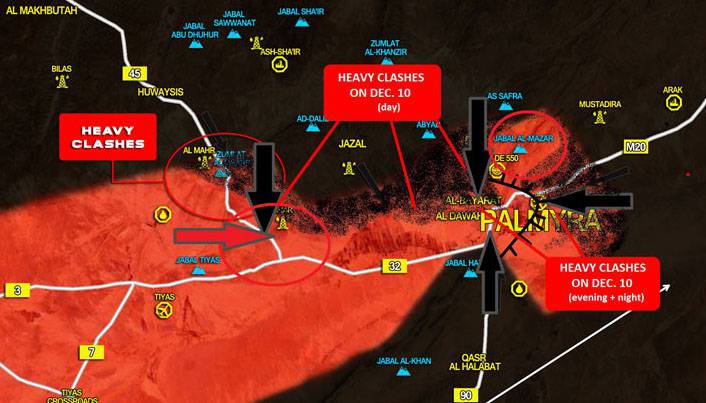 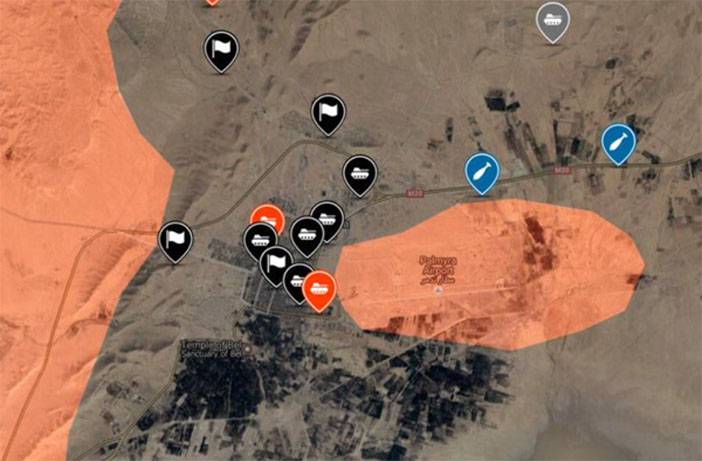 The situation for the Syrian troops exacerbated by bad weather, which stands in the province of Homs for several days. A series of such facts as the most accurate weather forecast for a specific area available to ISIL, the distribution of forces in critical areas, strikes aimed at dissecting the main group of forces in Palmyra, an attempt to cut off Palmyra from several main roads leading to the city, blocking the group reinforcements show only one thing: the operation was not just carefully planned, it was also planned by professionals. Even if we take into account that there are quite a few former soldiers of the Iraqi army (Saddam's army) as part of ISIS, it is hardly necessary to assume that such a thought-out tactic at the most suitable time for this was developed exclusively by former Saddam’s lieutenants. There is a high-quality preparation of the operation, the exchange of information, coordination of the actions of several thousand militants dispersed in the territory of more than 150 square. km In general, the question “where do legs grow from?” In such a situation can be considered rhetorical.

The critical situation of the Syrian troops in Palmyra forced the Syrian and Russian commanders to actively engage aviation, despite the bad weather. First of all, all-weather Mi-28Н and Ka-52 were raised in the air over Palmyra, which also attacked a group of terrorists who were trying to oppose the reinforcement approach in the area of ​​the forks on Homs and Ham. Strikes in the conditions of the strongest fog were inflicted on the militants virtually all night from Saturday to Sunday. The all-weather and nightly activity of Russian helicopters has become an unpleasant surprise for terrorists, plus a new high-quality advertisement for Russian helicopter engineering. However, they got used to the “surprise”, which was expressed in the continuation of the offensive by the Igilovites.

According to Interfax, on the militant grouping in the south of Palmyra, were used Caliber cruise missiles. The operation also involved long-range bombers of the Russian Aerospace Forces. The Syrian command decided to use six aircraft. One of them (MiG-23) on Sunday fell in the province of Homs. The officially designated reason is “technical malfunction”, although it is far more likely that the cause of adverse weather conditions for an effective air operation is suggested.

According to various sources, the total losses of Syrian troops on the morning of December 11 in Palmyra and its surroundings were more than 250 people. The largest number of dead and wounded - to the northeast of the city, where, breaking through the Syrian defense. igilovtsy even able to enter the city blocks. Information about the losses on the evening of the same day came very contradictory. One thing is clear - at least 320 people.

Thanks to air support, which allowed the Homs-Palmyra road to be unblocked, the Syrian army received reinforcements and was able to stop the terrorist attack that was so actively launched. The fighting continued. Al-Jazeera stated that the militants were able to break through to the historical center of ancient Tadmor (the name is Palmyra in the Arabic version). A few hours later, the same channel reported that the militants had completely taken control historical part of the city, while mass evacuation of the population began from the city.

In the Western, Qatari and Saudi press, they do not hide their gloating over the difficulties that Russia and Syria have to face in Palmyra these days. And this is understandable - they (also mentioned by the media) are also against terrorism ... But how else? ..

Thus, it can be stated that the tactics of opening the second terrorist front in Syria worked. The ideological inspirers of the militants achieved their goal - the Syrian army began a large-scale transfer of forces and means to Palmyra, exposing other sectors of the antiterrorist confrontation. The fact is that the Syrian army only has to learn how to consolidate victories previously obtained at great cost and keep the liberated territories. Otherwise, even the heroic deed of Lieutenant Alexander Prokhorenko near Palmyra is actually reset to the lax attitude of the Syrian command. Is this the main task of the apologists for the Syrian chaos? ..