Twice two - not always four, or how do American rating agencies work 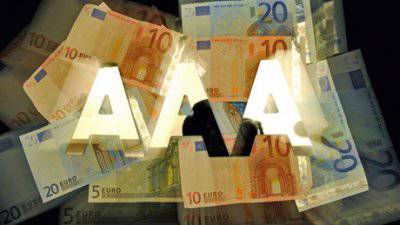 Nowadays, a rare economic review does without mentioning one of the rating agencies. Moreover, in the overwhelming majority of cases, these agencies are American. These include Fitch Ratings, Standard & Poor's and Moody's. After the first wave of crisis in 2008, the listed agencies somehow too actively declared themselves at once. The key phrase here is "after the crisis." In other words, before its attack on the world economy, many countries seemed to know that there were some American rating services that assign certain points to the economic potentials of certain states, but nothing more. There was no doubt about painstaking work in the American rating agencies, which was usually aimed solely at keeping the ratings of their main sponsors at the proper level. And the main sponsor, for obvious reasons, was the United States. It seems that, according to the definition of a free economy, the state has no right in any way to influence private financial institutions, and even more so institutions of an analytical nature of activity, but who said that these institutions are so private?


Questions about confidence in the ratings that Fitch Ratings, Standard & Poor's, and Moody's dare to give themselves have been raised for a long time. However, a truly massive dissatisfaction with the work of these agencies was expressed only after their representatives missed the onset of the crisis of 2008, which, most likely, is not letting go of the world to this day. In principle, the word "missed" is not entirely appropriate here, because the leaders of these companies, naturally, imagined the possible consequences of a large hole in the US financial system. But could they really afford to let their main donor down, thanks to which their active "research" work was carried on for many years. It was the first wave of crisis, suspiciously unnoticed by the American rating agencies, that made them announce with great enthusiasm about the kind of engagement of these offices. They say that the Americans let the crisis monster into the world economic sphere, having failed to deal with the banking deadlock of 2008, and their rating was still AAA, as the highest possible. It is as if a tennis player, having lost everything that could be lost in the season, and even refusing to participate in a couple of tournaments, stably remained the “first racket” of the world. That is, the persons who endowed him with such a status simply could not afford to lower his rating, since he paid them well.

However, it was a secret for a long time that the independence of the American rating agencies was just a big and beautiful soap bubble. After numerous hard-hitting statements addressed to the same Moody's and Standard & Poor's, they nevertheless decided to try to wash off the “dirty” accusations of working for the American debt pit. These attempts were expressed in the fact that the US rating was for the first time in many years downgraded from AAA to AA +, which has already caused a storm of indignation in the American Congress. And this storm of indignation is easily explained. It's just that people who actively sponsor the creation of rating tables did not understand how it is possible to exist on their personal money and at the same time say that the solvency of my sponsor has been shaken. This, at least, looks boorish, - the representatives of the American authorities decided and set the inspection authorities against the rating agencies, which decided to lower the financial status of the United States. Seizures of documents in the offices of companies began, accusations of incompetence, calls not to trust agencies, and much more from the same series. And after that, someone else will say that corruption is a purely Russian prerogative ...

At first, after the US credit rating was downgraded, the Europeans even applauded the decision of overseas rating agencies, forgetting for a while that they had recently accused them of incompetence and bias.

But the joy for the European Union was too short, because, having downgraded the rating of the States, the agencies decided to make amends to the sponsor and began to lower the credit ratings of European countries right and left. Even France and Austria, whose economies are relatively strong in comparison to others, have learned that the credit of confidence in their financial systems is lowered. The Portuguese and Greek level were generally "drowned". Today, for example, the Greeks have a CC rating (according to S & P), behind which only default is gaping. For example, Russia's rating is BBB, which can be classified as “stability” and “solvency”.

The downgrade has affected 9 of European countries, and this list can be considered as not closed. After the Italian authorities learned that American analytical companies decided to lower their credit rating, they followed the example of their overseas colleagues and began to "wool" the offices of the "three American whales" of analytical forecasting of financial risks.

Why are some flimsy letters or numbers in the reports of rating agencies make the leaders of the states and the business elite so nervous?

The thing is that the lower the country's credit rating, the higher interest this country will receive new loans. Debt snowball from this will only increase. It is worth quoting one indicative phrase, which was once uttered by one of the American journalists. He said that now in order to destroy the country you can not enter Tanks - simply lower her credit rating. And this, in principle, is close to the truth.

The weaker the state's economy, the more difficult it is to find funds to repay liabilities to banks. However, it also happens that a decrease in the country's rating leads to a new development impulse. One example: the downgrade of Russia's rating from 1998 to BB to D is the default on government bonds. But since then, the Russian economy began to get out of the debt trap. Certainly, the rising prices for hydrocarbons also played a role, but this is one of the positive factors for Russia.

Following active actions to lower the overall rating of the European Union, the words were heard that it was time to once and for all abandon the use of information from US rating agencies. In Berlin, Paris and Brussels, they began to speak out in favor of creating a European analytical agency that would certainly accurately assess the level of positive or negative in the European economy. Like, in this case - no bias!

In Russia, they also decided to go this route. Vladimir Putin expressed the view that it would be nice to work on the creation of a Russian analytical agency, which, of course, will also be independent.

At the same time, for some reason neither the European nor the Russian authorities are talking about what to do with the already existing rating services. For example, in Russia, Expert RA has been operating since 1997 of the year, and the National Rating Agency has been operating since 2000 of the year. And this is not a complete list. The only thing is that Russian businesses often openly look at the work of these structures through their fingers. Therefore, for these agencies to be able to raise Russia's credit rating, Russia will have to first raise the rating of these agencies themselves ...

Yes, and whether such fecundity of analytical structures around the world will lead to a positive result. In this case, you can generally advise to create a rating service in each state. And let this service assign such a rating to the national economy as the government and business of this country would like. Only all this will lead to complete confusion, and they will no longer trust such ratings in the world at all.

Therefore, dreams of a truly independent rating agency remain only dreams, because any independence also wants to eat ...

Ctrl Enter
Noticed a mistake Highlight text and press. Ctrl + Enter
We are
Rating weapon of economic warThe keys to the world are in the hands of Russia
16 comments
Information
Dear reader, to leave comments on the publication, you must to register.