T-80 for Iran: neither to yourself nor to people 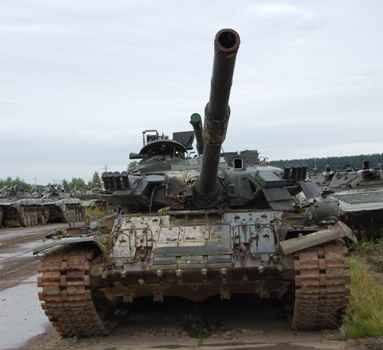 In 2004, the Iranian military wanted to acquire 200 units tank T-80U. This information was unexpected for Russian tank-building enterprises, since the main manufacturer of the T-80U tanks was the Omsk Transport Engineering Plant, which for a long time could not produce these tanks.

The question of starting the production of T-80U at one of the factories in Nizhny Tagil was seriously considered. But further conversations the case has not progressed. After all, it would only take several years to start assembling a combat vehicle of a different design on a conveyor belt. As a result, the Iranians have cooled this issue, and more proposals have been received from them.

By the way, there was a real chance for the realization of this transaction. In those years, the T-80U tanks were massively decommissioned from the Kantemirovskaya and Tamansky divisions. They have already developed their resource and they are distilled into tank repair plants for further disposal. True, only the corps of combat vehicles was disposed of, and the towers were carefully stockpiled.

At that time, work began in Russia on the modernization of the previously released versions of the "eighty dozen" - T-80BV. The projects assumed the use of towers from decommissioned T-80U on the old buildings of the BV model.

The plans were the refinement of the fire control system, the installation of a new improved model of night vision, providing a high target recognition range using an electronic third-generation optical converter. The engine power should also increase with the HP 1100. to 1250 hp In addition, it was planned to replace the old dynamic protection of the hinged type of the first generation with the improved “reactive armor”.

This version of the upgraded tanks began to enter service in April 2005, but in extremely small quantities. And in a short time, the entire gas turbine branch of Russian tank construction was generally considered not promising. It turned out as in the well-known proverb: neither myself nor people. And there was a real chance to give the “eighty dozens” that were not needed to “good hands”.

After all, Belarus was able to "float" Yemen with the T-80BV tanks that became useless armies. Iran, on the other hand, would receive combat vehicles, even surpassing in some ways those serial T-80U that are now in service with the Russian army.