Kotesu is a ship of unusual fate (a dramatic story in six acts with a prologue and an epilogue). Part four

December 16 2016
8
Epilogue. Telling that everything passes, but Fuji remains.
From everywhere came

In May 1869, the combined imperial squadron with the battleship Kotetsu led led its last battle with the Republican fleetwho tried in vain to prevent the landing at the town of Hakodate. The rebel ship Banru managed to sink the imperial Choyo, but all their success ended there. Both the Kaiten and Banru were riddled with Kotetsu shells and sank, and the Chiyodagata abandoned by their crew sank along the shore, and the Chogey, Mikaho and Shinsoki ships were forced to leave the battle. Surviving sailors were caught from the water by sailors from the English ship Pearl and the French Kötlo-gon, who watched the battle with interest. By the way, these two naval battles - the first in Quince Bay and the second at Hakodate - became the first battle test for a young officer of the imperial fleet of the third class, Heihatiro Togo, who, having received a baptism of fire here, later became an admiral who defeated the squadrons of the Russian fleet at Port Arthur and Tsushima during the Russo-Japanese War of 1904-1905 But here at the "Cotets" he nevertheless failed to serve. He sailed on the ship "Kasuga".

After the defeat of the fleet sucking imperial troops landed on land, where they completed the defeat of the military forces of the republic. True, not immediately, as fierce battles were still a month. Hakodate was blocked from the sea and subjected to fierce shelling from ships. The rebels responded and even managed to cause damage to the squadron of the emperor, but then someone noticed that the gun "Kotetsu", and above all the one that stood in the nose, long-range guns of coastal batteries. 13 May stray bullet during a battle on the coast was killed by the commander of the land forces of the rebels, and just the next day a bomb from the Kotetsu was blown up by the powder cellar of the battery Benten. Approaches to the city were open, so either 17, or 18 of May (different sources give different dates), the rebels surrendered. As a result, the republic in Japan lasted only six months and has never been restored. 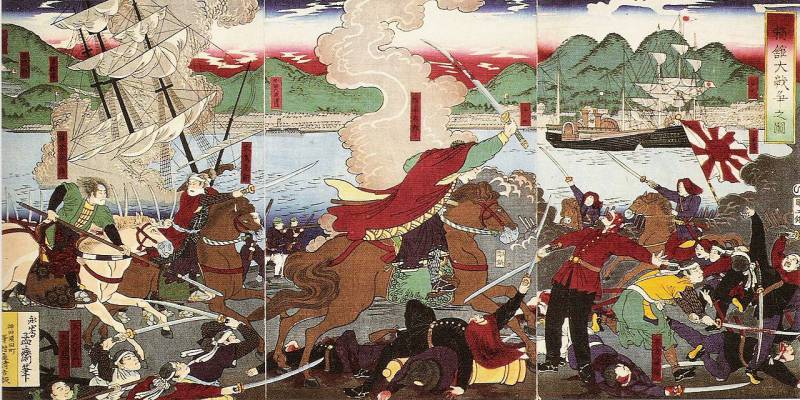 The naval and land battle of Hakodate between the imperial troops and the traditionalist rebel forces. Japanese uki-é engraving.

The French instructors were sent home, but soon they were invited back - why not ?! Their second mission arrived in 1872 (after the defeat in the war with Prussia, when many officers were out of work, and they had to go somewhere). And they rendered assistance to Japan substantially. For example, under the leadership of engineer Emile Bertin, it was the French who built the first steam armored fleet to the Japanese, and it was only then that they switched to building ships in England.

Well, Kototsu in 1871 was renamed “Azuma” (“East”) in honor of the clan, which by this time provided great services to the imperial fleet. After all, the reforms in the country did not go as smoothly as the reformers wanted, and it was necessary to somehow reward the faithful clans and faithful people. In 1877, for example, a rebellion broke out in Satsuma raised by Saigo Takamori. But it was also suppressed, but the Azuma in the fleet continued to sail until 1888, and then for many more years was used as a floating warehouse and landing stage. In the 1870s, future admirals and vice-admirals such as Ito Sukeyuki, Inuye Yoshik, Kodzo Tsuboi, Tate Kurook and Tsunob Hidematsu served there. During his career under the French, Danish, Swedish, Confederation flag, American and Japanese flags, this ship went across the seas of almost half of the world, setting a kind of record of its time for ships of its class. But this история the ship. But what about the people associated with it? Oh, their destinies are also very interesting and in their own way instructive! 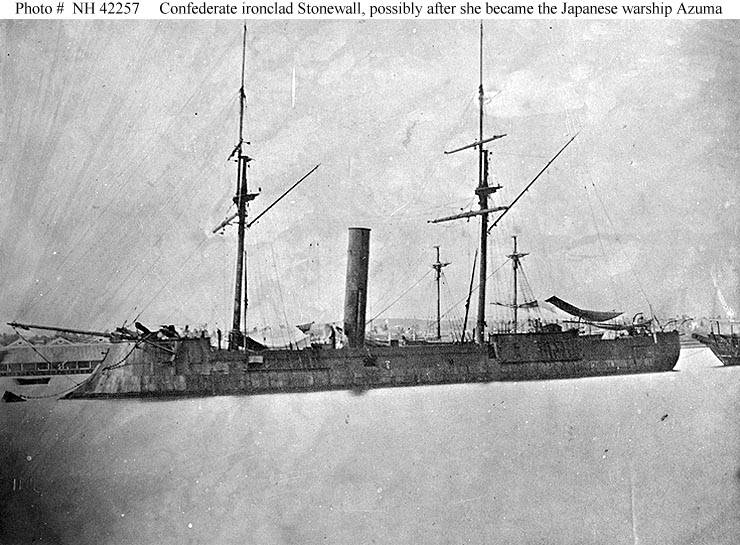 The battleship "Azuma" - the former "Stonewall".

For example, the victors did not execute and punish the admiral of the rebel fleet Enomoto Takeaki, but offered to become the admiral of the Japanese imperial fleet, and then the minister of the sea. And he, of course, agreed, but he naturally forgot about his oath of allegiance to the Republic of Ezo. He raised his own flag in the glory and pride of the Japanese navy - the battleship Azuma - the old ship well known to him with a new name. Once he really wanted to capture it. Now he fell on him without a single shot, with the exception of idle volleys of ceremonial salute in his honor. Takeaki died in 1908. And in the same year, the Azuma coast guard ship was scrapped - the story of Cheops - Stonewall ended there!

As for the captain of the "Stonewalk" Thomas Jefferson Page, he went to Argentina with his two sons - Philip Nelson and Frederick. There in 1852 - 1856. He led the hydrographic studies of the Argentinean rivers Paraguay, Bermejo and Teuco and made many friends here, including two presidents: General Urquizo and Bartholomew Mitra. First, he bred sheep on lands that the presidential friends gave him, and then he joined the Argentine navy, strengthened the coastal defense of the country, created the first destroyers, was the official representative of the Argentine fleet in England, France and Italy, where he observed for the construction of battleships on the orders of the Argentine government. He died in Rome in 1902 at the age of 94. His son managed to become a captain, and his grandson - so did the admiral of the Argentine navy.

Assault on Kaneiji Castle during the Battle of Ueno. Picture in the style of uki-yo.

Another stonewall captain, Hunter Davidson, also went to Argentina and there became the first commander of the destroyer squadron. He explored the rivers, participated in laying the underwater telegraph cable and was awarded the title of honorary member of the Argentine Maritime Center. He died 16 February 1913 g. When he was 86 years.

The captain of "Niagara" Thomas Tinya Craven military court sentenced to two years in prison for failure to fulfill his duty, that is, because he did not attack the "Stonewall" during the transition by sea, but the case was canceled by the command of the fleet, which he admitted caution justified. Whether he should have attacked or not - then they argued about it both in the newspapers and in the saloons, but no one doubted that Craven was a brave man, and his indecision was most likely explained by his sentimentality, and by all means not cowardice. Well, he could not shoot at Page's ship, with whom he, aboard the Erie, was chasing pirates in distant 1828. Therefore, it is not surprising that this whole story with “Stonewalk” did not hinder him in obtaining the admiral's rank in 1866. Craven of 23 of 1887 in August at the age of 79 passed away.

But James Balloch was not forgiven, he spent the rest of his days in England, where, as before, he was selling cotton. For nearly ten years, litigation between England and the United States for damages inflicted by the martes of the southerners, while in 1872 the international arbitration court did not order the British to compensate the Americans for some of the damage from the actions of Balloch's pets - Alabama, Florida, and a number of other vessels, privateers. It is clear that if the Stonewall fell into the hands of the Confederates somewhat earlier, the French would not have been able to pay for their actions at sea. He died of cancer and acute heart failure 7 in January 1901 in Liverpool in 77 years.

The first and last Japanese president, Takeaki Enomoto, from the Tokutava clan, was accused of treason, so he spent five years behind bars, before 1872. But then he was forgiven and sent to Russia for border negotiations in 1874. The following year, it was he who signed the St. Petersburg Treaty, under which Japan abandoned its claims to Sakhalin Island in exchange for ... all of the Kuril Islands, down to the shores of Kamchatka. He made a successful career: he was Vice-Admiral, then Navy Minister, became the first Japanese Minister of Communications and Communications, then Minister of Agriculture and Trade, and Minister of Education, and even the Minister of Foreign Affairs. Enomoto died in 1908 at the age of 72.

The fifteenth and last Shogun Yoshinobu Tokugawa was released in exchange for refusing to participate in public affairs. He lived in solitude, was engaged in photography, so in 1902, for his loyalty to his person, the emperor even returned his princely title to him. Yoshinobu passed away on November 22 on November 1913 at the age of 75 years, only slightly outliving the emperor. 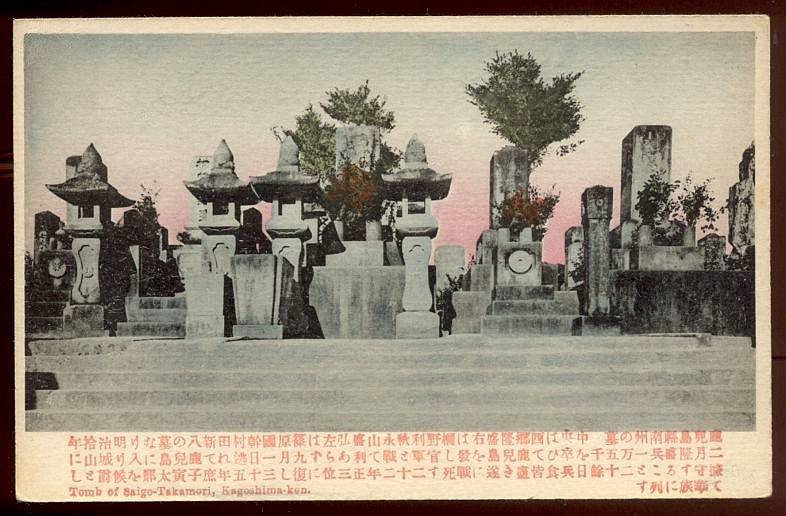 The grave of rebellious Saigo Takamori and parts of his combat comrades in Kagoshima, Japan. Postcard, approx. 1910.

As for Mutsuhito Meiji, 122 of the Japanese emperor, the power in the country from the Tokugawa clan was transferred not to him, but to the Daimyo clan, since he himself was still too young and needed ... "gray cardinals". During his reign, the modernization of the country was completed, ensuring the victories of Japan in the Sino-Japanese (1894-1895) and Russian-Japanese (1904-1905) wars. Then for the first time “Japs” and “macaques”, as they were scornfully called in Russia, defeated the European nation and what kind of nation of the “Third Rome”! Although the special merit of the emperor was not. Surprisingly, Mutsuhito was a pacifist, a man of gentleness and kindness, although his subjects had no idea about this, since the life of the emperor for ordinary Japanese remained a secret behind seven seals. In 1910, an attempt was made on his life by anarchists. But they should not have been in such a hurry, but they had to wait a bit: after all, Mutsuhito died only two years later - July 30 1912 was at the age of 60 years

Frenchman Jules Brune surrendered to the imperial authorities, and as a punishment ... he was sent home, where he was forced to serve time for desertion, though not very big. But in the Franco-Prussian War 1871, he distinguished himself, then was captured by the Prussians, but he was released from the fortress along with other officers to fight the Paris Commune. He fought against the Communards together with the Versaillese, and ... eventually made a good career, having received the post of Chief of General Staff.

Another Frenchman, a colleague of Brune, Eugene Collash, too, became a prisoner, but the Japanese sentenced him to death. Sentenced ... but not executed, and also sent back to France, where he was also convicted of desertion. During the war, 1871 fought in the French army. Wrote the book “The Adventure in Japan in 1868-1869”, which was printed in 1874. The same fate befell in Japan and Henri Nicolas, who was deported to France and convicted by a French court for desertion. They freed him in connection with the beginning of the Franco-Prussian War 1871. Like the other heroes of our drama, he joined the army as a volunteer, but he was not lucky: having escaped death in a foreign land, he died for his fatherland.

As for the commander-in-chief of the republic's forces, Ezo and the shogun Otori Keisuke, he also surrendered, was imprisoned for treason against the emperor, but was amnestied already in 1872, after which he became a politician and a member of the new government. He supervised the Higher Engineering School and the Gakusuin School for Children of Japanese Nobility. From 1889, the ambassador to China and Korea, and one of the initiators of the Sino-Japanese War 1895. That’s what they all had ... karma!