One against several dozen (about Tatiana Baramzina)

December 8 2016
35
Hero of the Soviet Union Tatiana Nikolaevna Baramzinu in this article I will call Tanya. She was quite young, twenty-four years old. But, apparently, life has not been measured for years. 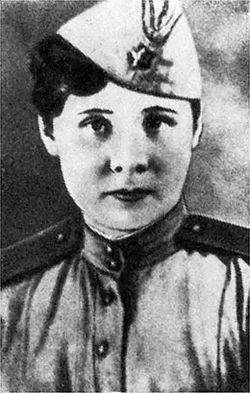 Tanya was born in December 1919, in Udmurtia, in the city of Glazov. In a large family grew - six children (Tanya - fifth). The need did not just knock at the door of a small wooden house, but had a permanent residence permit here and kept herself mistress. The head of the family, Nikolai Makarovich, worked on the railway, fished, tried to trade baked bread. Trade was very bad, one might say, it was treading on the spot - not such a person was Nikolay Makarovich. After his death, his wife, Marfa Mitrofanovna, continued the work. She baked rye bread and sold it on the local market, but it also didn't work for her.

Tanya has been growing stubborn and very hardworking since childhood. It was she, being almost the youngest, who every summer took her brothers and sisters to collect medicinal herbs and mushrooms. The guys tried to help the mother as they could. Mastered fishing, catching crayfish.

Tanya very quickly and for all her life fell in love with reading. She studied well, graduated from the pedagogical school (external), began working in rural schools (from 1937 to 1940 years). Then she went to Perm, entered the Pedagogical Institute at the Faculty of Geography. And to help the family, at the same time began working in kindergarten. Tanya did not say that she was a teacher by vocation, but her children loved her very much, loved to play and just talk. Only Tanya managed to put the group to bed on time. And when a blizzard or a blizzard happened, the kids ran to their beloved teacher in a race — only she could calm them down and distract them from the scandal of the impassive aunt. Looking ahead, I will say that even at the front, Tanya received letters from the head of the kindergarten, and in envelopes always found also children's drawings, made especially for her. She answered these letters, the children wrote fairy tales, interesting stories. Tried to distract from the war. Only once did Tanechka send a very serious letter to kindergarten and enclosed a postcard with a portrait of Zoya Kosmodemyanskaya - the feat of the girl shook Tanya. But back again ...

The Great Patriotic War began. Tanya could stay in Perm, continue working in the kindergarten, where they brought evacuated children. But she was determined to go to the front. I had to retrain: the girl graduated from nursing courses.

Having been in the kindergarten for the last time, Tanechka burst into tears. She did not tell her chicks about the imminent parting, but it was felt literally in everything. The children surrounded her, asked for a fairy tale. Tanechka was a teacher before telling, but now she could not. She stopped in mid-sentence and promised: “I will finish speaking after the war ...”

On the front, Baramzin’s soldiers - since the summer of 1943. For our fighters, Tanya has become not only a nurse, but a loved one. It would not be an exaggeration to say that she was worried about every wounded person who often acted as a donor. In her free time she was washing and repairing the clothes of the soldiers; she could have tonsured hair as well as any hairdresser.

She wanted to do as much for our Victory as possible, she graduated from the Central Women's School of Snipers and was enrolled in the 3 Infantry Battalion of the 252 Infantry Regiment. Tanechka’s personal account is twenty fascists (there are data - 36 and 16), she opened it early in the morning near the village of Dribino, in Belarus (that day she killed two Nazis).

This is how brother-soldier Alexander Solomatin recalled Tana about the supply squad: “In April 1943, a new sniper appeared in our battalion - a girl. Not tall, smiling. We immediately fell in love with her: for demanding herself and her comrades, for being concerned about everything. It so happened that the cooks would repay the tasteless borscht and porridge, once she got up to the pot and showed how to cook, so that it would taste better. And the scruffy soldier will be ashamed so much and laugh to laugh that he will forever remember the case of the dirty gymnast or the torn off button ... "

There was a case - one day she laid five fascists on a raft. Three - immediately, and two managed to jump into the water, but that did not save them from a bullet. That day was a great joy for Tanya and at the same time - pain. Hemorrhage happened, then another. She could no longer be a sniper.

Tanya was sent to the hospital - her fellow soldiers were afraid that the girl would be completely blind. But she refused - they say I will heal after the war, but for now I will be a nurse. At the same time she mastered the case of the signer. One day, tidying up the damaged line, Tanechka advanced quite far from her and noticed two Germans. She crawled to the command post, lifted the fighters to their feet and led them along. A battalion died in the shootout (there were more fascists). And then yesterday's kindergarten teacher rose to her full height, shouted: “Follow me, go ahead!” - and rushed at the enemy.

23 and 24 June 1944 of the year - the eve of the offensive operation of our troops in Belarus. Tanya was responsible for liaison between the regiment and battalion command posts. But the terrain was such that the connection endlessly faltered. In just one day, Tanya 14 once corrected the problem. Either in belligerence, then on the knees, then jogging moved. How many kilometers reeled ...

5 July 1944 was a heavy fight near the village of Pekalino (according to some sources - near the village of Shemetovo, a few kilometers from Pekalino) - during the march to the knot of roads, the battalion in the rear of the enemy faced the Nazis, whose forces were many times superior. You had to hold on until the arrival of the main forces (the battle will last for nine hours). There are many wounded, very. Tanya during the battle provided assistance. Those who could no longer move were dragged into the dugout, which was on the edge of our position. And it so happened that the fascists cut off this blindage. Who are they going to fight with - those who lay unconscious? With a girl, the only defender of the wounded? Well ... She grabbed the gun and began to shoot. The fight started - desperate, doomed, too unequal. But still, Tanya has laid more than twenty Nazis! She was stronger than two dozen adult men.

She ran out of ammo, then grenades. In the dugout broke enemies. And whom did they see? Yesterday's student, nurse, signler, sniper, teacher, educator. Not mother by age, but mother in essence.

They did not have time, because there was a fight. But the monsters could not stop their revenge. They shot the wounded, and they began to torture Tanya. They stuck their bayonets, gouged out their eyes, cut off their breasts, and shot them with an anti-tank rifle ...

When our reinforcements approached and the soldiers broke into the dugout, they were able to identify her by hair and scraps of clothing. Tanya was buried near the village of Volma, wrapped in two cape tents.

Tanya became the Hero of the Soviet Union. 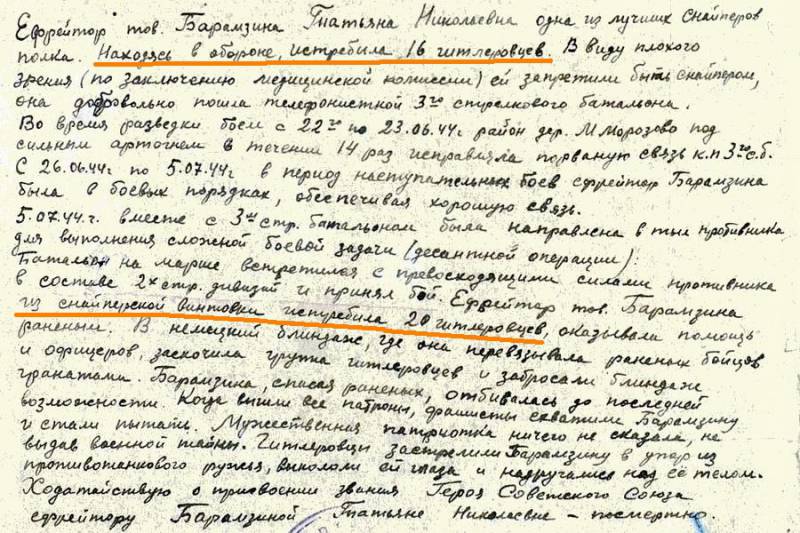