December 10 2016
26
Customs officer Vereshchagin - fiction or were there such people in life? Historical The search led to discoveries.


"White Sun of the Desert" has become a legend of the national cinema. The images of Comrade Sukhov, Petrukhi, Said, even Abdullah turned out to be truly memorable. But even against this background, Pavel Artemyevich Vereshchagin, the former head of customs, stands out. About his pre-revolutionary life is said sparingly, but it is already clear that the man held everyone in his fist, it was based on state power in the whole district. Vereshchagin is not afraid to go alone against a gang of armed thugs ... 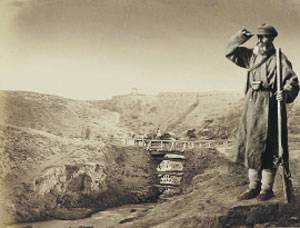 In 1875, there was a plot in Kokand against Khan Khudoyar. The heir to the throne, Seid Nasr-Eddin (Nassir-Edin) overthrew his father. He was supported by anti-Russian representatives of the Muslim clergy and a number of high-ranking officials. Under the Seid subordination was the garrison of Andijan (five thousand people), the division of a high-ranking dignitary Abdurakhman, another four thousand sabers joined him. Osh, Namangan and Asaka joined the rebellion. Soon the khan was betrayed by his brother (the ruler of Margelan) and another son - Mohammed Alim-Bek, the commander of the infantry squad. Khudoyar attempted to fight, but the army threw him, only a few hundred people remained.

Khudoyar fled and was saved by a miracle: on the way he met a group of Cossacks Skobelev and Weiner, who were engaged in reconnaissance. The Khan convoy and the Russians went together, and Weiner sent a messenger to Lieutenant Colonel Nolde, the district chief in Khojent (now Tajikistan). Somehow, the rebels learned that reinforcements were in a hurry to help the Cossacks and stopped the persecution.

Khudoyar was expelled, but this did not calm down. Kokandy people got into the habit of attacking Russian forts. Unfortunately, they know little about the heroes of that era. It is the duty of the historian to tell at least examples of courage that must not be forgotten.

At the station Murza-Rabat served as warden Stepan Yakovlev, shooter stock. The station was a tiny fort with a "garrison" of a single person. Yakovlev was aware of the approach of the Kokands, and he had enough time to leave his post. But the elder decided to fight back the enemy. He filled the entrance with carts and firewood, climbed the tower himself, taking everything with him weapon - two rifles and one rifle. When the gang of Kokand approached the gate, Yakovlev made three shots.

The enemy retired, but after waiting a bit, he rushed to the fort from different sides. While Yakovlev was reloading his guns, the Kokands broke through the gates. Stepan quickly descended from the tower, went to the bayonet, and again threw the enemy. The night was spent in constant shelling of the entrance, so that Yakovlev could not overwhelm the breach. In the morning, the attackers changed tactics: they made sheaves of dry clover, set them on fire and began to throw them over the walls. The "garrison" took refuge in the station house, and then the enemies, destroying the roof, threw the burning clover inside. The headman rushed to the breakthrough in the hope of getting to the next building, put several people down, but died heroically, a little short of his goal - a simple soldier of a great empire. Kokands took his head with them.

In tsarist Russia, the memory of the hero is preserved. At the place of his death, a plate appeared with the words: “The indefinitely holiday 3 of the Turkestan rifle battalion of arrows, Stepan Yakovlev. He was killed by a band of Kokands, defending the Murza-Rabat post office 6 in August 1875. To the valiant Turkestan warrior for the memory of donations of passing. 1877.

The stove did not last long, it was destroyed by unknown enemies of Russia. And yet, on the twentieth anniversary of the feat, Yakovlev was erected with a granite monument from officers and riflemen of the 3 of the Turkestan Rifle Battalion.

Deeds commit and generals, and soldiers. Unfortunately, the names of big people usually get into textbooks, while others are gradually forgotten. This is an obvious disadvantage of our education system. In Soviet times, they talked a lot about Matrosov, Kosmodemyansk, Panfilov, but suppressed pre-revolutionary heroes. It is time to correct the shortcoming - to return to our memory all worthy people, regardless of the era in which they lived.

On the day of the death of Stepan Yakovlev, the Kokands raided Khujand, killing several coachmen and headmen, capturing 18 prisoners (most civilians). Turkestan Governor-General Konstantin Kaufman responded in his uncompromising manner: he ordered the troops to prepare for action. 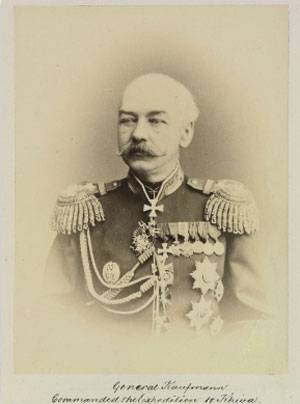 Mikhail Skobelev, appointed to command the cavalry, took the rocket launchers with him, and they were useful in the first encounter with the enemy's cavalry. Under the Mahram, the Kokands tried to cover our right flank, but rocket fire turned them into an irregular flight. Skobelev led the cavalry forward with the aim of going back to the enemy's rear and cutting off his ways to withdraw. But nothing came of this, the Kokand retreated so quickly that it was not possible to overtake them.

Seeing that the original plan failed, Skobelev personally rushed to the enemy and cut himself in the thick of the battle along with the simple Cossacks. Despite the overwhelming numerical superiority, the Kokands became confused, threw two guns and ran without thinking about an organized retreat. But having received reinforcements, while Skobelev had only three hundred, including missilemen, they came to their senses. Before them stood a small Russian detachment, and they decided on a counterstrike. This fight could be the last for Skobelev, but the situation was again saved by the rocket men. The battery commander got close to the enemy at a distance of a shot and fired 15 rockets. That was enough to break the counterattack.

The victory of the Russians was complete, Mahram fell, the 60-thousandth army of Kokand collapsed, and its leader Abdurakhman ran among the first. Now the path of Kaufman lay right on Kokand. Khan tried his best to make amends, sent gifts and ambassadors to the governor-general with apologies. The Russian general did not accept the offerings and said that he would speak not with the ambassadors, but personally with the khan. Locals greeted our army with fruits, merchants came from Kokand with a treat for the soldiers, and the Khan hastily freed the previously captured Russian subjects.

In captivity, the soldiers of Kaufman found Dr. Petrov's infant daughter. The child saw his father cut off his head, and she herself was always afraid of reprisal. Upon learning of this, Tsar Alexander II ordered all the children of Petrov (there were three of them) to be taken on from the budget.

Without much interference, our army advanced to Kokand, and at the beginning of September 1875, Skobelev, with Cossacks, artillery and rocket men, entered the city. A little later, Kaufman occupied the capital, but the war continued: Margelan was still to be taken, where Abdurahman was hiding with the remnants of the troops. But he, as soon as we came out to Margelan, fled again, this time towards the mountains, to the Ming-Tube tract. Catch the bastard had Skobelev.

The Russian commander whipped around the territories still remaining in the hands of the rebels. The troops loyal to Abdurakhman were demoralized and the masses left their leader. As a result, only a handful of minions remained with him. And although it was not possible to catch Abdurahman, his army ceased to exist. It seemed that the enemy would not rise again, and Skobelev stopped the persecution.

The outcome of Kaufman’s campaign was a peace treaty with Kokand, according to which Namangan feudalism retreated to Russia, but then Abdurakhman appeared in Andijan, gathering 70 thousands of supporters. The war broke out with a new force. How not to remember the saying about the unshelled forest, which always grows again?

This time, Kaufman instructed Skobelev to reconnoiter the fortifications of Andijan, and entrusted the command of the assault to General Trotsky. Throughout the city, the rebels staged debris and barricades, our squad was shelled from behind every stone and corner ... It became clear that Abdurakhman did not even think about giving a general battle, but relied on exhausting street battles. Then Trotsky ordered the city to be set on fire and subjected to artillery shelling. Then he considered his task accomplished, and the rebels punished.