Robotic complex "Surrogate": a small submarine for the exercise of the fleet

December 8 2016
17
In the future, the arsenal of the naval fleet a new crewless complex designed for use during exercises and maneuvers may be adopted. Specialists from a leading enterprise in the domestic shipbuilding industry have developed the concept of a promising vehicle capable of replacing full-fledged submarines in some situations. The main objective of this development should be participation in combat training activities. In addition, the use of such equipment for other purposes is not ruled out.


Information about the appearance of a new proposal concerning the further development of special facilities for the navy was published on December 6 by the TASS news agency. The information was obtained by the news agency from the press service of the company, which is the author of the original project. Some information was published about a promising project concerning certain features of the equipment and its characteristics. Other data, for obvious reasons, can not yet be published.

According to TASS, the specialists of the Central Design Bureau for Marine Engineering (TsKB MT) "Rubin" created a concept-project of a marine robotic complex designed for use in exercises of surface and underwater forces of the navy. The project of the original product, intended to replace full-fledged submarines in some situations, received the appropriate name - "Surrogate."

Possible appearance of the apparatus "Surrogate"

As part of the original project, the main features of the design and methods of practical application of unusual equipment were formed. To date, information about the project "Surrogate" has been transferred to a potential customer in the person of the Russian Ministry of Defense. Now the representatives of the fleet and the designers of the Central Design Bureau “Rubin” are conducting consultations, the purpose of which is to identify ways to further improve the existing project.

Describing the goals and objectives of the new project, TASS quotes the words of the general director of the Rubin design bureau Igor Vilnit. The general director of the company recalled that in order to participate in exercises or trials, combat submarines now have to be involved, which is why they cannot continue to solve their main tasks. The use of uninhabited simulator, proposed in the project "Surrogate", will eliminate the need to remove the boats from combat duty. In addition, the cost of combat training activities will decrease, as well as risks will decrease. The realism of the exercises, however, will remain at the required level.

To solve such problems, a prospective device must be distinguished by a low cost of maintenance and modernization. It should also be easy to operate. One of the goals of the ongoing consultations with the Navy is to meet the requirements of the potential customer so that the Surrogate product fully meets the expectations and needs of the fleet.

The project “Surrogate” is still at the stage of elaboration of a general concept, however, images have already been published showing the possible appearance of such a product and the general principles of its work. Also, CDB MT "Rubin" announced some characteristics and potential opportunities. In the case of full implementation of all existing plans, the result of current work will be the emergence of a very interesting and promising underwater robotic apparatus.

According to published data, the product "Surrogate" will be a small submarine, equipped with a set of automated control systems and capable of carrying special equipment. The device will have to get a cylindrical body with a lively nose fairing. On the sides of the hull provides space for the installation of some special equipment. The horizontal and vertical rudders necessary for maneuvering should be located on the narrowing part of the stern. Propeller will be located inside the annular channel. The total length of the special unmanned submarine should be approximately 17 m. The design displacement is 40 t. The design of the robust hull should ensure safe diving to depths up to 600 m.

The device type "Surrogate" will receive an electric power plant, which will include a battery based on lithium-ion batteries. The parameters of such a battery should be able to ensure the continuous operation of the product for 15-16 hours. At the same time, an unmanned submarine will have to be able to change the speed of travel, maneuvering, etc. without significant restrictions. The maximum travel speed is planned to reach the 24 nodes. At a speed of 5 knots, the cruising range will exceed 600 nautical miles.

The main objective of the new project is to create a special tool suitable for use in training activities. In the course of such work, the Surrogate, justifying its name, will have to imitate full-fledged submarines of various classes and types. It is proposed to imitate the submarine of a conditional enemy by moving with appropriate speeds and maneuvers. In addition, special simulation systems must be present on board. With the help of these devices, including those equipped with towed antennas, the Surrogate product will be able to realistically reproduce the physical fields of a real submarine. According to the noise produced or the electromagnetic field, the simulator should not differ from the real submarines.

It is proposed to change the “purpose” of the unmanned underwater vehicle by installing certain instruments. Due to the modular design, such a submarine will be able to receive the necessary devices of the required types, with which it will simulate a non-nuclear or atomic submarine of a conditional enemy, the type of which is determined by the current exercises scenario.

The modular design architecture can also be used to further develop existing ideas. So, as a payload, the product “Surrogate” can carry not only the means of imitation of a submarine, but also equipment for other purposes. Nothing prevents equipping such robotic submarines with reconnaissance or mapping tools. In this case, the possible use of a robotic complex goes beyond combat training events alone.

To date, the overall appearance of the perspective Surrogat system has been formed. Now the specialists of CDB MT “Rubin” are discussing the original concept-project with representatives of the potential customer, which is necessary for making various corrections and improving the existing development. In the future, all these works will have to lead to the emergence of a full-fledged project, according to which serial samples of equipment for the navy will be built. It is noted that the developer organization does not exclude the possibility of displaying interest in a new project on the part of foreign customers. 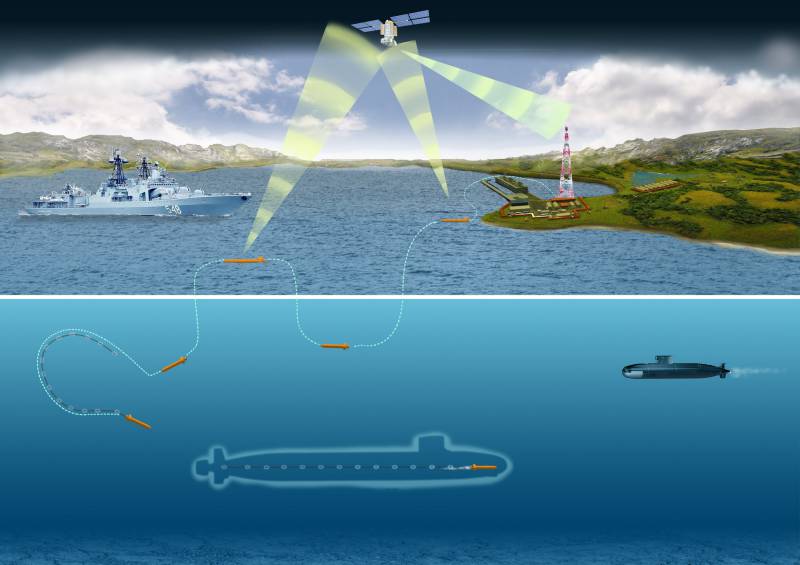 The principle of the complex

The original concept, implemented in the project of the Central Design Bureau “Rubin” under the provisional name “Surrogate”, may be of great interest to the navy. As representatives of the developer organization rightly point out, at the present time, in the course of conducting exercises to develop anti-submarine defense, the role of a conditional enemy trying to secretly break into the protected area is assigned to submarines. This approach to the organization of exercises has certain advantages, but there is also a serious disadvantage: it is obvious that in case of a real armed conflict, Russian anti-submarine ships and aircraft will have to deal with foreign submarines that have certain differences from domestic submarines.

The original concept underlying the new project, in theory, allows you to create a set of special equipment that simulates any underwater targets. Having information about the physical fields of the potential enemy’s submarines, domestic experts can develop appropriate simulators. Thanks to this, anti-submarine defense will not be practiced on their submarines, but on simulated foreign ones. It should be expected that this approach to training the fleet and the sea aviation will lead to certain positive consequences.

Of some interest is the proposal concerning the use of robotic devices "Surrogate" as carriers of special equipment that is not directly related to the imitation of submarines. In this case, the modular architecture of the product can be used to “master” new specialties. In particular, representatives of the developer organization mentioned the possibility of using mapping or reconnaissance equipment. Such a modification of a promising complex can be used outside training activities for solving various tasks. In addition to expanding the range of tasks to be solved, such an application of the “Surrogate” will allow to obtain the benefits associated with the unification of various-purpose equipment.

However, when studying the available information about the project "Surrogate" can not do without complaints. The public image of the system and the proposed methods of application suggest that promising new-type robots can actually be used during the Navy exercises, but they should not completely displace full-fledged submarines from these events. The fact is that during the development of the anti-submarine defense, the crews of surface ships, submarines or aircraft learn to detect potentially dangerous objects at depth and attack them. The crew of the submarine, during such exercises, taking on the role of a conditional enemy, in turn, learns to break through the defenses of the enemy. If we take into account the main goals and objectives of the submarine forces of the fleet, we can conclude that the training is of great importance from the point of view of the “conditional enemy”.

Replacing the submarine with a crewless device in such a situation would make it impossible for the submarine’s crew to test their secretive skills in a given area, overcoming the enemy’s anti-submarine defense. Thus, Surrogate products or other similar systems can positively influence the process of training personnel engaged in anti-submarine defense, but at the same time they have some negative impact on the training of submariners. In the course of the further development of the project and the determination of the methods of applying the new technology, the responsible persons should take into account this feature of the original proposal.

At the moment it is known that the robotized submarine complex "Surrogat", primarily intended for use in the exercises of the Navy, is now at the stage of developing a concept project. Specialists of the development organization are consulting with representatives of the customer, according to the results of which various changes can be made to the original appearance of the equipment. It will take some time to determine the final appearance of the apparatus and the subsequent development of a full-fledged project. In the future, industry and the fleet will have to build and test prototypes of robotic vehicles.

All these stages of the project may take several years, which will affect the timing of the work. Apparently, the tests of promising technology will be able to begin only after a few years, and full-fledged operation will start even later. The exact timing of the emergence of the serial "Surrogates", as well as the likelihood of such a completion of the project, for objective reasons, still remain a mystery.