December 8 2016
68
For the third week in a row, the Russian authorities do not please those foreigners who see Russia not only as a country for the opportunity to find a job with a suitable income, but also for the territory of a “temporary” residence. So, on November 15, the government of the Russian Federation adopted a resolution number 2428-r, setting a quota for issuing permits for temporary residence in the Russian Federation in 2017 to foreigners and stateless persons. This quota is reduced by almost 12% compared to the current year: almost 126 thousands of permits in 2016 year against 110 880, planned for next year.


Of regulations Cabinet of the Russian Federation:
The size of the quota for 2017 year is set on the basis of the received proposals of the executive authorities of the subjects of the Federation, prepared taking into account the migration situation and the economic situation in each specific region.

The decision was aimed at improving the efficiency of regulating migration processes and ensuring the uniform application of legislation on the formation and establishment of quotas for issuing temporary residence permits for foreign citizens and stateless persons in Russia as a whole and for each region.

The tendency to reduce quotas also manifested itself the day before, when the government issued a decree of December 3 No. XXUMX. This document provides for the maximum number of foreign citizens who can enter the territory of Russia on the basis of an entry visa - for the implementation of a particular work activity.

Quotas for 2017 year compared to the current year in this situation are reduced by 17,3%. The total number of those foreigners whom Russian employers expect (we are talking about those who arrive in the Russian Federation on the basis of a visa), should be 177 043 people.

From the resolution:
The need of the economy in attracting foreign workers in priority vocational groups is determined on the basis of proposals from the constituent entities of the Federation.

It is especially noted that we are talking mainly about the need for work and talent of qualified foreign “guest workers”. In other words, the Russian employer increasingly needs professionals in high-tech areas and less and less often - low-skilled workers with whom the market has already been saturated and even overloaded in recent years. 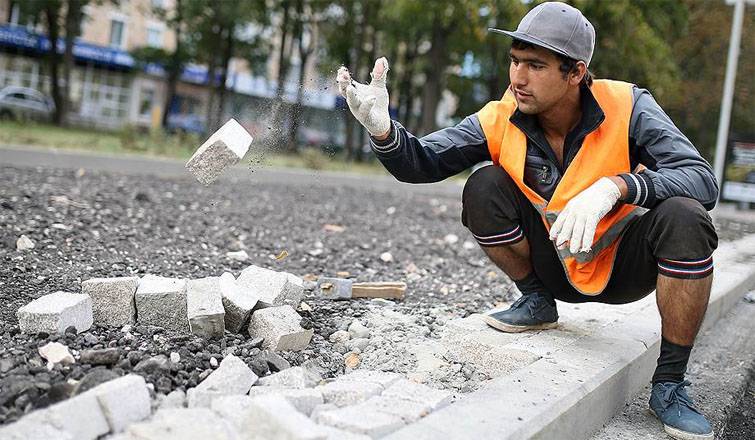 The Cabinet of Ministers determined the demand in qualified foreign personnel at the level of 94,8% of the total number. That is, engineers, medical workers, skilled builders, programmers, designers, specialists in the field of information technologies and mass communications need ten times more than “self-educated” tile workers, painters, carers and cleaning managers.

The resolution clearly defines the specific purposes for which the Russian economy may require qualified foreign specialists. From the document:
The decisions made will allow employers to meet the demand for qualified foreign workers, to implement investment projects, including the preparation for holding the FIFA 2017 Football Cup in Russia and the FIFA 2018 Football World Cup in Russia.

The new document is quite remarkable. If earlier Russia kept the “doors” actually open for labor migrants from various countries with any qualifications of these migrants or in the complete absence of such, now the labor market of foreign citizens is relatively clearly regulated. In other words, if the quota for unskilled labor migrants is exceeded, then those will be deported.

In this regard, the question arises: how is it going to deal with labor migrants from countries, for example, the Eurasian Economic Union and the CIS? If we talk about migrant workers from the EEU, then the palm with a large margin in the number of unskilled workers takes Kyrgyzstan. It is this country of the Eurasian Economic Union that “delivers” into the Russian cities of migrant workers, the economic need for a large number of which is controversial. The reason is clear here - the low standard of living in Kyrgyzstan against the background of indicators of other EAEU republics.
A low standard of living pushes citizens of Tajikistan and Uzbekistan to work in Russia, who do not need a visa to cross Russian borders and who (from among those arriving in Russia) are “not burdened” with a higher education engineering or other required specialty. However, by reducing the temporary residence quota, the Russian regulatory authorities bring to the notice of “visa-free” foreigners that the old “freebie” is coming to an end. This leads, firstly, to the fact that the flow of labor migrants from the same Uzbekistan to the Russian Federation will in any case dry up (based on the quotas presented), and secondly, to an understanding of the possibility of an increase in the number of illegal immigrants in the territory of the Russian Federation.

It is quite clear that a person who arrived from the solar "... camp" to look for work in Moscow and, as they say, who smelled money, would hardly accept the fact that he does not fit in terms of quotas or the level of professional qualifications. Such foreign citizens will try to do everything in order not to appear again, as in the film, “in their native village, where they would like to see Comrade Lenin”. And, considering the fact that the Russian market is full of various offices offering guest workers to “legalize” for a certain amount, even if this “legalization” goes against the requirements of government agencies, the problem is really serious. And not all those who resort to the corruption variant of “legalization” remain in the Russian Federation exclusively for honest work ... Those who go into so-called ethnic crime are enough.

Thus, according to the deputy head of the Criminal Investigation Department of the State Ministry of Internal Affairs in the city of Moscow, more than 70% of crimes of a sexual nature against women in the capital are committed by visitors from the countries of Central Asia. It is noteworthy that such statistics has remained almost unchanged over the past few years.

An attempt to go beyond the law by those who decided to stay at any price in the Russian Federation (for a certain period of time) also resonates with other criminal communities offering certain types of “services”. Thus, on the eve of Moscow, law enforcement officers after receiving information from representatives of the E unit of the Ministry of Internal Affairs and the Federal Security Service conducted a series of detentions. The total number of detainees in different parts of the capital is 25 people, the overwhelming majority of whom are “guests” from the republics of Central Asia, including those with fake passports. According to preliminary information, they are suspected of extremist activity, as well as of links with groups whose activities are prohibited in the territory of the Russian Federation.

A considerable number of representatives of such cells, who at one time entered the Russian territory as ordinary guest workers, “wake up” with time, activating their activities, for example, in social networks. The most frequent objects of attention are young people (citizens of the Russian Federation), who through influence through the network can be involved in criminal (terrorist, pseudo-religious) communities to promote the interests of foreign curators. A part of yesterday’s “guest workers” is being turned into emissaries of terrorist groups, and some into cannon fodder of structures of international terrorism. According to law enforcement, over the past year, more than 400 citizens of Kyrgyzstan across the territory of Russia, and then Turkey, moved to Syria and Iraq, where they joined illegal armed groups, having understood this very “labor” vocation ...

It would be desirable to hope that a more balanced legislation in the field of labor relations with foreign citizens will allow to impose a certain order in this field. Otherwise, the Ministry of Labor will only make a headache for itself and export it to various law enforcement agencies.